Accessibility links
Cave Painting In Indonesia Is Oldest Known Work Of Figurative Art In a cave in Indonesia, archaeologists have uncovered a stunning ancient painting of a hunting party that is thousands of years older than similar works found in Europe. 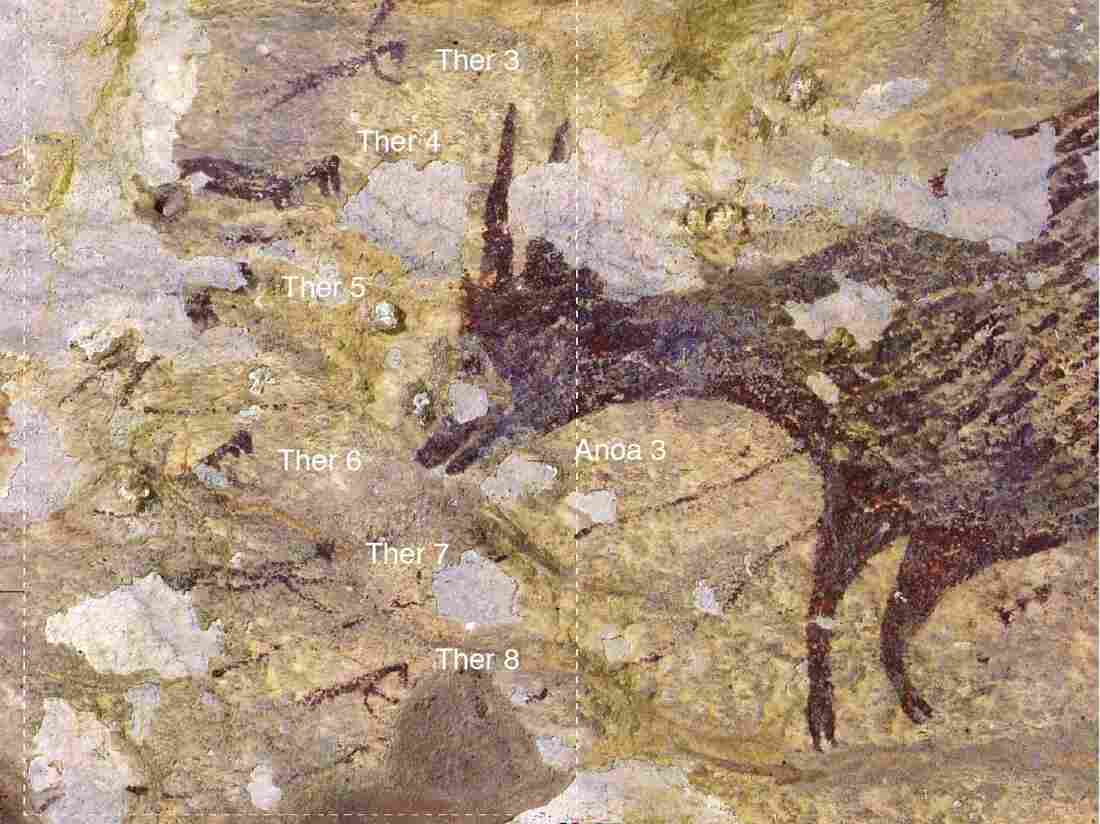 The scene found in Indonesia shows, among other things, hunters confronting a wild buffalo with ropes and spears. Adam Brumm/Nature hide caption 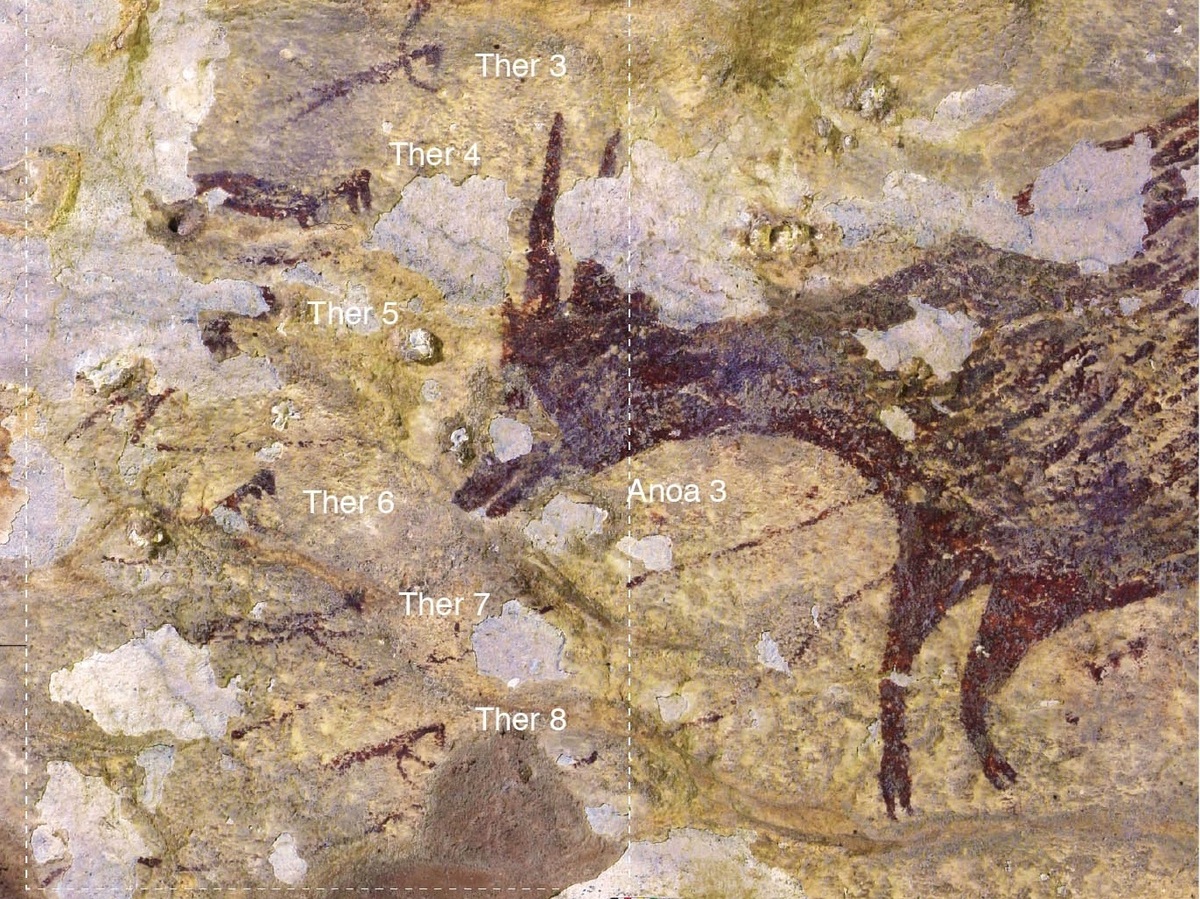 The scene found in Indonesia shows, among other things, hunters confronting a wild buffalo with ropes and spears.

Scientists say they have found the oldest known figurative painting, in a cave in Indonesia. And the stunning scene of a hunting party, painted some 44,000 years ago, is helping to rewrite the history of the origins of art.

Until recently, the long-held story was that humans started painting in caves in Europe. For example, art from the Chauvet Cave in France is dated as old as 37,000 years.

But several years ago, a group of scientists started dating cave paintings in Indonesia — and found that they are thousands of years older.

"They are at least 40,000 years old, which was a very, very surprising discovery," says Adam Brumm, an archaeologist at Australia's Griffith University. He and his colleagues used a technique called uranium-series analysis to determine the paintings' age. The oldest figurative painting in those analyses was a striking image of a wild cow.

These works had been known for years by locals on the island of Sulawesi — but Brumm adds that "it was assumed they couldn't be that old."

Since that big reveal, Brumm's team — which he led with archaeologists Maxime Aubert and Adhi Agus Oktaviana — has been searching for more art in these caves. In 2017, they found something breathtaking — the massive hunting scene, stretching across about 16 feet of a cave wall. And after testing it, they say it's the oldest known figurative art attributed to early modern humans. They published their findings in the journal Nature.

The painting tells a complicated story. It depicts jungle buffaloes and wild pigs pursued by tiny hunters with spears and ropes. 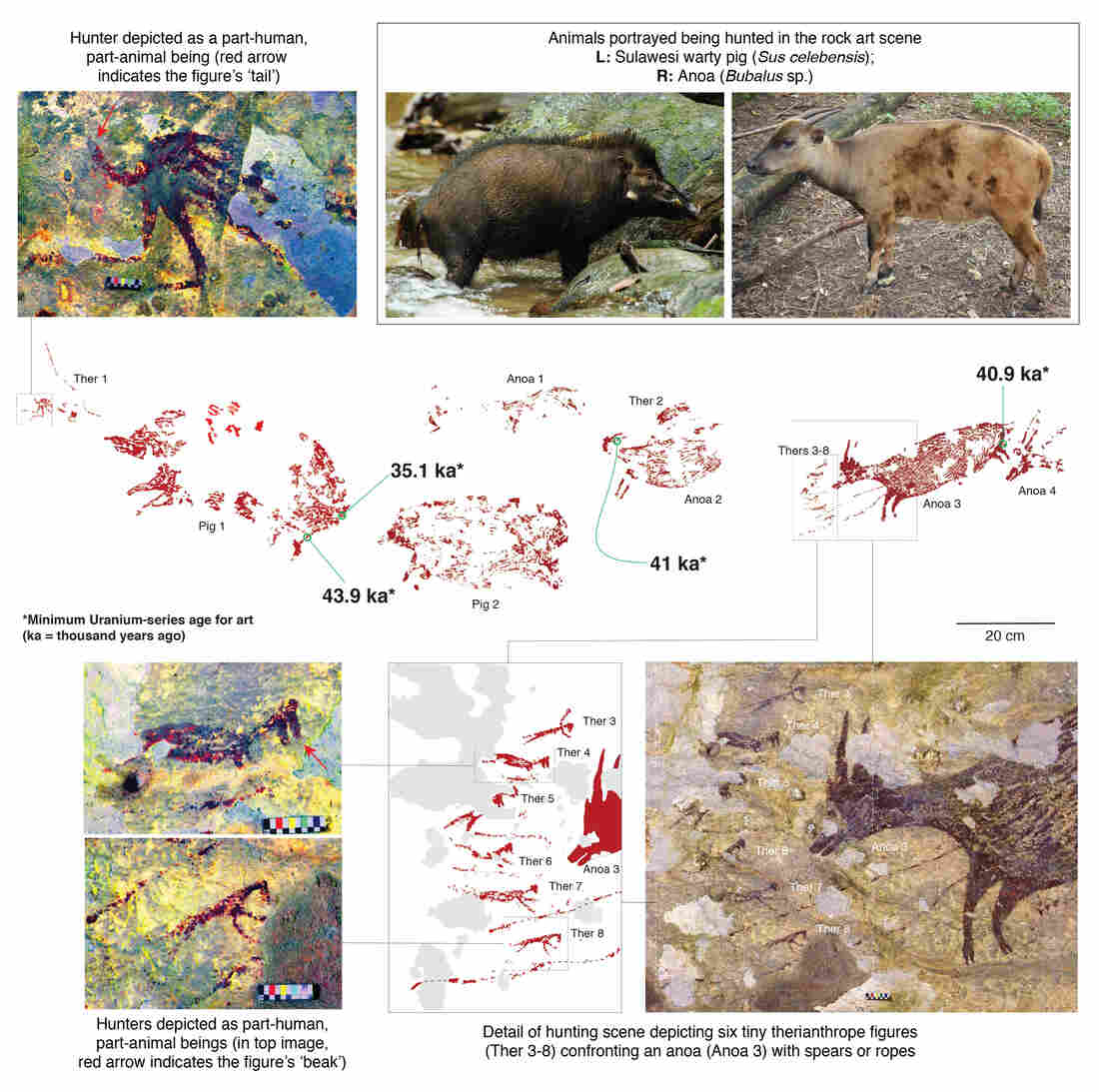 The painting found on the island of Sulawesi depicts a complex scene of a hunting party. Adam Brumm/Nature hide caption 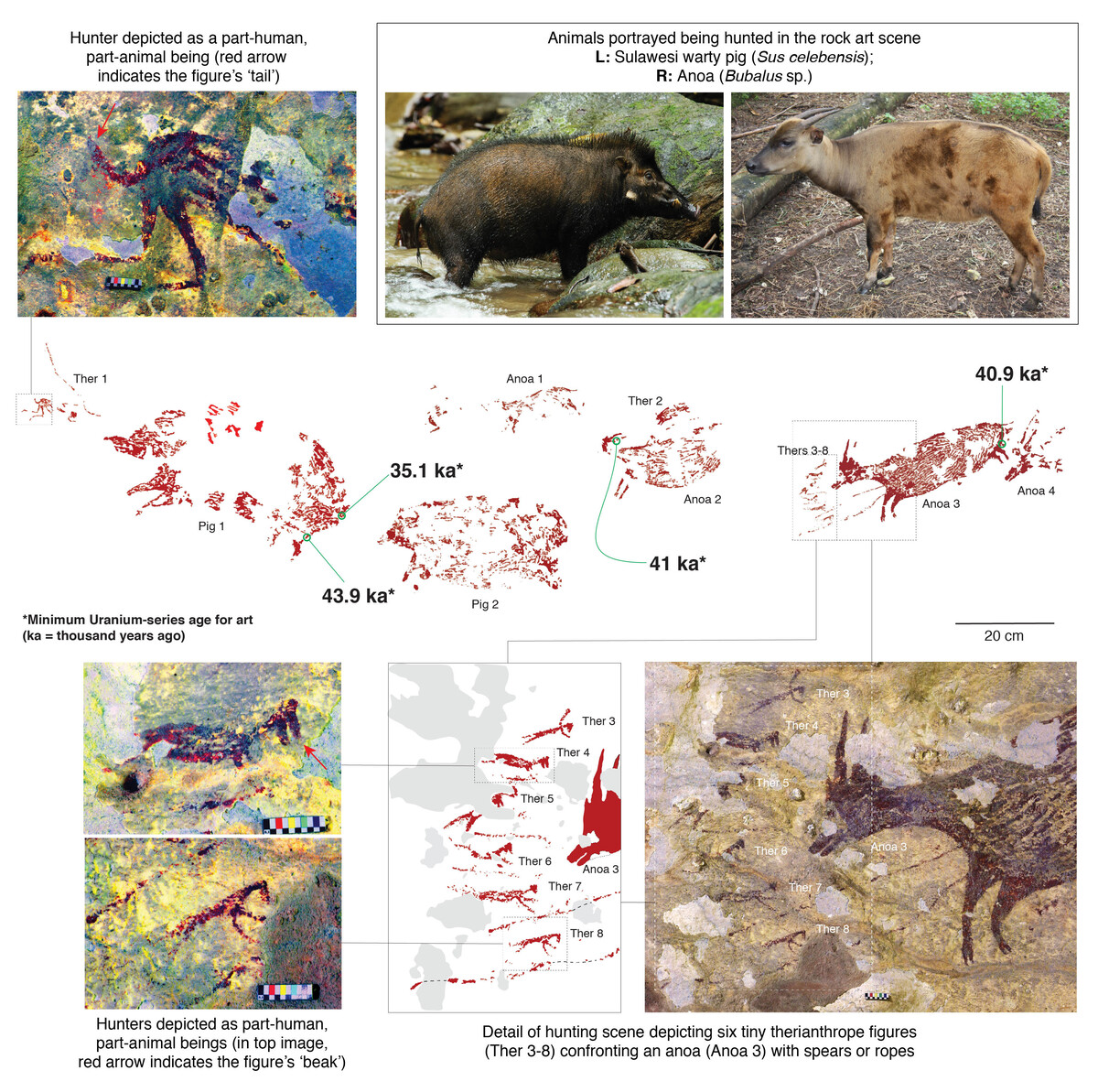 The painting found on the island of Sulawesi depicts a complex scene of a hunting party.

"They appear to be human, but they seem to have some features or characteristics of animals," Brumm says. One appears to have a birdlike head, and another has a tail. He says these part-human, part-animal figures might signal early religious beliefs, because they indicate that ancient humans could imagine things they had never seen.

"We can't know if it has anything to do with spirituality, but at least we can say that those artists were capable of the sorts of conceptualizations that we need in order to believe in religion, to believe in the existence of the supernatural," he says.

Brumm says discoveries in Asia have complicated what we know about when — and where — humans started to make figurative art. There are some older examples of humans making simpler markings, like zigzags or circles.

"I think the discoveries that have been emerging over the last few years is suggesting that our understanding of the human story, that key part of the human story, is still being revised as we speak and there could be some big changes in store," he adds.

Genevieve von Petzinger, a paleoanthropologist at the University of Victoria, says the discoveries in her field are happening very quickly, thanks to newer technology such as the technique used to date the hunting scene. "I think the overall theme here really is that we've vastly underestimated the capacity of our ancestors," she says.

She says the oldest cave paintings in Europe and Asia have common elements. And she thinks that even older paintings will eventually be found in the place where both groups originated from.

"Personally, I think that our ancestors already knew how to do art before they left Africa," von Petzinger says.

While not everyone in the field agrees, and no figurative cave art in Africa has been dated older than the Indonesian works, Brumm says he has the same gut feeling.

But even as Indonesia is emerging as an important location for early art, the paintings are rapidly deteriorating and the scientists don't know why. "It is such a huge and important part of the human story. Yet it's literally crumbling away before our eyes," Brumm says.

Brumm and his colleagues are trying to figure out the cause of the problem. He says one theory is that higher temperatures in the caves due to climate change are harming the art.

Brumm says the deterioration — in one case, by about an inch every two months — is making their work to survey these sites feel particularly urgent. "Who knows what other amazing cave art is out there at some site that can change our understanding of human evolution?"