Accessibility links
Impeachment Hearing Livestream: Debate On Articles Of Impeachment The committee convened to mark up the legislation that the House would use to impeach President Trump, possibly by Christmas. 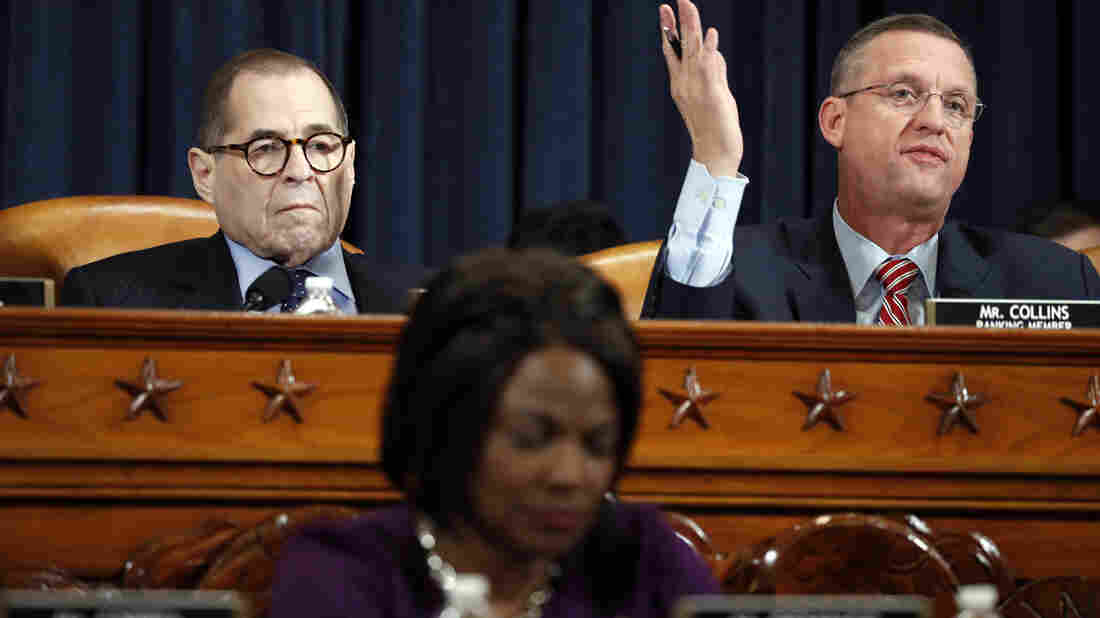 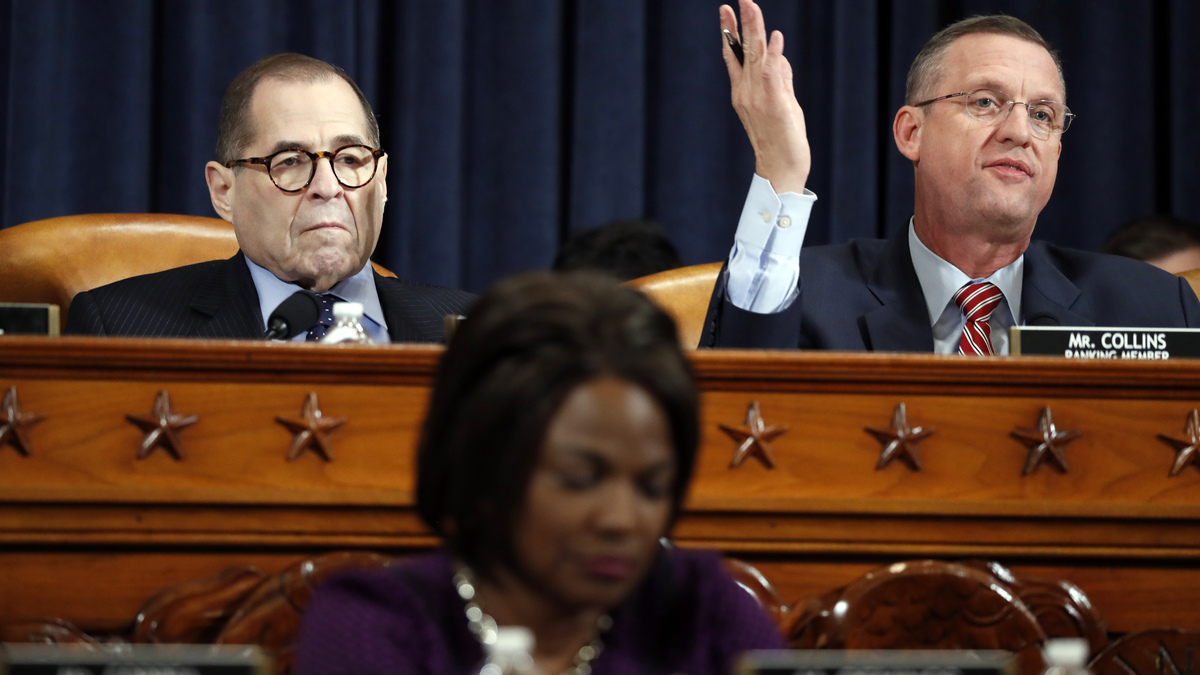 House Democrats began work on completing their articles of impeachment against President Trump Wednesday evening, setting the stage for a vote by the full House.

The Judiciary Committee convened to amend the impeachment legislation introduced Tuesday by House Speaker Nancy Pelosi, D-Calif., with its chairman, Jerry Nadler, D-N.Y., calling the facts against Trump "overwhelming" and that Congress must act now to protect the integrity of U.S. election and its national security.

Wednesday's hearing included only opening statements from 40 members on the committee, and with each given five minutes to speak took just over three and a half hours. The hearing will continue Thursday morning at 9 a.m. ET followed by a committee vote.

Democrats defended the decision to ultimately make two charges against Trump: that he abused his power in the Ukraine affair and that he obstructed Congress. Read the articles of impeachment here.

Many of the majority members used their time to frame the decision of whether or not to impeach a president as one critical to the health of the democracy, with many telling personal stories about what the freedoms enshrined in the Constitution meant to them.

"If our elections are corrupt, everything is corrupt," Nadler said, adding that moving forward even so close to 2020 voting was justified because "we cannot rely on an election to solve our problems when the president threatens the very integrity of these elections."

Nadler argued that the first article, dealing with abuse of power, was the "highest of high crimes" as defined in the Constitution, and that obstruction of Congress threatened the country's systems of government.

"If the president can first abuse his power and then stonewall all congressional requests for information, Congress cannot fulfill its duty to act as a check and balance against the executive—and the president becomes a dictator," Nadler said.

Republicans vociferously pushed back, as they have throughout the hearings, calling impeachment a farce based on flimsy evidence and arguing that Democrats have been trying to remove Trump since he won. They also blasted the process Democrats have used to get here and argued that minority concerns were squashed.

"We have been on this path since November 2016," said ranking member Doug Collins, R-Ga. "The only thing that's changed is your desire to impeach the president when you became the majority."

Complaining that Democrats have "lost all moorings of fairness and good taste," Collins said that impeaching Trump will damage the very legislative body they represent.

But Democrats pushed back. Rep. Karen Bass, D-Calif., said it was "irresponsible to label a constitutional process a coup."

"The world is waiting to see if we hold ourselves to the democratic principles we tell others to hold," Bass said.

And Rep. Hank Johnson, D-Ga., said he wasn't even convinced of the necessity of impeachment until recently.

"I was born when Jim Crow was alive and well," the African American lawmaker said. "To me the idea that elections can be undermined is not theoretical."

This markup process involves proposed changes by committee members to the text of the bill before a vote on whether to refer the measure to the full House.

This week marked only the fourth time that articles of impeachment have been introduced against a president, and if the House votes to pass them, it would be only the third such instance in the history of the country.

What remains unclear is exactly when this work might wrap up either at the committee level or before the full House. A second session is expected on Thursday at 9 a.m. ET.

Members had debated whether to make a broader case, including, for example, one that might have invoked the findings of former Justice Department special counsel Robert Mueller — many Democrats argue he documented obstruction of justice by the president.

In the end, lawmakers agreed to allude to Mueller and the Russia investigation but stick with two articles of impeachment centered on the Ukraine affair.

"I think you will find the pillars of all of the information that we secured over a two year period is reflected in particular by references to patterns of behavior," said Rep. Sheila Jackson Lee, D-Texas.

Trump and the White House reject the premise of impeachment out of hand.

Impeachment is a quasi-legal but mostly political process and yields the rough equivalent of an indictment — a statement by the House that it considers there to be enough evidence of Trump's wrongdoing to trigger a trial in the Senate.

Not censuring Trump also could result in another problematic presidential election, Schiff warned.

Democrats invoked Trump's invitation for Russia to find Hillary Clinton's emails in 2016 and his request this year that the government of Ukraine launch two investigations Trump thought might help him in 2020 — the heart of the Ukraine affair.

Ultimately, Ukraine's government did not agree to announce those investigations, but Schiff said Trump has made clear that he wants foreign governments to get into American politics and that affects whether voters can trust the results of the coming year's election.

The White House sought to bolster Trump's election security credentials on Tuesday evening in a statement about his meeting with Russian Foreign Minister Sergey Lavrov.

"President Trump warned against any Russian attempts to interfere in United States elections and urged Russia to resolve the conflict with Ukraine," the White House said.

Republicans control the Senate and are expected to acquit Trump in the event of an impeachment trial.

Senate Majority Leader Mitch McConnell, R-Ky., has said he would convene a trial as described in the Constitution and has suggested it might take place in January, although no date has been set.

Senate Republicans are negotiating among themselves and with Trump as to how an impeachment trial might proceed.

The president and Republicans disagree, for example, about how quickly to move — whether to quickly resolve impeachment and move ahead or whether to use the spectacle in the Senate for their own political ends, including for criticism of Vice President Joe Biden.