Accessibility links
Myanmar's Suu Kyi Denies Charges Of Genocide Against Rohingya Minority The International Court of Justice is considering whether to grant a provisional measure that would protect Rohingya still living in Myanmar's Rakhine state. 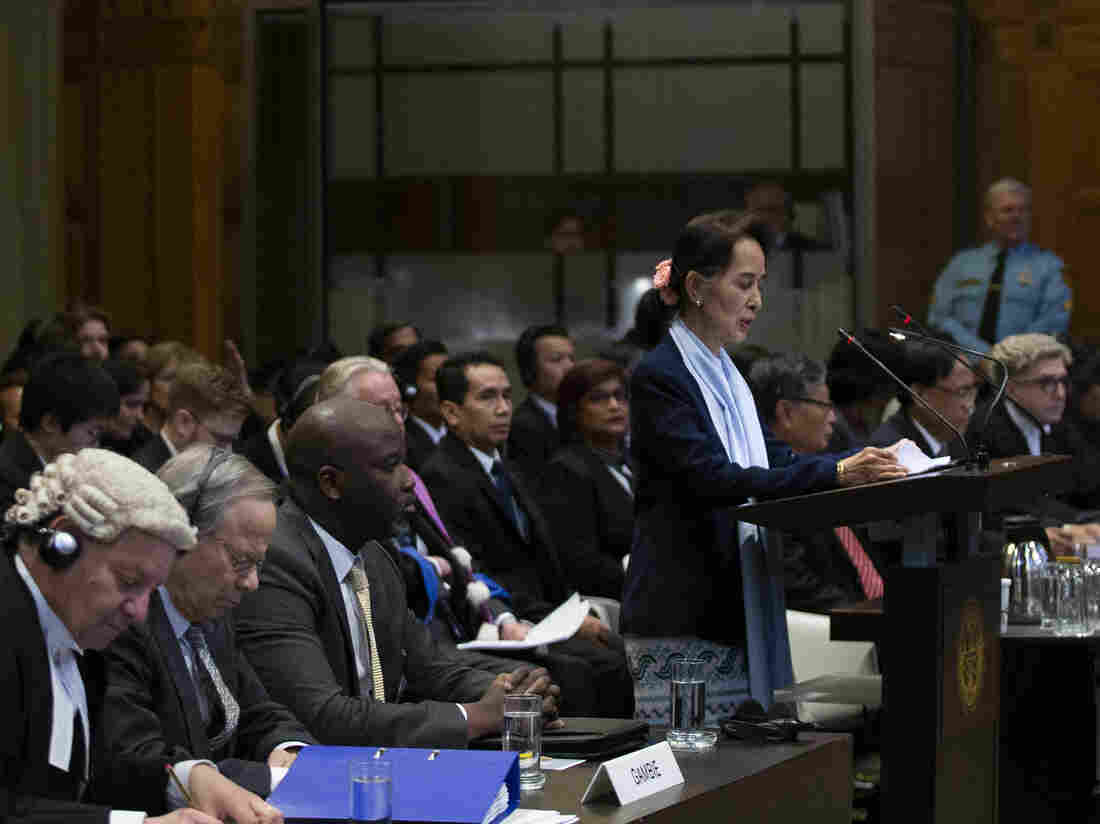 Myanmar leader Aung San Suu Kyi addresses judges of the International Court of Justice on the second day of hearings in The Hague, Netherlands, on Wednesday. Peter Dejong/AP hide caption 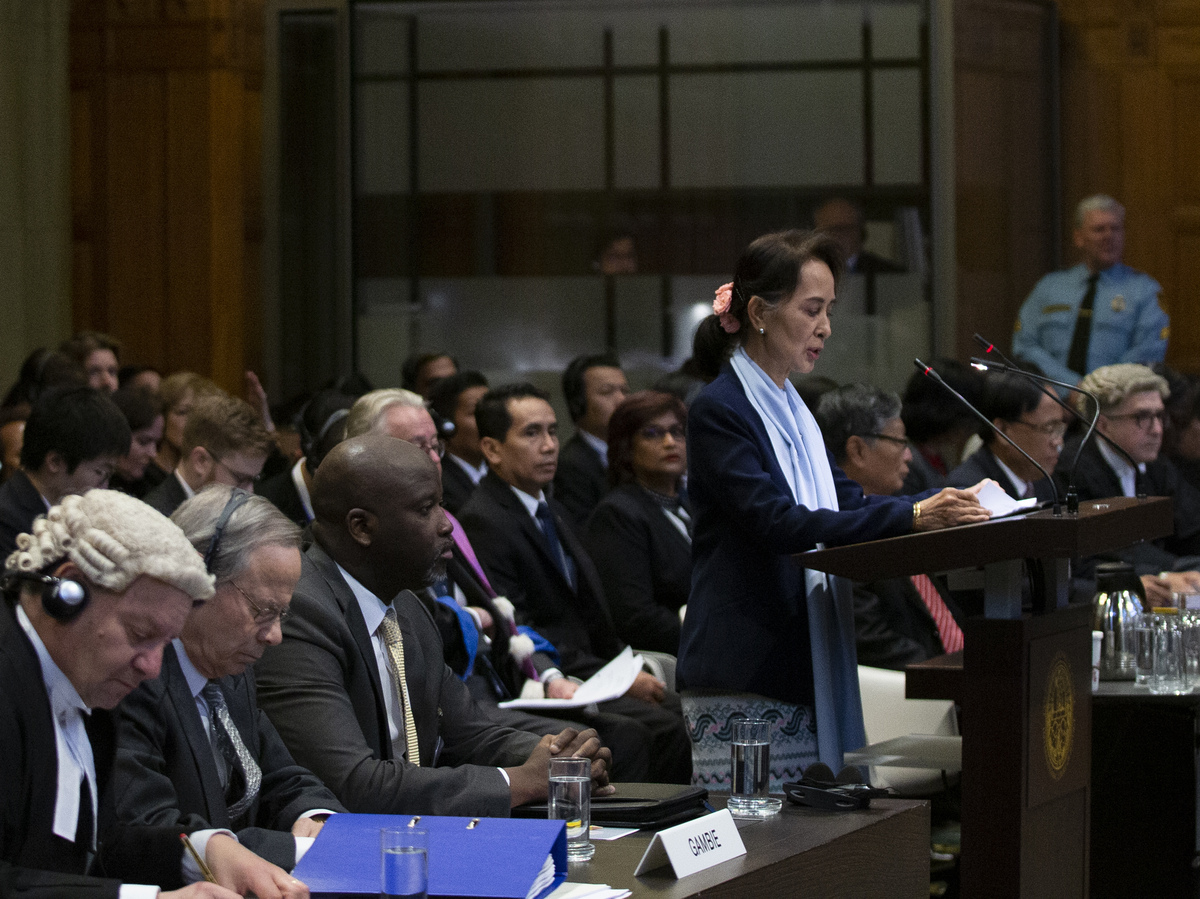 Myanmar leader Aung San Suu Kyi addresses judges of the International Court of Justice on the second day of hearings in The Hague, Netherlands, on Wednesday.

But on Wednesday, Suu Kyi had her turn at the microphone, where she vigorously defended her country's government against accusations of genocide.

"The situation in Rakhine state is complex and not easy to fathom," she told a 17-judge panel of the International Court of Justice in The Hague, referring to the region where the brutal crackdown carried out by Myanmar's military has been centered.

This week, the International Court of Justice is considering whether to grant a provisional measure aimed at protecting Rohingya still living in Myanmar's Rakhine state. The tiny Muslim-majority nation of Gambia brought the case against Myanmar, which is accused of violating the 1948 convention against genocide. The ICJ has in the past confirmed that all member states have the duty to prevent genocide.

The U.N. estimates that 10,000 Rohingya have been killed in the crackdown.

Suu Kyi, a Nobel laureate once lauded as a defender of human rights, has faced mounting criticism that she stood by as nearly a million Rohingya were forced to flee to neighboring Bangladesh.

She is one of the first national leaders to respond to a claim directly before the court. Under the International Court of Justice's immense stained-glass windows and intricate chandeliers, Suu Kyi told the panel of judges that Myanmar's military was merely dealing with an internal armed conflict when soldiers responded to "coordinated and comprehensive attacks" by militants in the region.

Suu Kyi says a 2016 attack on local police by the Arakan Rohingya Salvation Army, a militant group, triggered the response by Myanmar's military.

"It cannot be ruled out that disproportionate force was used by members of the defense services in some cases, in disregard of international humanitarian law, or that they did not distinguish clearly enough between ARSA fighters and civilians," she told the court.

Suu Kyi argued that Gambia does not have enough evidence to lodge charges of genocide and pledged that anyone who committed war crimes would be held accountable through Myanmar's own military justice system.

"Please bear in mind this complex situation and the challenge to sovereignty and security in our country when you are assessing the intent of those who attempted to deal with the rebellion," she said. "Surely, under the circumstances, genocidal intent cannot be the only hypothesis."

She continued: "There will be no tolerance of human rights violations in Rakhine or elsewhere in Myanmar. No stone has been left unturned to make domestic accountability work." 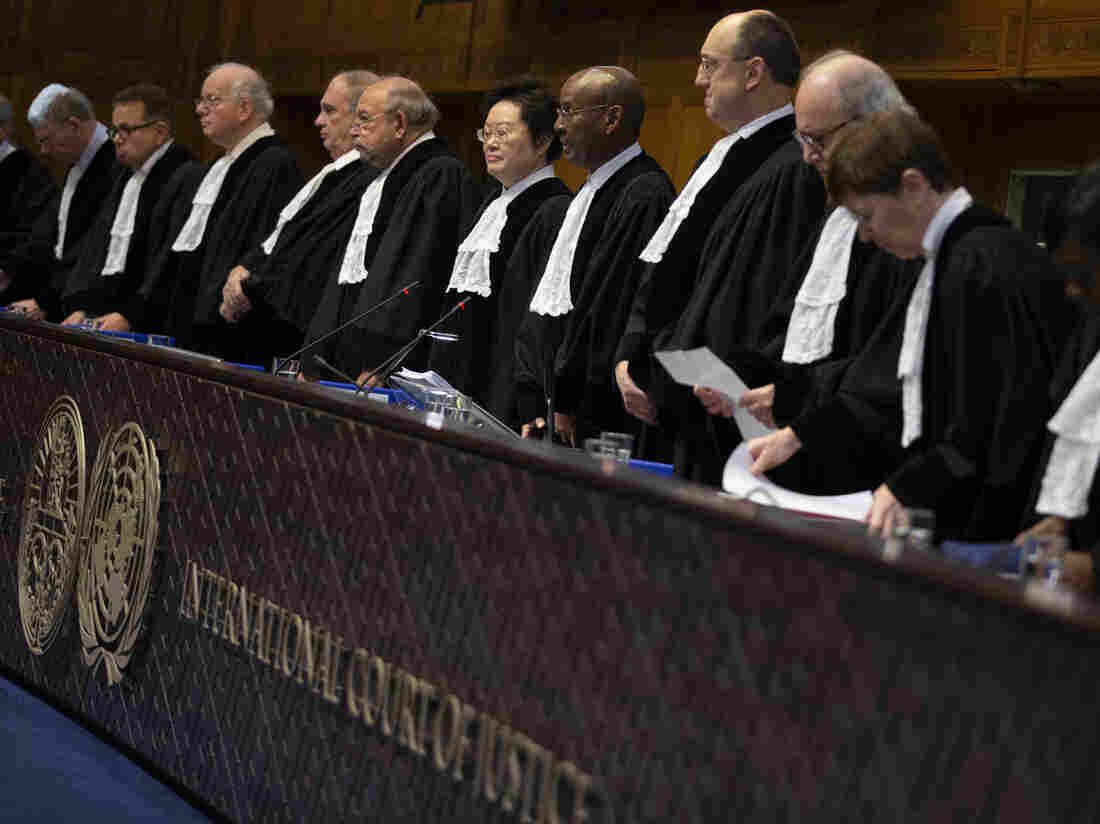 Judges in The Hague open the second day of hearings in the case alleging genocide by Myanmar. Peter Dejong/AP hide caption 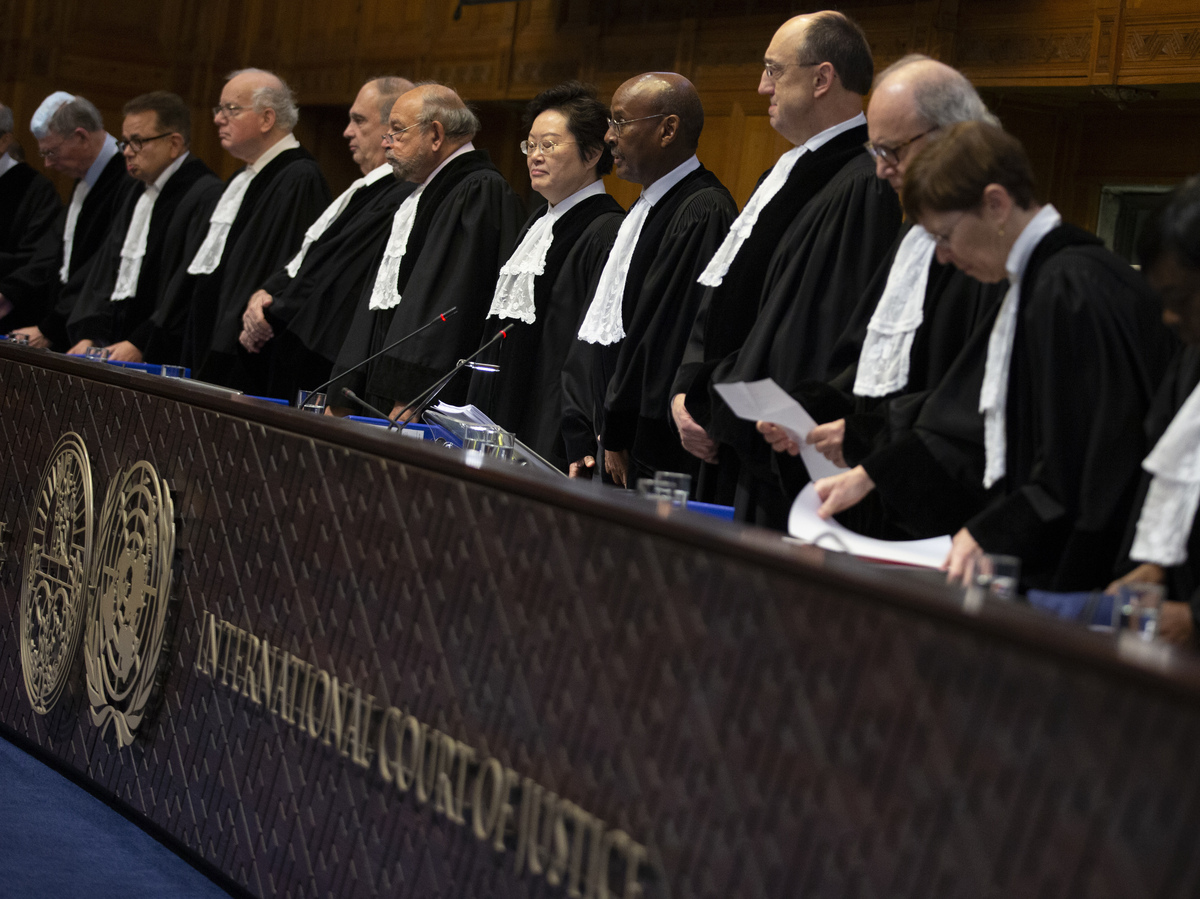 Judges in The Hague open the second day of hearings in the case alleging genocide by Myanmar.

Suu Kyi's assessment of what happened in Rakhine state contrasted starkly with the case made by Gambia a day earlier.

Lawyers and experts representing the West African nation described victims being forced inside houses that were intentionally set on fire; soldiers specifically targeting children, including infants and babies; and satellite images showing an entire Rohingya village destroyed, while a nearby non-Rohingya village was left untouched.

Gambia's justice minister, Abubacarr Marie Tambadou, who spent more than a decade prosecuting cases related to Rwanda's 1994 genocide and is one of the officials presenting Gambia's case, told the court that he visited Rohingya refuge camps in Bangladesh in 2018.

"When I looked into the eyes of those refugees as they recounted their devastating stories, I could see the looks of fear, of despair, of desperation, and of destruction," he told the court. "The looks of victims of a modern-day genocide. And so we asked the question WHY? Why is the world standing by and allowing such horrors again in our lifetime?"

"The exodus of more than three quarters of a million people from their homes and country was nothing but the result of an orchestrated campaign of murder, rape and terror," Amnesty International wrote in a statement.

"To suggest that the military 'did not distinguish clearly enough between fighters and civilians' defies belief," Amnesty said. "Likewise, the suggestion that Myanmar authorities can currently and independently investigate and prosecute those suspected of crimes under international law is nothing but a fantasy, in particular in the case of senior military perpetrators who have enjoyed decades of total impunity."

As NPR's Michael Sullivan has reported, Suu Kyi's unprecedented appearance before the International Court of Justice is likely aimed in part at shoring up domestic support ahead of elections next year. Crowds of well-wishers waving "We Stand With Our Leader" signs cheered Suu Kyi as she left Myanmar for the Netherlands over the weekend. 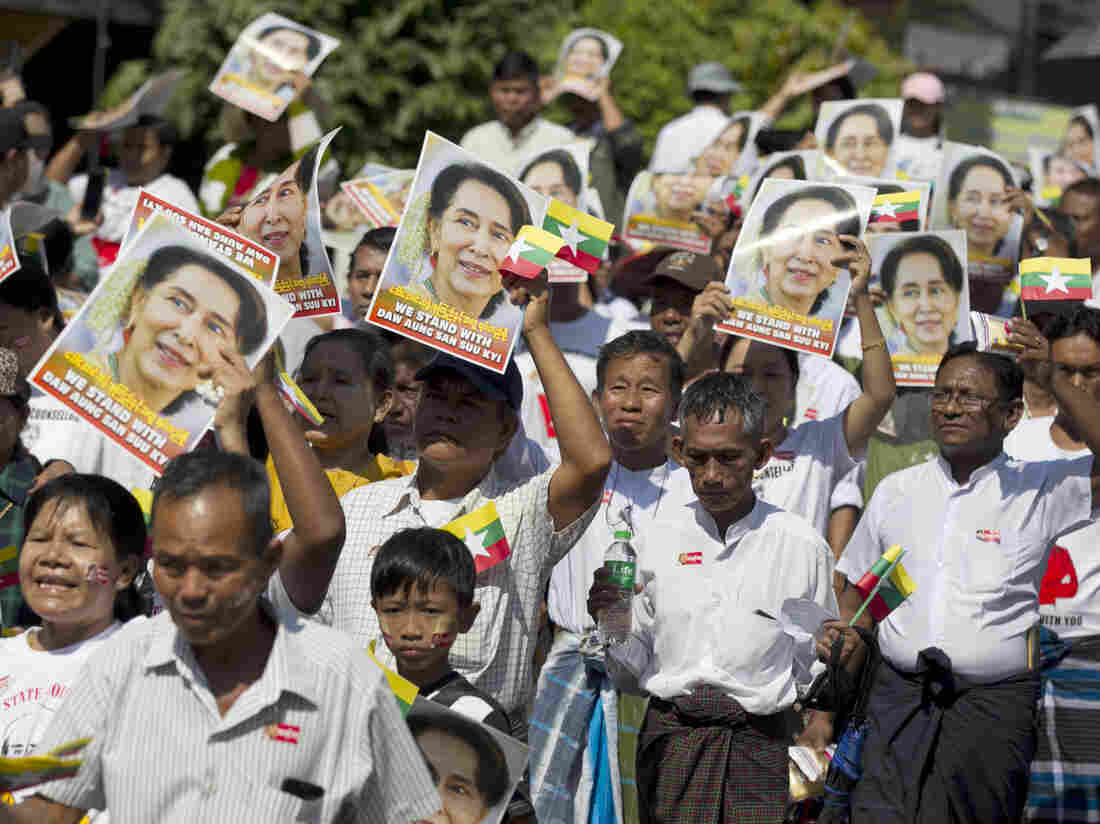 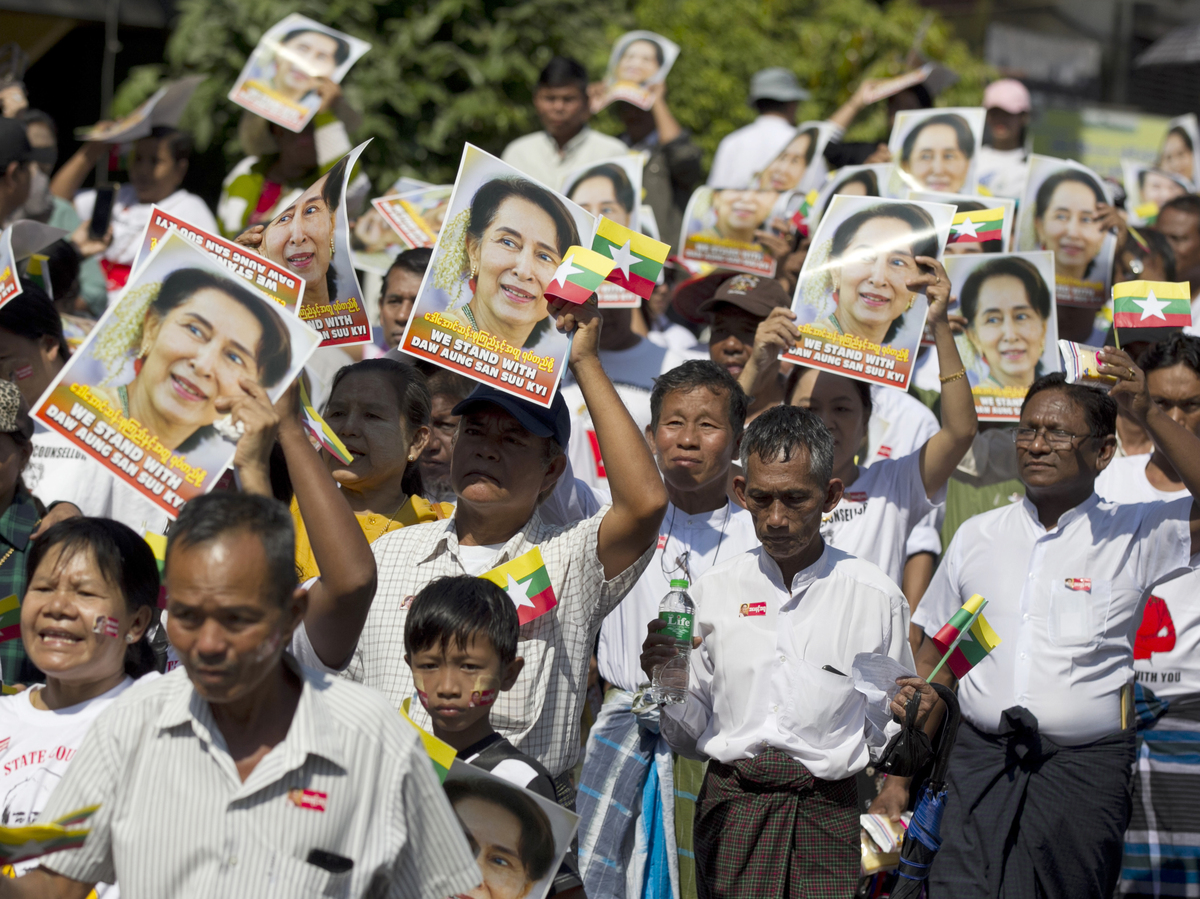 In Myanmar, Rohingya watched livestreams of the hearing on smartphones, The Washington Post reported.

"The government has no shame," 23 year-old Ro Nur Deen told the Post. "They have no transparency and no accountability, but finally, we are excited that the world can see the truth at the ICJ."

Gambia's legal team told the court that after the crackdown that forced so many to cross the border, an estimated 600,000 Rohingya remain in Myanmar, citing a recent U.N. fact-finding mission that concluded they "remain under serious risk of genocide."

If the judges side with Gambia, the court would order Myanmar to immediately "take all measures within its power to prevent all acts that amount to or contribute to the crime of genocide."

A decision is expected within weeks or months, while a formal ruling of whether Myanmar committed genocide could take years.

"You are called upon to act now," Philippe Sands, a specialist in international law and a member of Gambia's legal team, told the court. "This court is the ultimate guardian of the Genocide Convention," he told the court. "It is on you that the eyes of the world are turned."