Accessibility links
In Pakistan, Angry Mob Of Lawyers Attacks Hospital, Causing Deaths Of 3 Patients The lawyers were apparently angered by a now viral incident at the hospital in which an attorney was beaten by doctors after he refused to wait in line at the cardiac facility. 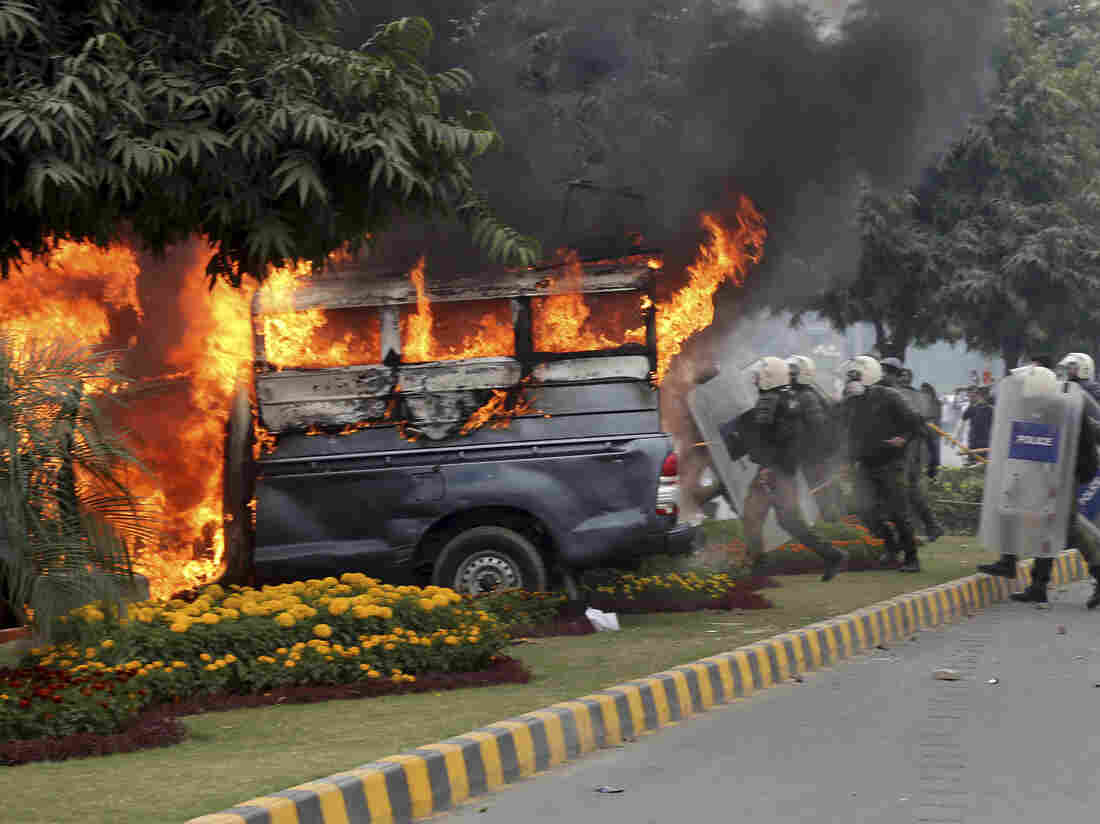 Police officers gather next to a burning police vehicle set on fire by angry lawyers during clashes in Lahore, Pakistan, on Wednesday. K.M. Chaudary/AP hide caption 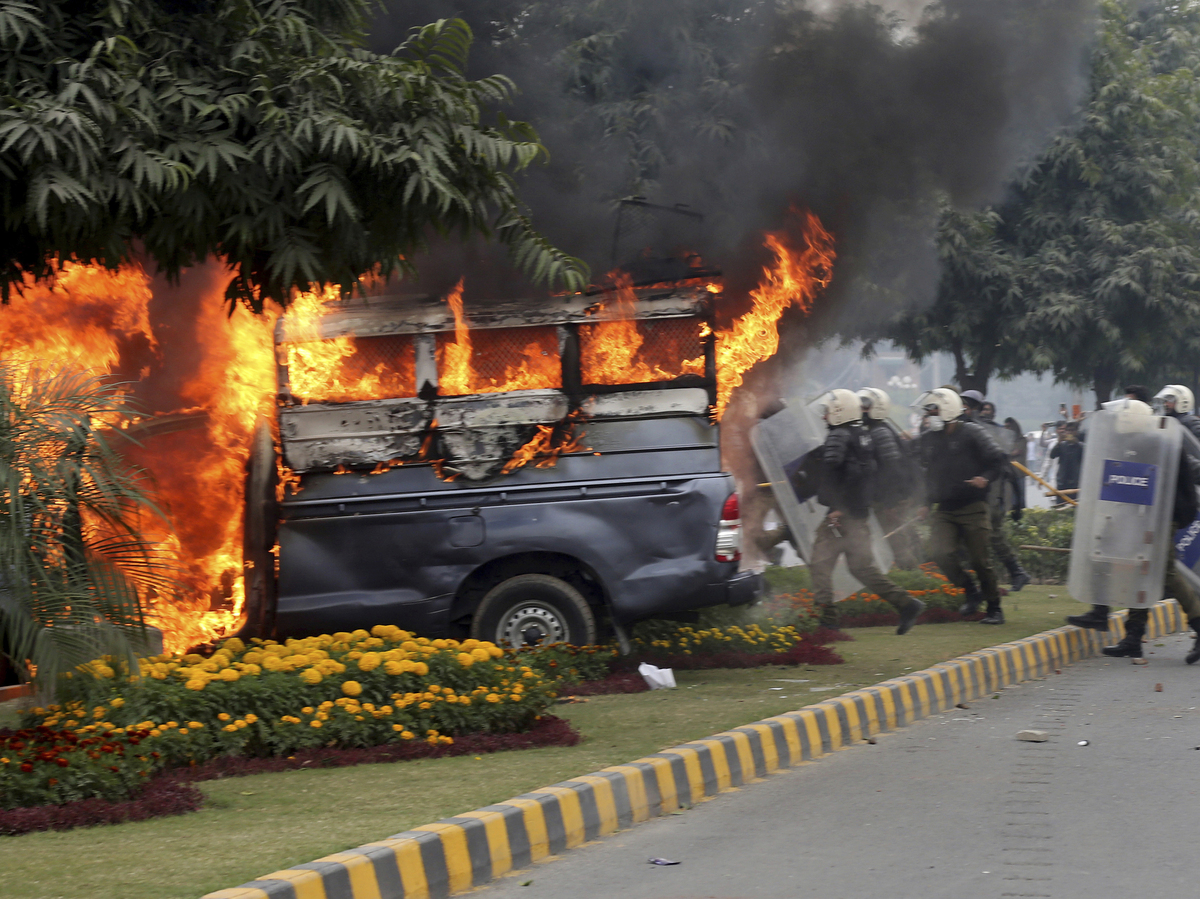 Police officers gather next to a burning police vehicle set on fire by angry lawyers during clashes in Lahore, Pakistan, on Wednesday.

At least three patients died on Wednesday after hundreds of lawyers besieged a cardiac hospital in Lahore, Pakistan, for hours — attacking doctors, guards and other staff and setting several vehicles ablaze, officials said.

The origins of the clash are not entirely clear, but it seems to stem from a scuffle last month between doctors and a lawyer that was captured on surveillance video. Since then, lawyers have been demanding some kind of action against the doctors, and on Wednesday that culminated in the brutal attack.

Reuters reported, "lawyers were particularly angry about the doctors disseminating a mobile phone video on social media showing the beating" of a lawyer by doctors after he refused to wait in line.

"Due to the thrashing of doctors going on, the staff fled the scene," Rashid said, adding that it was their abandonment that led to the fatalities.

"It could not have been more shameful than this. I regret that they did not even pause to think about what they were doing. They were so enraged that all reasoning had just left them," she said, referring to the mob.

Members of the mob, dressed primarily in dark suits, white shirts and black ties, and armed with sticks, beat hospital employees, damaged hospital equipment and smashed the doors of emergency theaters. Some fired gunshots, torched hospital and police vehicles and blocked the entry of arriving ambulances. According to some reports, it took police at least a couple of hours to respond to the chaos that erupted after a protest outside the Punjab Institute of Cardiology turned violent.

Some patients were transferred out of the hospital as angry lawyers vandalized the facility. 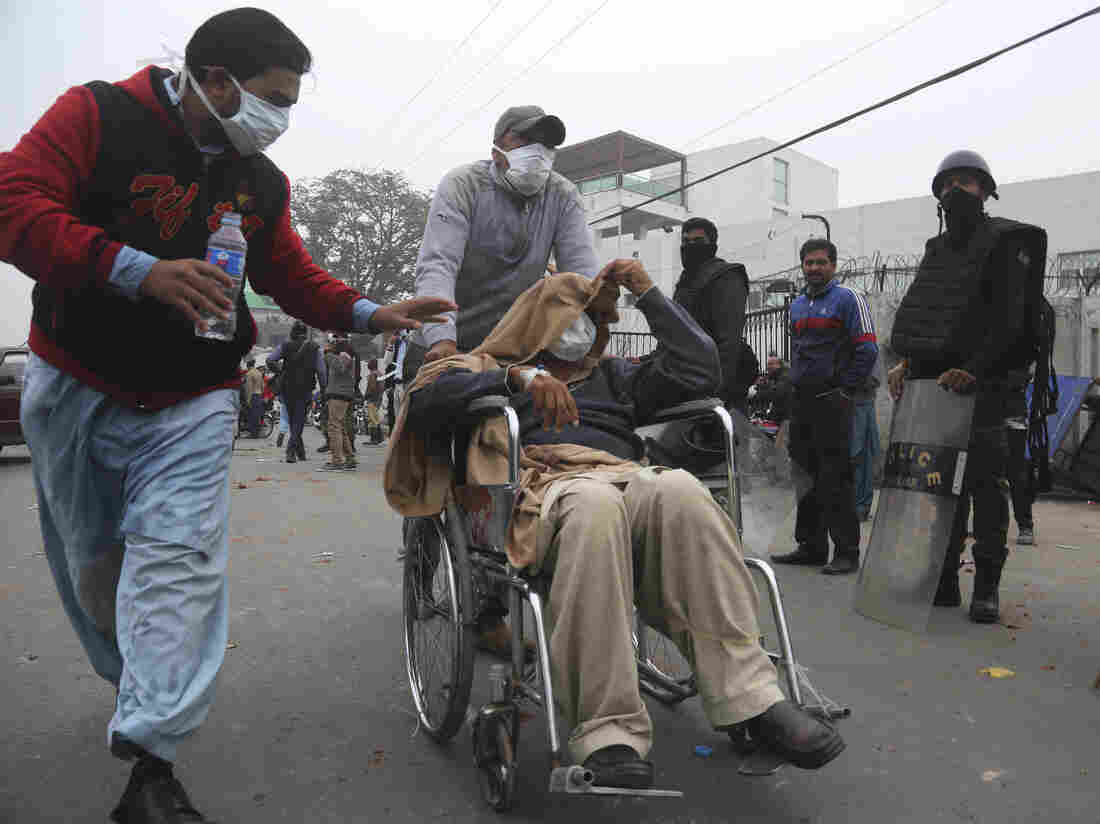 A patient is transferred after angry lawyers staged an attack on the Punjab Institute of Cardiology on Wednesday. K.M. Chaudary/AP hide caption 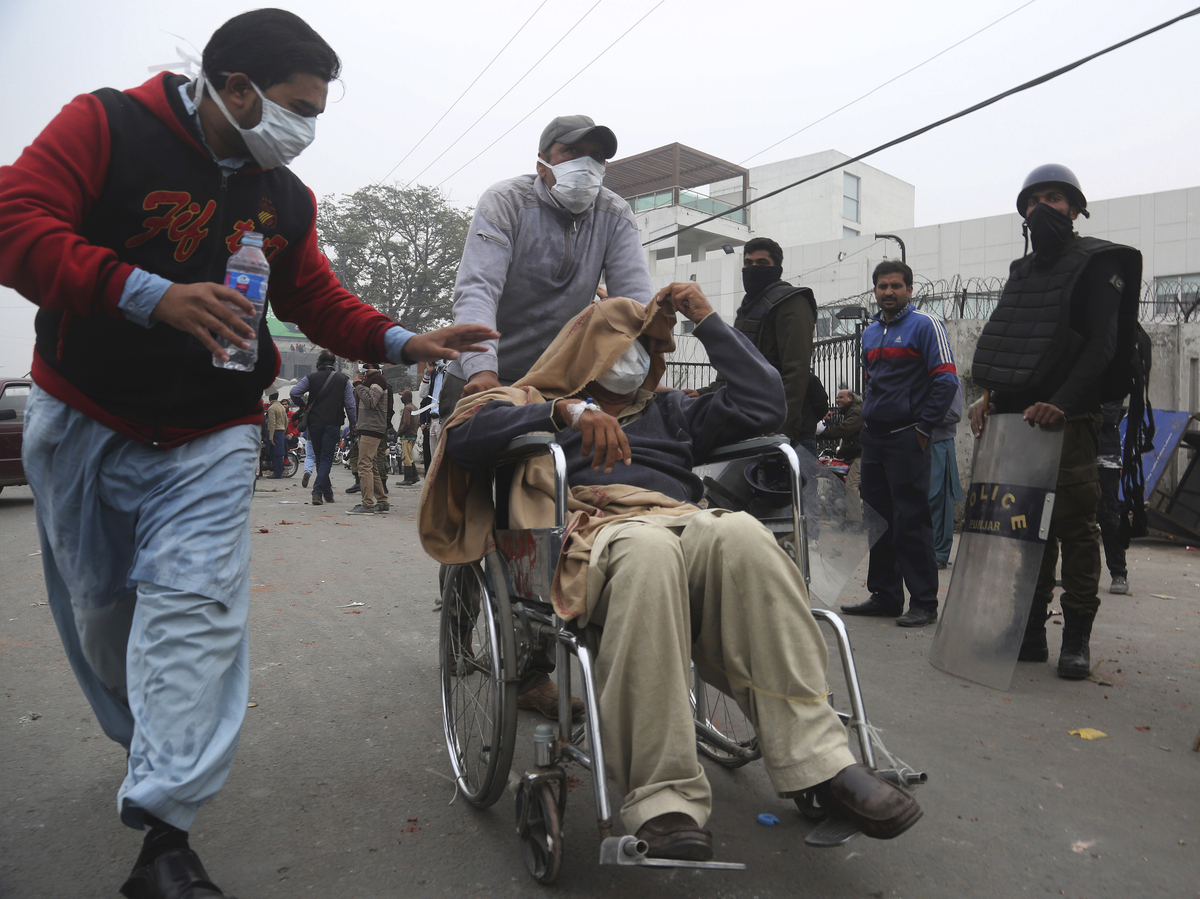 A patient is transferred after angry lawyers staged an attack on the Punjab Institute of Cardiology on Wednesday.

Information Minister Fayaz-ul-Hasan Chauhan arrived at the scene in an attempt to mediate between the two professional groups. But video shows he was also attacked by a mob of lawyers.

"My life was at stake. They tortured me and even fired shots at me and tried to kidnap me," he was quoted as saying by Dawn, an English-language news outlet.

"Hospitals are not attacked even when there is a war, but today lawyers attacked a hospital and caused problems for the patients," Chauhan said, according to the AP.

He credited local reporters with helping him escape the attack.

Punjab Information Minister Fayyazul Hasan Chauhan arrived at the violent protest by lawyers outside Lahore’s Punjab Institute of Cardiology and can be seen being manhandled by a group of protesting lawyers. Chauhan said that "lawyers had tried to kidnap" him. Police are using tear gas and baton charge in an attempt to disperse the lawyers, who are still gathered at the hospital in a large number. #DawnToday

The rioting crowd was eventually dispersed with water cannons, and officials have pledged to compensate the families of the "martyred patients." They have also pledged to pay for the vehicles that were set on fire or damaged.

Prime Minister Imran Khan ordered an investigation into the incident.

Provincial Law Minister Raja Basharat said arrests have been made.

"Several lawyers have been identified from the television footage, and the government will deal with all those involved in the attack with an iron hand," Basharat said.