Accessibility links
Impeachments Reflect The Technology Of Their Times Each of the United States' four presidential impeachment proceedings has highlighted increasingly sophisticated technologies, beginning with telegrams in the case against Andrew Johnson. 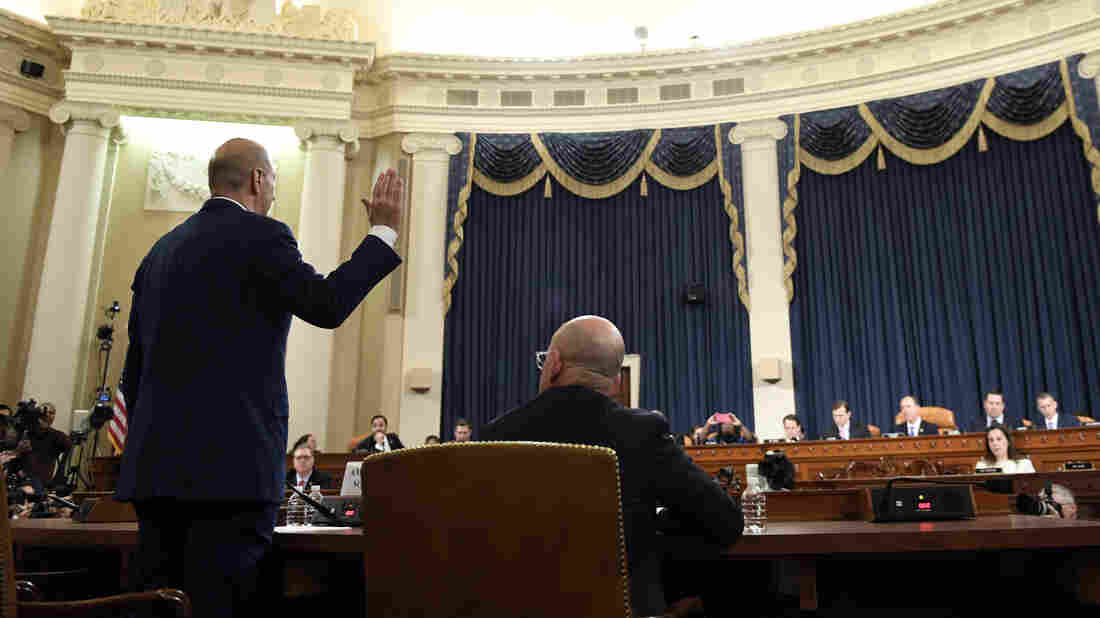 The impeachment proceedings against President Trump have featured testimony by U.S. Ambassador to the European Union Gordon Sondland on a key cellphone conversation with Trump regarding Ukraine. Sondland is seen here being sworn in last month. Susan Walsh/AP hide caption 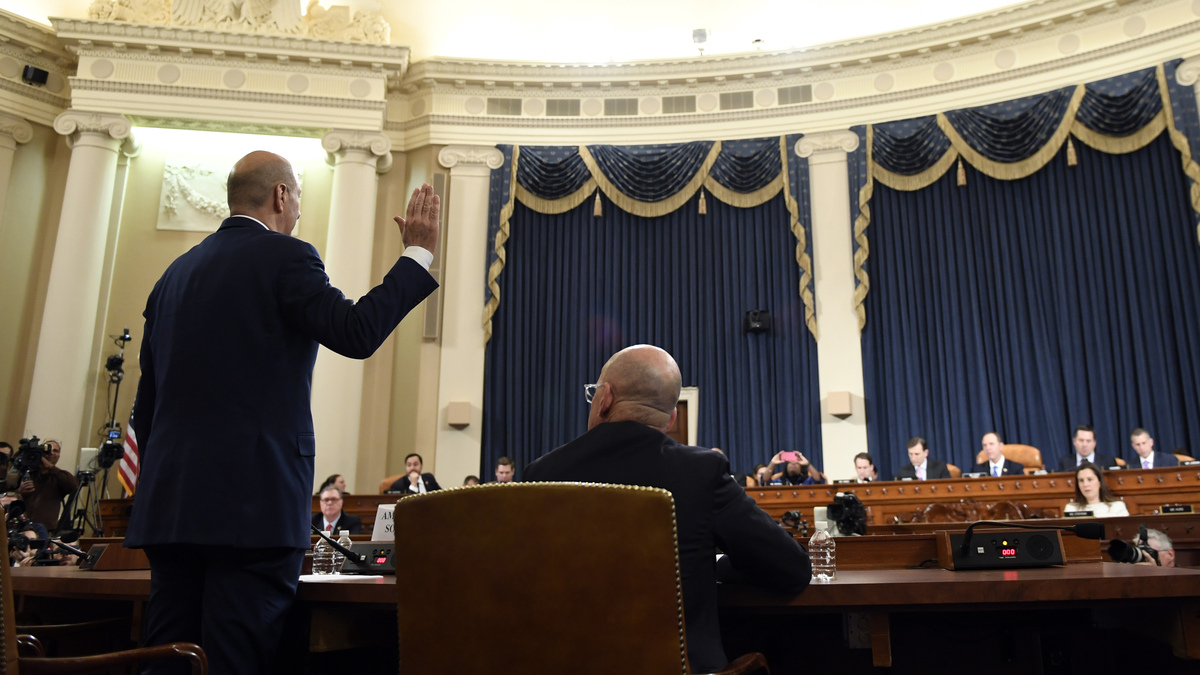 The impeachment proceedings against President Trump have featured testimony by U.S. Ambassador to the European Union Gordon Sondland on a key cellphone conversation with Trump regarding Ukraine. Sondland is seen here being sworn in last month.

Center stage in the Trump impeachment inquiry is a conversation that took place by telephone — a device that was invented 8 years after Andrew Johnson became the first U.S. president impeached by Congress.

Telephones, in fact, have played key parts in all three of the presidential impeachment proceedings that followed Johnson's. But each one of those exercises has also featured technological innovations unheard of in Johnson's time.

To make his case that sacking Secretary of War Edwin Stanton was justified despite a recently passed law requiring prior Senate approval, Johnson writes a lengthy letter to the Senate citing Stanton's mishandling of telegrams as grounds for dismissal.

Johnson points to testimony in the impeachment inquiry from his fired war secretary. In it, Stanton acknowledges having received a telegram from a Maj. Gen. Baird asking what should be done about expected riots in New Orleans. "He took no action upon it, and neither sent instructions to General Baird himself nor presented it to me for such instructions," Johnson writes of Stanton. "On the next day (Monday) the riot occurred. I never saw this dispatch from General Baird until some ten days or two weeks after the riot, when, upon my call for all the dispatches, with a view to their publication, Mr. Stanton sent it to me."

It was the time stamp on Baird's telegram that bolstered Johnson's claim of negligence by Stanton. But the beleaguered president's argument was not highly persuasive. Johnson was impeached by the House and only escaped conviction in the Senate by a single vote.

Telegrams had another, more peripheral role in the first presidential impeachment: they conveyed a show of support for Johnson from the hinterlands. "Remain firm," reads one from Pittsburgh sent to the White House and featured on the front page of the Feb. 25, 1868, edition of The Evening Star of Washington, D.C. "Every decent man in New York City," reads another, "is with you."

A full century would pass before the next attempt to impeach a U.S. president.

What prompted Congress to seek Richard Nixon's impeachment was a bungled break-in at the Democratic National Committee's headquarters at the Watergate complex in 1972 by five operatives working for CREEP, the acronym of the Committee to Re-Elect the President.

The police scanner and walkie-talkies that Washington metropolitan police found in possession of the Watergate burglars were a technological leap forward from the Andrew Johnson-era telegraphs. In the end, though, these gizmos failed to keep Nixon's henchmen from getting busted.

It was another 20th century invention that proved central to Nixon's hasty August 1974 resignation as an impeachment vote against him loomed in the House: the tape recorder.

Like Nixon, all five presidents who preceded him — from Franklin Delano Roosevelt to Lyndon Baines Johnson — had secretly taped their White House telephone and face-to-face conversations. All those recordings remained private, and Nixon clearly expected the 3,400 hours of conversations he'd taped would as well.

In a unanimous decision, the highest court of the land rejected Nixon's claim of executive privilege and ordered the White House to release the audio tapes.

In those recordings, White House counsel John Dean can be heard warning Nixon of the growing danger posed by the president's efforts to cover up the Watergate affair. "We have a cancer within — close to the presidency, that's growing. It's growing daily. It's compounding," Dean tells Nixon, who grunts audibly in acknowledgement. "It grows geometrically now, because it compounds itself."

Twenty-four years later, Bill Clinton becomes the second American president to be impeached by Congress. He's alleged to have committed perjury after denying in a sworn deposition that he'd had "a sexual relationship" with Monica Lewinsky, a 24-year-old White House intern.

It's a stain of semen on a blue dress worn by Lewinsky that seals Clinton's fate in the Republican-led House impeachment inquiry.

DNA identification technology that had not existed in the two previous impeachment episodes implicates Clinton. Based on a sample of his blood drawn in the White House Map Room before an F.B.I. supervisory special agent, the F.B.I. finds "to a reasonable degree of scientific certainty" that Clinton is the source of the DNA detected in the dress' semen stain.

Tapes of phone conversations between Lewinsky and Linda Tripp, a discontented confidant who secretly recorded those calls, lead federal investigators to the blue dress. In one November 1997 exchange, Tripp advises Lewinsky to keep the blue dress. "I would rather you had that in your possession if you need it years from now," Tripp tells her. "It could be your only insurance policy down the road."

Although the DNA test providing incontrovertible evidence that Clinton had lied about his relationship with Lewinsky clinches his impeachment in the House, it is not enough to persuade a required two-thirds majority of the Senate that he should be the first U.S. president removed from office.

Encrypted text messages sent over smartphones are providing some of the most striking documentation of frantic efforts by American diplomats to deal with Trump's freeze on promised military aid to Ukraine. "I think it's crazy to withhold military assistance for help with a political campaign," writes William Taylor, the top American diplomat in Kyiv, in one text exchange with U.S. ambassador to the European Union Gordon Sondland.

Sondland also features in testimony about his impromptu phone consultation with Trump from a Kyiv restaurant that was overheard by others at the table and was later depicted in a rough transcript that was publicly released.

And then there's Twitter. The social media platform launched in 2006 is Trump's preferred bully pulpit and he used it to denigrate the work of career ambassador Marie Yovanovitch while she testified at a House Intelligence Committee impeachment hearing. "Everywhere Marie Yovanovitch went turned bad," Trump wrote in a tweet that Yovanovitch characterized at that same hearing as "very intimidating."

Yet for all the digital age peculiarities of Trump's impeachment saga, his July 25 conversation with Ukrainian president Volodymyr Zelenskiy over a prosaic telephone line remains the main piece of evidence for both Trump's adversaries and his supporters.

No recording of that call is known to exist, other than written notes — a reminder that while advances in technology have mattered in all four presidential impeachment proceedings, it's only to the extent that they're actually put to use.