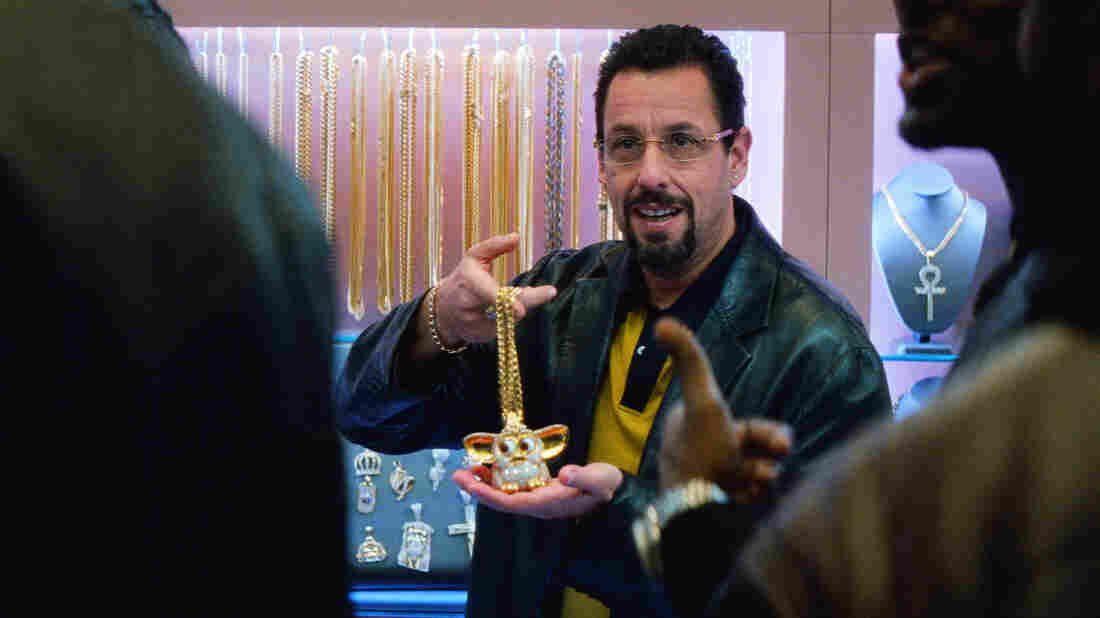 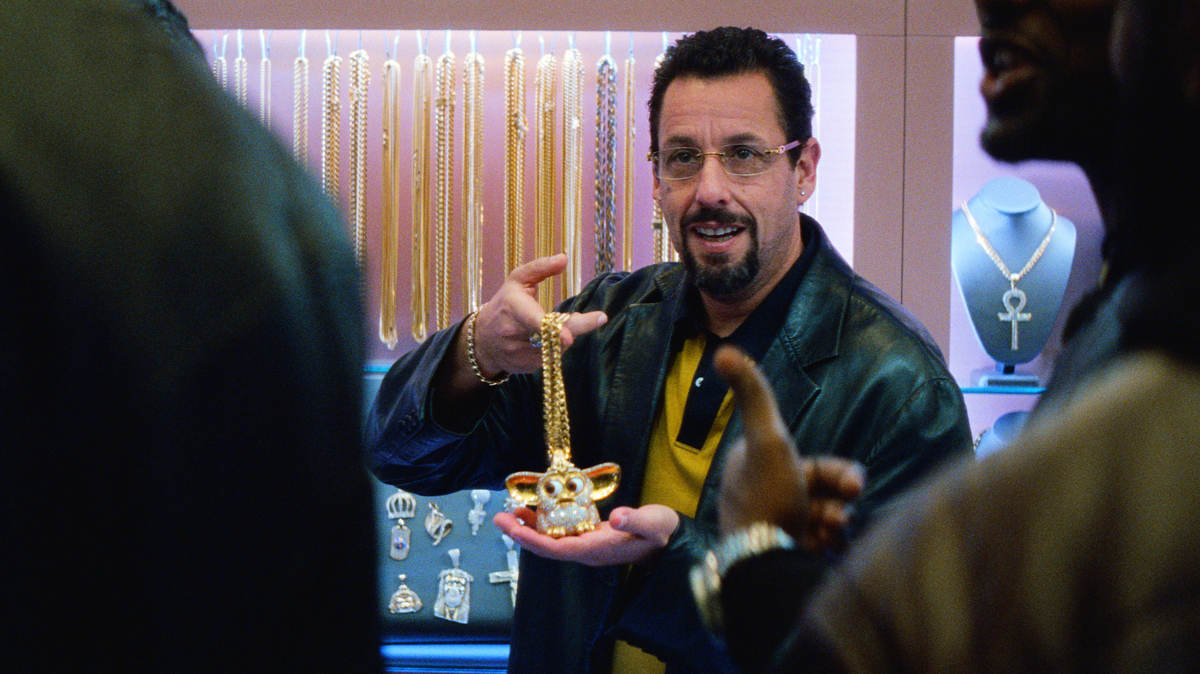 Adam Sandler has been playing jerks and sleazebags for most of his career, but until now his movies didn't make a habit of acknowledging it. So it's exhilarating to watch Uncut Gems, a gritty indie funhouse ride that sets Sandler loose in a world just as manic and angry as his character — a world in which his absurd, impulsive actions have real consequences. Like every straight male under the age of 40, the writer-director brothers Benny and Josh Safdie grew up with the sound of Sandler's screech in their brains. Here they've cracked the code for how to build a riveting story around it, and Sandler himself — in a ratty goatee, designer clothes, and lounge-lizard earrings — has never looked so alive.

We're in the New York Diamond District, the domain of Sandler's Howard Ratner, a scheming jeweler and compulsive gambler whose high-risk life choices create a lot of unnecessary problems. Already deeply in debt, Howie pawns another man's collateral on a priceless item to get enough money to place another sports bet; he neglects his wife (Idina Menzel) and family to have an affair with his much younger employee (Julia Fox); and he screws over friend and foe alike with empty promises and IOUs, even as he hoards what little cash he makes for his own schemes. This is an underworld that runs on crass materialism and smokescreens, where rare minerals share a display case and a bartering currency with fake Rolexes, and every space Howie enters seems to be literally glittering with both promise and instability. But he does have a soul buried under that flashy grin, if he can ever figure out who it's in service of.

As filmmakers, the Safdies are uniquely attuned to street-level dramas on the margins, but they're also savvy students of genre, and so of course their movie about a jeweler pivots around a shiny MacGuffin. Howie has procured an ultra-rare opal from an Ethiopian diamond mine (it's sent to him stuffed inside a frozen fish for safekeeping) and plans to put it up at auction for north of a million dollars. But that's before Kevin Garnett walks into his life. The NBA star (playing himself in his prime, in a Hall of Fame performance for celebrity non-actors) is entranced by the opal, seeing visions of himself in its prism of pure light and color. This is the most elementary appeal of jewelry, after all, and the Safdies literally plunge us inside the radiant visions this stone induces, visualizing the geological perfection that makes so many sane people do crazy things. KG himself knows anything is possible.

Garnett convinces Howie to let him borrow the stone as a good-luck charm while he plays the 2012 NBA semifinals, thus setting off a chain of events that will leave Howie scrambling to stay one step ahead of the debts he owes even as he accumulates more. What's great about Sandler's work here is that, the further he sinks into the muck, the more confident he becomes. He juggles the many, many threats on his life so that he becomes the ringleader of his own circus, gleefully lying through his teeth, spinning verbal patter and slipping into deep, guttural fits of rage when his ducks don't line up precisely. Even the scenes of him watching basketball are riveting.

Uncut Gems follows the mold of the Safdies' previous effort, Good Time, another breakneck New York tale about a guy with a gift for making bad situations worse. These kinds of movies are liable to cause heart palpitations. They shoot their spiralling heroes in tight, claustrophobic close-ups (although cinematographer Darius Khondji is also a fan of security-camera-style overhead zooms) and edit their journeys to induce constant whiplash, with an eye for the tactile qualities of every face, jewel, and carpeted backroom. They also know precisely which buttons to push in their audience: using borrowed time to double down on bad bets is not for those who crave order in their lives.

But Gems also wraps up its most high-wire scenes in some amazing comic setpieces. A malfunction in Howie's security door traps Garnett and his fixer (LaKeith Stanfield) behind bulletproof glass for several minutes. When some collectors pay a visit to Howie during his daughter's school play, they beat him, strip him naked and shove him into the trunk of his car, layering on the humiliations in compounded interest. The movie understands the comic (and cosmic) power of making the world's best bluffer run straight off a cliff.

Of course, thanks to fare like Punch-Drunk Love, we've known Sandler was always capable of a performance like this. But it feels even sweeter plopped into his extended late-career phase of lazy cash-cow comedies. After all, this character's worldview is the product of a bottomless tackiness and naked desire for profit, a middle-aged man who wants the world to know what he thinks he's worth. There's not much daylight between Howie hawking a bedazzled Furby to star athletes and the real Sandler roping Al Pacino into a retina-scarring Dunkin' Donuts commercial. What's different is the self-reflection, the knowledge that bending the world to your will over and over is going to piss off everyone around you. This is what the actor and the film do so well in concert with each other. It's the right movie for the right person at the right time, a thing of strange beauty forged under a mountain of heat, pressure, and irritation.