Accessibility links
Before Sri Lanka's Easter Attacks, Muslims' Warnings About Terrorism Went Unheeded Mohammad Taslim tried to warn authorities about other Muslims who'd been radicalized. He was shot soon after. Two men he flagged are now under arrest for links to Sri Lanka's Easter terrorist attacks. 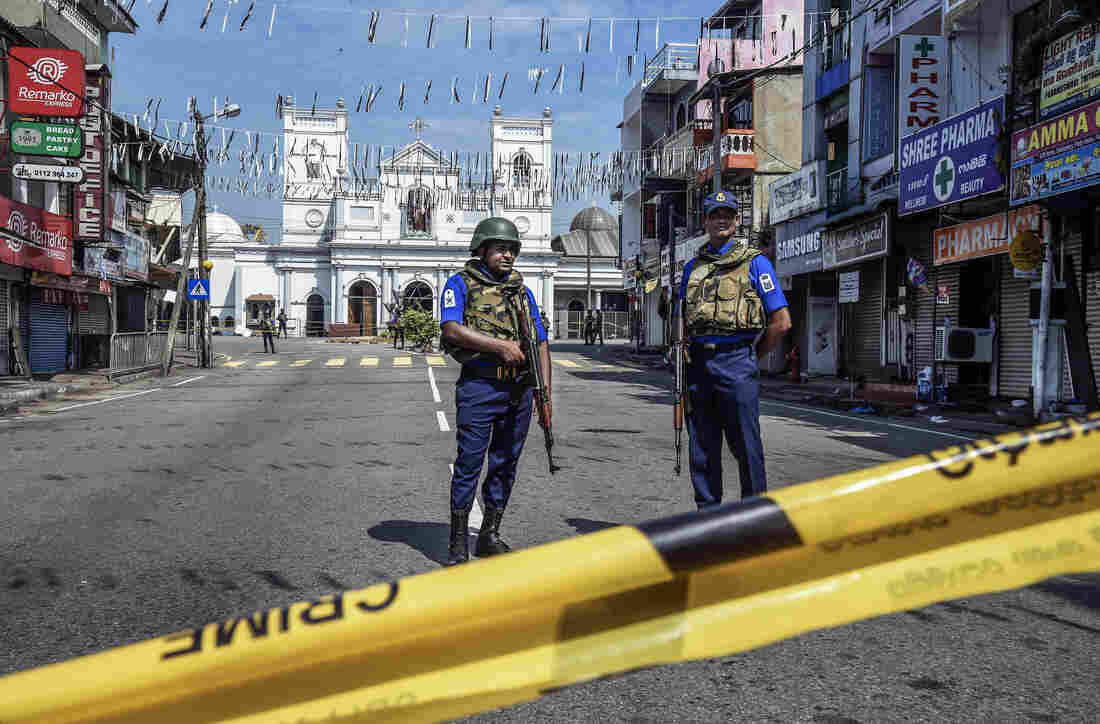 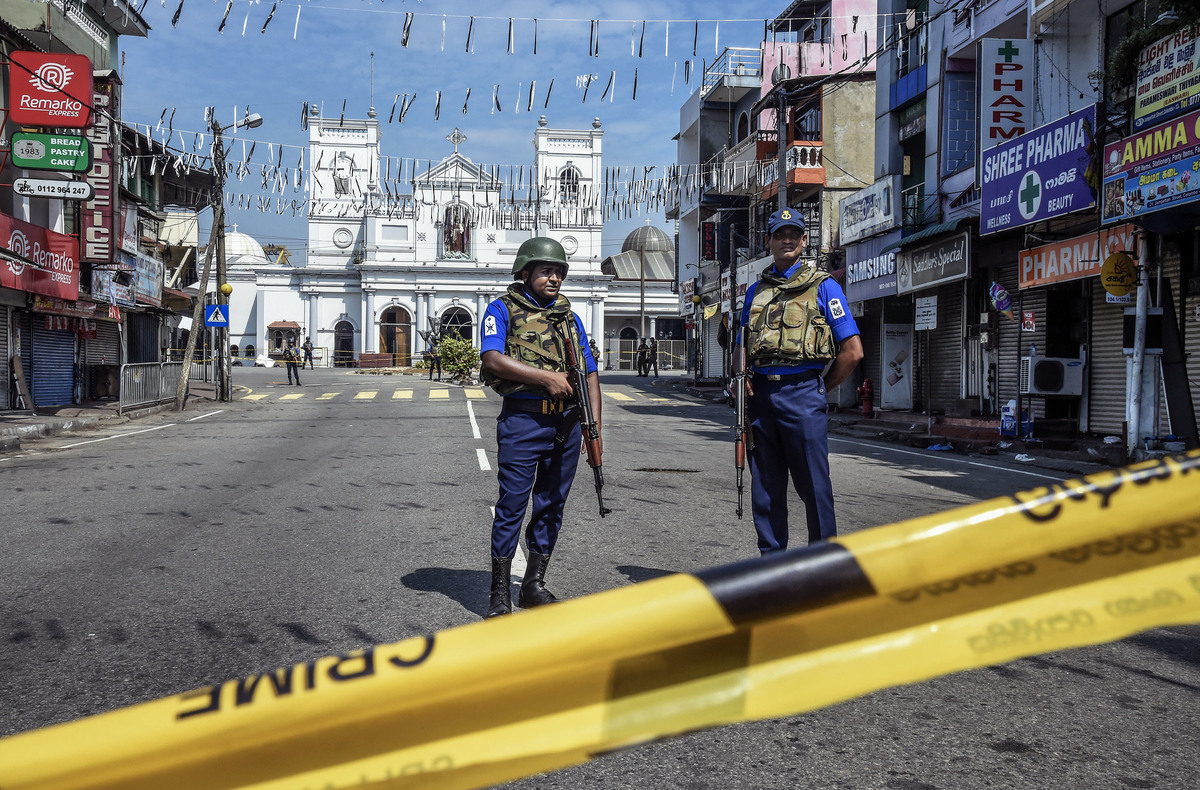 Security personnel stand guard at St. Anthony's Church on April 24 in Colombo, Sri Lanka. The church was among three targeted in this year's Easter Sunday attacks.

On Dec. 26 last year, in a town surrounded by tea and rubber plantations in central Sri Lanka, residents discovered Buddhist statues had been vandalized on the side of the road. In the middle of the night, some saw young men speeding away on motorbikes after they'd shattered glass cases protecting the statues and hacked off the stone and marble Buddhas' noses and hands.

The town, Mawanella, is home to significant numbers of Muslims and Buddhists. Members of the town council worried the vandalism might signify a fraying of relations among the town's religious communities — or perhaps just some mischief by local youths.

Fellow Muslims told him the men bore animosity toward Sri Lanka's Buddhist majority and had become radicalized. Worst of all, they said, the brothers were rumored to be stockpiling weapons. Taslim immediately alerted police. But authorities did not arrest them.

A few weeks later, an ominous message started circulating on Facebook, calling Taslim a "snitch." Then, on March 9 — a day Taslim's wife Fatima Jannath says she'll remember forever — the family awoke with a start at 4:15 a.m.

"I heard a loud pop, and I rolled over in bed, toward my husband. His eyes were open wide, but he couldn't talk. There was blood on the pillow," Jannath, 28, told NPR in an interview at her modest mud-brick home in Mawanella. "Then I saw two men running out of the house, and I started screaming. My worst fears were confirmed."

Taslim had been shot point-blank through his right temple.

Jannath immediately suspected the Abdul-Haq brothers, and told police that very morning. But when authorities went to the brothers' house later the same day, they were gone.

Six weeks later, on Easter Sunday, April 21, suicide bombers killed more than 250 people at Sri Lankan hotels and churches. In the weeks and months before, Sri Lankan Muslims like Taslim did their best to warn authorities about radicalization in their community. They weren't taken seriously. 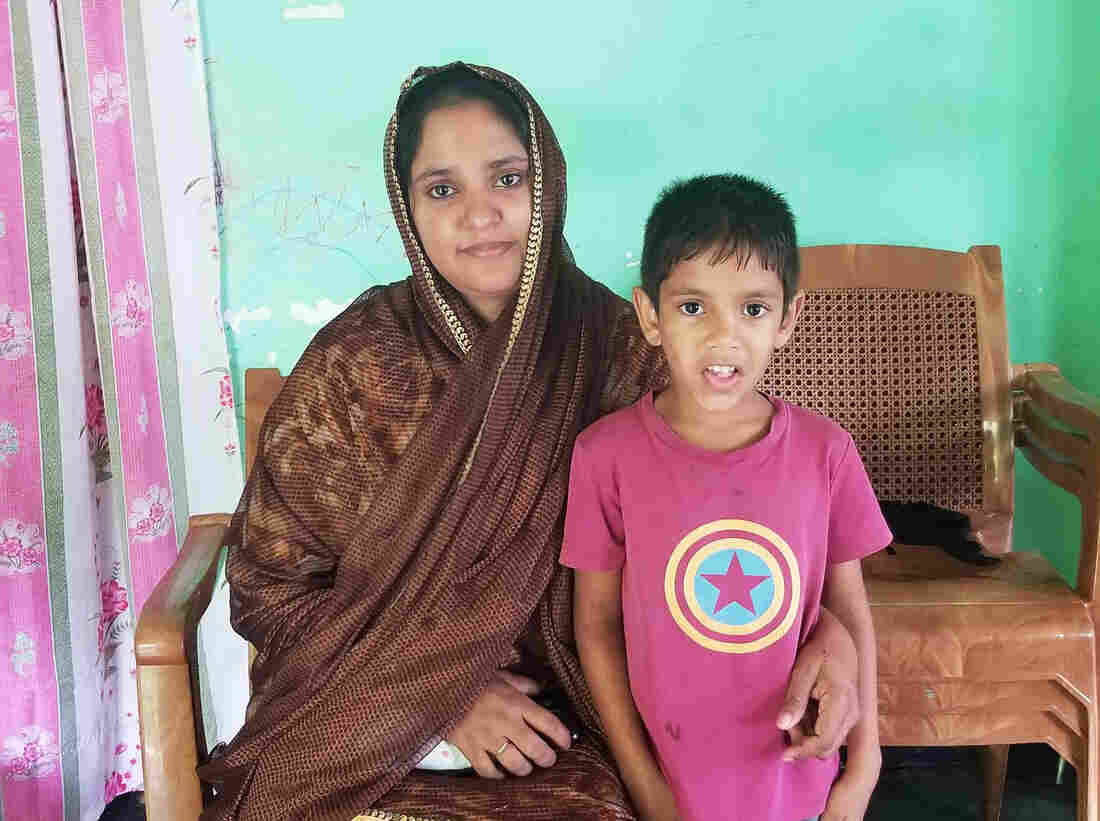 Fatima Jannath and her son Yusef sit in their home in Mawanella, Sri Lanka. Jannath's husband Mohammad Taslim was shot in the head after he tried to warn authorities about radicalization in their Muslim community. Suicide bombers killed more than 250 people on Easter this year. Lauren Frayer/NPR hide caption 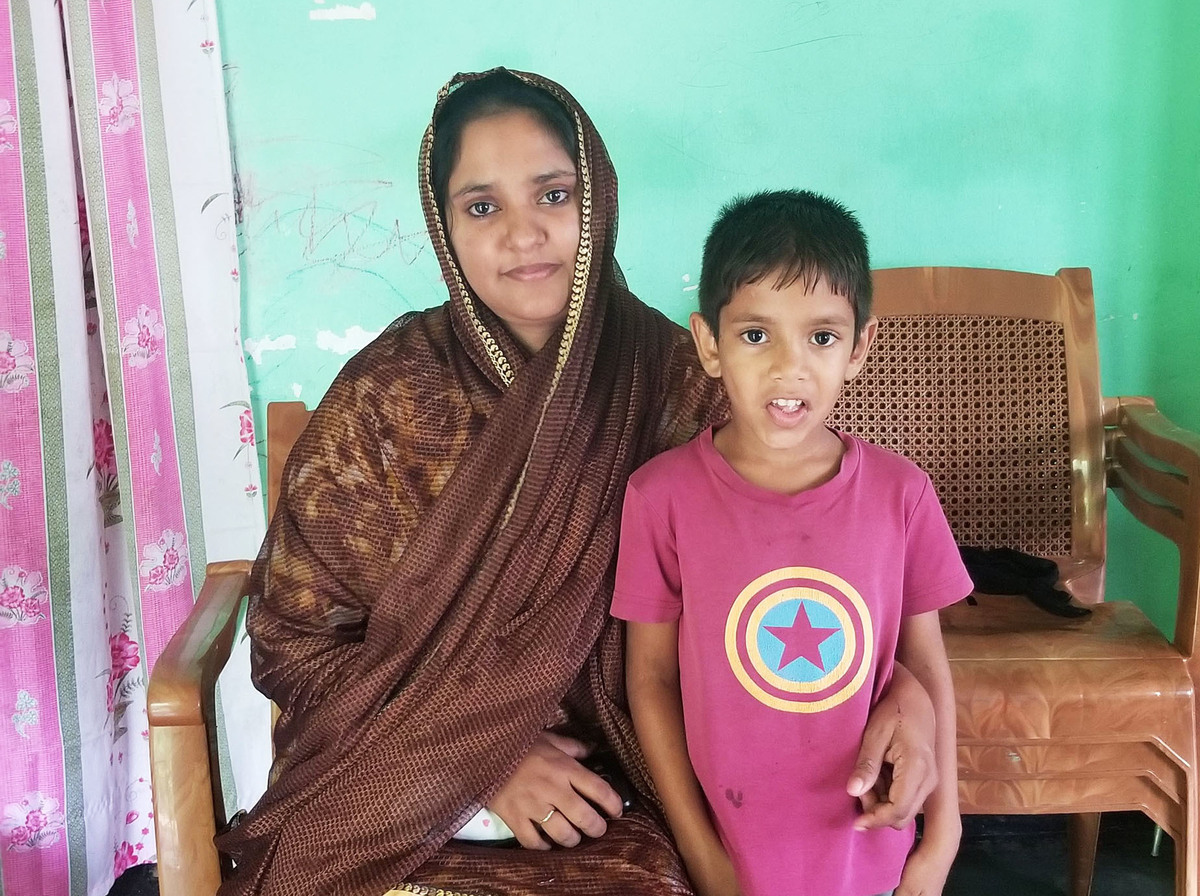 Fatima Jannath and her son Yusef sit in their home in Mawanella, Sri Lanka. Jannath's husband Mohammad Taslim was shot in the head after he tried to warn authorities about radicalization in their Muslim community. Suicide bombers killed more than 250 people on Easter this year.

Two relatively unknown local Islamist groups have been blamed for the Easter attacks, whose repercussions continue to be felt in this predominantly Buddhist island nation of about 22 million, with Muslim, Hindu and Christian minorities.

Six days after the attacks, police finally arrested the Abdul-Haq brothers. Authorities now believe the weapons Taslim had tried to warn them about were part of a stash used in the Easter attacks.

"My heart goes out to the families of the Easter victims. My husband tried to prevent it," says Jannath, weeping. "But now we're all suffering. He's a hero! He paid such a price."

Ten years ago, at the end of a devastating, 26-year civil war, Sri Lanka's military defeated ethnic Tamil separatists notorious for bombings and other acts of terrorism across the country. A new Islamist threat wasn't on officials' radar as much as they now realize it should have been.

"Maybe they themselves didn't know how serious it was. That's the charitable explanation," says Jehan Perera, executive director of the National Peace Council, a think tank in Colombo, the capital. 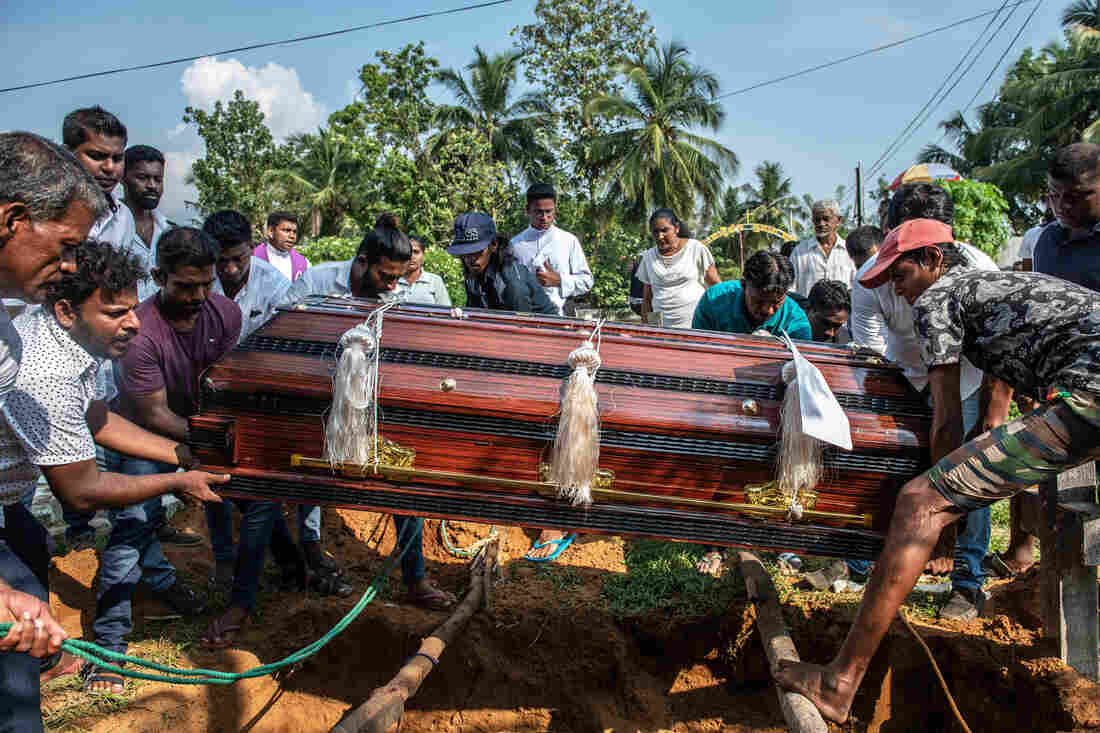 A coffin is lowered into a grave during the funeral of a person killed in the Easter Sunday attack on St. Sebastian's Church in Sri Lanka. Carl Court/Getty Images hide caption 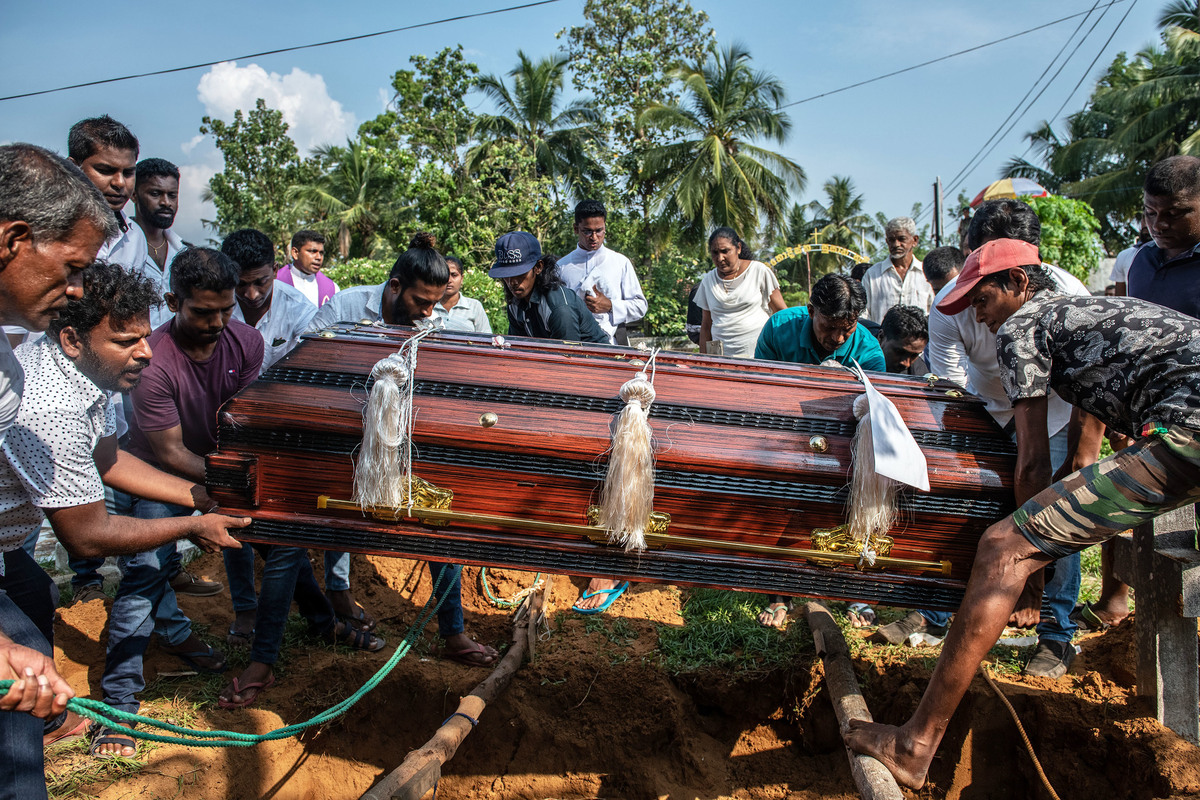 A coffin is lowered into a grave during the funeral of a person killed in the Easter Sunday attack on St. Sebastian's Church in Sri Lanka.

Perera alleges there was negligence and incompetence on the part of Sri Lankan officials at the highest levels of government. The country's intelligence chief resigned in June over the Easter attacks.

Taslim's case shows that the failures extended to the municipal level and to local policing. To find out why, Perera says, look at the country's recent history.

Most of Sri Lanka's roughly 2 million Muslims are ethnic Tamils, who were on the losing side of the civil war. (Muslims are a minority within that predominantly Hindu group). Since the war's end in 2009, many ethnic Sinhala Buddhist politicians have sought to win over Muslims by respectfully trying to stay out of their affairs, Perera notes. That has too often — as in Taslim's case — meant turning a blind eye to potential problems.

"Muslim radicalization was [treated as] an intra-Muslim phenomenon — one set of Muslims fighting another set of Muslims — and therefore there was no need for the state to get involved," he says. Also, he says, national-level Sinhala Buddhist politicians wanted Muslim votes, and tried to avoid offending powerful local Muslim politicians who could deliver those votes. "So the government didn't want to antagonize them by going and investigating these things too much," Perera says.

Rather than interfering directly, officials would instead ask prominent Muslims like Taslim to investigate their own community. And when civilians — like Taslim, untrained as official investigators — reported back on rumors in the community, authorities were often reluctant to act. 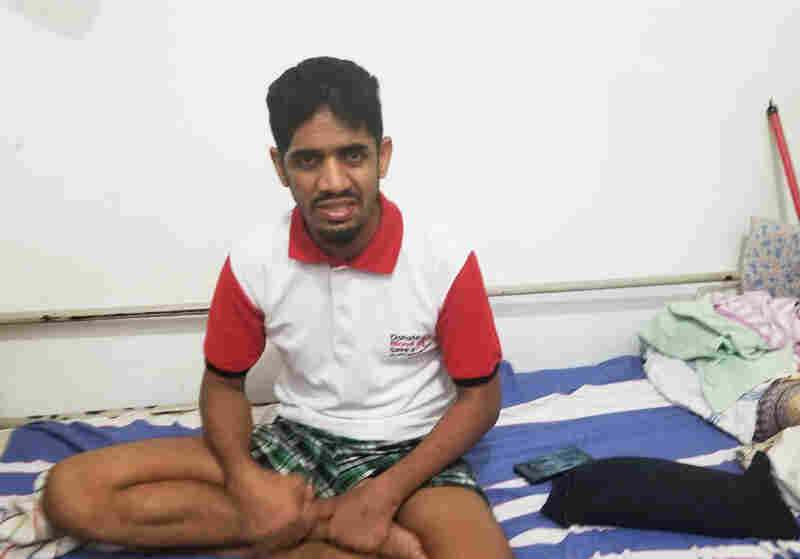 Mohammed Taslim, 38, sits on his hospital bed in Sri Lanka. After being shot in the head in March, Taslim is partially paralyzed on his left side and is unable to walk. Lauren Frayer/NPR hide caption 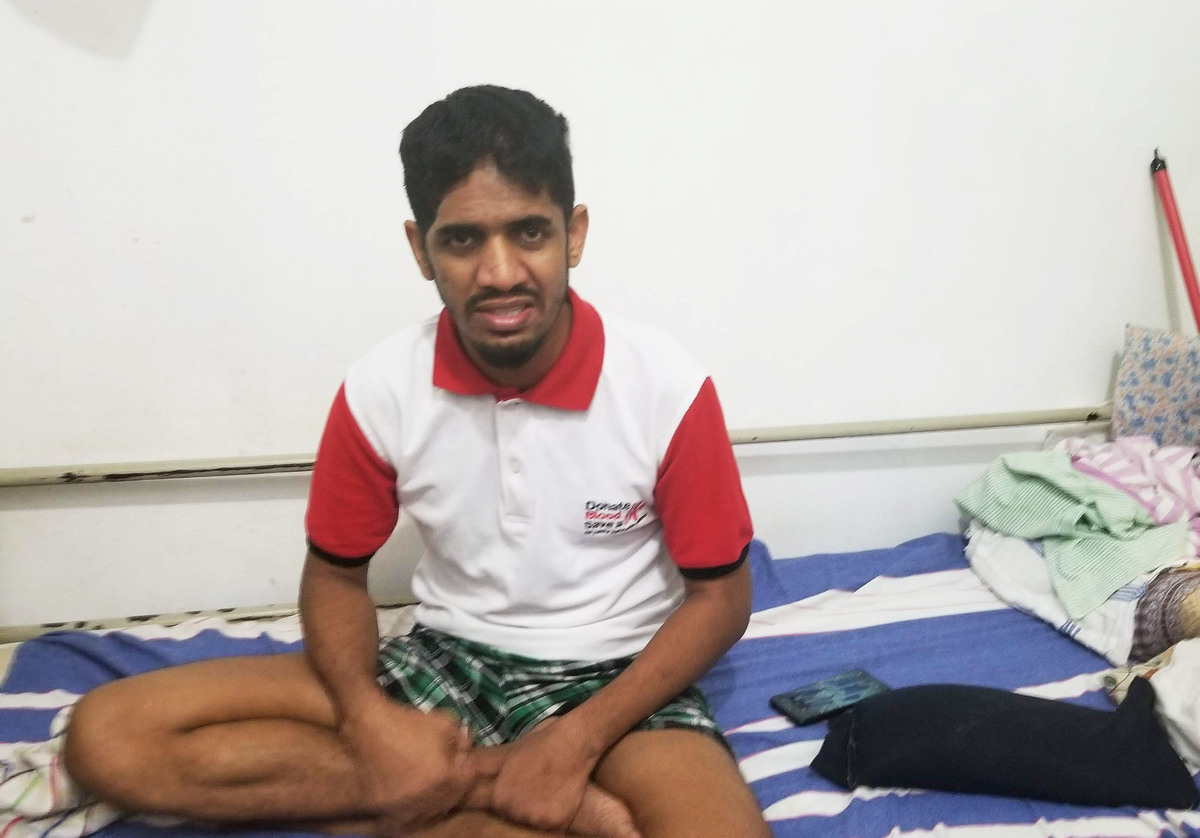 Mohammed Taslim, 38, sits on his hospital bed in Sri Lanka. After being shot in the head in March, Taslim is partially paralyzed on his left side and is unable to walk.

Mawanella's town council and police department did not respond to NPR's requests for comment, and a government minister refused to speak on the record.

"They could have saved the lives"

The Abdul-Haq brothers are now awaiting trial for allegedly helping the Easter bombers plot their attacks. They also face additional charges — for the attempted murder of Mohammad Taslim.

Nine months after he was shot, Taslim is alive.

The shooting left him paralyzed on his left side. Surgeons had to remove part of his skull. He was in and out of a coma for months. But he is recuperating in a hospital about two hours' drive from Mawanella.

Taslim agreed to a rare interview in mid-November. NPR had to obtain permission from local politicians to cross a police cordon guarding his room in the hospital. 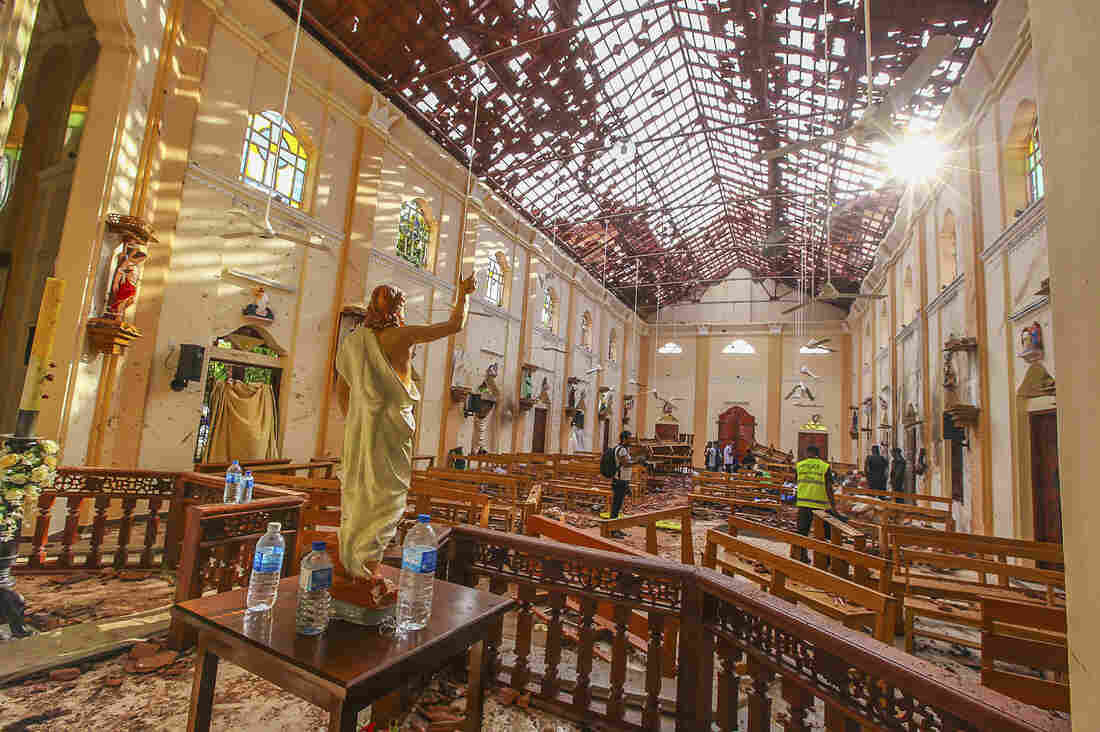 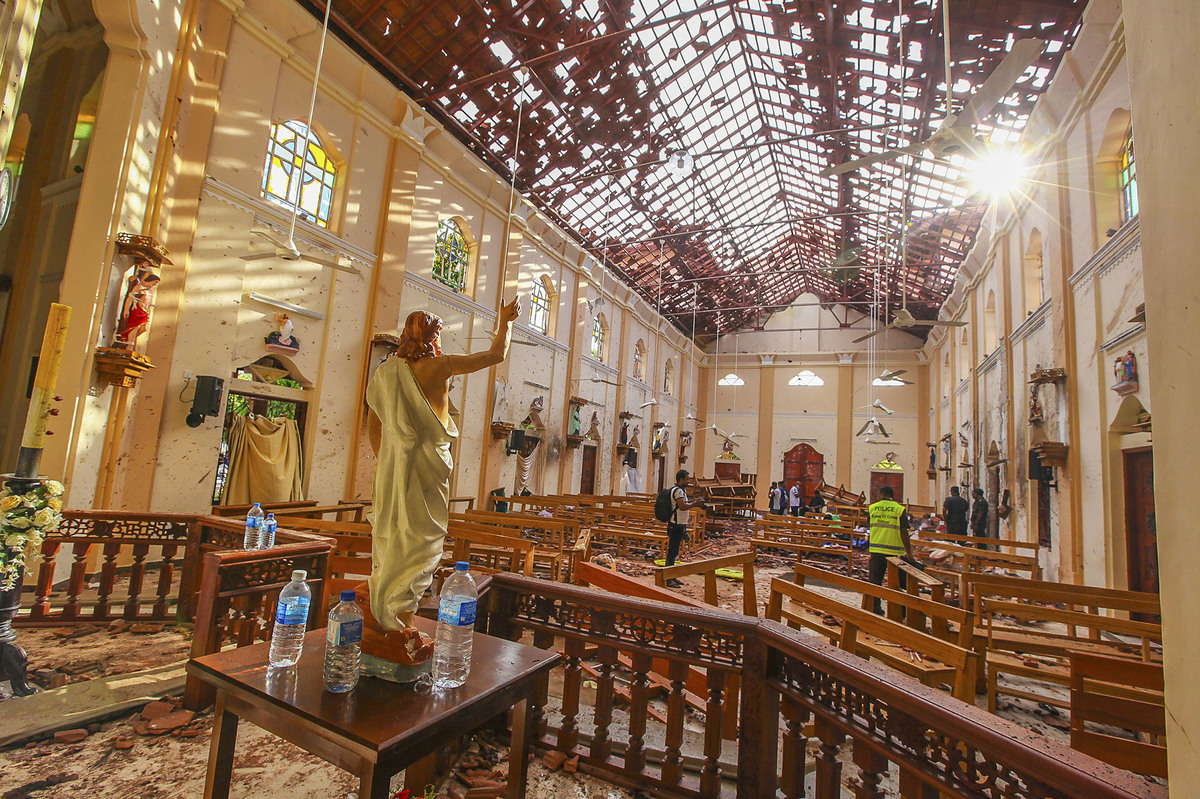 St. Sebastian's Church was targeted in a blast on Easter Sunday in Negombo, north of Colombo, Sri Lanka.

It was in his hospital bed that Taslim, 38, heard of the Easter attacks and the Abdul-Haq brothers' subsequent arrest.

"I was devastated, because if police had arrested the brothers when I first alerted them, none of this would have happened. I wouldn't be in this hospital bed," Taslim told NPR. "Even if they had arrested them after I was shot, they could have saved the lives of more than 250 people."

Nowadays, Taslim's brother-in-law babysits the couple's three young sons every day so that Jannath can visit Taslim in the hospital.

"My brother-in-law was ready to fight these people. He was ready to raid militants' houses himself," says Mohammed Shiraz, 38. "But police advised him against it. They told him to be careful. He listened to them. But then the government didn't do its part."

There were many other missed warnings, experts say. The U.S. and India both had sent specific intelligence they picked up that attacks were being planned in Sri Lanka. But the president and prime minister at the time had been bickering and refused to share information with one another. The government also failed to keep the military informed.

Since the Easter attacks, Sri Lanka has seen anti-Muslim riots. Mosques have been attacked. Many Muslims fear a continued backlash.

Last month, voters elected a new president, Gotabaya Rajapaksa, a former military man who campaigned as being tough on national security. He was also accused of human rights abuses against minority Tamils at the end of the civil war.

Shiraz says Taslim's family now wants to leave Sri Lanka — out of continued fear for Taslim's safety, and for better medical treatment, which Taslim will likely need for the rest of his life.

The family is ailing financially. Taslim's medical treatment is expensive. Jannath has to bring food to the hospital daily. She's unable to work on top of managing his care. One Muslim lawmaker has been sending them about $330 a month, Shiraz says. But it's not enough.

No other government officials have phoned or visited, Shiraz says.

Taslim, he says, "is just an embarrassing reminder for them of their own failures to protect people."