Accessibility links
Attorneys For Boston Marathon Bomber To Appeals Judges: Trial Was Not Fair Dzhokhar Tsarnaev was convicted and sentenced to death in 2015. On Thursday, his attorneys will argue that the jury was biased and Tsarnaev couldn't get a fair trial in Boston.

Attorneys For Boston Marathon Bomber To Appeals Judges: Trial Was Not Fair

Attorneys For Boston Marathon Bomber To Appeals Judges: Trial Was Not Fair 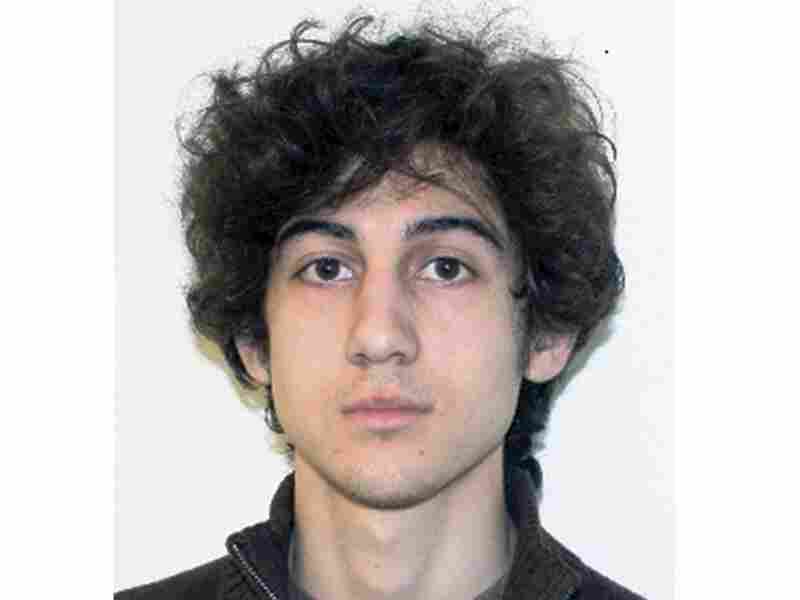 Dzhokhar Tsarnaev was convicted and sentenced to death for carrying out the April 15, 2013, Boston Marathon bombing attack. FBI via AP hide caption 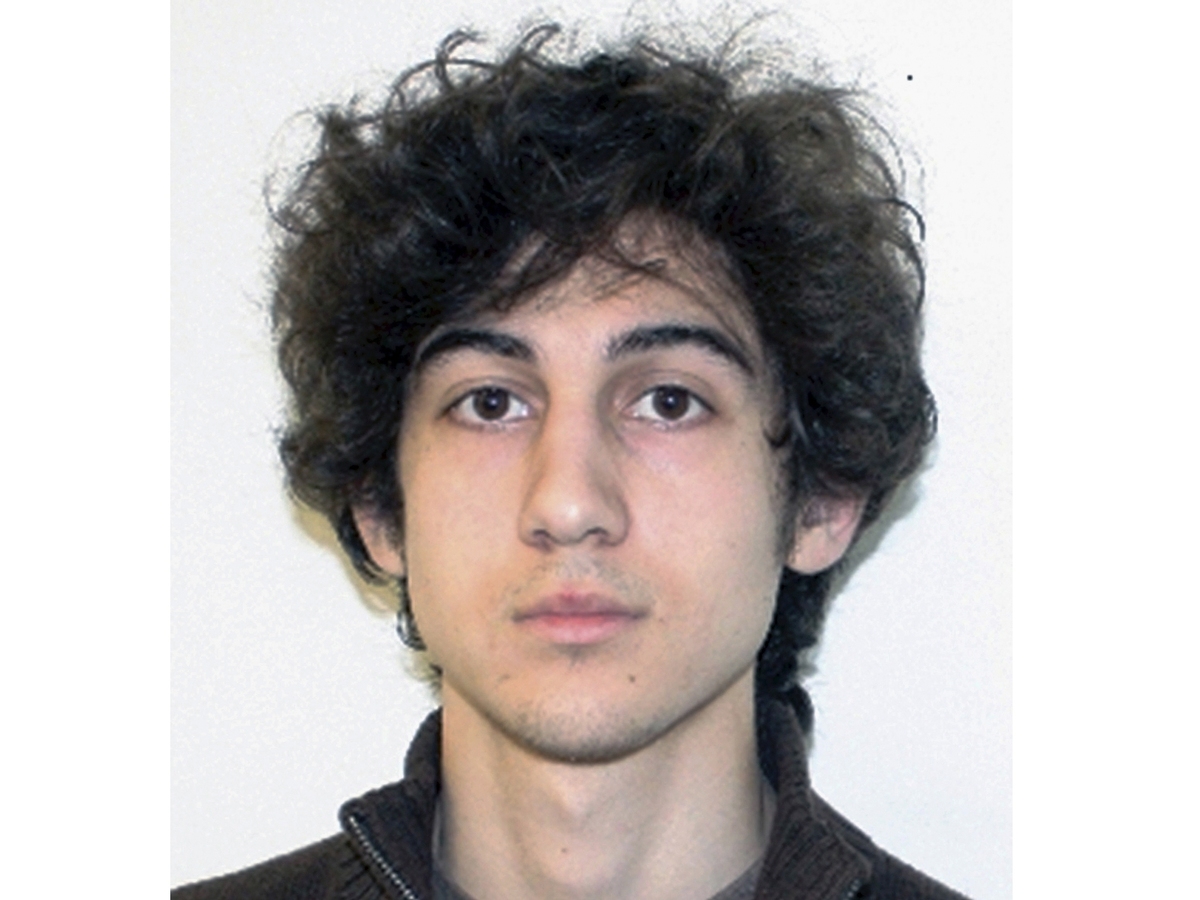 Dzhokhar Tsarnaev was convicted and sentenced to death for carrying out the April 15, 2013, Boston Marathon bombing attack.

On Thursday, lawyers representing convicted 26-year-old Boston Marathon bomber, Dzhokhar Tsarnaev, will go before a three-judge federal appellate panel to argue that their client did not receive a fair trial in 2015. They will also ask that the death penalty in this case be rescinded.

Tsarnaev's new legal team contends that jury selection was tainted by anti-Tsarnaev bias that was hidden from the U.S. District judge. They will further argue to the U.S. Court of Appeals for the 1st Circuit that Judge George O'Toole should not have allowed the trial to be held in Boston, since the city was widely viewed as a "victim" in the attack.

Robert Bloom, a professor at Boston College School of Law specializing in criminal procedures, says high-profile trials are often moved to other venues for good reasons. He said finding an impartial jury in prominent cases where the crime occurred is difficult. The Tsarnaev case, which he compared to the Oklahoma City bombing in terms of its widespread impact on the local community, should not have been an exception.

"In Oklahoma, there were many more people killed, but there are similarities," Bloom said. "In Oklahoma, the Timothy McVeigh trial was moved to Colorado. It was a U.S. district court judge who decided on venue, and venue is a kind of discretionary thing. On the other hand, O'Toole tried very hard to keep it in Boston and succeeded."

Prior to the start of the 2015 trial, Tsarnaev's attorneys requested a change of venue. O'Toole's former colleague on the federal bench, Nancy Gertner, now a professor at Harvard Law School, said that keeping the case in Boston complicated the task of impaneling an impartial jury.

"Boston was the victim and not just conceptually, but also everyone was victimized by the lockdown" that was ordered as police searched for the bombing suspects, Gertner said. "So there was a substantial question about whether the case should have been brought in Boston and a substantial question about timing, because the trial was actually taking place during the end of the second anniversary of the bombing when you couldn't go around the city without seeing 'Boston Strong.' " 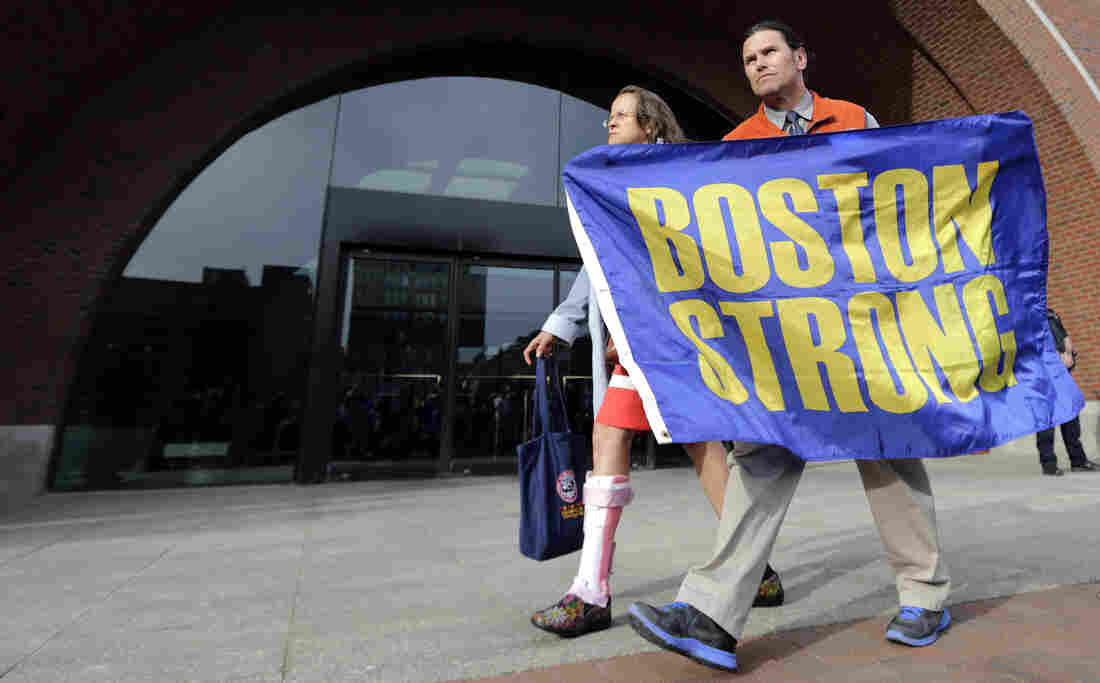 Carlos Arredondo — who is credited with saving the life of Boston Marathon bombing survivor Jeff Bauman, who lost both of his legs in the blast —leaves the Moakley Federal Courthouse with his wife, Melida, after the verdict in the penalty phase of the trial of Dzhokhar Tsarnaev on May 15, 2015. Charles Krupa/AP hide caption 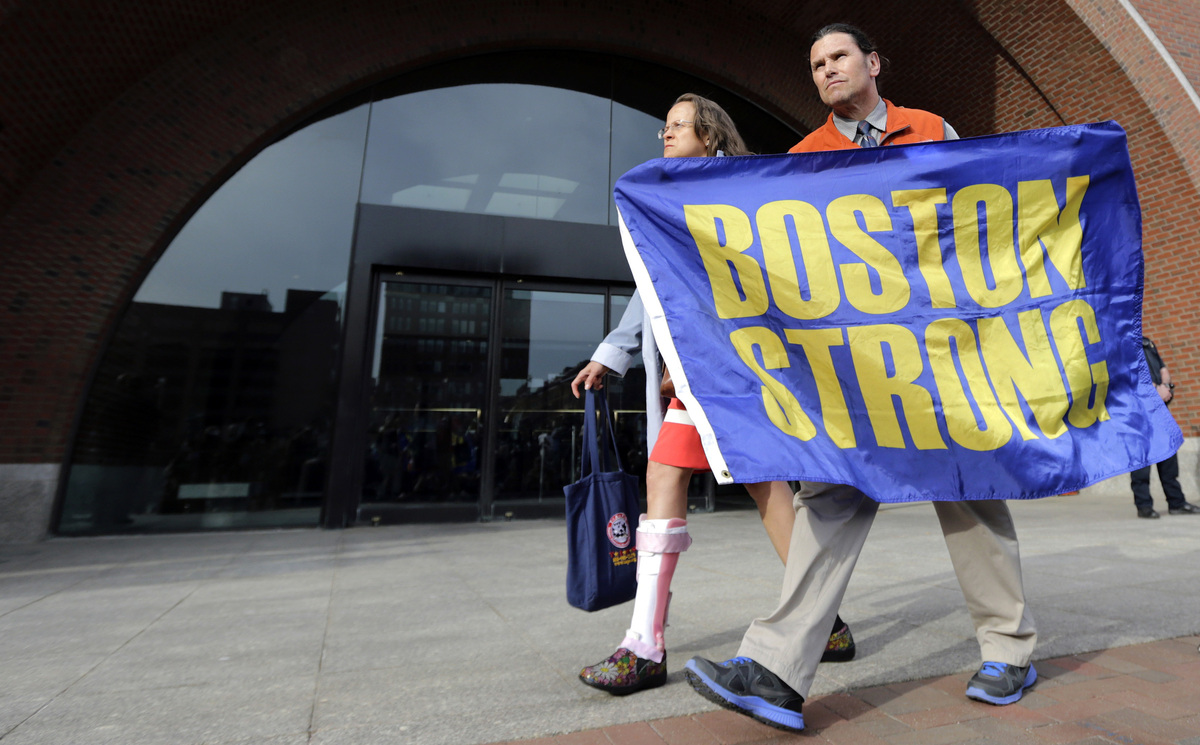 Carlos Arredondo — who is credited with saving the life of Boston Marathon bombing survivor Jeff Bauman, who lost both of his legs in the blast —leaves the Moakley Federal Courthouse with his wife, Melida, after the verdict in the penalty phase of the trial of Dzhokhar Tsarnaev on May 15, 2015.

Gertner said that when a court rejects a change of venue, "one premise of that is that you will make sure that this is an extraordinarily careful voir dire."

But in this case, voir dire — the preliminary questioning of prospective jurors — was anything but careful, said Gertner.

"Instead of asking the specific question about what people knew about the case," Gertner said, "[O'Toole] asked the most general: 'Have you heard about this case?' kind of question."

Prior to the trial, O'Toole promised that he had put together a screening process that would filter out any juror bias.

But during the trial, two jurors, including the foreperson, had failed to disclose a flurry of social media postings they had exchanged with friends about the case. The foreperson, according to the defense, described Tsarnaev on Twitter as "a piece of garbage" and also failed to mention that she had sheltered in place during the 18-hour search for the suspects on April 18, 2013. Court documents show that she was silent during voir dire about "22 Twitter posts in which she had mourned the victims" and praised police officers.

The court documents also revealed a second juror exchanged messages on Facebook about the jury selection process. In one exchange, a friend encouraged him to " 'get on the jury,' and 'send' Tsarnaev 'to jail where he will be taken care of.' "

Gertner is incredulous that O'Toole did not replace the jurors – especially in a case involving the death penalty — when their social media postings were discovered.

"This was a singularly extraordinary thing to have happened in any case, but especially a death penalty case. When you have a juror who lied in answer to a question, in my view, that would have been enough to tip any verdict, at any time," the professor said.

But federal prosecutors rejected the argument that the postings rendered the jurors incapable of making unbiased decisions. O'Toole declined to disqualify them before the jury was impaneled and described the defense allegations that the jurors were biased as "speculative."

Daniel Medwed, WGBH legal expert and Northeastern University law professor, said the appeals court may be open to O'Toole's argument: "The question here is whether or not one juror's posting of information about the bombing on social media somehow infected the trial and potentially deprived Tsarnaev of his right to a fair trial. Unless we have stronger evidence than just the mere fact that he posted on social media, I'm not sure this claim rises to the level of reversible error."

Dzhokhar Tsarnaev's trial began on March 4, 2015, with Judith Clarke, the chief defense counsel, admitting that in a scheme with his older brother Tamerlan, her client set off one of the bombs near the Boston Marathon finish line two years earlier. For the defense, what was mainly at stake was the penalty. The defendant was charged with 30 counts, of which 17 were punishable by death.

The bombings took the lives of 8-year-old Martin Richard from the Dorchester neighborhood of Boston, 23-year-old Lingzi Lu, a Boston University graduate student from China, and 29-year-old Krystle Campbell from Arlington, Mass. A few days later, Massachusetts Institute of Technology Police Officer Sean Collier was fatally shot by the Tsarnaevs as he sat in his cruiser on the university campus.

The defense at the time of the trial tried to introduce what they called mitigating evidence to show that Tsarnaev was under the control of his older brother, Tamerlan, who was killed in a shootout in Watertown with police four days after the marathon. Recently unsealed documents seem to confirm that Tamerlan took part in a grisly triple homicide in Waltham approximately 18 months before the bombing. Tsarnaev's legal team will tell the three-judge appellate panel that if O'Toole had allowed these documents into the court record, it would have shown that the defendant was under the influence of his murderous brother.

But Medwed doubts that this argument will persuade the judges to order a new trial.

"The fact that Tamerlan may have been particularly violent doesn't necessarily point to the dynamics of his relationship with his younger brother, Dzhokhar," the legal expert said.

On a windy day in May 2015, then-U.S. Attorney Carmen Ortiz, addressed reporters outside of the Boston federal courthouse shortly after the jury recommended Tsarnaev be put to death.

"The trial of this case has shown the world what a fair and impartial jury trial is like," Ortiz said.

But Tsarnaev's legal team this week will argue before the U.S. Court of Appeals that their client received neither a fair nor impartial trial and sentencing. On Thursday the appellate court will consider their argument and three principal questions:

The court is not expected to rule right away.