Accessibility links
Votes On Articles Of Impeachment Delayed Until Friday By House Judiciary Chairman Jerry Nadler unexpectedly called a halt for the night without consulting minority Republicans after hours of procedural combat toward the expected votes. GOP members were outraged. 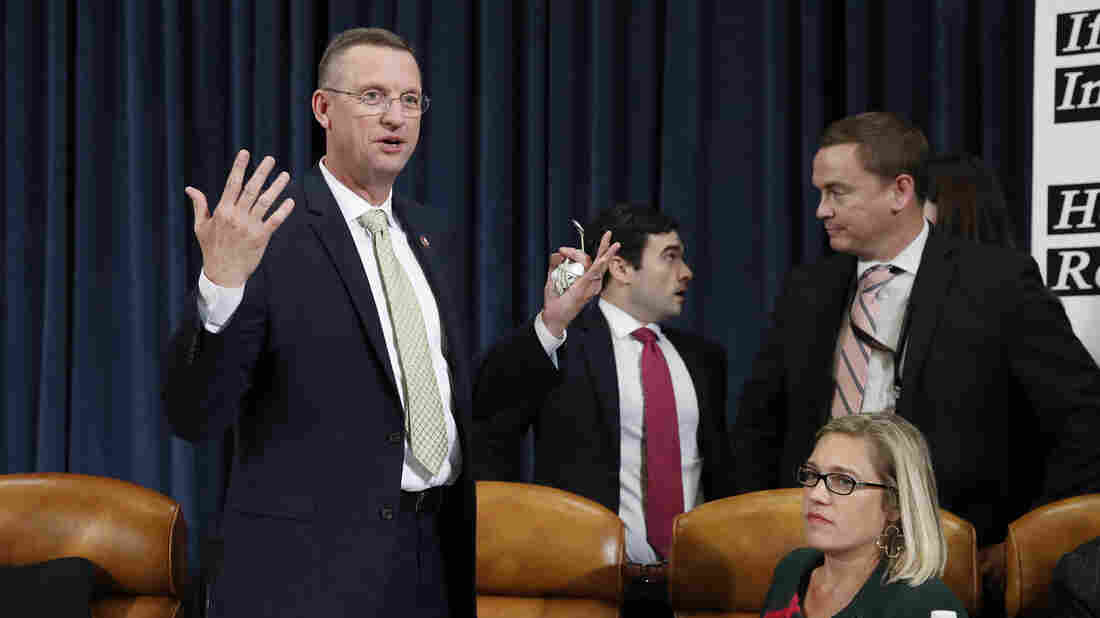 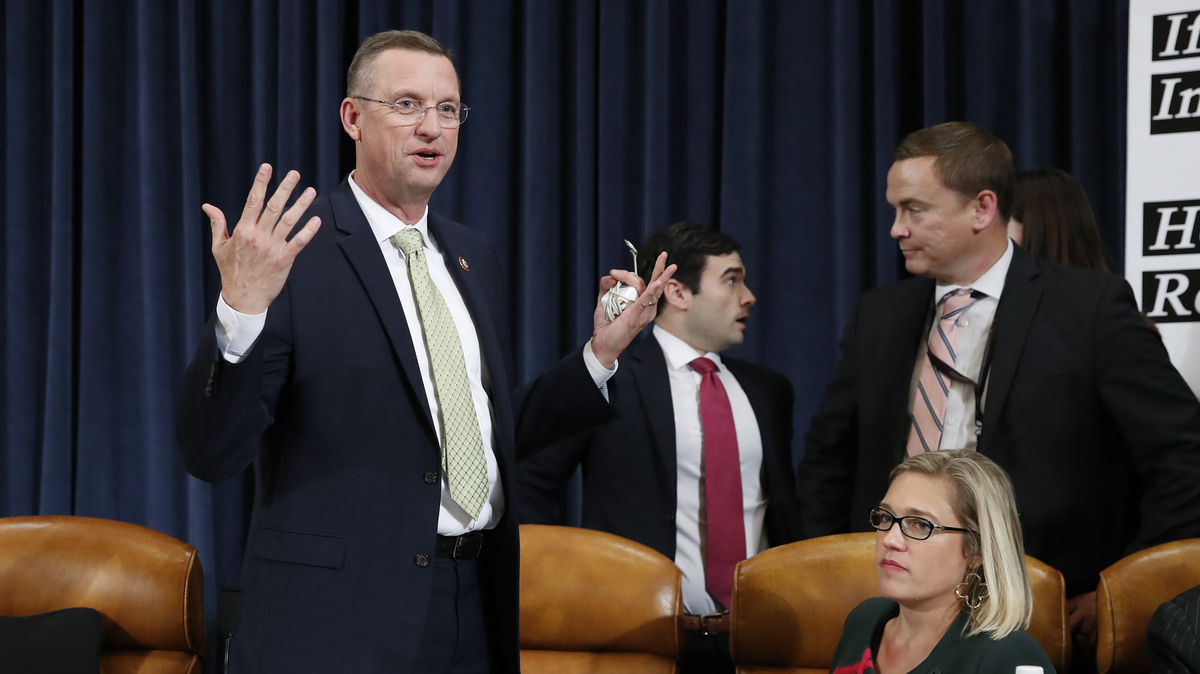 House Judiciary Committee ranking member Rep. Doug Collins, R-Ga., stands up as the committee abruptly adjourns without votes on the articles of impeachment against President Trump.

Planned votes on two articles of impeachment against President Trump were delayed late Thursday night by Rep. Jerry Nadler, the chairman of the House Judiciary Committee. He asked members to consider how they want to vote and to reconvene at 10 a.m. Friday.

Ranking minority member Rep. Doug Collins and others protested that Nadler had upset the committee's plans without consulting them.

The Judiciary Committee had sparred for more than 12 hours Thursday ahead of expected votes.

If approved, the articles will head to a vote of the full House, likely by the end of next week. A vote to impeach would trigger a Senate trial, expected in January, over whether Trump keeps his office.

This month's spectacle is rare — it is only the fourth time articles of impeachment have been introduced. If the House votes to impeach Trump, that would represent only the third such instance in United States history.

The House Judiciary Committee's Republicans did not go along quietly Thursday and sought to delay the panel's actions with procedural motions and appeals to the chairman, Jerry Nadler, D-N.Y., including for a hearing of their own they believe they're owed under the rules. 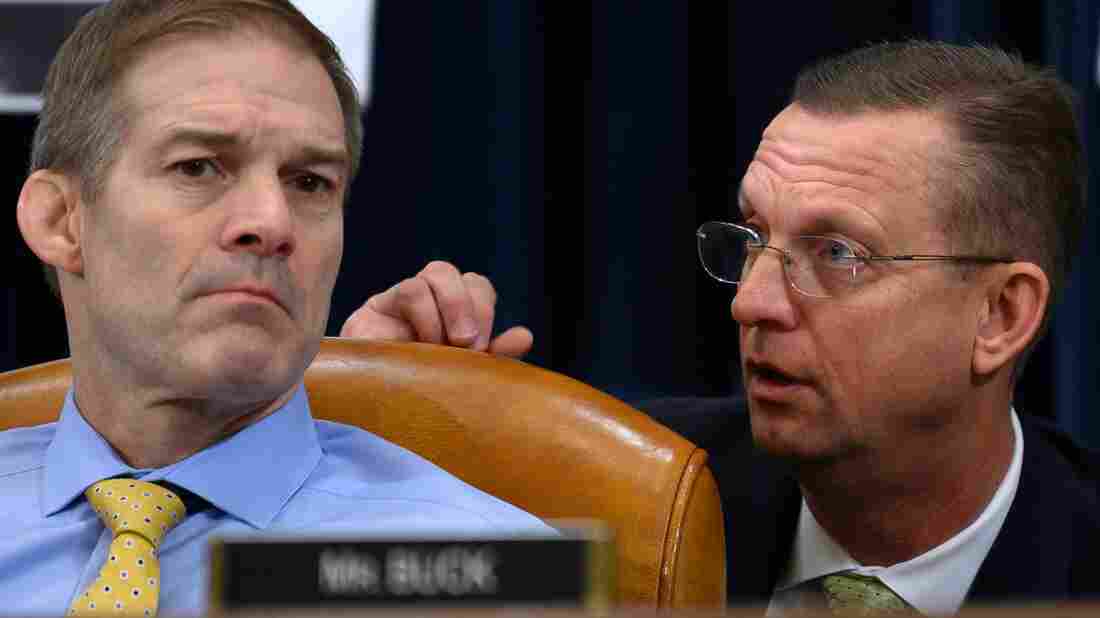 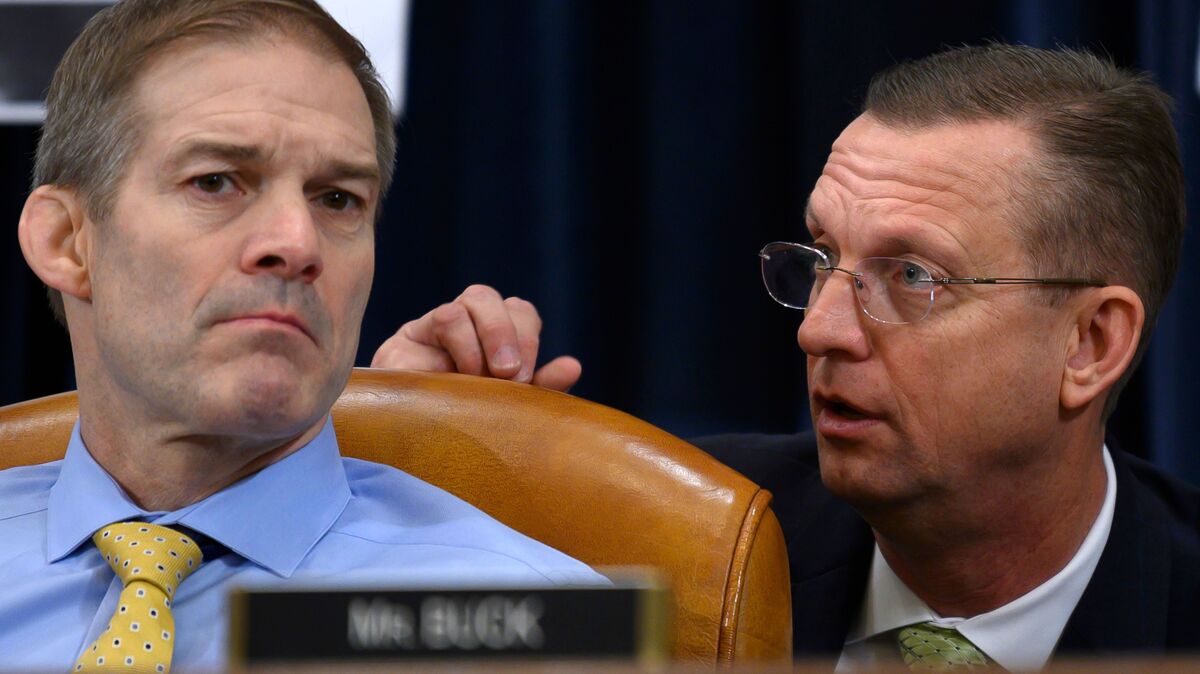 Rep. Jim Jordan, R-Ohio, moved to strike the language of the first article of impeachment and to substitute words that emphasized what he called an account of the Ukraine affair that underscored how Trump had done nothing wrong.

Rep. David Cicilline, D-R.I., opposed that amendment to preserve the articles of impeachment based on what he called Trump's improper conduct.

Rep. Steve Chabot, R-Ohio, said, "There simply wasn't a crime committed here and there shouldn't be an impeachment here, either."

Rep. Eric Swalwell, D-Calif., had his own take: "There are no crimes here? That is the defense? ... How about the highest crime that one who holds public office can commit — a crime against our Constitution?" 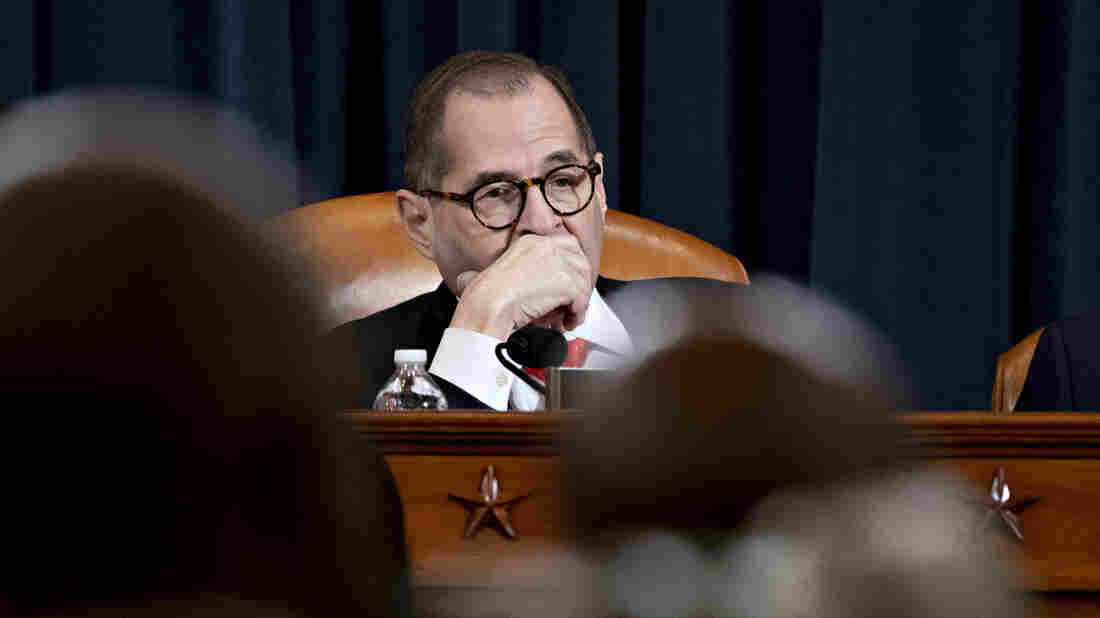 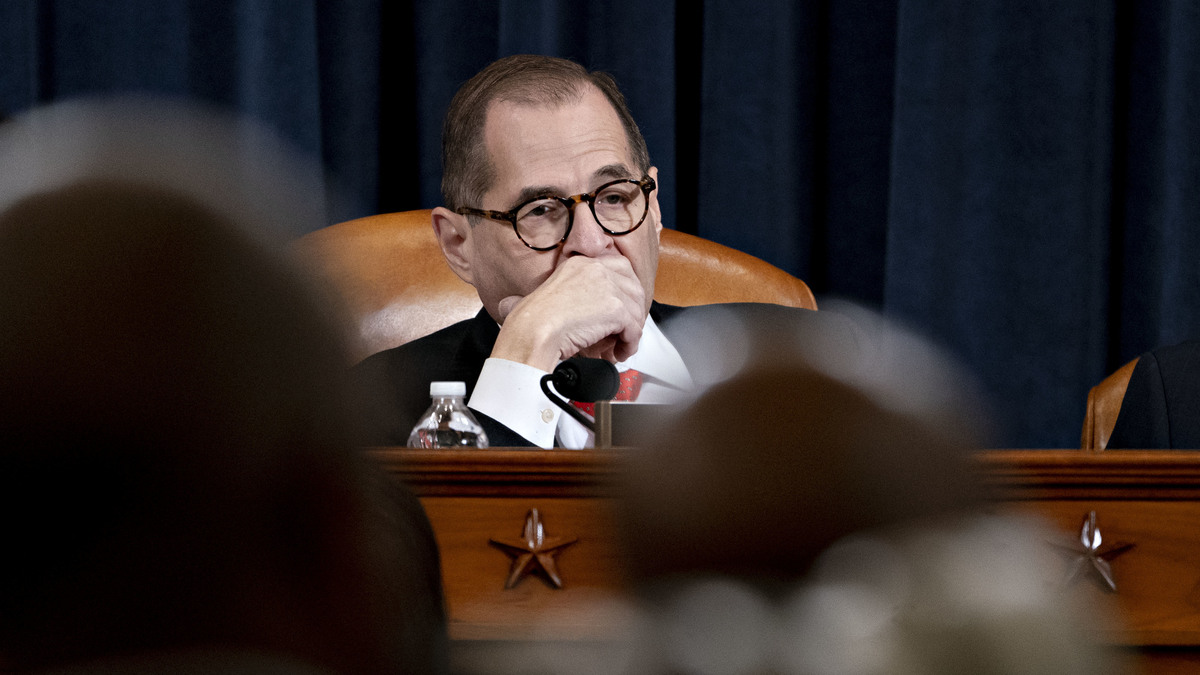 The committee rejected Jordan's amendment on a party line vote.

Rep. Matt Gaetz, R-Fla., then offered an amendment that alluded to the son of former Vice President Joe Biden, Hunter, and the Ukrainian company that paid him for a time.

Gaetz also read from a magazine profile that described Hunter's alleged drug use and the discovery of drug paraphernalia in his rental car. Democrats don't want to focus on what Gaetz called the true corruption here — that which involved the Bidens and Ukraine. 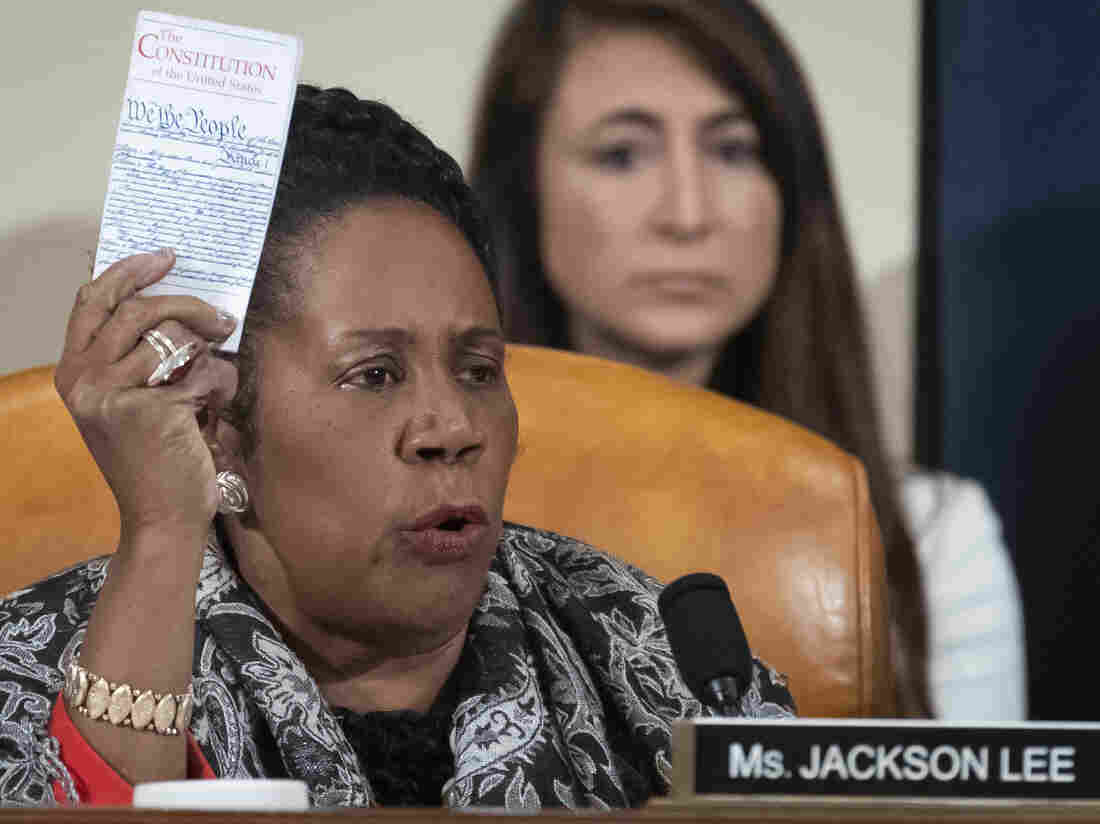 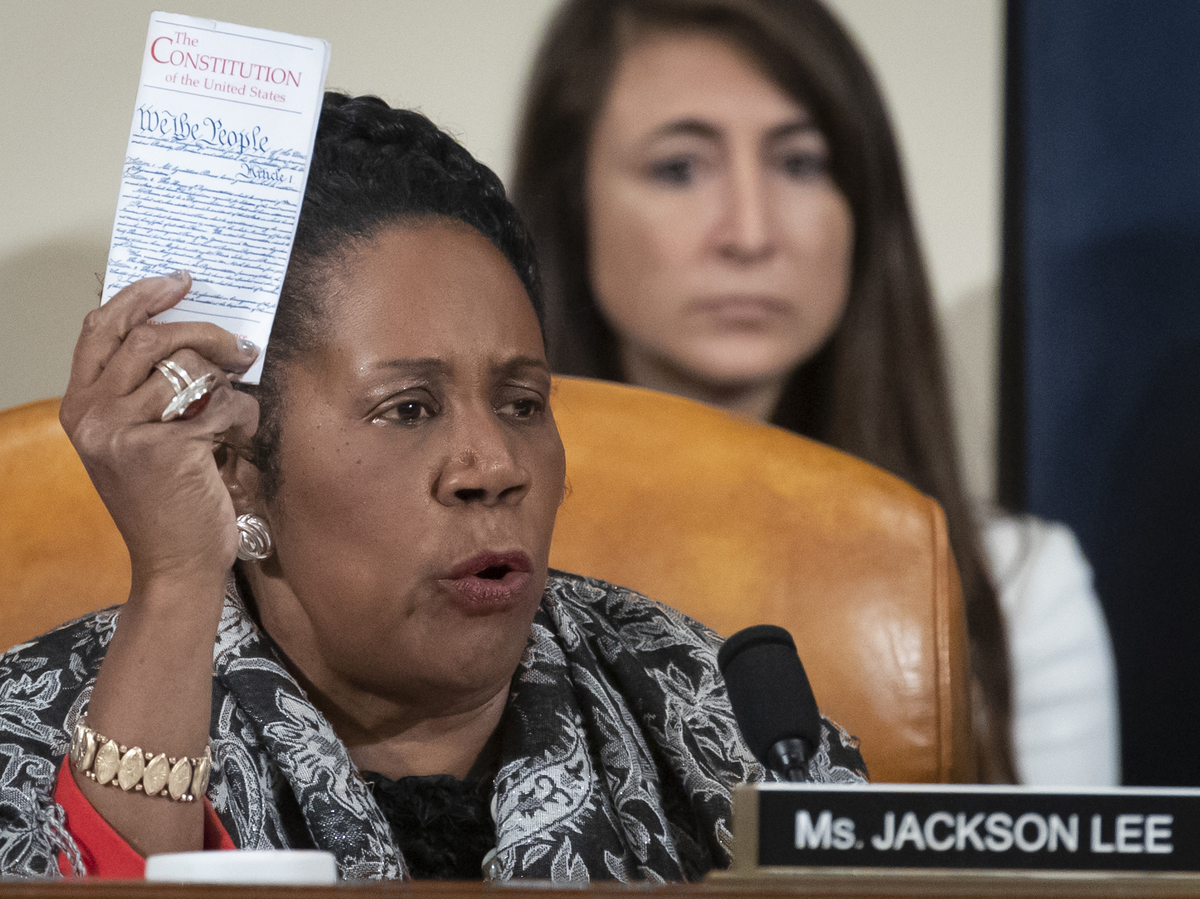 House Judiciary Committee member Rep. Sheila Jackson Lee holds up a Constitution as she speaks during a Thursday's hearing.

Rep. Hank Johnson, D-Ga., announced his opposition to Gaetz's proposal, alluding indirectly to reports about Gaetz's arrest in connection with allegedly driving under the influence. Those charges were dropped.

"The pot calling the kettle black is not something we should do," Johnson said.

And so ran the hearing.

Democrats control the majority in the committee and in the full House. They can control the text of the legislation.

House Speaker Nancy Pelosi, D-Calif., said on Thursday that she is leaving it up to members about how to decide to vote when the time comes.

"I have no message," she said, alluding to the practice of encouraging members to vote a certain way via an officer in the legislature known as the "whip."

"We are not whipping this legislation nor do we ever whip something like this," Pelosi said.

Continued the speaker: "People need to come to their own conclusions. They've seen the facts as presented in the Intelligence Committee. They have seen the Constitution as they know it they take an oath to protect and defend it ... They'll make their own decisions. I don't say anything to them."

Minority Whip Steve Scalise, R-La., meanwhile, circulated a note to members on Thursday that featured a line in red with the key word emphasized in all-capital letters: "Whip Scalise recommends a NO vote."

The full House could vote sometime next week on impeachment. If the measure passes, it would launch the trial in the Senate, expected next month.

Republicans control the Senate and they're expected to acquit Trump.

Trump has called the proceedings a "witch hunt" and "failing." He dubbed it "impeachment lite" and "the lightest impeachment in the history of our country by far."

The two articles Democrats introduced are for abuse of power and obstruction of Congress. The abuse of power charge centers on a pressure campaign carried out against Ukraine.

Multiple witnesses testified to an effort to get Ukraine to announce investigations into conspiracy theories about the 2016 campaign and into the Bidens.

The funds were eventually released; the White House meeting still has not taken place.

The obstruction of Congress charge owes to Trump's broad directive to block witnesses from testifying and documents from being released in connection with the Ukraine matter.

Wednesday's hearing notably was in prime-time television viewing. Polling has barely budged any views. By a 45% to 44% margin, Americans were split on whether Trump should be impeached and removed, according to the latest NPR/PBS NewsHour/Marist poll.

That split also was on full display Wednesday night when the markup began.

Democrats were firm in their view that the president tried to "cheat" in the 2020 election by soliciting foreign interference in U.S. elections — and should be impeached and removed from office.

"In pressuring Ukraine for a personal favor, President Trump both betrayed our national security and attempted to corrupt our elections," Nadler said.

Republicans, on the other hand, were dug in on their view that this impeachment is simply about politics, that Democrats have sought to impeach Trump since he was elected and that Trump committed no specific criminal act.

"We have been on this path since November 2016," Collins said. "The only thing that's changed is your desire to impeach the president when you became the majority."