Accessibility links
Review: 'Bombshell' Needed Less Makeup And More Story Bombshell features some eerie imitations of figures involved in the Fox News harassment allegations that brought down Roger Ailes. But star-studded though it is, it doesn't quite hold together.

'Bombshell' Imitates, But Fails To Enlighten

'Bombshell' Imitates, But Fails To Enlighten 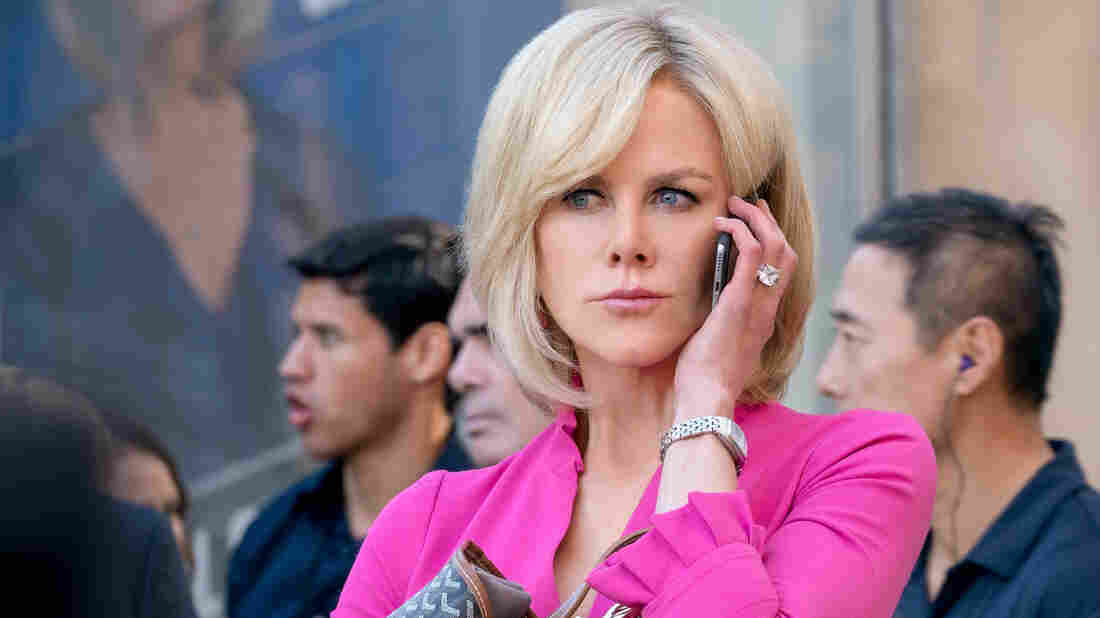 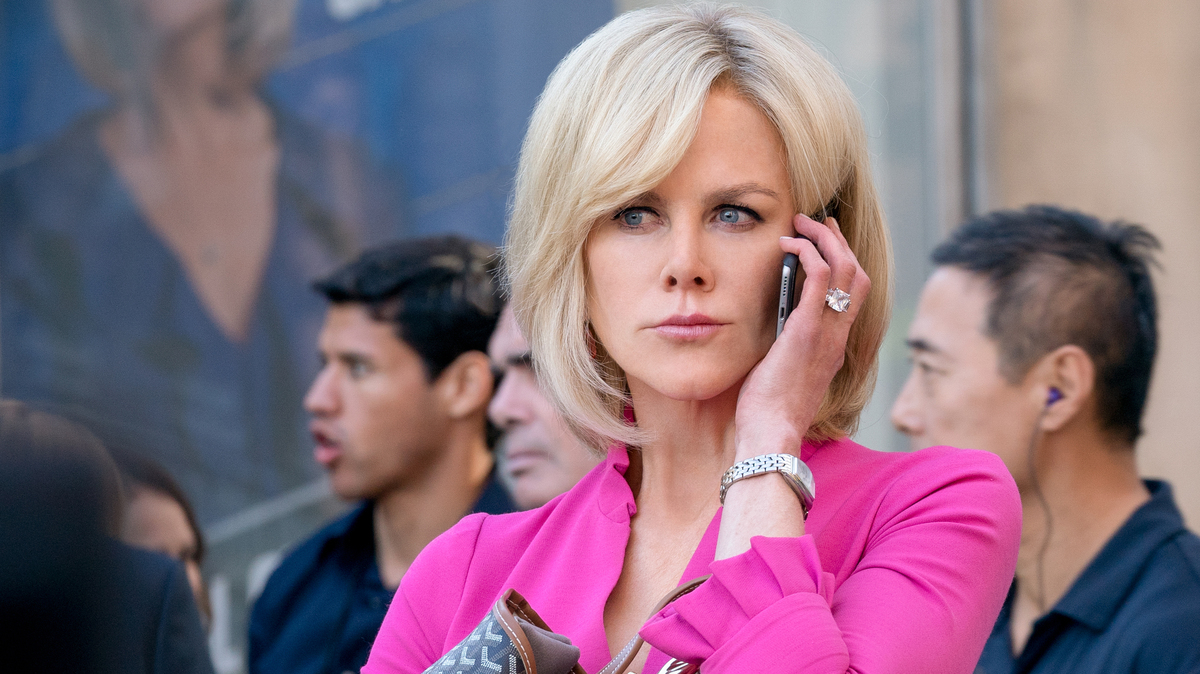 There's something distastefully playful about the title Bombshell being attached to a film about the sexual harassment scandal that, in a matter of weeks, led to the resignation of hugely powerful Fox News chief Roger Ailes in 2016. Sure, former anchor Gretchen Carlson's lawsuit was a bombshell in the news sense; so was the fall of the once-untouchable Ailes. But the three women at the center of the story of the film — Carlson (Nicole Kidman), Megyn Kelly (Charlize Theron) and the fictional young and eager producer Kayla (Margot Robbie) — are all attractive blondes. Calling a film about their sexual harassment Bombshell introduces a flat, sexpot stereotype into the story before a single scene is shown. It's not a good start.

This is how Bombshell feels throughout: It's less awful than it is ungainly. It has a few strong moments, mostly courtesy of Robbie, but it's both underwhelming and overworked, inelegantly structured and missing something fundamental at the core.

The script from Charles Randolph explains Fox News largely via a walk-and-talk in which newbie Kayla is walked through the newsroom by the more experienced Jess (Kate McKinnon), who advises her that a Fox News story is whatever will "titillate and frighten." Lumps of similar "let me tell you how it works around here" expository dialogue come and go, but while the film offers this description of the outlet's outlook, it lacks a point of view about any nexus between how Fox News functions and any occurrences of harassment there. The film's relatively light critique of Fox and its story of sexual harassment run on parallel tracks but don't intersect.

Maybe that's intentional: Maybe it's a way to underscore that sexual harassment is not acceptable in any environment, however you feel about the work that environment produces. But it means that there's not a lot here that isn't found in a lot of other stories about sexual harassment, which means a lot of potentially interesting ground is left unexplored. (That's aside from the fact that there will certainly be people who simply cannot find these particular women to be sympathetic.)

It's not a film without arrows in its quiver. To say that Bombshell has a large and talented cast is an understatement, and at the top of that cast are Kidman, Theron and Robbie. Regrettably, Randolph and director Jay Roach don't allow these women to interact very much. Carlson was indeed the accuser who set this sequence of events in motion after she left Fox, but the period that makes up the bulk of this film, between her lawsuit and Ailes' departure, means Kidman seems strangely isolated from the rest of the story, with Carlson at home riding her exercise bike or talking to her lawyer, rarely crossing paths with the rest of the cast.

That supporting cast is full of recognizable faces, to the point of distraction. And, simply because of the limitations of screen time, most are underutilized. Rob Delaney as Kelly's producer, Connie Britton as Ailes' wife, Mark Duplass as Kelly's husband, D'Arcy Carden as another producer, Allison Janney as lawyer Susan Estrich, Alanna Ubach as Jeanine Pirro, Robin Weigert and Stephen Root as Carlson's attorneys ... it's a lot of powerhouse actors seen for only a few minutes, and that's before you consider drop-ins like Marc Evan Jackson as Chris Wallace (!), Anne Ramsay as Greta Van Susteren, and Malcolm McDowell as Rupert Murdoch. The one that pushes the whole thing over the line may be Richard Kind buried in a lot of prosthetics playing Rudy Giuliani — not because there's anything wrong with the performance, but because it comes at the moment when all this casting is beginning to seem like a stunt.

Despite all these portrayals of real and prominent people, the most successful story — perhaps because it's not burdened with any obligation to imitate — is Kayla's. In a film that struggles to hit emotional notes, the scene in which Kayla first experiences harassment at the hands of Ailes (as played by John Lithgow) is a heartbreaker, with her humiliation and disillusionment brutally believable. Robbie is also excellent in a later phone-call scene with McKinnon, and in a perfect world, this might have been primarily her story.

In fact, the balance of the three stories seems almost backward. Most of our time is spent with the film's version of Megyn Kelly as she decides whether to join Carlson and reveal harassment by Ailes years earlier. There's less energy put into the stories of how Carlson came to be the first accuser and how Kayla is being harassed in the present, and more put into the arguably less compelling story of a long calculation about whether to back up an accuser who's already taken the step of filing a lawsuit. There's quite a bit of time given to the adjacent tale of Kelly being at odds with then-candidate Donald Trump; perhaps that time would have been better used on the stories in the newsroom.

Bombshell isn't bad as much as it is just ... off. It's not structured well, it misses the most interesting angles on the story it's telling, it's a little too fond of oh-hey-look casting, and the headliner performances find similarities to real people more successfully than they find emotional resonances. There's too much "Fox News works this way!" and not enough "What is it like to go public about harassment here, specifically?" What's left is a couple of eerie recreations of famous figures, but not a lot more that's special enough to stick.