Accessibility links
Emoluments Lawsuits Against Trump Enter Key Stage In Front Of Appeals Courts The suits allege that Trump is violating the Emoluments Clause of the Constitution — and demand that the president divest from his private dealings. 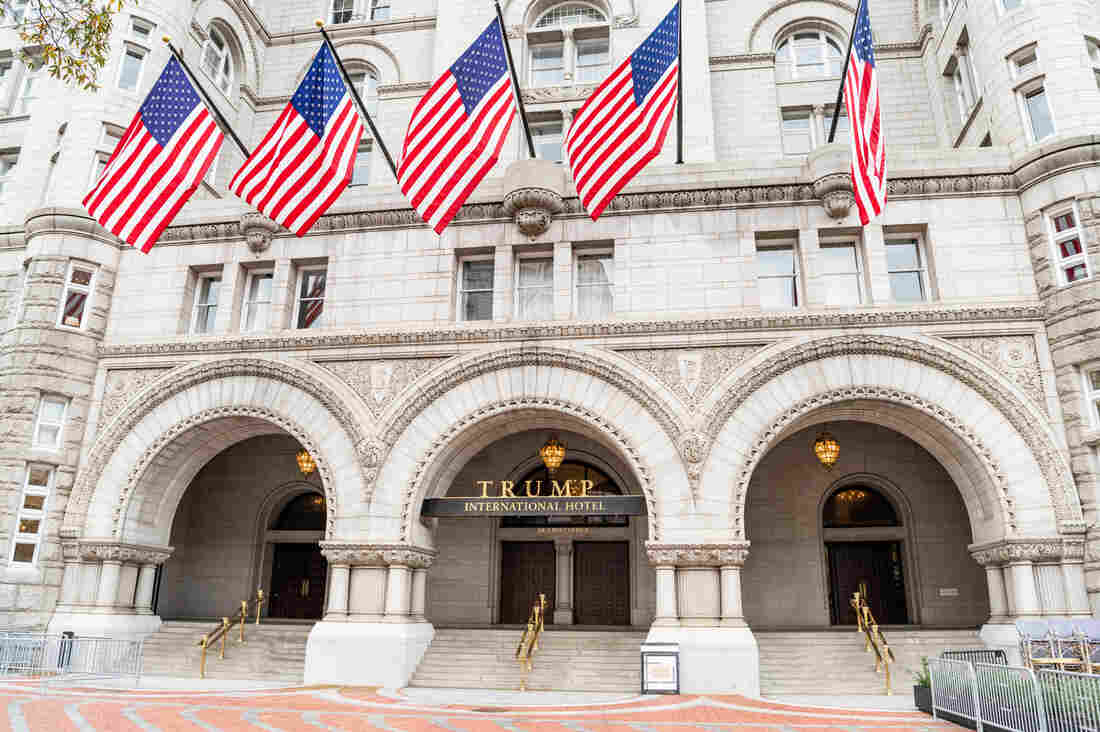 The Trump International Hotel in Washington, D.C., is the focus of one of three pending lawsuits claiming the president is violating the Constitution by not divesting from his business empire. Michael Brochstein/SOPA Images/LightRocket via Getty Images hide caption 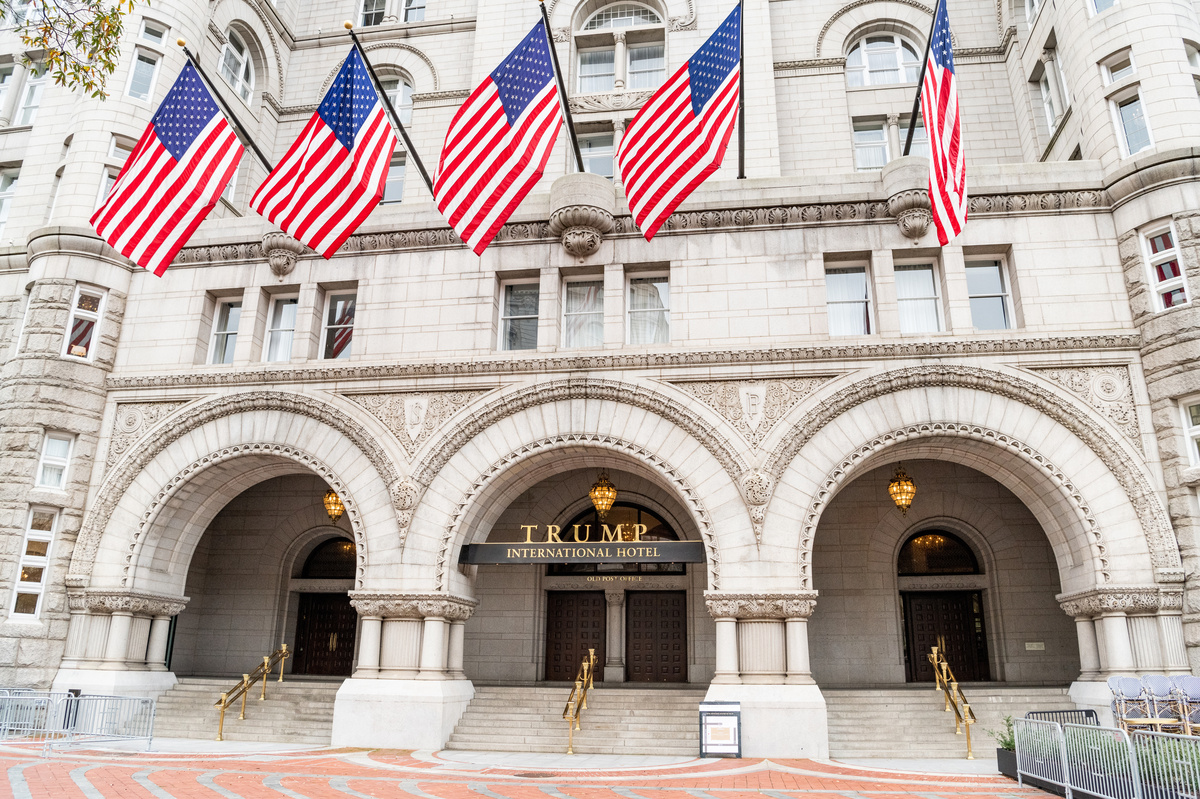 The Trump International Hotel in Washington, D.C., is the focus of one of three pending lawsuits claiming the president is violating the Constitution by not divesting from his business empire.

Is Trump profiting off the presidency?

It's a question that has dogged President Trump since he first took office, and it is gathering momentum again, even as the impeachment saga and Trump's dealings with Ukraine dominate the headlines.

A trio of lawsuits claiming that Trump's business dealings are violating the Constitution have been ping-ponging in federal courts for months, but all three cases are now advancing to critical stages.

On Thursday, the full U.S. Court of Appeals for the 4th Circuit in Richmond, Va., will hear arguments to reconsider a ruling from a three-judge panel of the court, which in July dismissed the case over lack of standing.

Lawyers representing the attorneys general of Washington, D.C., and Maryland, which brought the lawsuit, are optimistic. They are hoping the court will hand them a victory in the form of a court order declaring that Trump is in violation of the Constitution's Emoluments Clause, an anti-corruption provision that prohibits federal officials from receiving gifts or money from state and foreign governments.

"From the first moment he became president, Trump was in violation of the Foreign Emoluments Clause," says ethics lawyer Deepak Gupta, who is on the legal team representing the states that are suing. "He is openly doing so in a rather brazen way, in a way no other American president has ever done."

The case in front of the appeals court on Thursday centers on Trump's International Hotel, just blocks away from the White House. Officials from Georgia, Kuwait, Saudi Arabia and other countries have collectively spent hundreds of thousands of dollars at the hotel, profits the lawsuit says are funneled directly to Trump's business coffers.

The states say planners of major events are booking gatherings at Trump's hotel over their own taxpayer-owned facilities, making them lose profits because, they allege, doing business at Trump's hotel is now seen as a way to curry favor with the president.

Such a dynamic was on display in the infamous July 25 call between Trump and Ukrainian President Volodymyr Zelenskiy, which helped ignite the impeachment inquiry.

On the call, Zelenskiy mentions to Trump that his friends are patronizing Trump businesses. "Last time I traveled to the United States, I stayed in New York near Central Park, and I stayed at the Trump Tower," Zelenskiy told the president.

It is the exact kind of arrangement, Gupta says, that the country's Founding Fathers were trying to avoid by including the Emoluments Clause in the Constitution.

"To this day, we still have not seen an accounting of what payments President Trump is getting through his business and from which foreign governments. And that's something everyone should be concerned about," Gupta says.

In a legal filing, Trump's lawyers said the president's company is in discussions to possibly sell the rights to the Trump hotel blocks away from the White House. If it is sold to a new owner, the case brought by the District and Maryland would have a challenging time keeping the legal battle alive, since, without Trump's stake in that hotel, the central pillar of the case will collapse.

Right now, the Trump administration is hoping to persuade the appeals court to hand them a victory for arguing that the states do not have standing, or the legal right to sue in the first place.

"These claims also are speculative because first, they assume that the operation of a single luxury hotel in downtown Washington, D.C., would have an extraordinarily wide-ranging impact on D.C.'s and Maryland's economies, and second, they are necessarily dependent on the independent choices of third-party customers not before the Court," the Trump administration wrote in a brief.

The arguments on Thursday will be in front of the full 4th U.S. Circuit Court of Appeals. The hearing follows a ruling in July in which a three-judge panel of the court sided with Trump and ordered the dismissal of the lawsuit over a lack of standing. All three judges on that court were appointed by Republican presidents. The full appeals court has judges appointed by presidents of both parties.

A clear violation of the Constitution, or a misreading?

If the legal teams suing Trump get their wish, a full look at Trump's business dealings with foreign governments will be exposed.

In addition to the case before the appeals court on Thursday, Gupta is on the legal team on another pending emoluments lawsuit in New York filed against Trump by competing restaurants and hotels.

That case is before a federal district judge and nearing the discovery phase, which is when parties can begin issuing subpoenas and start other types of evidence gathering.

But the Trump administration has successfully delayed that process for months by fighting through appeals.

The attacks from Trump administration lawyers have mostly centered on procedure, pushing back on the suits by saying the suing parties do not have the legal right to make it through the courthouse door in the first place.

Trump's attorneys have also argued that the legal challenges alleging an emoluments violation are a fundamental misreading of the Constitution.

"Emoluments Clauses were not designed to reach commercial transactions that a President (or other federal official) may engage in as an ordinary citizen through his business enterprises," the administration wrote in legal papers recently, saying the country's Founders "gave no indication that they intended to require officeholders to divest their private commercial businesses in order to assume federal office."

A third case filed by more than 200 Democratic members of Congress is alleging violations of the Emoluments Clause. The lawmakers point to a section of the provision that says foreign emoluments require the consent of Congress, and they argue that the president has not sought their approval.

On Monday, Trump's legal team argued in front of an appeals court that individual members of Congress do not have the right to sue the president, and the panel appeared sympathetic to that position.

Legal scholars say that just getting these cases to survive procedural hurdles is so tricky because it is completely uncharted waters. Before Trump, federal courts had not tested emoluments lawsuits leveled against a U.S. president.

Sen. Richard Blumenthal, D-Conn., who is the lead plaintiff in the emoluments case brought by Congress, says he is hoping for a judicial victory in his case, but that he would be happy to see any one of the three lawsuits force Trump to disconnect himself from his businesses.

"You cannot continue accepting payments and benefits at the hotels and condominiums and rental properties and permits and trademarks all around the world," Blumenthal said in an interview after a court hearing this week, describing the legal outcome he is seeking. "It is not 'you must pay back money.' It is not 'you go to jail.' It is simply 'stop violating the law.' "

Trump has long maintained that he has done enough to separate himself from his business profits. He placed his two eldest sons in charge of the management of the Trump Organization.

But Gupta says the move was "cosmetic" and that the business profits still flow to the president. The best practice, Gupta says, would be for Trump to place his businesses in a blind trust, an arrangement where the business operations and profits of a company are handed over to an independent third party to avoid conflicts of interest, such as making political decisions that would be a boon for business.

President Jimmy Carter famously did this with his family's peanut business to avoid conflicts.

Trump, meanwhile, made his view of the 18th century clause apparent, telling reporters back in October: "You people with this phony Emoluments Clause."