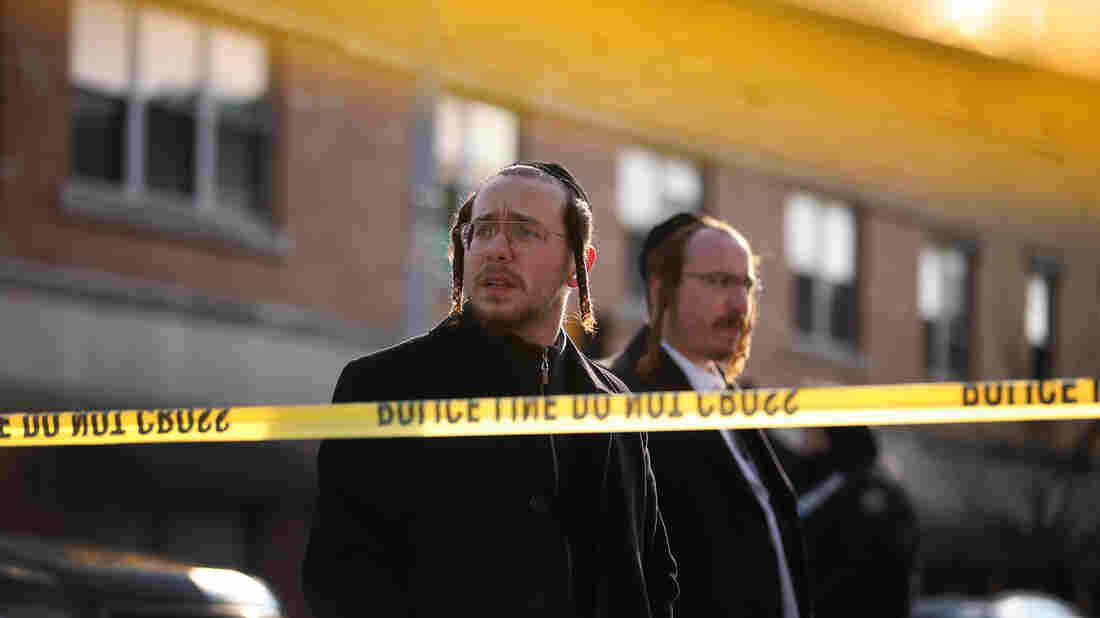 Members of the local Jewish community gather Wednesday outside the JC Kosher Supermarket in Jersey City, the site of what is now being called a potential act of terrorism. Rick Loomis/Getty Images hide caption 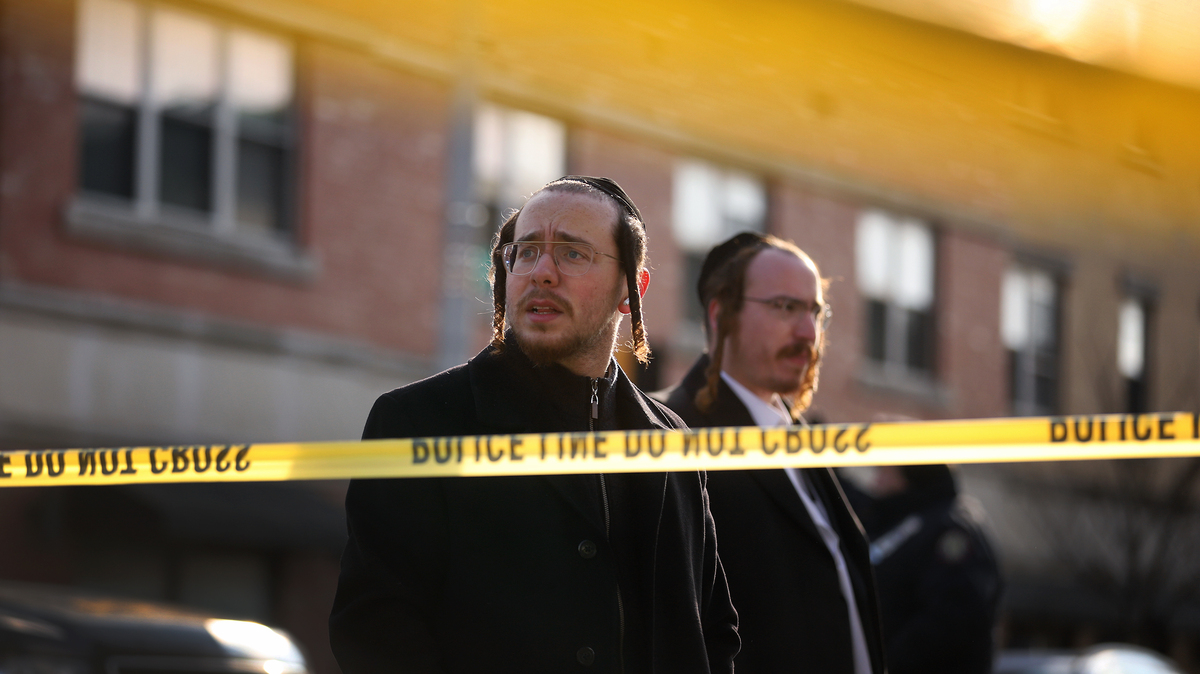 Members of the local Jewish community gather Wednesday outside the JC Kosher Supermarket in Jersey City, the site of what is now being called a potential act of terrorism.

Since a pair of shooters opened fire Tuesday in Jersey City, N.J., the state's attorney general, Gurbir Grewal, had been reluctant to label the assault on a local kosher market specifically as an anti-Semitic act. As recent as Wednesday afternoon, even after identifying the shooters, Grewal said authorities were still not in a position to definitively assign a motive.

By Thursday, though, he was ready to say it.

"At this point, the evidence points towards acts of hate," the attorney general told reporters at a joint news conference with other law enforcement officials. "I can confirm that we're investigating this matter as potential acts of terrorism, fueled both by anti-Semitism and anti-law enforcement beliefs."

The announcement comes after two days of investigation into attacks that left six people dead — three civilians, one police officer and the two shooters. Grewal said authorities reached their conclusion on the motives of David N. Anderson, 47, and Francine Graham, 50, by interviewing eyewitnesses and identifying "a number of social media accounts that we believe were used by the suspects and purport to espouse certain viewpoints."

"The cowards that took down those innocent victims engage only the folks in that store and in the law enforcement community," said Craig Carpenito, U.S. Attorney for the District of New Jersey, referring to closed-circuit TV footage of the attack. "You could see people walking by. They didn't engage anyone. They were clearly targeting that store. They were clearly targeting the Jersey City Police Department. We don't know why."

At the moment, officials believe the shooters were working alone. Investigators say the attackers subscribed to views consistent with the Black Hebrew Israelites — a black supremacist organization that has been associated with anti-Semitism — although Grewal says investigators have not yet established any formal links between the shooters and the group.

Five firearms were recovered from the scene of the attack — four of which were found inside the market and one inside the U-Haul van that the shooters drove to the location. Grewal said one of the guns inside the store was an "AR-15-style weapon," referring to the controversial weapons that have been used in a number of massacres in recent years, including the shootings in Las Vegas and Newtown, Conn.

Gregory Ehrie, the FBI's special agent in charge in Newark, told reporters Wednesday that police officers had also discovered a viable pipe bomb that the shooters had left behind in their van.

"The FBI will ... continue to investigate this as a domestic terrorism incident with a hate crime bias slant to it," Ehrie said at the news conference Thursday. "We are pressing forward in collaboration with our local, state and federal partners to, again, try to understand the 'why' behind this." 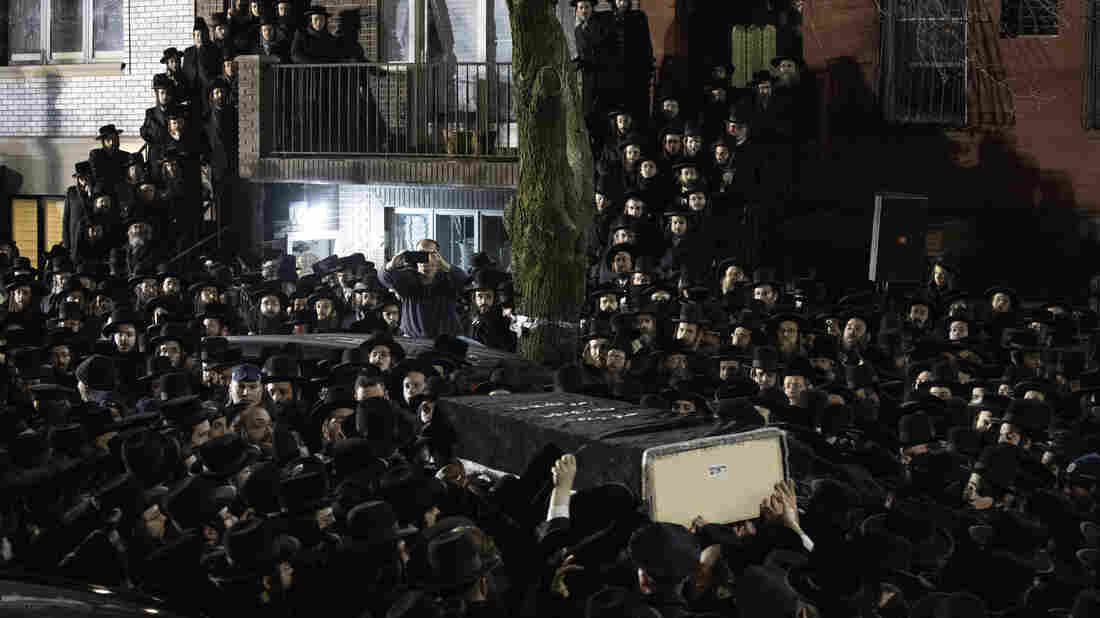 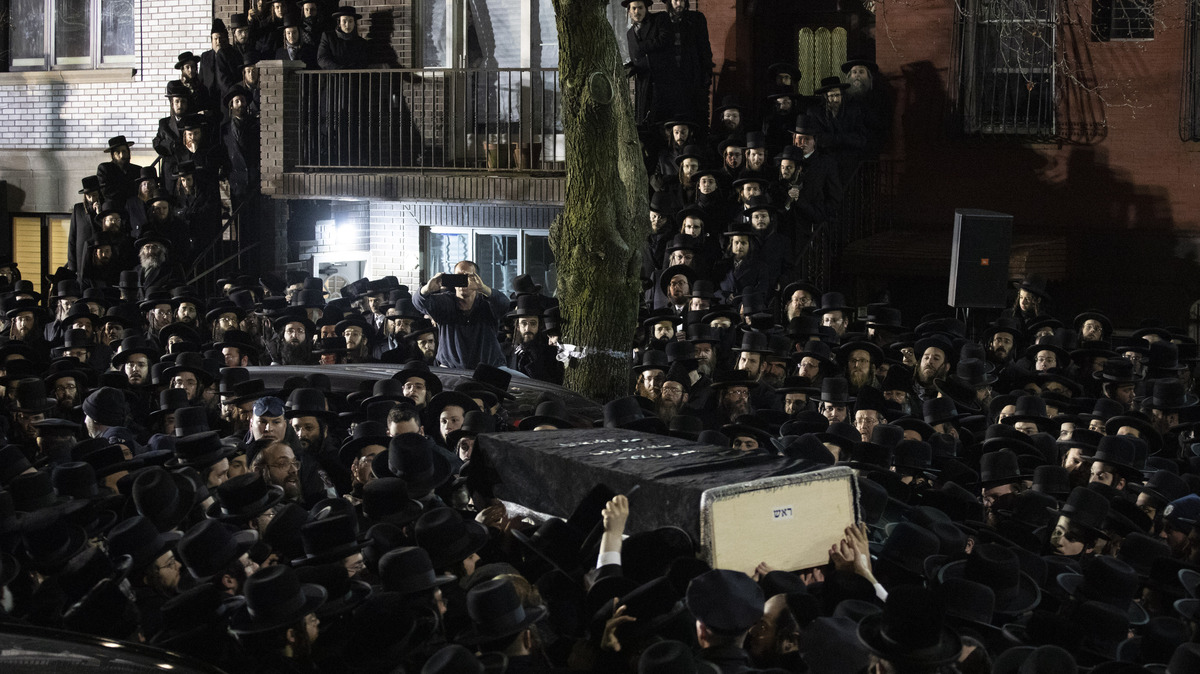 Orthodox Jewish men carry the casket of Jersey City victim Moshe Deutsch outside a Brooklyn synagogue following his funeral Wednesday in the Williamsburg neighborhood of Brooklyn.

As the investigation unfolds, members of the area Jewish community have struggled to grieve for their lost friends and loved ones.

On Wednesday night, thousands of mourners turned out in Jersey City as well as in the Williamsburg neighborhood of nearby Brooklyn for the funerals of Mindel Ferencz, who owned the market with her husband, and her cousin Moshe Deutsch — both of whom observed the Orthodox Jewish faith of Satmar Hasidim.

"Before, we felt more secured," Moshe Blumenberg, a teacher from Union City, N.J., told Fred Mogul of member station WNYC during the Brooklyn memorial. He said the shooting has compounded rampant anxieties about recent anti-Semitic violence.

"We have police; we have everything. Now we see the only one who can protect us is God," he added, "and it's very terrifying." 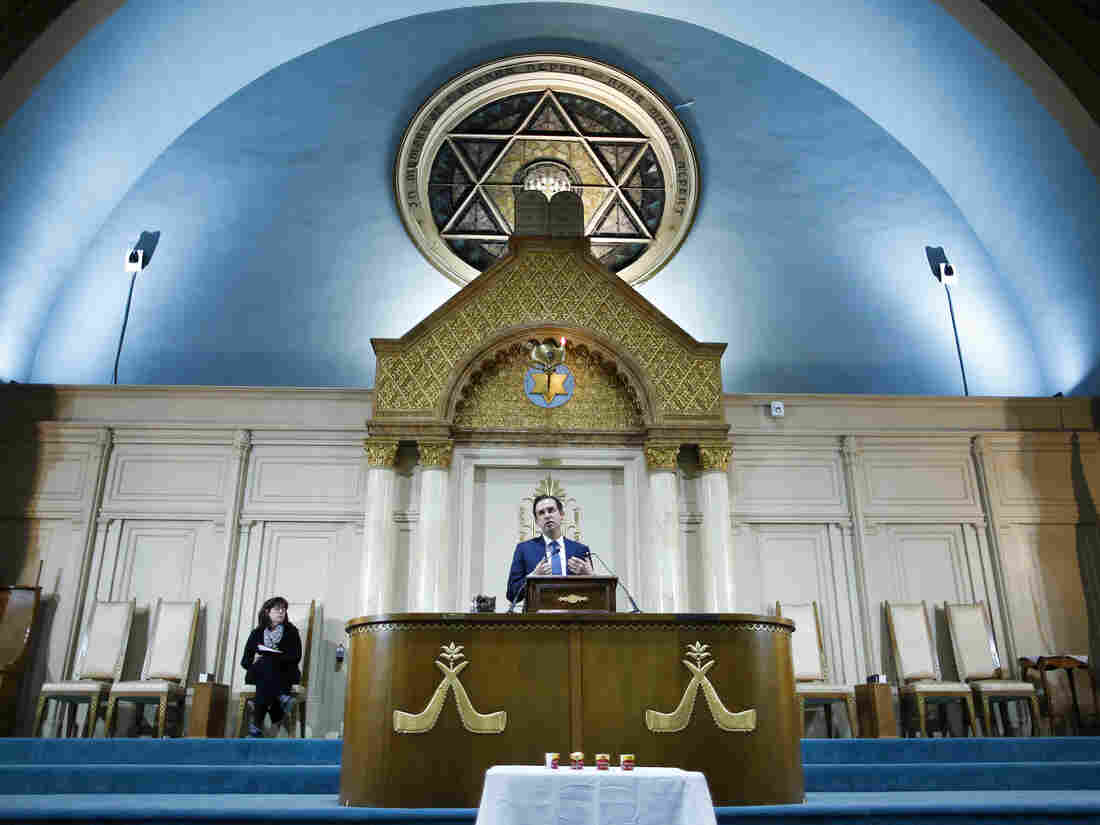 Jersey City Mayor Steven Fulop speaks during a vigil Wednesday for the shooting victims in Jersey City, N.J. Earlier that day, Fulop, who is Jewish himself, made clear to reporters that he believed the attack on a kosher market was an anti-Semitic act: "There is no question that this is a hate crime." Eduardo Munoz Alvarez/AP hide caption 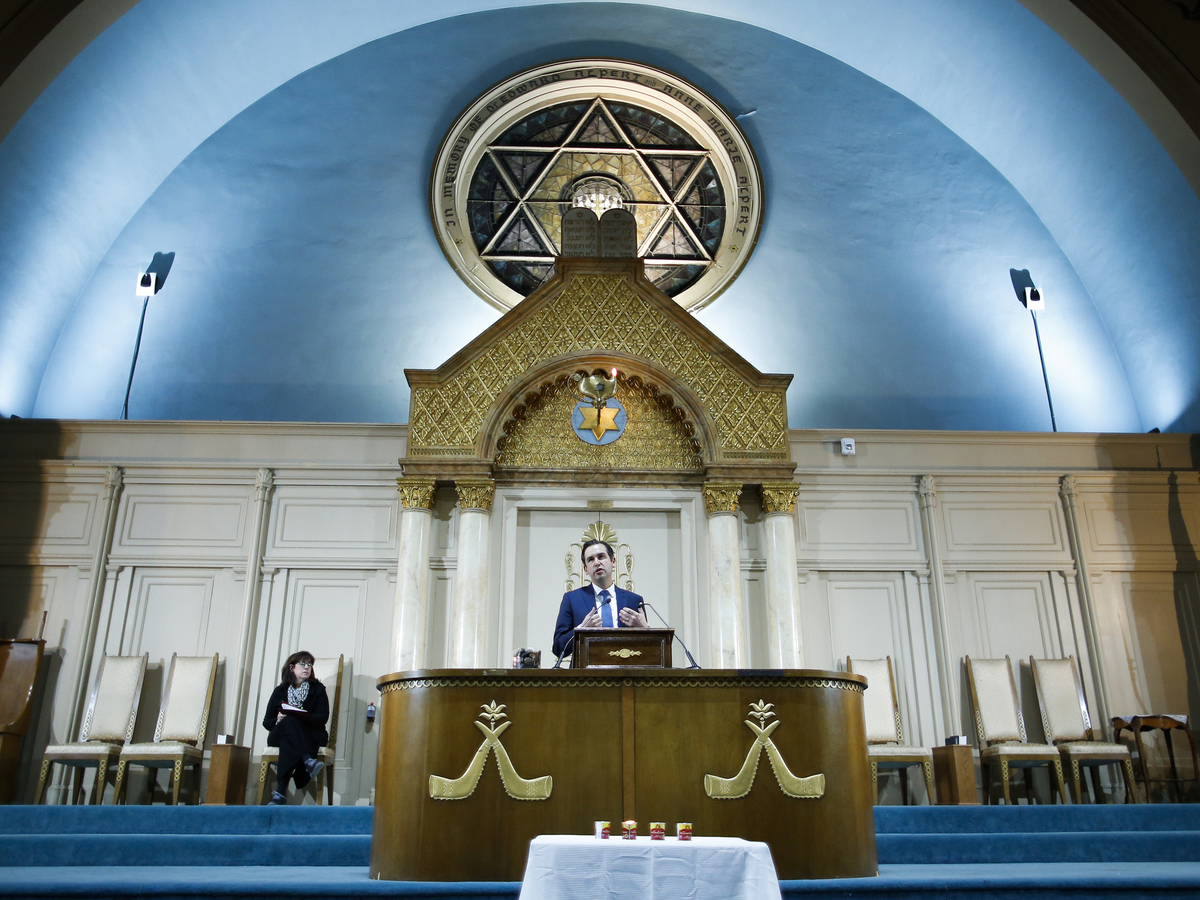 Jersey City Mayor Steven Fulop speaks during a vigil Wednesday for the shooting victims in Jersey City, N.J. Earlier that day, Fulop, who is Jewish himself, made clear to reporters that he believed the attack on a kosher market was an anti-Semitic act: "There is no question that this is a hate crime."

Residents of Jersey City have remarked on underlying frictions in the community between some longtime black residents and Jewish newcomers. The city has been coping with a recent population surge, part of which has been driven by an influx of ultra-Orthodox Jewish residents.

Plenty of city natives have complained of feeling pushed out; some Jewish residents, meanwhile, told WNYC's Arun Venugopal that they've found themselves on the receiving end of anti-Semitic insults or even violence.

Jersey City Mayor Steven Fulop, who is Jewish and who forcefully declared Wednesday that "there is no question that this is a hate crime," expressed relief Thursday that Grewal had joined him in using similar language.

"I'm just glad that we're all here in the same place calling it what it is — that's the only thing that's important," he tweeted after Thursday's news conference. "We do a disservice to Judaism + ppl fighting against hate by not labeling this what it is."

Meanwhile, as of late Thursday afternoon, authorities have raised more than $300,000 for the family of Detective Joseph Seals, the Jersey City police officer killed by the shooters at a separate location before they descended on the market

"Unfortunately, he leaves behind five children. We would anticipate the money would probably be used for education costs for these children growing up," said Steve Lenox, spokesman for Jersey City Police Officers Benevolent Association, one of the organizations behind the fundraising effort. "You know, they lost their hero father — they should want for nothing in coming years as they continue to grow up."

In a previous version of this story, we said crowds gathered in Brooklyn for the funerals of both Mindel Ferencz and Moshe Deutsch. While Ferencz's casket was briefly brought to Brooklyn, her funeral was held in Jersey City.