Accessibility links
Beyond Adam And Eve: Religion And The Gender Binary "It's been my faith in God that guided me to come out of the closet as someone who likes girls, then someone as non-binary," guest Alex Griffin told us. "It was always a feeling of God loving me exactly as I was." 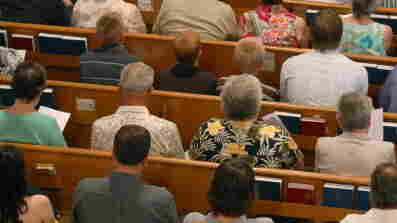 In some religious institutions, there are many gender-specific traditions and norms. But what space is there for gender non-conforming individuals? MYLOUPE/UNIVERSAL IMAGES GROUP VIA GETTY IMAGES hide caption

"Just a heads up so you all can be praying for me: I came out to my parents last weekend about my gender, and it was awful. They literally rolled their eyes at me and laughed. I've been processing all week, but I'm still really sad and angry."

It was posted by Alex Griffin, who recently came out as gender non-binary. They are in their first year of seminary school to become a priest.

Religions have many sacred norms and traditions: including many that are governed by gender. Men's and women's seating in Orthodox temples, restricting priesthood or pastorships to men and more.

Those who believe that one's sex and one's gender are necessarily the same often point to scripture as evidence.

How do we reconcile that with the very existence of people like Alex Griffin?

Or Abby Chava Stein? She grew up as a Hasidic boy, and the ultra-religious sect of Judaism does not acknowledge the existence of transgender people. She followed the life path set out for her — marrying at 18, becoming a father and a rabbi. But today, she lives as a transgender woman, and is no longer part of the Hasidic community. She lays out her journey in a new memoir called Becoming Eve: My Journey from Ultra-Orthodox Rabbi to Transgender Woman.

We spoke with Griffin and Stein about how religious institutions are reckoning with society's evolving views on gender.