Accessibility links
In Sri Lanka, China's Building Spree Is Raising Questions About Sovereignty A Chinese state-owned operator took control of a port on a 99-year lease after Sri Lanka defaulted on its loans. An adviser to Sri Lanka's president said the government wants China to "give it back." 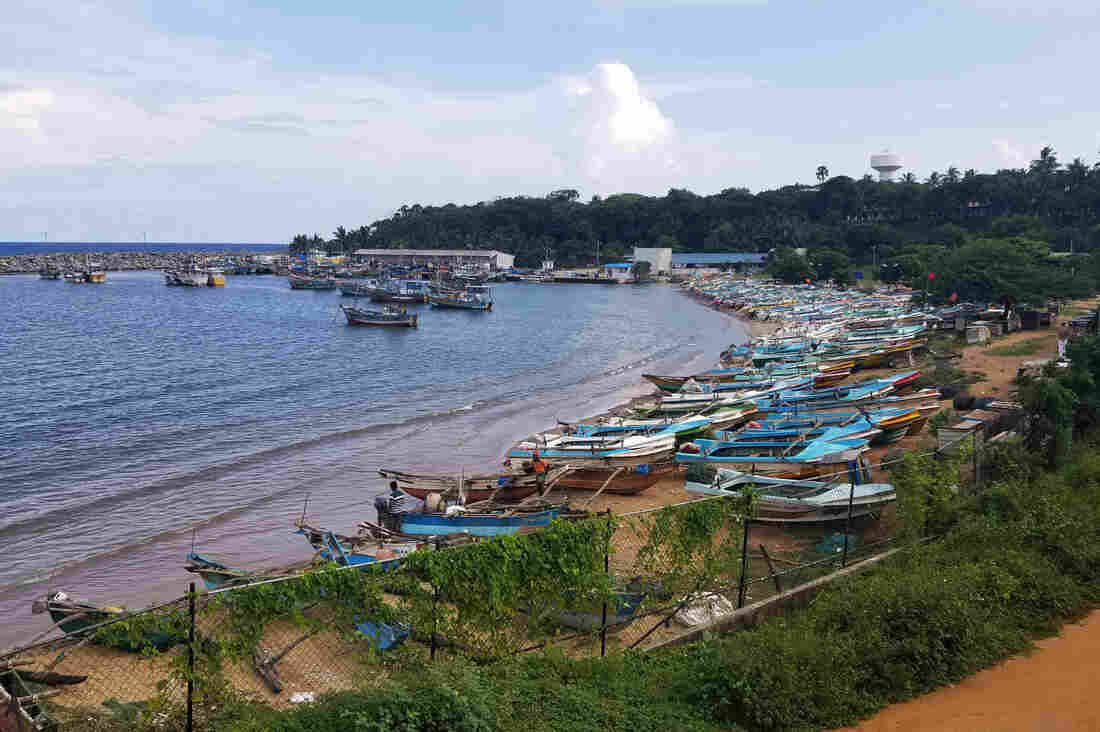 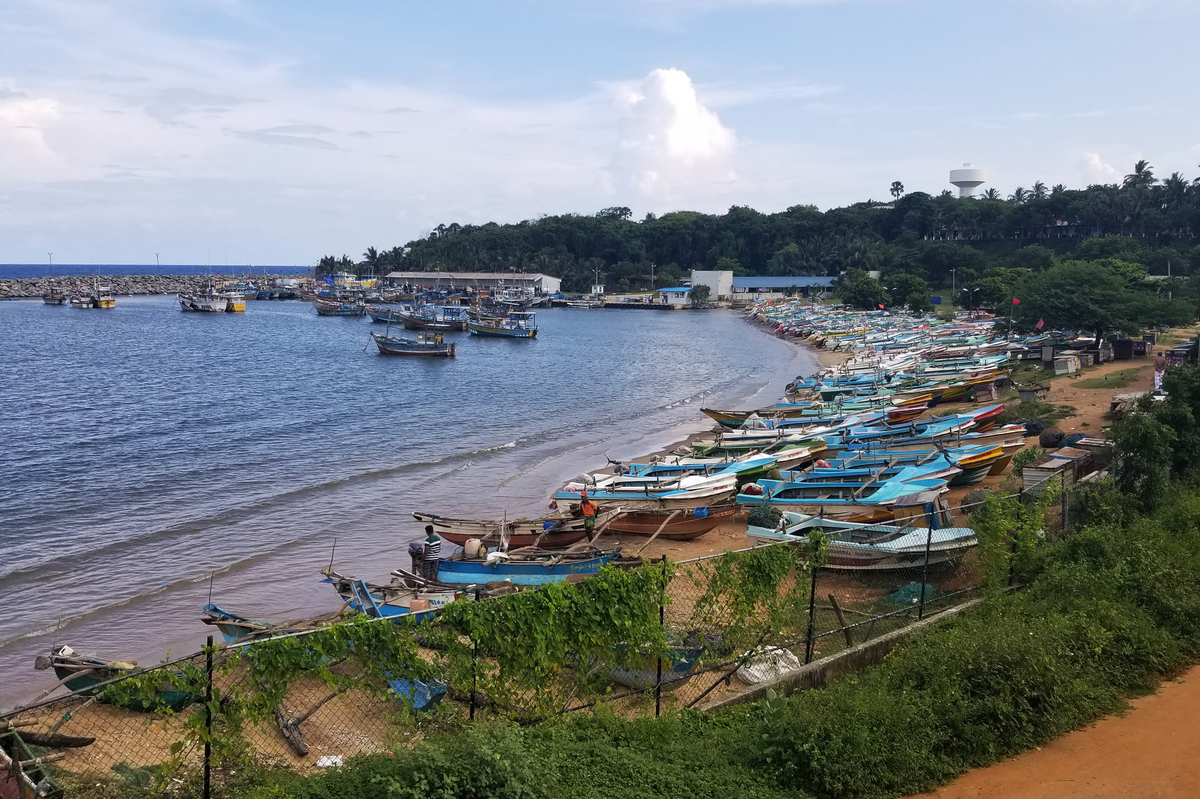 China has built a massive international shipping port a few miles from the old fishing port of Hambantota, Sri Lanka.

Less than 2 miles down the coast, towering blue-and-white cranes dwarf the lighthouse, as does a contemporary glass and stucco office building — the Chinese headquarters of a sprawling new port complex.

A sleepy fishing hub since ancient times, the Sri Lankan town of Hambantota is located just a few nautical miles from where tens of thousands of container ships now pass annually, plying the Indian Ocean between Asia and the Middle East. It's one of the busiest shipping lanes in the world — one that Beijing is eager to control.

So when the Sri Lankan government decided in 2002 to build a new port in Hambantota, China offered $1.1 billion in loans. It also supplied Chinese contractors. And when the port opened in late 2010 and immediately began losing money — so much that Sri Lanka couldn't even make interest payments on those loans — China offered a solution: foreclosure. 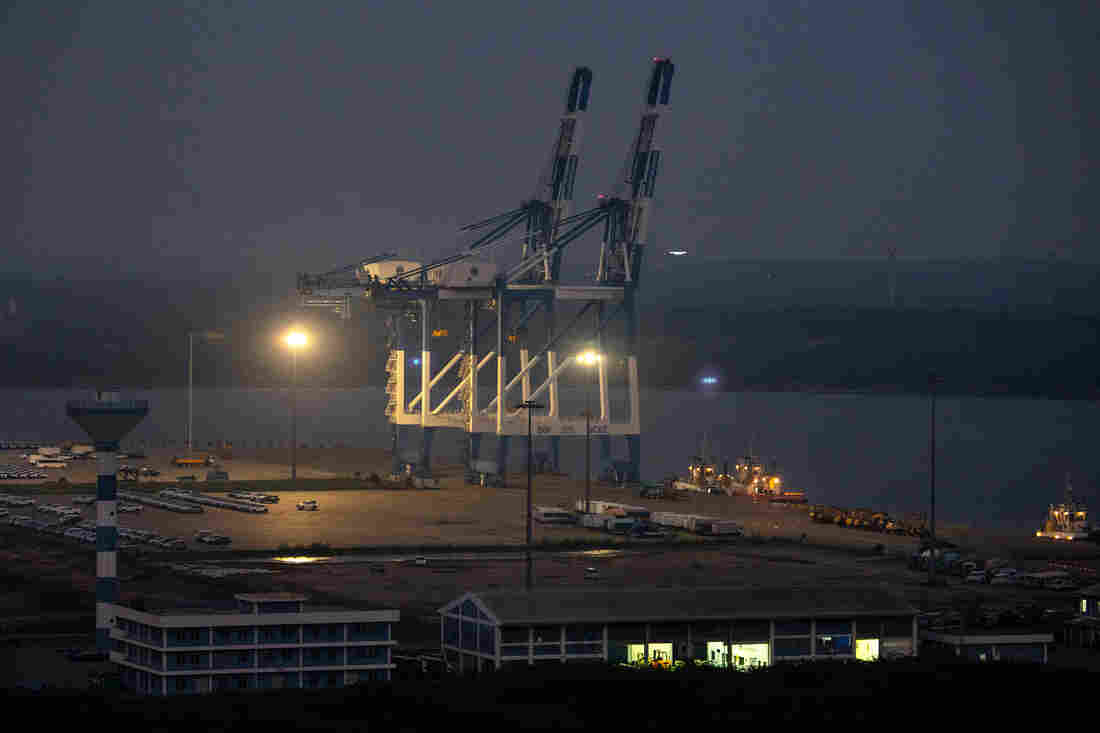 The Hambantota port, pictured in 2018, opened in late 2010. After the Sri Lankan government defaulted on its loans, a Chinese state-owned operator took control of the port on a 99-year lease. Paula Bronstein/Getty Images hide caption 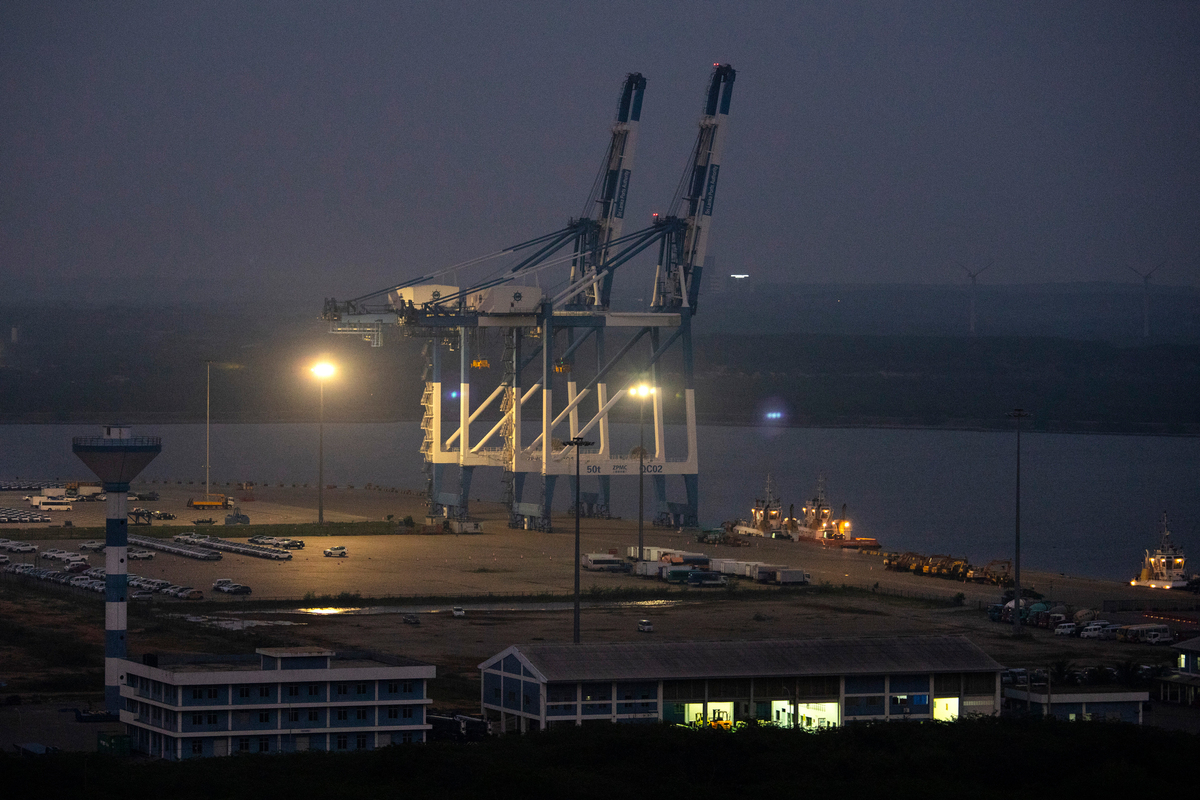 The Hambantota port, pictured in 2018, opened in late 2010. After the Sri Lankan government defaulted on its loans, a Chinese state-owned operator took control of the port on a 99-year lease.

Beijing has bankrolled infrastructure projects in dozens of countries as part of its Belt and Road Initiative, one of the biggest construction efforts in human history. The difference in Hambantota is that the Chinese state-owned operator physically took control of the port in late 2017 — on a 99-year lease — after the Sri Lankan government defaulted on its loans.

That has raised questions about sovereignty. An adviser to Sri Lanka's newly elected president recently said the government wants China to "give it back."

When U.S. and Indian officials accuse China of bullying poor countries with onerous loans, Hambantota is their oft-cited example.

"China uses so-called debt diplomacy to expand its influence. The terms of [its] loans are opaque at best, and the benefits invariably flow overwhelmingly to Beijing," Vice President Pence told the Hudson Institute, a think tank in Washington D.C., in October 2018. "Just ask Sri Lanka, which took on a massive debt to let Chinese state companies build a port of questionable commercial value. It may soon become a forward military base for China's growing blue-water navy."

Hambantota port may have been of "questionable commercial value" when it belonged to Sri Lanka. But its Chinese operators say that business is picking up. And they're set to control it for 97 more years.

"China has never been a historical enemy"

China also has control over 15,000 acres of land around the Hambantota port — and it wants more. The district stretches about 75 miles along Sri Lanka's southern coast and is home to some 600,000 residents. Until the port was built, its economy depended on fishing, farming and tourism.

Just outside the Chinese zone, Dharmasena Hettiarachchi, 55, farms his family's ancestral land by a freshwater lake dotted with lily pads. He has coconut palms, lemon trees, a banana grove and more than a dozen rows of gigantic climbing beans.

Over the past year, Hettiarachchi says local officials have kept asking him and his neighbors to sell their land to create a Chinese-run industrial zone on this watershed. The residents are putting up a fight, and Hettiarachchi is confident they can hold out. 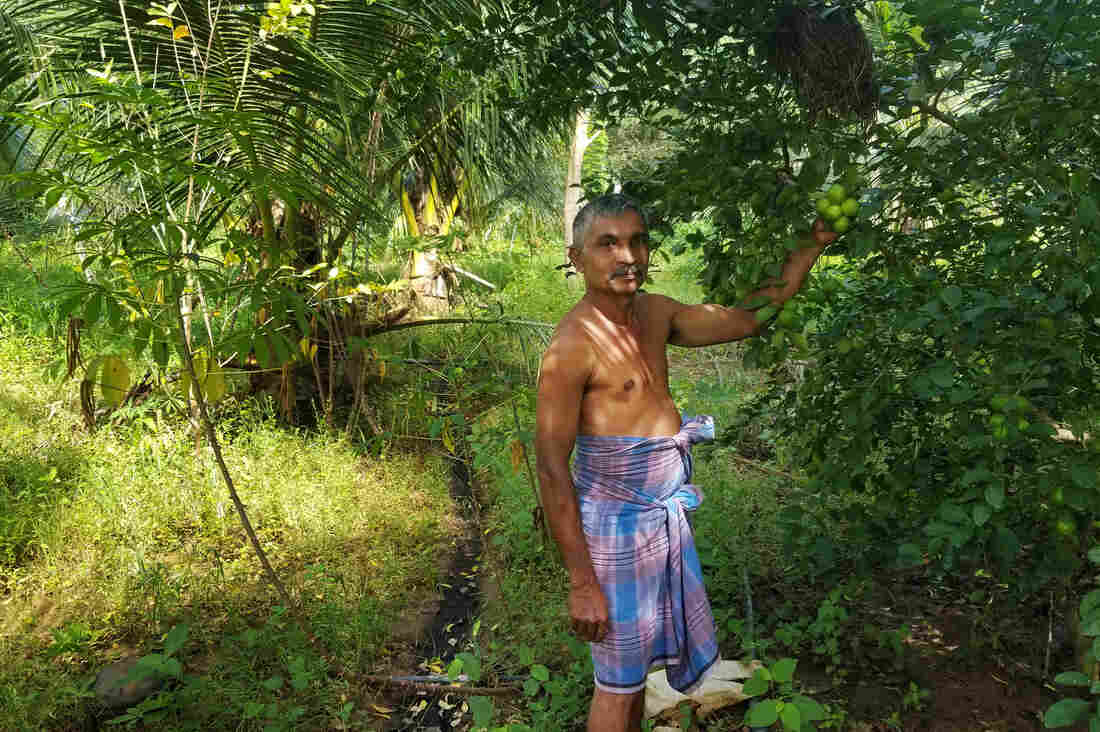 "I don't want to sell away my children's future," says farmer Dharmasena Hettiarachchi. He refuses to part with his family's land to make way for a Chinese industrial zone in Hambantota, Sri Lanka. Lauren Frayer/NPR hide caption 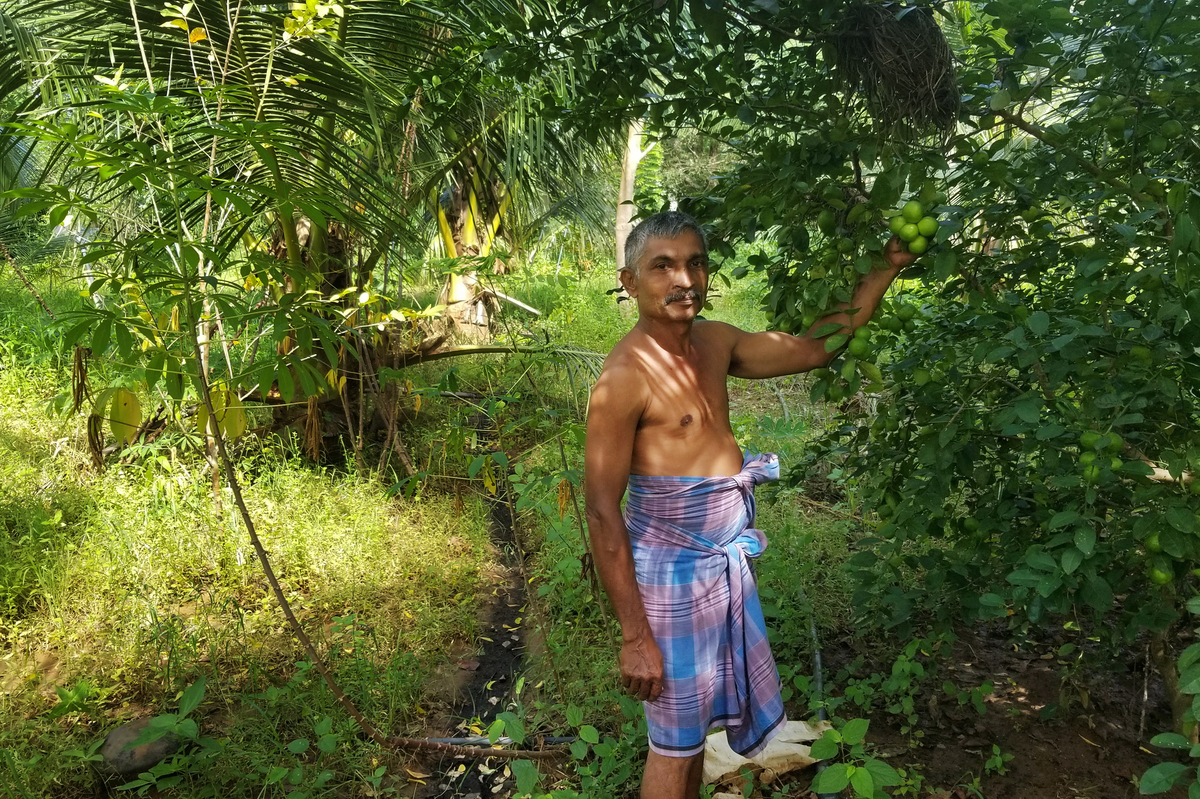 "I don't want to sell away my children's future," says farmer Dharmasena Hettiarachchi. He refuses to part with his family's land to make way for a Chinese industrial zone in Hambantota, Sri Lanka.

Polling data is scarce, but experts believe most Sri Lankans across the country trust China and are happy about its many investments in their country — from the Hambantota port in the south to a coal-fired power plant in the northwest and a new concert hall and port city in the capital, Colombo.

"Many Sri Lankans see all this construction, and they're proud of their district having these facilities. What people don't seem to understand are issues of environmental impact, human rights and labor," says Bhavani Fonseka, a lawyer at the Centre for Policy Alternatives, a think tank in Colombo. "If you go to any project site, it's the Chinese who have the jobs. Job creation hasn't come for locals. Will these [Chinese] workers settle here? Is this becoming a colony? Very few people are asking these questions."

There's also less unease in Sri Lanka about China than there is about other countries. Britain was Sri Lanka's colonial ruler. The United States is known for its military interventions. India, with 1.3 billion people, is Sri Lanka's closest neighbor and has long sought to dominate the much smaller island nation of 22 million just off its southern shore.

"When India or the West get involved in Sri Lankan affairs, there is suspicion as to what the motive is. Is it to divide the country? Is it [to] exploit, subjugate us?" says Jehan Perera, executive director of the National Peace Council, another think tank in Colombo. By contrast, Sri Lankans view Chinese investment as "essentially benign," he says. "China has never been a historical enemy of this country." 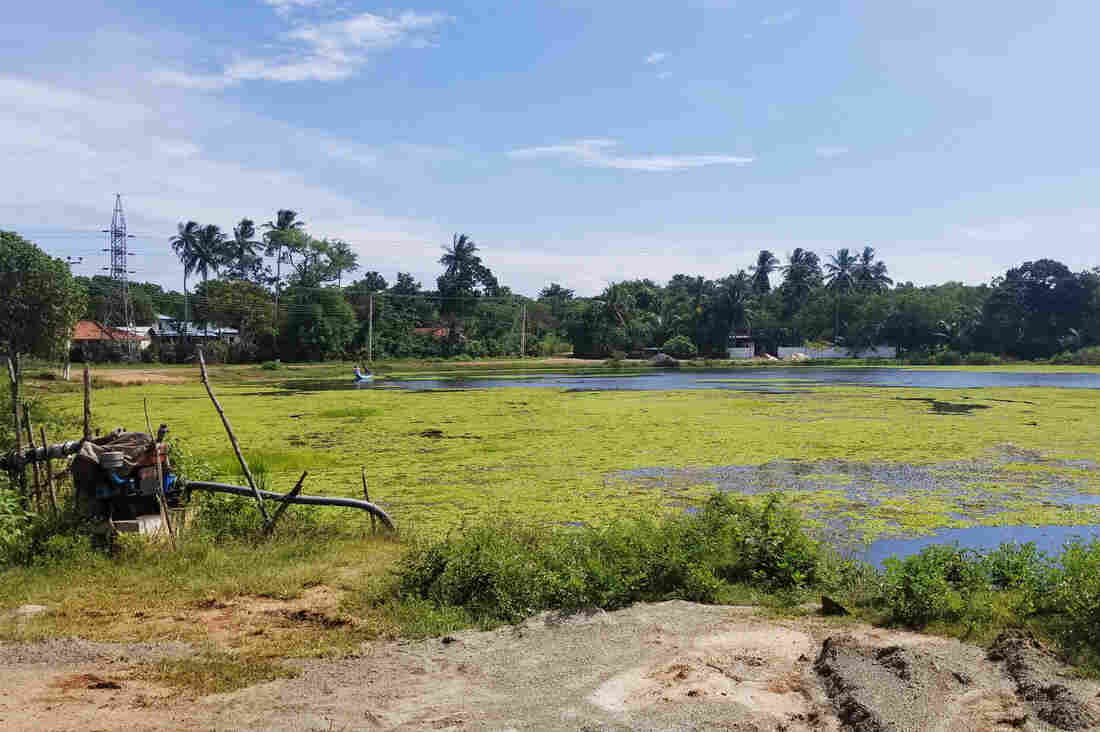 Farmers near this freshwater lake have refused to sell their land to make way for a Chinese industrial zone in Hambantota, Sri Lanka. Lauren Frayer/NPR hide caption 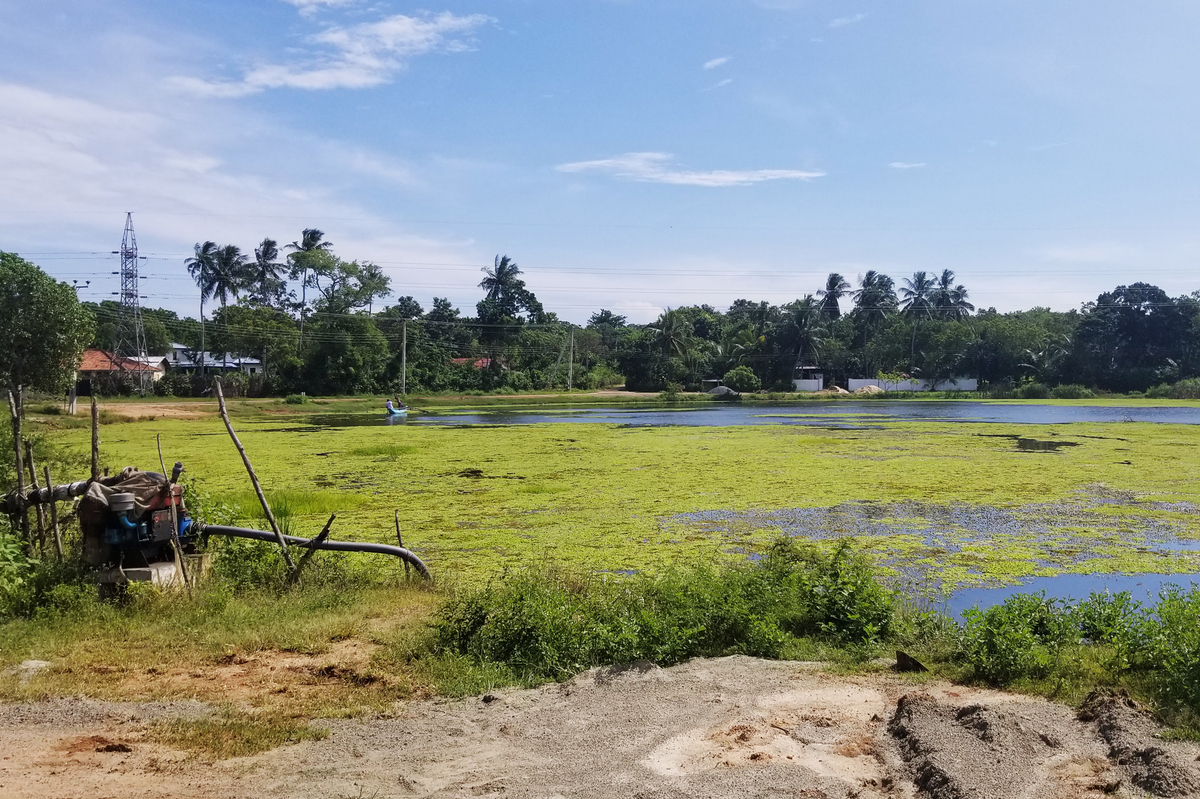 Farmers near this freshwater lake have refused to sell their land to make way for a Chinese industrial zone in Hambantota, Sri Lanka.

Ties between China and Sri Lanka have long focused on commerce, ever since the time of ancient seafaring traders. But relations really blossomed after 2005, when Mahinda Rajapaksa was elected president and welcomed Chinese lenders and builders to become part of a major infrastructure boom.

While many U.S. and Indian officials decry Hambantota as an example of Chinese "debt diplomacy," some Sri Lankan observers say their country's politicians are more to blame. Corruption allegedly facilitated deals that ultimately delivered Hambantota into Chinese hands.

"With the World Bank or the Asian Development Bank, there are lots of checks and balances. They insist on open processes for tendering, and comprehensive reviews of a project. But with China, there are few conditions. So it's a lot easier to get approval and do projects with China than with these other international institutions," says Ravi Ratnasabapathy, an accountant in Colombo who has reviewed the Hambantota deal. The Chinese "don't really ask you for proper assessments. They give you the loan and it's very easy to pad those contracts out — and make a lot of money."

Hambantota port was built in the home district of then-President Rajapaksa. He commissioned it, and the Chinese port authority allegedly paid millions in kickbacks to his reelection campaign, which he lost in 2015. Rajapaksa denies receiving Chinese kickbacks, but rival politicians in parliament are investigating.

Parliamentary investigation of the Hambantota deal is likely to be put on hold, though, if Rajapaksa's party returns to power. Elections are expected early next year. His brother, Gotabaya Rajapaksa, was elected president last month and one of his first acts in office was to appoint Mahinda as prime minister.

Ratnasabapathy believes it was wise for Sri Lanka to give up the port; otherwise, taxpayers would have been stuck with the bill. That's what he told Sri Lankan officials in private conversations leading up to the 2017 transfer, he says.

"My argument was: You went and built this horrible thing that's sitting there, and now we have to pay back the loan?" he explains. "Here, take your port and you cancel the loan!'" 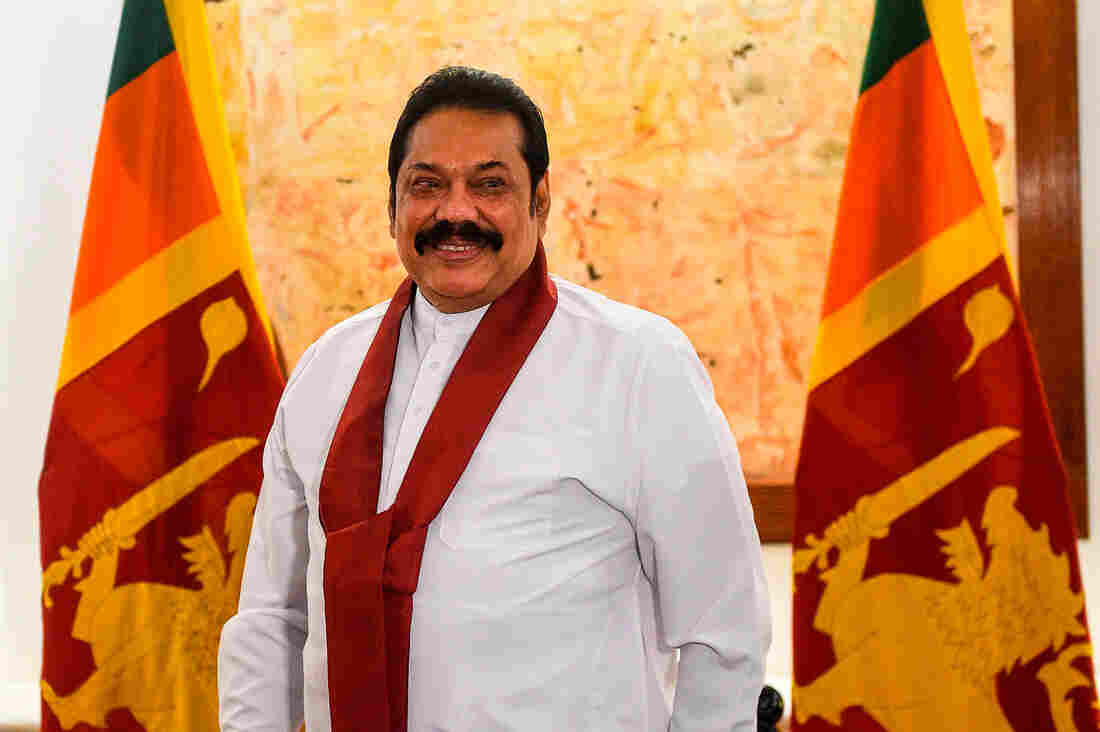 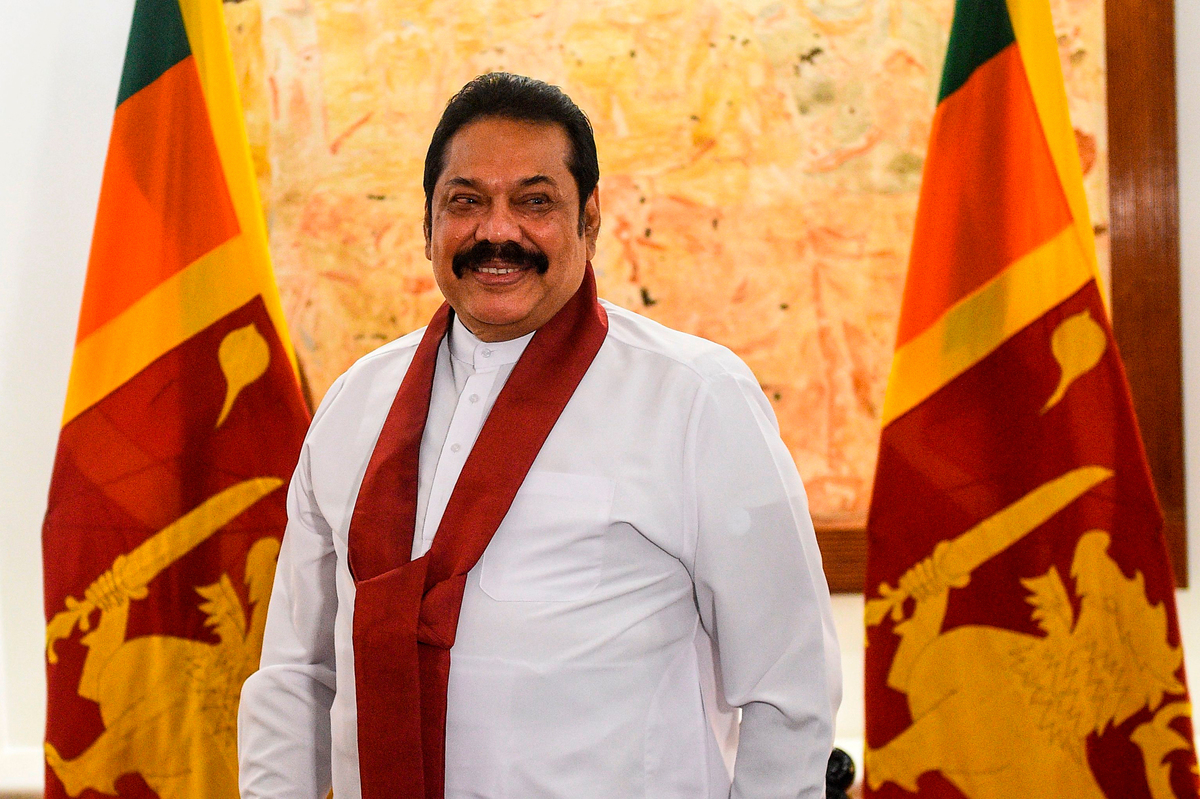 That's $1.1 billion Sri Lanka no longer has to worry about paying back, he says.

But the country remains deep in debt — to the tune of about $66 billion. China is Sri Lanka's biggest single lender, holding 12% of the country's debt, according to data from Sri Lanka's Finance Ministry. Japan holds 10%. Foreign banks together hold the most — about 42% — in the form of sovereign bonds.

Debt is only part of the story, though. In 2011, the government sold 6 acres of Colombo beachfront property to a Hong Kong-based holding company, for $125 million. The site, now home to a luxury hotel, once held strategic importance to Sri Lanka, but the government was willing to sell it, says Perera, from the National Peace Council.

"That's a very large amount of land, which was once where our military headquarters was," Perera says. "It doesn't require a so-called debt trap." The government, he says, sold that land "outright."

Commissioned in 2012 by Sri Lanka's telecommunications agency, the Lotus Tower was built by Chinese state contractors as a hub for telecom companies. A revolving restaurant and observation deck were supposed to attract tourists.

But so far, it remains closed. During its inauguration in September, Sri Lanka's outgoing president, Maithripala Sirisena, shocked a crowd of dignitaries — including Beijing's envoy to Colombo — by accusing Chinese contractors of absconding with $11 million in state funds. Parliament is also investigating that.

As for the tower itself — a giant green stalk topped with an iridescent pink bulb — guards outside told NPR it may open sometime next year. 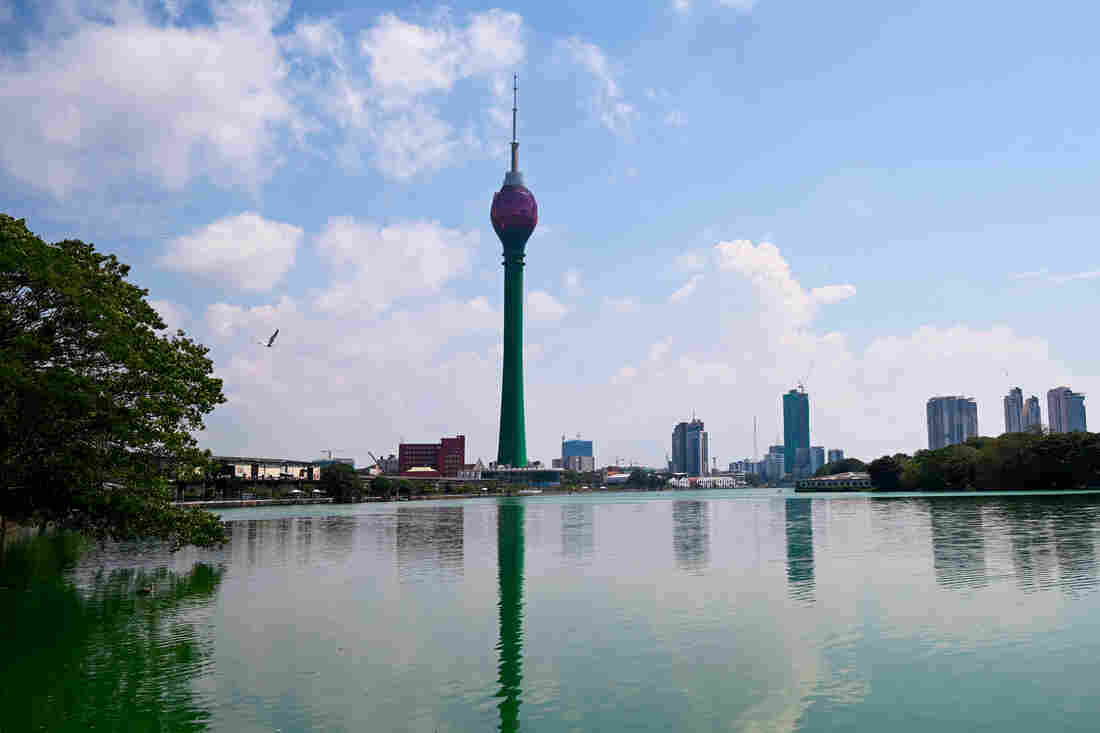 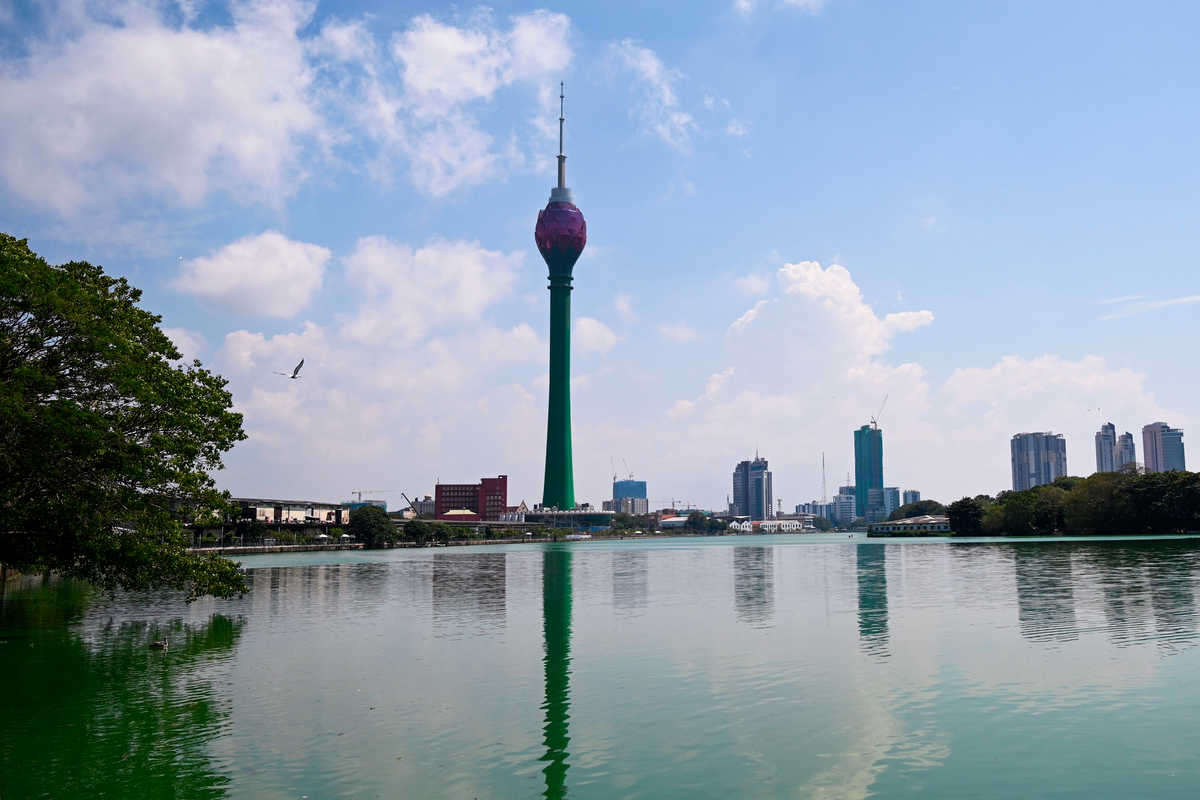 The Chinese-built Lotus Tower in Colombo is billed as South Asia's tallest tower.

The former head of Sri Lanka's chamber of commerce, Chandra Jayaratne, believes the Lotus Tower and other Chinese-financed and -built projects represent a "lost opportunity" for Sri Lanka.

"We could have used them properly," Jayaratne says, sighing. "But there was no transparency. The port city, for instance, probably is going to do more money laundering and all the wrong things, rather than the right things that add value to our society."

He watched his country's building spree with hope — anticipating that China might help Sri Lanka build a profitable new port and a world-class telecom tower. But instead, Jayaratne now worries his countrymen will be paying for those and other projects for generations to come.