Accessibility links
Did Elizabeth Warren's Embrace Of 'Medicare For All' Hurt Her Campaign? The Massachusetts senator has pushed corporate regulation and fighting corruption as campaign centerpieces since early on. So how did "Medicare for All" come to define her platform while support slid? 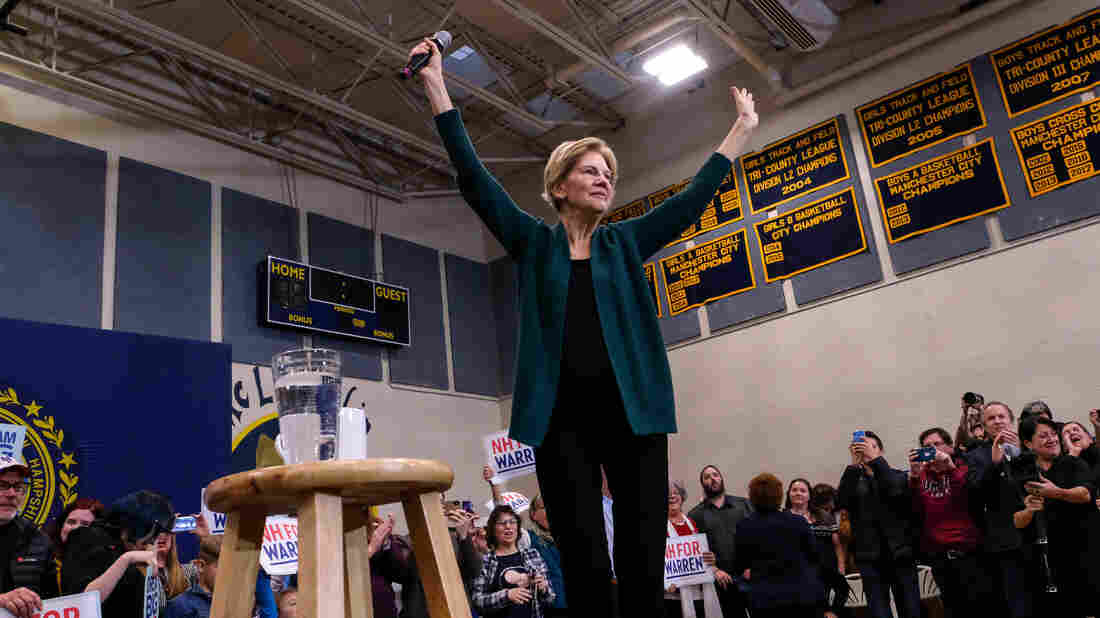 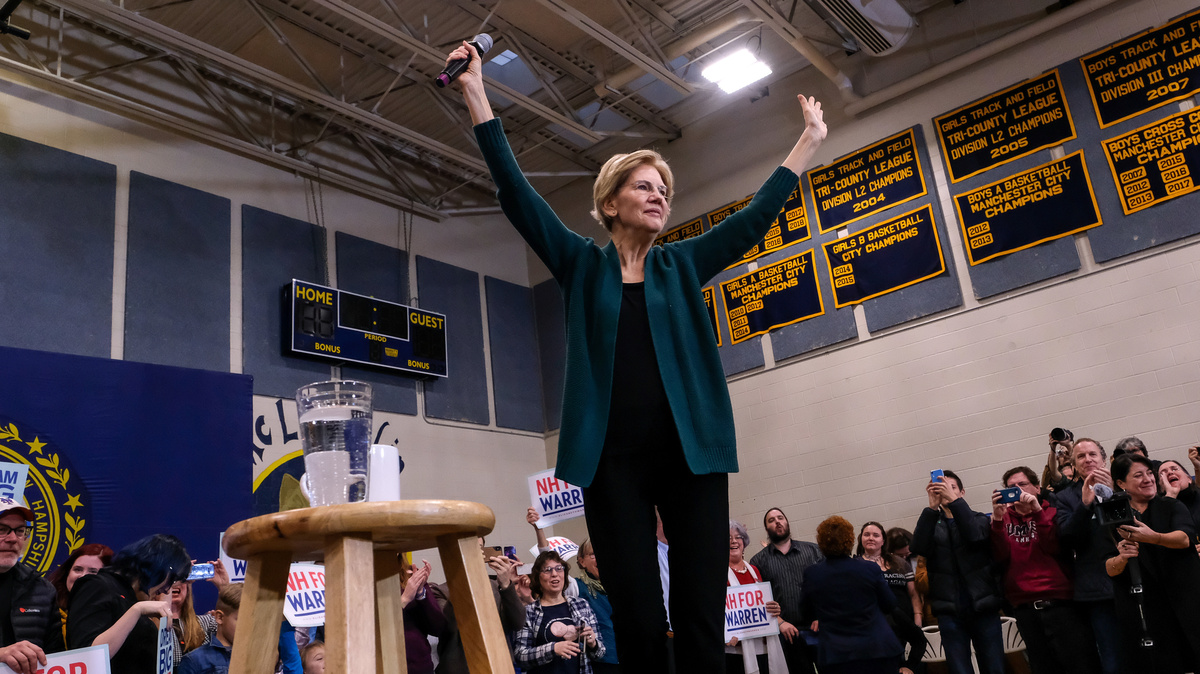 There was a time when "Medicare for All" was not a part of Sen. Elizabeth Warren's presidential campaign. It was March.

"For me, what's key is we get everybody at the table on this," was her noncommittal answer when asked about it at a CNN town hall on March 18. She was a co-sponsor of Sen. Bernie Sanders' signature single-payer health care bill (He "wrote the damn bill," as you might recall), but had backed other health overhaul bills, as she told CNN's Jake Tapper.

During this period, the Massachusetts senator also gained ground as the woman with a plan for everything. But she didn't have her own plan for health care.

Sanders' bill that Warren backed didn't lay out for certain the details of how to pay for it. Rather, he had a list of possible options.

So Warren faced a new question, pressed most consistently by South Bend, Ind., Mayor Pete Buttigieg. He chided her during October's debate: "Your signature, senator, is to have a plan for everything. Except this."

By the time Warren came up with both a way to pay for Medicare for All and a plan to transition to it, the issue was a key way that opponents were attacking her — and, potentially, a key factor in her declining support among Democratic voters. Releasing her plans didn't appear to help her regain that ground.

When asked about the link between her sagging poll numbers and Medicare for All, the Warren camp told NPR that its broad focus remains unchanged.

"Since day one, we've been talking about what's broken, our plans to fix it, and building a grassroots movement for big, structural change," said a statement from the Warren campaign. "We will continue doing that."

Adam Green, a co-founder of the Progressive Change Campaign Committee, which has endorsed Warren, believes that Buttigieg's attacks rattled voters.

"What's happened recently is that Pete Buttigieg has used insurance industry talking points to scare progressive, scared electability voters into having self-doubt and thinking that the most electable candidate might not be electable," Green said.

He also points to the fact that Medicare for All is popular among Democrats. A November Kaiser Family Foundation poll indeed found that 77% of Democrats "somewhat" or "strongly favor" Medicare for All. However, 88% support a public option, which Buttigieg and other more moderate candidates are backing. It found that a public option is also more popular among the broader electorate.

For his part, Buttigieg has responded to the charge of using industry talking points by himself pointing to the insurance industry.

"Well, the insurance companies are fighting my proposal, because they don't want the competition," he told ABC's George Stephanopoulos in November. "What is just not true is that hers is the only solution."

A health care industry coalition, the Partnership for America's Health Care Future, has run ads against a public option, though it has also run ads and fought against Medicare for All.

It's not just that attacks from opponents hurt Warren, according to Chris Jennings, who served as a health care adviser to Presidents Clinton and Obama.

"I think she created a box from which she could not escape," he said.

Jennings says that voters' perception of Warren was shaken by the fact that Warren said she wouldn't raise costs for middle-class families but then didn't have a plan immediately at the ready.

"That actually was very, very different from virtually all other elements of the Warren campaign, which I think were very clearly enunciated in terms of policy vision and financing mechanisms and not even a hesitation to respond to any critique — in fact, almost a welcome embrace of those fights," he said. "This one felt a bit more like she was on the defensive."

But on the campaign trail, Warren's message is close to what it has been from the beginning. At a recent New Hampshire town hall, she focused on corruption, and health care barely featured in her stump speech.

However, she does get asked about it. One voter who had questions at a recent town hall in Peterborough, N.H., was Jonathan Queen.

"I'm not sure that I'm on board with Medicare for All," he told NPR.

Queen is from Mauldin, S.C., but he happened to be near Warren's New Hampshire town hall for medical appointments in Boston. He was diagnosed eight years ago with stage 4 esophageal cancer.

"I'm alive because of a drug-sponsored clinical trial," he said. "That is also extremely important. We need to find a balance between reasonable drug prices and maintaining profit motive to spur innovation and bring those types of things forward."

Queen got to ask Warren about this; she said she wants to boost funding for government medical research and improve the FDA approval process to keep innovation strong.

Even given Queen's doubts about Medicare for All, he said that Warren is his first choice.

Which Health Care Strategy Has The Edge Among Democrats And Swing Voters?

Voters like Nancy Lindberg are less sure. Standing in line for a photo with the candidate, she said that she's considering both Warren and Buttigieg. Lindberg added that health care is her top issue.

"I support universal health care," she said. "I'm still bending toward the side of, we already have the ACA. Can that be improved upon? Do we have to throw that out to start all over again?"

And that's the kind of voter Warren is targeting. Nearly two-thirds of Democrats say that they haven't chosen a candidate yet, according to a recent Quinnipiac poll, or that their minds might still change.