Accessibility links
Boris Johnson And Conservative Party Win Large Majority In U.K. Parliament The Tories now have the biggest majority since Margaret Thatcher's win in 1987, all but ensuring the United Kingdom will exit the European Union in January. 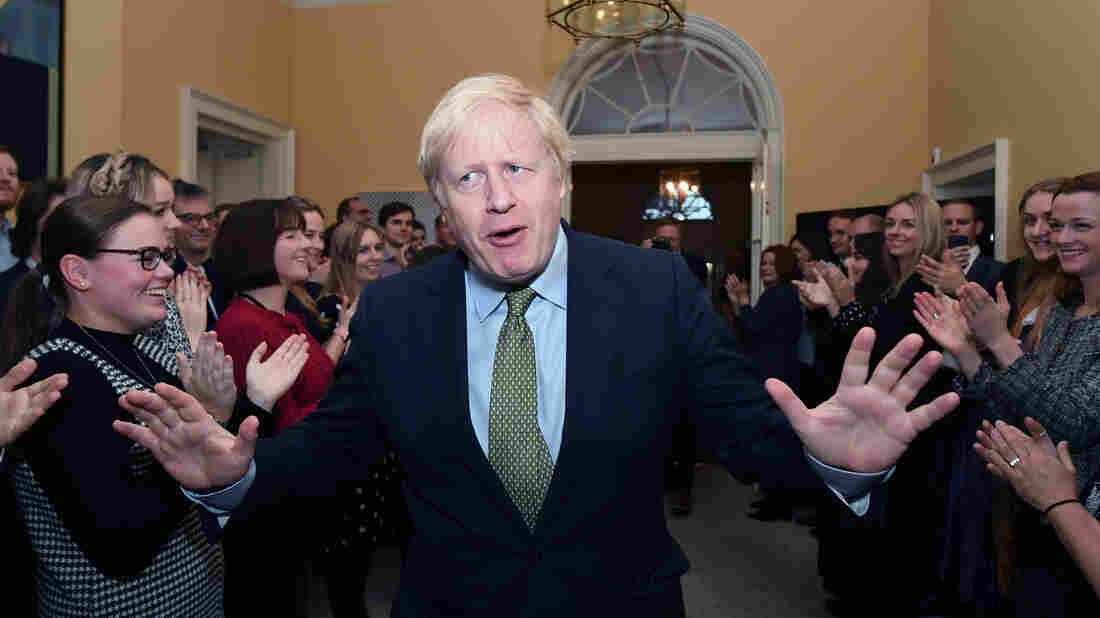 Prime Minister Boris Johnson and his staff returns to 10 Downing Street after visiting Buckingham Palace, where he was given permission to form the next government during an audience with Queen Elizabeth II. Stefan Rousseau /WPA Pool/Getty Images hide caption 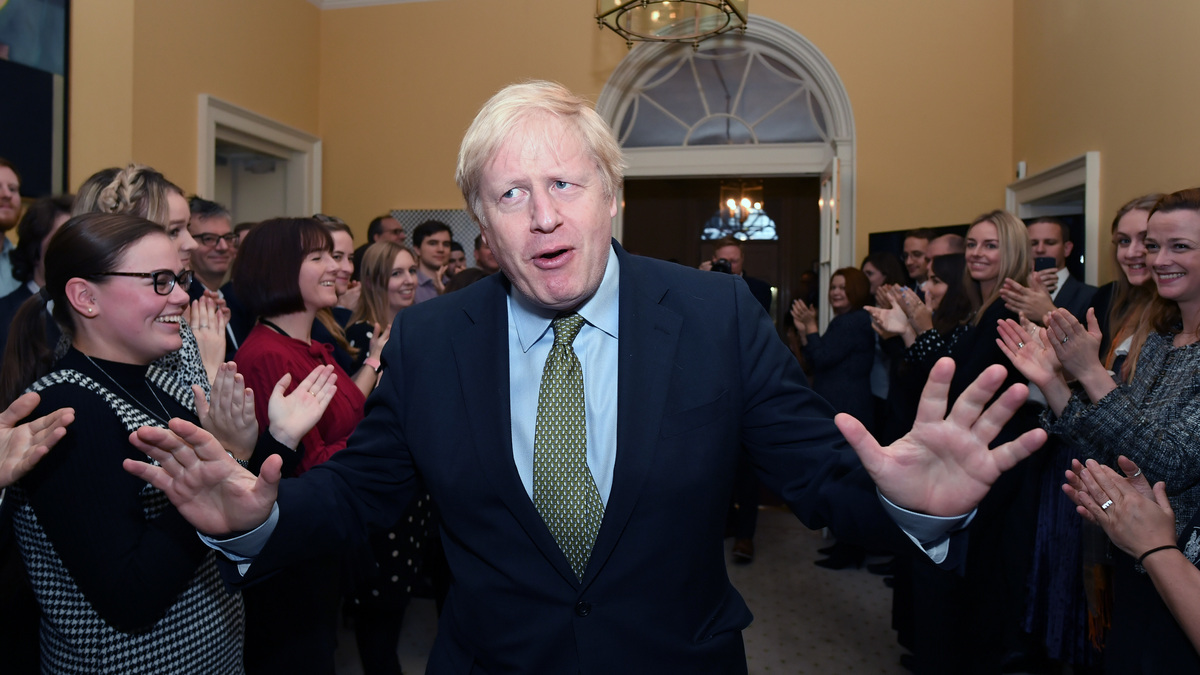 Prime Minister Boris Johnson and his staff returns to 10 Downing Street after visiting Buckingham Palace, where he was given permission to form the next government during an audience with Queen Elizabeth II.

British voters delivered a stunning victory to Prime Minister Boris Johnson and his Conservative Party in Thursday's general election, giving the Brexit backer a large majority in the House of Commons and the support he needs to take the United Kingdom out of the European Union in January.

"The Conservatives picked up 47 seats," NPR's Frank Langfitt reports from London. "This is the biggest majority since Margaret Thatcher's win in 1987."

The Conservatives now have an 80-seat majority after snaring 365 seats in the 650-seat chamber, giving Johnson a firm mandate. The opposition Labour Party suffered its worst defeat in more than 80 years, losing 59 seats.

Johnson has been prime minister since July following the resignation of Theresa May. In September, he called for early elections after losing a Brexit vote in Parliament — a gamble that Johnson has now won handily.

Prime Minister @BorisJohnson returns to 10 Downing Street and is welcomed by staff following an audience with Her Majesty the Queen. pic.twitter.com/oSycEGDqtP

The lopsided results sent Johnson to Buckingham Palace on Friday for a formal audience in which Queen Elizabeth II invited him to form a new government.

Britain's exit from the EU has been stalled for months, as Johnson, like May before him, has been unable to marshal support in Parliament for exit terms brokered with European officials.

"I will put an end to all that nonsense," Johnson said on Friday, "and we will get Brexit done on time, by the 31st of January."

Labour Party leader Jeremy Corbyn, although he won re-election in his constituency, announced he will not lead Labour in the next election.

"It was a very disappointing night," Corbyn said on Twitter. After campaigning on pledges to remake Britain in a socialist vision of nationalized industries, he called for "a process of reflection on this result and on the policies that the party will take going forward."

St Ives votes, the final #GeneralElectionResults, are on their way to be counted after boats were finally able to travel following a storm.

Andrew Walder helped ferry the ballot boxes and told @PA this is “generally why elections are held in the summer!”https://t.co/dDW49bGmhm

As Johnson celebrated his victory, the announcement of final numbers was held up only by the difficulty of retrieving ballot boxes from far-flung polling places such as the Isles of Scilly off the southwestern coast, where boats had been unable to traverse stormy seas late Thursday. Those results finally came in Friday afternoon, local time.

Since the 2016 national referendum in which a narrow majority voted to take Britain out of the European Union, Parliament has repeatedly rejected proposed exit agreements negotiated with the EU. The political dysfunction led Johnson to call early elections in hopes it would give him the majority he needed to pass a plan for Brexit.

It now appears likely Parliament will vote Brexit into law and the U.K. will meet the EU's most recent deadline to formally leave by Jan. 31.

The results closely tracked voting patterns in the Brexit referendum of three years ago.

Scotland, which had voted to remain in the EU, delivered a nearly clean sweep to the anti-Brexit Scottish National Party. After her party won 12 additional seats and saw one of its best election showings ever, SNP leader and First Minister of Scotland Nicola Sturgeon suggested there should be a second referendum on Scottish independence.

"Just as I reluctantly accept ... that Boris Johnson has a mandate now to take England out of the EU," Sturgeon told the BBC, "he must accept that I have a mandate to offer Scotland the choice of an alternative future."

President Trump — who criticized Corbyn and praised Johnson in the weeks before the election — celebrated the Tories' victory, saying via Twitter, "Congratulations to Boris Johnson on his great WIN! Britain and the United States will now be free to strike a massive new Trade Deal after BREXIT."

Northern Ireland, which also voted to remain in the EU, for the first time elected a majority of Irish nationalists to the House of Commons. Its open border with Ireland is perhaps the major stumbling block for implementing Brexit.

Two party leaders lost their seats. Jo Swinson of the Liberal Democrats, who had suggested she could serve as a compromise prime minister in a coalition government, was tossed out by a candidate from the Scottish National Party. And Nigel Dodds of the Democratic Unionist Party, which had propped up the minority Conservatives in the previous Parliament, lost his seat to a candidate from the Irish nationalist Sinn Fein.

Markets reacted to the news Friday morning with apparent relief that the 3 1/2 years of political uncertainty over Brexit may finally be coming to an end. The British pound sterling rose nearly 2%, and European exchanges were modestly up.