Accessibility links
How Boise's Fight Over Homelessness Is Rippling Along The West Coast Cities in the West that are dealing with an explosion of homelessness are urging the U.S. Supreme Court to overturn a lower court ruling that limits bans on camping in public parks and rights of way. 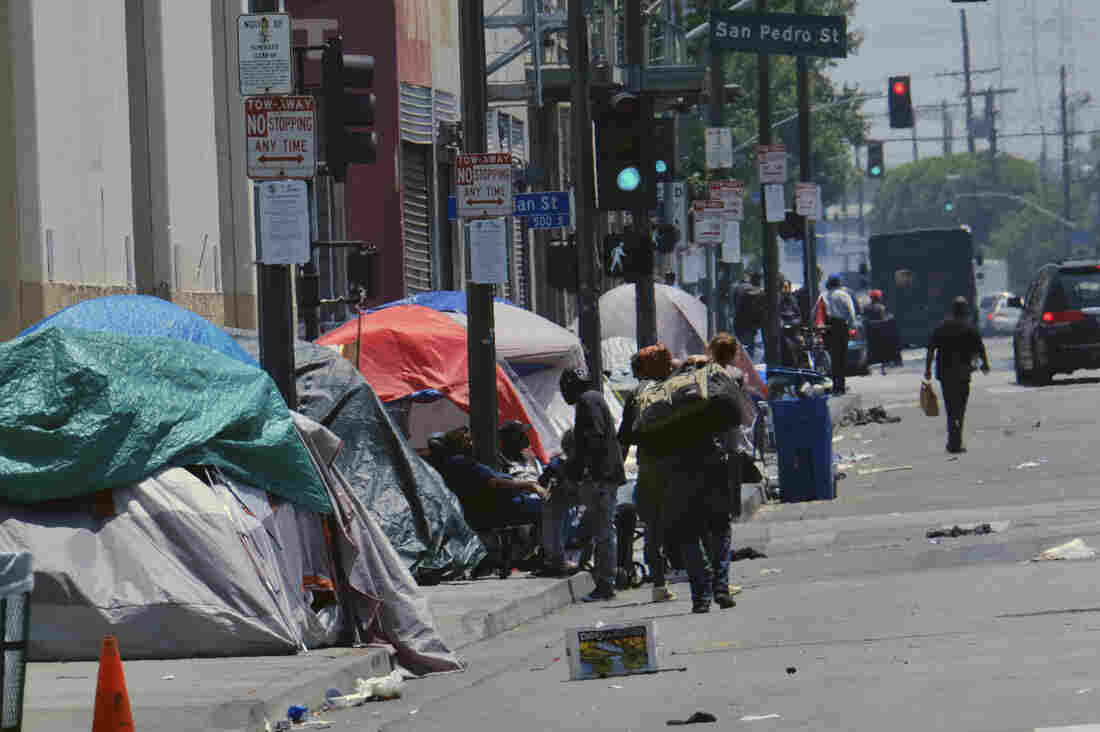 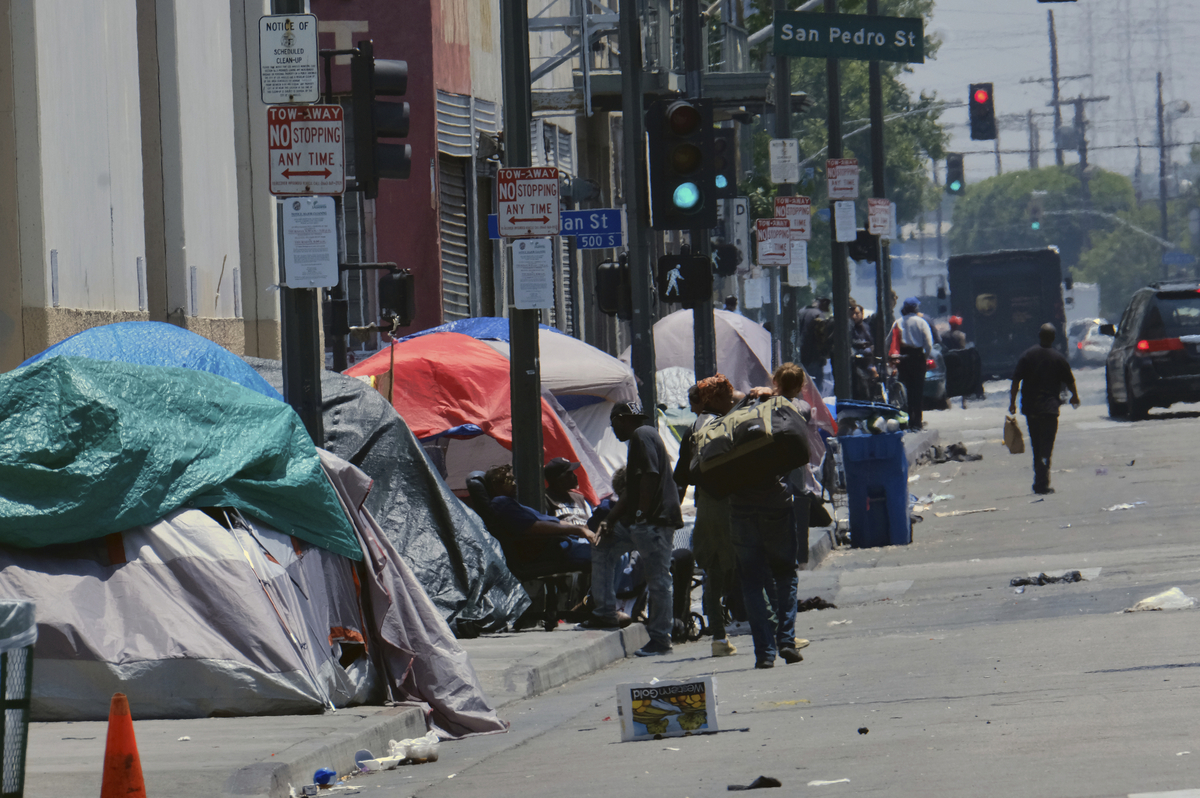 It's billed as one of the most livable places in the country with its good schools, leafy streets and safe neighborhoods. That's what makes Boise, Idaho, an odd backdrop for a heated legal fight around homelessness that is reverberating across the western United States and may soon be taken up by the Supreme Court.

It goes back nearly a decade to when seven homeless people sued Boise for repeatedly ticketing them for sleeping outside. Last year, the 9th Circuit Court of Appeals ruled in their favor. The decision said it was "cruel and unusual punishment" to enforce rules that stop homeless people from camping in public places when they have no place else to go. That means in states across the 9th Circuit — including Washington, Oregon and California — cities and counties can no longer enforce similar statutes if they don't have enough shelter beds for homeless people sleeping outside.

Pam Hawkes was one of the original plaintiffs in the case. She now lives in Spokane, Wash., where she had been in and out of homelessness and only recently found stable housing. Seven years ago, she and her then-partner had nowhere to live in Boise, and many nights, they had no other choice but to pitch a tent in a wooded area along the river.

"I was like, 'I just need somewhere to lay my head overnight,' and it's not like we left camp up," she said. "We always packed up and we always kept it clean."

Even though she says she tried to keep herself hidden, police issued her more than a dozen tickets. Like most people living on the streets, Hawkes didn't have steady work and couldn't pay the fines. So she ended up in jail.

"I'd never been in jail a whole day and night before," she said. "It was terrifying."

Boise has hired a high-powered Los Angeles-based law firm to appeal the case to the Supreme Court. Dozens of other municipalities and organizations ranging from the downtown LA YMCA to a group of California counties have filed amicus briefs in support of the review.

Meanwhile, the fight over how to deal with the ever-growing homelessness crisis — most acutely visible in places such as Los Angeles, San Francisco and Seattle — is dividing cities, neighborhoods and political parties.

It was a deciding factor in the unusually heated Boise mayoral race between two Democrats this past fall. Like many western cities, Boise is in the midst of an extraordinary affordable housing shortage. It's also one of the fastest-growing cities in the nation, a source of tension in some corners.

The message that prevailed was city council president Lauren McLean's.

"The part that is missed all too often is the importance of prevention, if we want to prevent camps, we have to prevent homelessness," she said during a forum at at a local homeless shelter. "We've got to address the affordability crisis in the community."

In a divisive runoff earlier this month, McLean handily beat the city's longest-serving mayor, Dave Bieter. He took heat for the city's spending of hundreds of thousands of dollars to appeal a case, money that some argued should be going to housing and more support services for the homeless.

But Bieter warned that the famously pleasant and livable city of Boise can only remain that way if it has the ability to issue some tickets to stop the spread of tent cities.

"I'm really concerned when I see Seattle or Portland or San Francisco, I go there and I see a city that's overwhelmed by the problem," he said. 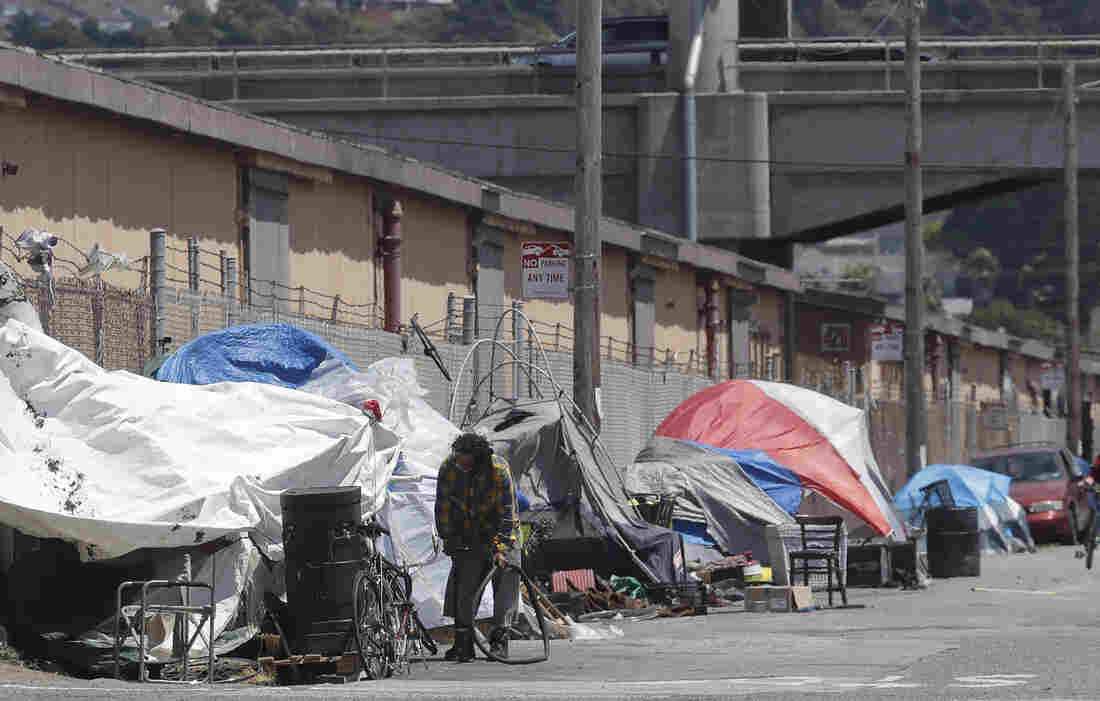 In cities like those, and in Los Angeles, the homelessness crisis is far more eye-opening than in Boise. Homeless encampments are sprouting up in underpasses, along streets, on scores of sidewalks and inside parks.

In downtown Los Angeles' Skid Row, some 3,000 people sleep on the streets in the shadow of the financial district and luxury condos. The county is home to nearly 60,000 homeless people, and the city's homeless population jumped 16% in the last year. California is where nearly a quarter of the country's homeless population live.

"I want the Supreme Court to issue clear rules that lead there to be certainty in jurisdictions like ours as to how we can regulate — constitutionally — conduct on our sidewalks," Feuer said. "A shared space for which we need to strike a very fine balance between the rights and legitimate interests of homeless people and the rights and legitimate interests of other residents and businesses."

The Boise ruling, he said, sweeps too broadly. He wants clarity. Does Los Angeles have the right to intervene if someone, for example, refuses to take an available shelter bed even if the city doesn't have beds for everyone? Is the city required to do burdensome nightly counts of the homeless population as compared with the number of shelter beds available?

"We need to assure that there are rules that everybody can live by, so that all our public spaces that are shared by everybody can be safe for everybody," he said. "Occasionally that is going to require some level of enforcement, and sometimes a level of enforcement is going to pertain to people who are homeless, not because of their status of being homeless, but because of conduct."

There are nowhere near the number of shelter beds or temporary and permanent housing for the people who need it, Feuer said. But as the city works to solve the crisis, it also needs tools to keep Los Angeles safe. Business owners, housed residents, homeless people and advocates are frustrated with the growing encampments, garbage, human feces and used needles. This is all increasing as the city spends more on tackling the homelessness crisis.

In 2016, voters passed Proposition HHH, a $1.2 billion affordable housing bond program to build 10,000 supportive housing units for the chronically homeless in Los Angeles. Not one unit is complete. 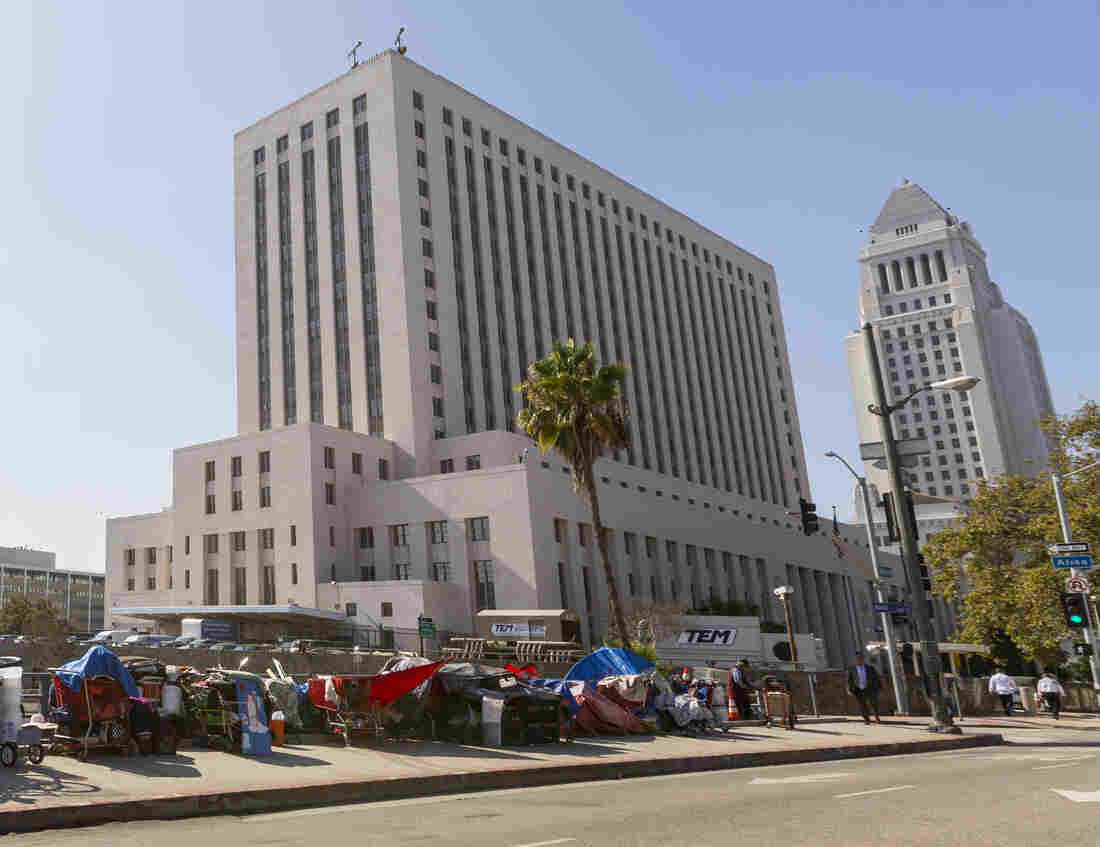 In Los Angeles, homeless encampments sprout up in underpasses, along streets, on scores of sidewalks and inside parks. Damian Dovarganes/AP hide caption 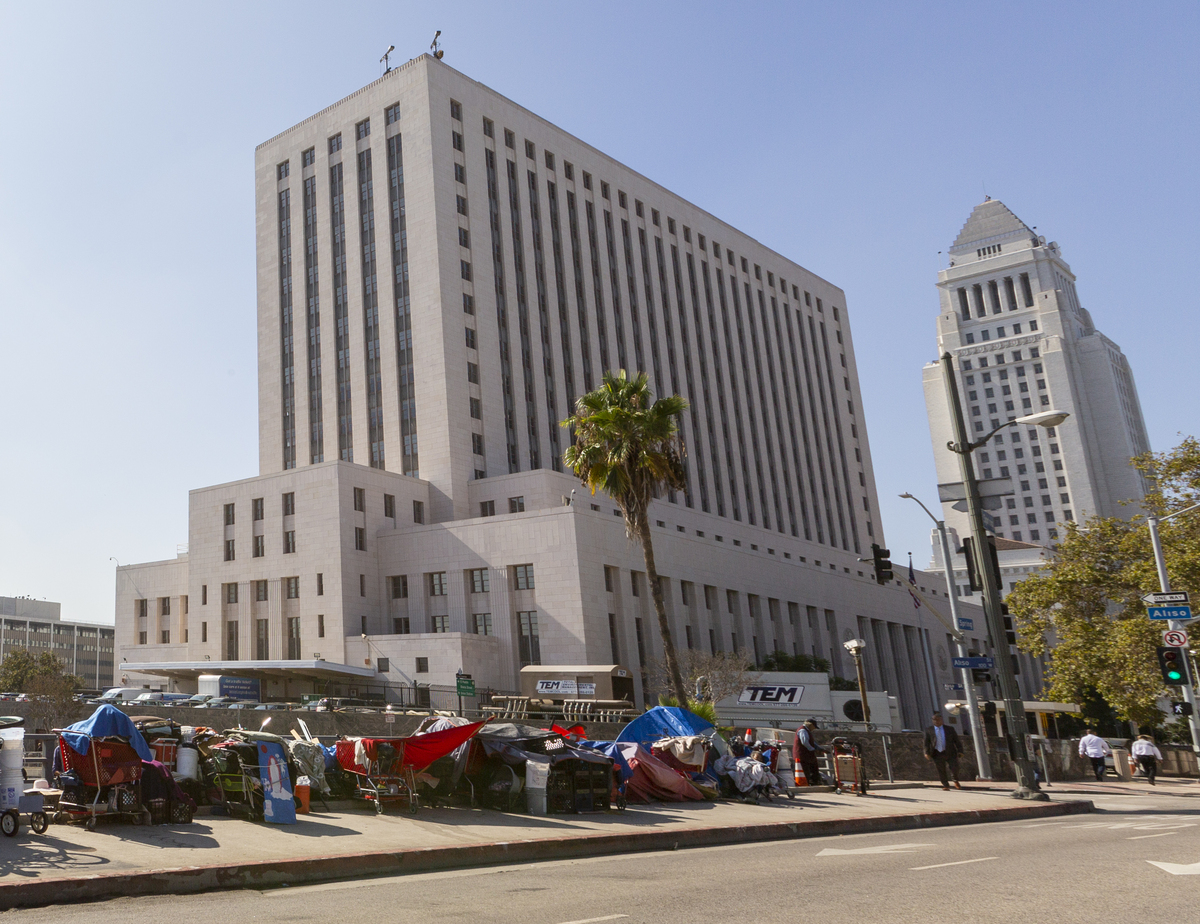 In Los Angeles, homeless encampments sprout up in underpasses, along streets, on scores of sidewalks and inside parks.

Opinion: Should It Be Illegal To Sleep Outside?

Outside the LA CAN office, Juan Brown is shaking his head as he watches sanitation workers fill garbage trucks and power-wash the sidewalks. Police are taping off the area as outreach workers roam the streets.

"It's just another ploy to harass the homeless, making us move," he said.

He was living on the corner where he stands for three years before finally getting into housing a month ago. He lost his job as a truck driver after he was hit by a drunk driver. He couldn't make rent and ended up outside. He refers to the clean streets effort he's watching as clean sweeps, because homeless people are forced to move, temporarily. If they don't get their stuff out of the way in time, he said, it gets confiscated.