Accessibility links
Review: 'Nietzsche And The Burbs,' By Lars Iyer It's easy to make fun of disgruntled teenagers, but in his funny new Nietzsche and the Burbs, author Lars Iyer depicts them accurately and with real sensitivity, never mocking or condescending. 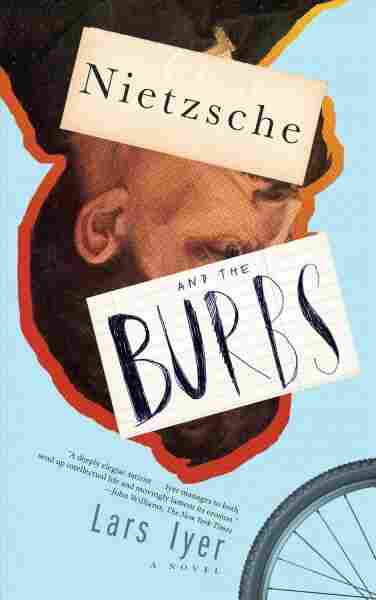 Nietzsche and the Burbs

It's about time that disaffected teenagers get the credit they've long deserved and never wanted. Sure, they can be kind of frustrating, with their hair-trigger eye-rolling reflex and grunted monosyllabic responses to any possible question, but they're also likely single-handedly keeping the French-poetry-collection and black-coffee industries alive. (And if there's a thriving black market for now-banned clove cigarettes — a staple of depressed and pretentious teens back when I was one of them — they're probably responsible for that, too.)

They are, by nature, solitary people, but they also have a way of finding one another. That's the case with the coterie of teens in Lars Iyer's delightful Nietzsche and the Burbs, a novel about young friends who pass the time in their sleepy town by drinking, playing music and wishing they were anywhere else. It's a hilarious book that also manages to be a genuinely moving look at the end of adolescence.

Chandra, Paula, Art and Merv are four young adults in their last year of secondary school in Wokingham, a suburban town west of London. It's a pleasant enough place to live, which drives the teens crazy: "The worst thing about Wokingham is that it smiles back at your despair. Wokingham hopes you'll have a nice day in your despair." They don't fit into any of their school's cliques — not the popular "beasts" or the spoiled "trendies," so they've formed their own group. "All we have in common is that we have nothing in common with anyone else," Chandra explains.

When they're not in school, they spend their time at band practice (they play something Art calls "tantric metal"), drinking, philosophizing and regaling one another with made-up songs ("Supertwink" for Merv and "Fly Lesbian Seagull" for Paula). Mostly, though, they complain about life in the suburbs and the people who call it home: "They have no lightness. No life. No laughter or irony. They're heavy as suet."

The four friends are intrigued when a new student shows up to school, one who's not unlike them — he's quiet, composed and has "NIHILISM" written across his notebook. They try to befriend him, infatuated with his uncurdled intellect: "His intelligence is not crabbed, like ours. It's not turned in on itself. It hasn't been squandered on music trivia. On the ranking of favourite albums and films. His intelligence hasn't been frittered away in insults. In banter. In ways of surviving the boredom."

They recruit the boy, whom they've nicknamed Nietzsche, to sing in their band, and are pleased with his performance: "Is Nietzsche a channel? Is Nietzsche an antenna? Is he casting a spell? Are these the words of some conjuration? Is this a suburban hex?" Meanwhile, they count down the days to the end of school, wallow in existential despair and giddily experiment with drugs.

Nietzsche and the Burbs isn't a plot-heavy novel; it's more of a character study told through a series of darkly funny conversations among the four friends (and, to a lesser extent, Nietzsche, who doesn't talk much). That's not to say it's boring at all — Iyer's dialogue is so funny, and rings so true, that it's something of a challenge not to read the whole thing in a single sitting. In one scene, Paula explains to her friends that books make her miserable. "But you read a lot," Art responds. "I like being miserable," Paula says.

Disgruntled teenagers are famously hard to know, but Iyer depicts them accurately and with a real sensitivity, never mocking or condescending to them.

Disgruntled teenagers are famously hard to know, but Iyer depicts them accurately and with a real sensitivity, never mocking or condescending to them. He captures their adolescent bravado beautifully: "We infuriate them because they fear us. Because we think and they hate thought. Because we feel things, and they have declared war on passion, on daring, on life. ... Because we're half mad with nihilism, and the lack of meaning in their lives hasn't driven them insane."

The scene is Iyer at his best: observant, funny and compassionate. It's obvious that he loves his characters, and his enthusiasm for them is contagious — it's impossible not to root for these hard-edged but sweet kids, even as they practically beg you to disdain them. Nietzsche and the Burbs is an anthem for young misfits and a hilarious, triumphant book about friendship, which Chandra beautifully describes thus: "It's being with people. It's a mind-meld. It's holding onto something. It's bearing something in common, when the word just wants you to scatter. It's keeping something safe."