Accessibility links
'The Banjo Project': A Museum You Can Tour Without Leaving Your Couch For more than 15 years, filmmaker Marc Fields has been on a quest to capture and share the story of the banjo. The Banjo Project is an online museum that covers the instrument's history and culture.

For more than 15 years, filmmaker Marc Fields has been on a quest to capture and share the story of the banjo. The Banjo Project is an online museum that covers the instrument's history and culture.

Read This Story On WBUR:

The Banjo's Beauty, And Its Cultural Baggage, Is On Display In A New Digital Museum
Visit 'The Banjo Project' 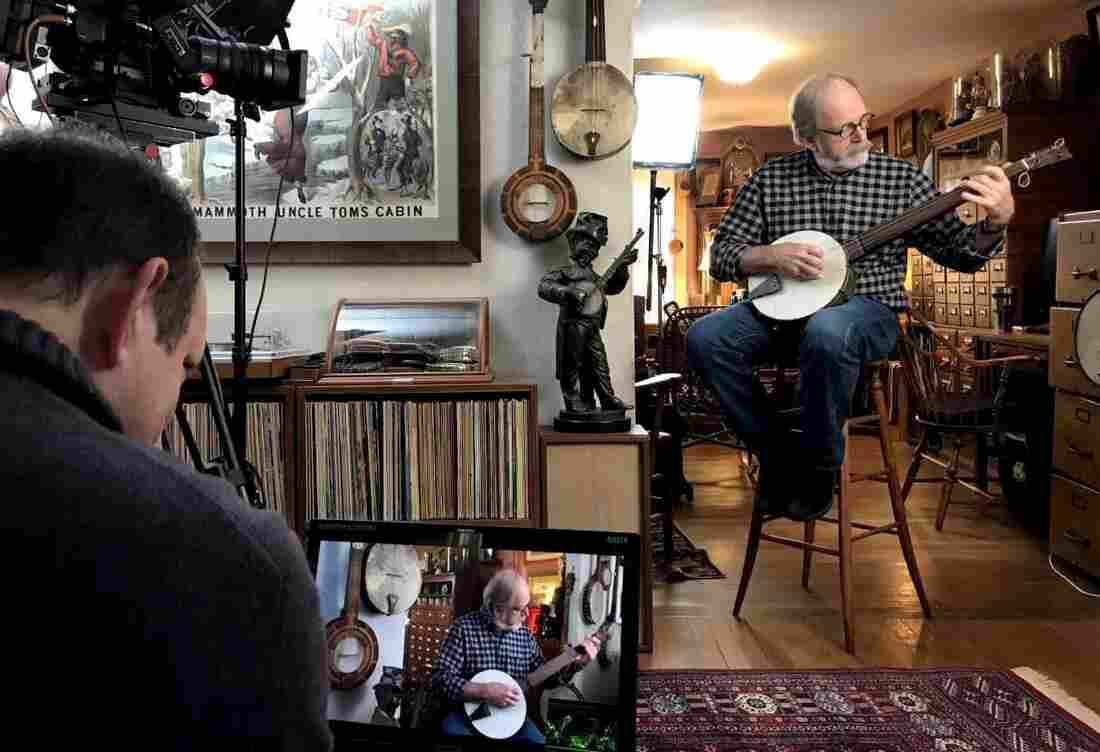 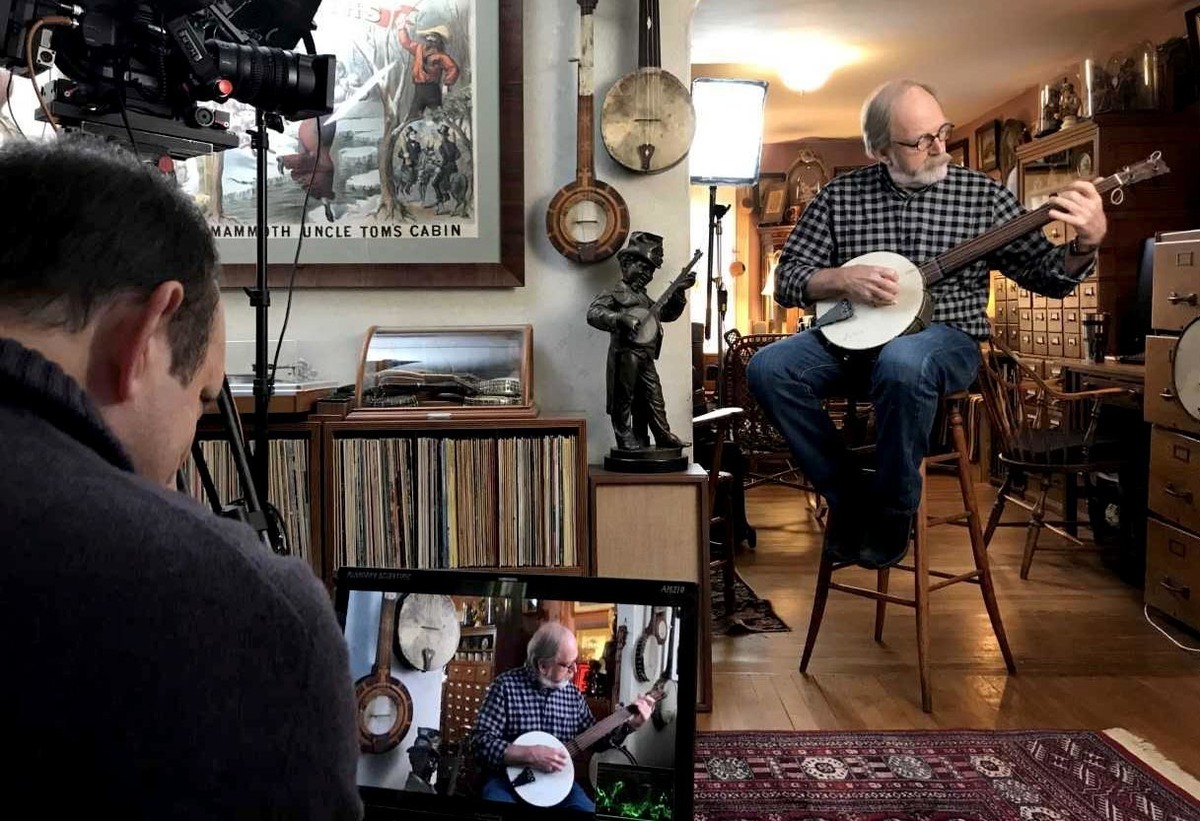 For more than 15 years, Boston area filmmaker Marc Fields has been on a quest to capture and share the story of the banjo. He's assembled more than 300 hours of original video and piles of research that's the fuel for his new banjo museum. And you don't need to leave the couch to visit, as Andrea Shea of member station WBUR reports.

MARC FIELDS: It's a place that I came to when I first started this project and realized how much there is about the banjo which people don't know about and which people should know about.

SHEA: That's Fields. He says Bollman's trove of 200-plus instruments and banjo-related stuff is a portal into America's social history. And Bollman is happy to share it with a lot more people.

JIM BOLLMAN: Being an old fuddy-duddy and being electronically challenged, all my information is on three-by-five cards in the collection. And yet he can bring that to the digital age.

FIELDS: We're rolling. So what would you like to play?

BOLLMAN: I'm going to play a tune called "Vance's Song," which was written about Devil Vance, who was part of the Hatfield-McCoy legend of West Virginia. OK. Well, here it goes.

SHEA: Back in his office at nearby Emerson College, Fields leads a tour of his digital museum in the making called The Banjo Project. It includes interactive timelines, archival footage of famous players and dynamic displays of the instruments themselves. Fields zooms in on one photographed in 360 degrees.

FIELDS: You can look at the detail all the way down to the grain of the wood, the brackets, the hardware.

SHEA: Then, with the click of his mouse, Fields does what would be alarm-tripping in most museums. He flips the banjo over so we can see the maker's signature on its back.

The Banjo Project traces the instrument's history from its African origins to the present day through interviews with historians, makers and such contemporary performers as Rhiannon Giddens, co-founder of the Carolina Chocolate Drops.

RHIANNON GIDDENS: There's so much history in this music that is not in public view - the good stuff and the bad stuff.

SHEA: Some of that bad stuff is the banjo's role in the minstrel era from the mid-1800s through the early 20th century.

STEPHEN FOSTER: (Singing) I come from Alabama with a banjo on my knee. I'm going to Louisiana, my true love for to see.

FIELDS: Let's face it; the whole American entertainment industry was founded on the minstrel show. For better or for worse, that's a good starting place for understanding a lot of things that have happened since then.

SHEA: Fields says white minstrel entertainers co-opted the banjo, donned blackface and created caricatures of slaves and their music that endured for decades. On the site, ethnomusicologist Gregory Adams elaborates.

SHEA: But the instrument was also a tool for liberation, as scholar Rex Ellis of the National Museum of African American History and Culture points out. In The Banjo Project, he reflects on the life of Gus Cannon, who was born on a Mississippi plantation and went on to write a song in the 1920s that would become a pop hit nearly half a century later.

REX ELLIS: So now the banjo not only becomes something that he can express himself culturally with, it also can become something that gives him upward mobility.

(SOUNDBITE OF SONG, "WALK RIGHT IN")

GUS CANNON: (Singing) Walk right in, sit right down. And baby, let your mind roll on. Hey, walk right in. Stay a little while. But, Daddy, you can't stay too long.

SHEA: The banjo was also a ticket to a more independent life for child performer Lotta Crabtree, says The Banjo Project's Marc Fields.

FIELDS: She was known for never having married, wearing trousers on stage, smoking cigarettes and playing the banjo.

SHEA: And she became a 19th century superstar, much to the surprise of project manager Shaun Clarke. He's been working with Fields for more than a decade.

SHAUN CLARKE: The first time that I saw a woman who was playing the banjo, the first I saw a black banjo player, that was a challenge to the stereotypes that I had associated with the instrument.

SHEA: Of course, The Banjo Project includes such bluegrass stars as Earl Scruggs and Ralph Stanley, who Marc Fields was able to interview before they died. But Fields wants to make sure visitors to the site understand the instrument is very much alive and still evolving.

FIELDS: The banjo is still being used to create amazing original music today. And it's not being done in ignorance of this past.

SHEA: The past and the present are online now in a Banjo Project prototype. Marc Fields and his team hope to launch a fuller digital museum in the New Year.