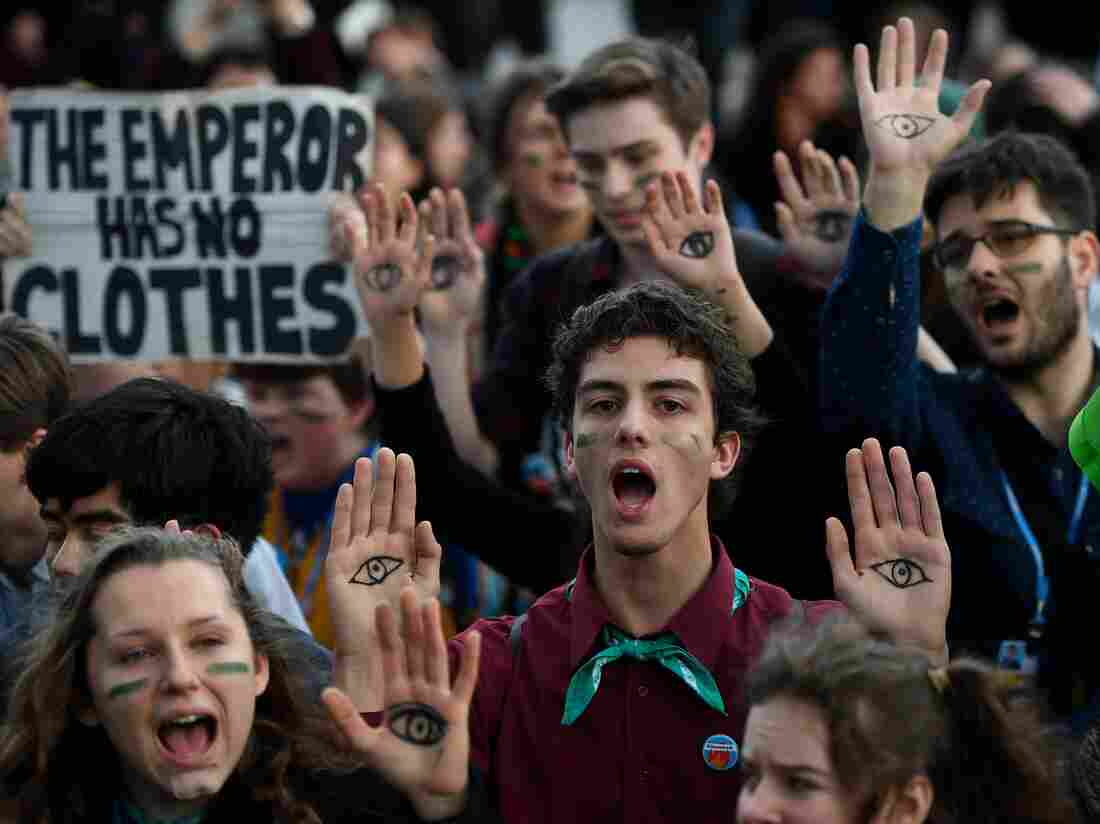 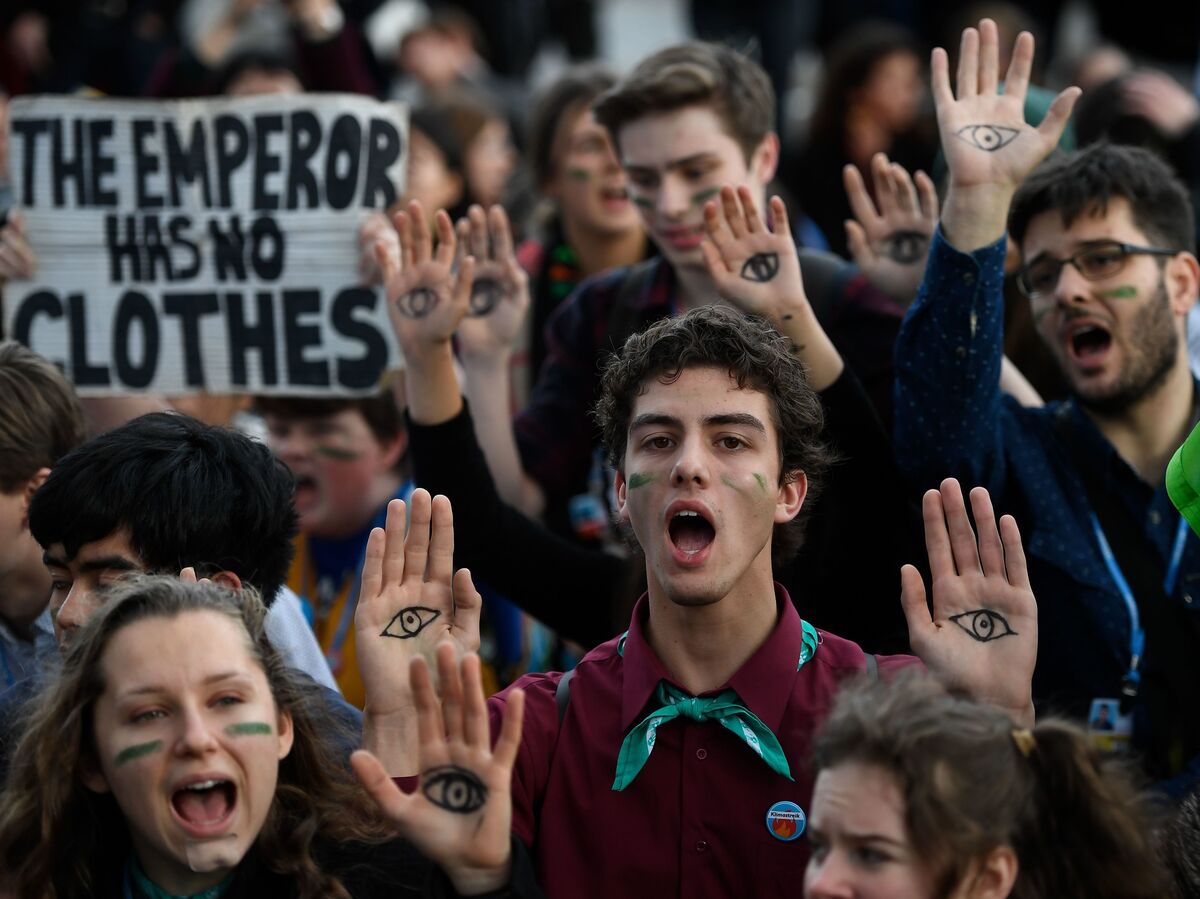 Demonstrators take part in a protest on climate emergency outside the U.N. Climate Change Conference COP25 in Madrid on Friday.

The global climate talks in Madrid ended on Sunday – two days after its scheduled closing, and with little to show for the marathon session.

The Madrid-based summit, known as COP25, or generically as the U.N. Climate Change Summit, was intended as a time to hammer out the rules and commitments that would get the world's nations on track to meet the targets of the 2015 Paris climate accord. Instead, the talks showed deep divisions, as small countries highly vulnerable to rising seas and powerful storms were at odds with wealthy, high-emitting countries like the United States.

The end result of the longest meeting in 25 years of climate talks was a declaration stating an "urgent need" to cut greenhouse gases to meet the Paris climate goals, and a promise to help poor countries facing catastrophe, the Associated Press reports.

U.N. Secretary-General António Guterres expressed disappointment with the outcome of the talks.

"The international community lost an important opportunity to show increased ambition on mitigation, adaptation & finance to tackle the climate crisis. But we must not give up, and I will not give up," he tweeted. "I am more determined than ever to work for 2020 to be the year in which all countries commit to do what science tells us is necessary to reach carbon neutrality in 2050 and a no more than 1.5 degree temperature rise."

But we are quickly losing the chance to hit the 1.5-degree target, according to a recent U.N. report. The world is currently on course for a temperature rise of 3 to 4 degrees Celsius by the end of the century, with potentially disastrous consequences. 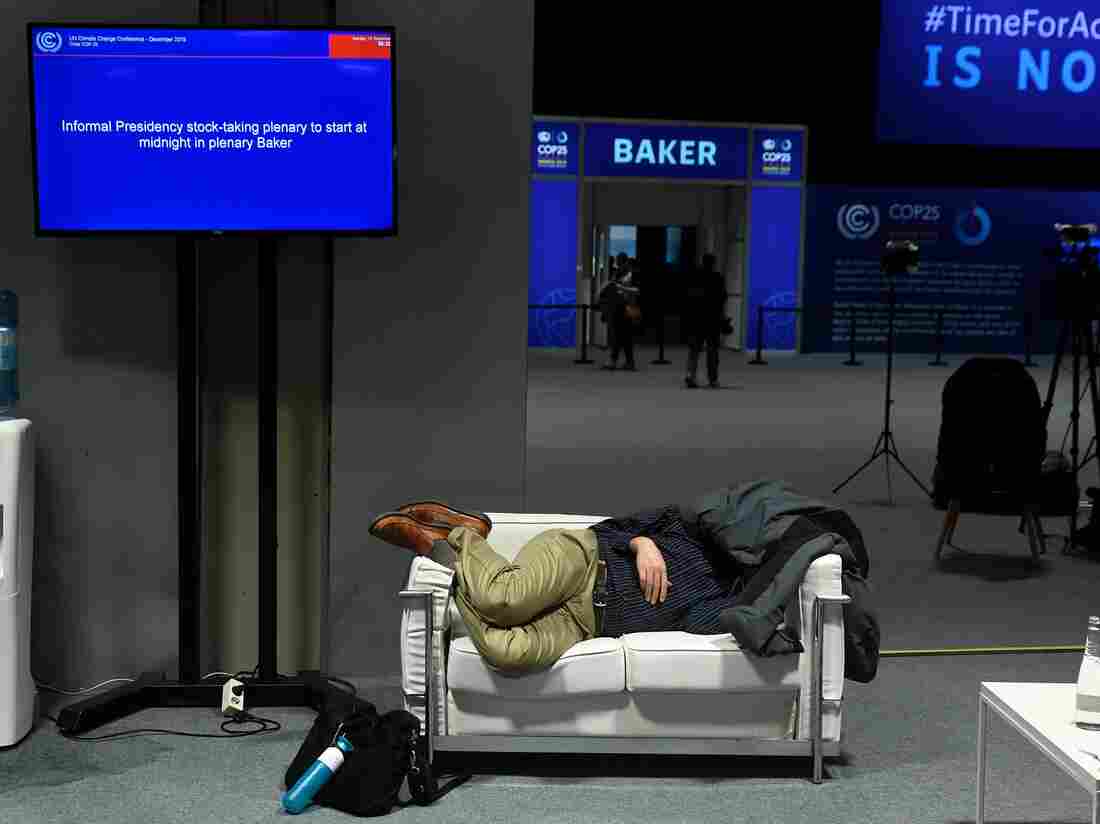 A man takes a nap during the talks in Madrid on Sunday, the longest in 25 years of the U.N. climate change meetings. The chairwoman had scheduled delegates to meet at 1:30 a.m. on Sunday to resume negotiations. Oscar Del Pozo/AFP via Getty Images hide caption 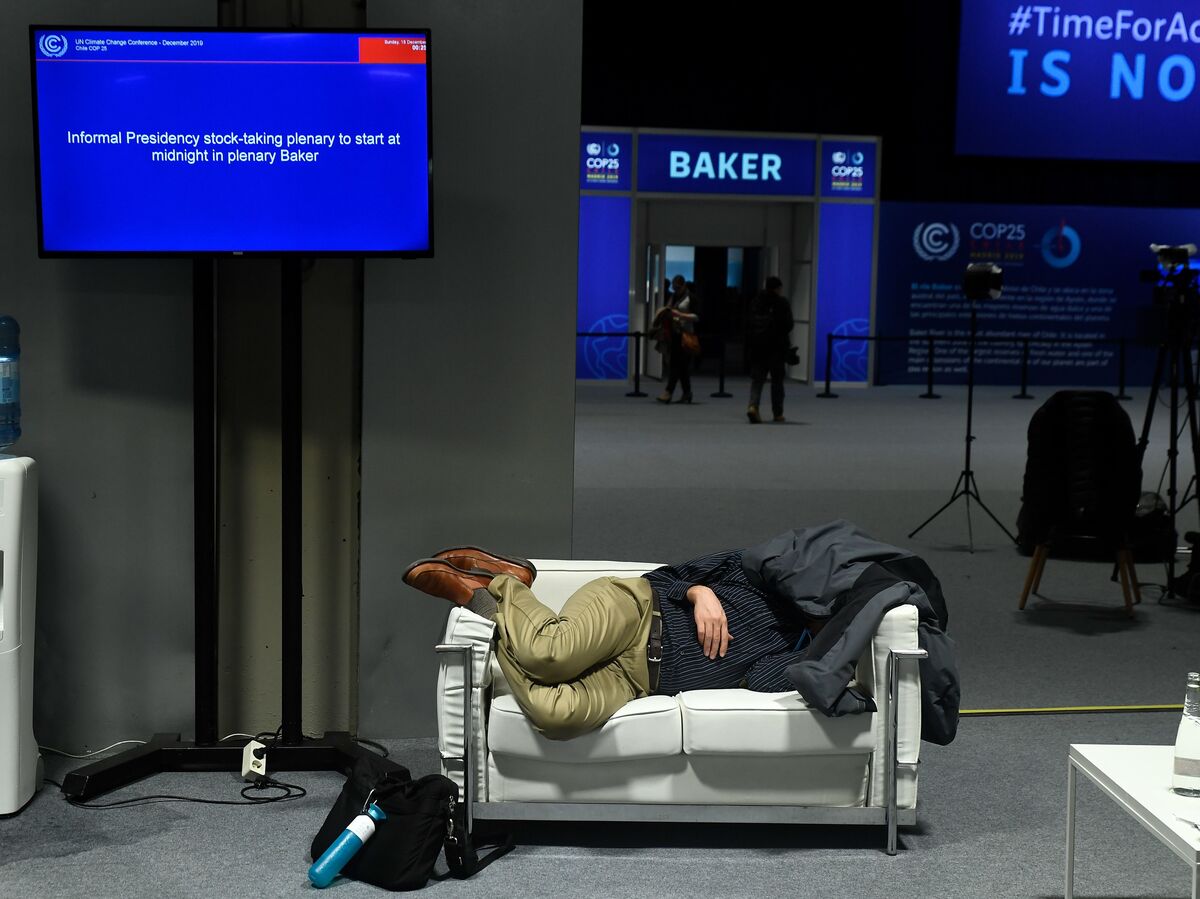 A man takes a nap during the talks in Madrid on Sunday, the longest in 25 years of the U.N. climate change meetings. The chairwoman had scheduled delegates to meet at 1:30 a.m. on Sunday to resume negotiations.

One of the key issues that was to be resolved at the summit was how to regulate carbon markets, which would put a price on emitting carbon dioxide. But no agreement was reached, and the topic will now be taken up at next year's talks in Glasgow. Another subject shelved for now was the issue of liability for damages caused by rising temperatures; the AP reports that the U.S. was the major resistor on that topic.

Among the other countries that delegates said had dragged their feet on bolder action were China, Brazil, Australia and Saudi Arabia.

Helen Mountford, vice president for Climate and Economics at World Resources Institute said in a statement that the negotiations "fell far short" of expectations. "Instead of leading the charge for more ambition, most of the large emitters were missing in action or obstructive," she said. "This reflects how disconnected many national leaders are from the urgency of the science and the demands of their citizens. They need to wake up in 2020."

"This is the biggest disconnect between this process and what's going on in the real world that I've seen," Alden Meyer, director of strategy and policy for the Union of Concerned Scientists, told The Washington Post. He has been attending climate talks since 1991.

"You have the science crystal on where we need to go. You have the youth and others stepping up around the world in the streets pressing for action," he added. "It's like we're in a sealed vacuum chamber in here, and no one is perceiving what is happening out there — what the science says and what people are demanding."

There was one bright spot: In Brussels, the EU agreed on Friday to move forward with its commitment to carbon neutrality by 2050. Poland, which is highly reliant on coal and opposed the move, has been exempted for now.

In Madrid, climate activists including many young people demanded that negotiators and world leaders do better to stem global warming.

Activists from Extinction Rebellion dumped horse manure outside the meeting venue on Saturday. They included a brief note to the leaders: "The horses*** stops here."

"Just like rearranging deckchairs on the Titanic, this COP's fiddling with carbon accounting and negotiating of Article 6, is not commensurate to the planetary emergency we face," the group said in a statement. "[T]hose travelling first class are still enjoying the party too much to hear the cries of those already drowning in the decks below."