Accessibility links
Heisman Winner Spotlights Hunger In His Hometown, And Food Pantry Donations Pour In "I'm up here for all those kids in Athens and in Athens County that go home to not a lot of food on the table, hungry after school," LSU quarterback Joe Burrow said when accepting the trophy. 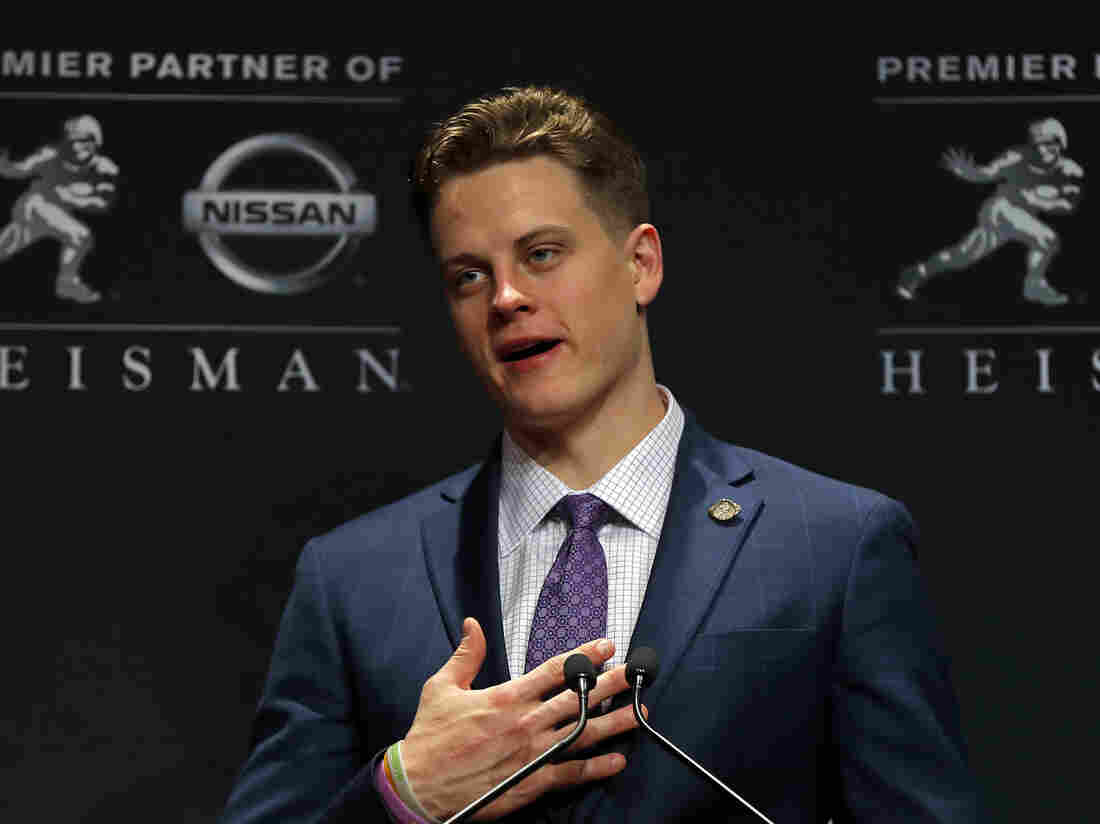 LSU quarterback Joe Burrow described the poverty of his Ohio hometown during his Heisman Trophy acceptance speech. Since then, the Athens County Food Pantry has received a flood of donations from around the U.S. Adam Hunger/Getty Images hide caption 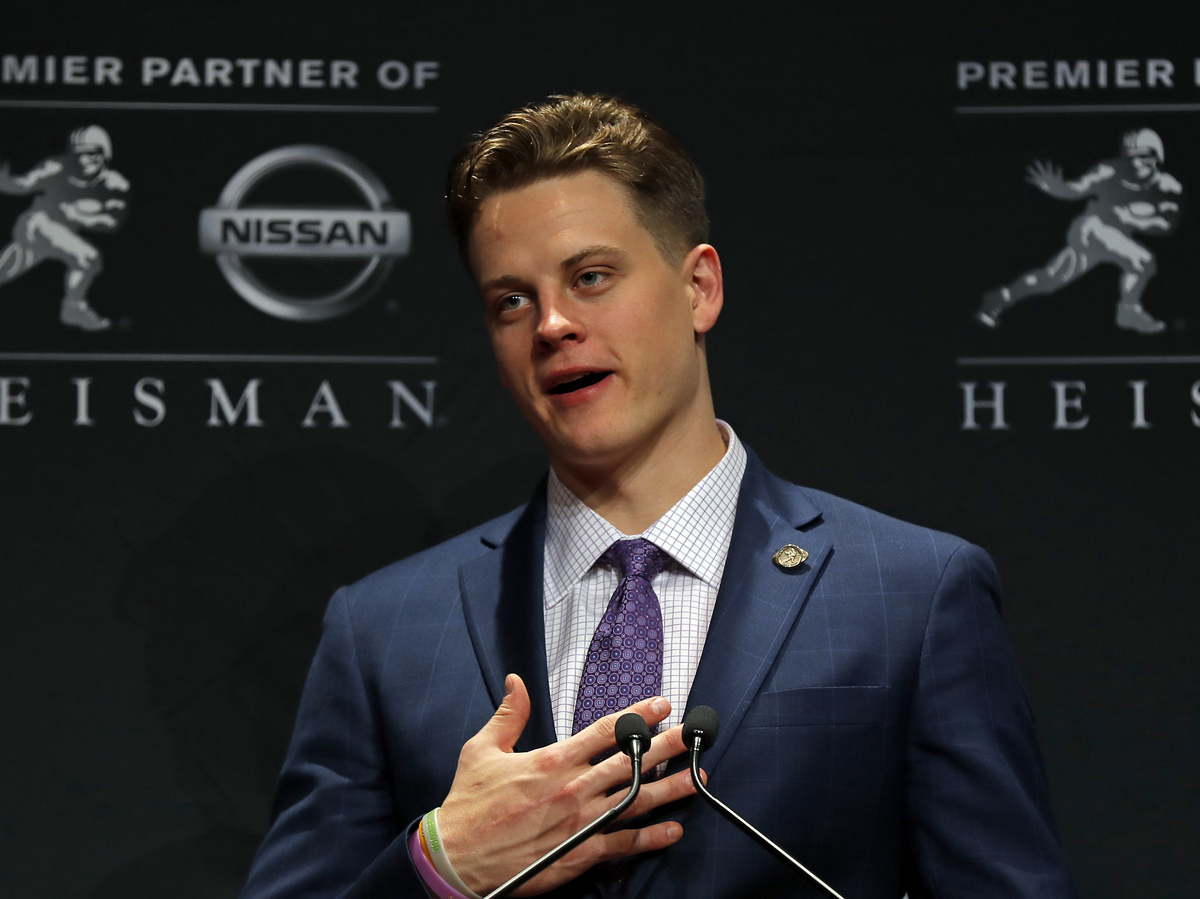 LSU quarterback Joe Burrow described the poverty of his Ohio hometown during his Heisman Trophy acceptance speech. Since then, the Athens County Food Pantry has received a flood of donations from around the U.S.

When LSU quarterback Joe Burrow won the Heisman Trophy on Saturday, he used his acceptance speech not only to thank his teammates, his family and his coach — but also to highlight the struggles of people in his small hometown in Ohio.

"Coming from Southeast Ohio, it's a very impoverished area," Burrow said, in an emotional address during which he frequently brushed away tears. "The poverty rate is almost two times the national average, and there's so many people there that don't have a lot.

"I'm up here for all those kids in Athens and in Athens County that go home to not a lot of food on the table, hungry after school," he continued. "And you guys can be up here too."

A lot of people in Athens County watched that speech, and at least one of them had the idea to use the moment to support a good cause.

"Let's answer Joey's call to action by supporting a local nonprofit that serves food to more than 5,000 households in Athens County each year," Drabold wrote on Facebook.

More than $250,000 has been collected for the local nonprofit organization in the past 48 hours, with donations from more than 7,300 people.

For the Athens County Food Pantry, the windfall has been remarkable. "We're still trying to come to terms with the reality that this isn't a dream," says Karin Bright, the food pantry's president. "It's amazing."

Burrow grew up in Athens, where his father was the defensive coordinator for the football team at Ohio University. He attended Ohio State, hoping to eventually become the starting quarterback, but it didn't pan out. Burrow graduated in three years and transferred to LSU, where he thrived.

The 23-year-old quarterback's breakout performance this season has led No. 1 LSU to its first College Football Playoff berth. The Tigers will play Oklahoma on Dec. 28; if they win, they could meet No. 2 Ohio State in the championship on Jan. 13.

Burrow's huge success in Baton Rouge has meant that an Appalachian Ohio town that'd never had much interest in SEC football was suddenly awash in the Tigers' purple and gold.

"It's like Joe has become everybody's next-door neighbor, the kid that everybody knows," Bright said.

Now admiration for Burrow is metamorphosing into donations to the food pantry serving Ohio's poorest county, where some 20% of residents struggle with food insecurity.

Opinion: Being Hungry In America Is Hard Work. Food Banks Need Your Help

"Hunger is a real problem in our county. We don't have much in the way of industry. So economically, we struggle and we're rural, so transportation makes it very difficult for people to get jobs and be able to get there," Bright explains. "People are struggling and they do their best. But it's really, really challenging here."

She says her organization does what it can to ease the burden for area families. The food pantry served more than 2,100 families last year; some chose to get help every month, some just a few times a year.

"We are just overwhelmed with gratitude that so many people want to support the work that we're doing in Athens County," Bright says.

The donations are already more than the food pantry receives in an entire year, so it is getting advice from the Athens County Foundation on best practices for using large donations carefully.

Bright was among those in Athens County who were watching on TV when Burrow gave the shoutout to his hometown on Saturday.

She says her eyes began to tear as Burrow spoke about kids coming home to no food on the table, because she has worked with those families and knows the struggles they face.

"For him to bring that up ... this is a man who has not forgotten where he came from, and I don't think he ever will," she says. "I think he will always be grateful for the support of this community. And I think he wants to let the world know that it's a community that with some help, these kids can go further."

Beyond Pantries: This Food Bank Invests In The Local Community

It may already be working. Drabold, the Athens native who started the fundraiser, says that his wife is a special education teacher at a local elementary school. On Monday, students watched Burrow's speech and were told about the money raised for the food pantry.

"One of my wife's third-graders came up to my wife and said, 'I go to the food bank,' with her eyes beaming," Drabold writes. "She was proud to say that she did. She was proud!"