Accessibility links
'Wattam' Is Keita Takahashi's Latest Video Game Of Radical Joy From the designer of Katamari Damacy and other cult favorites comes a new work — one just as eccentric and earnest as his past games. 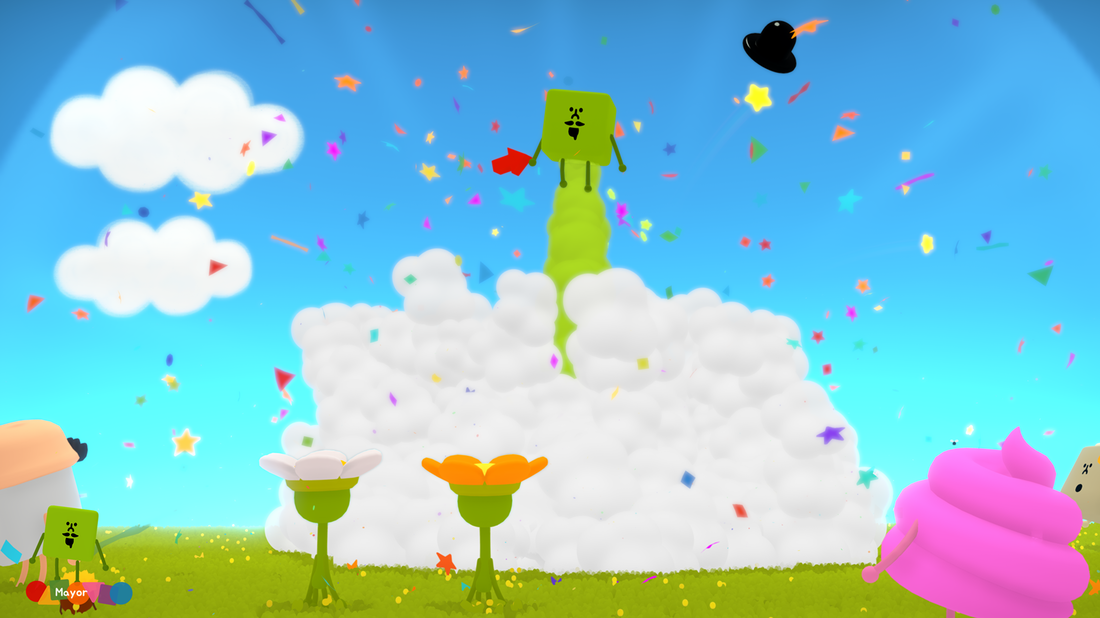 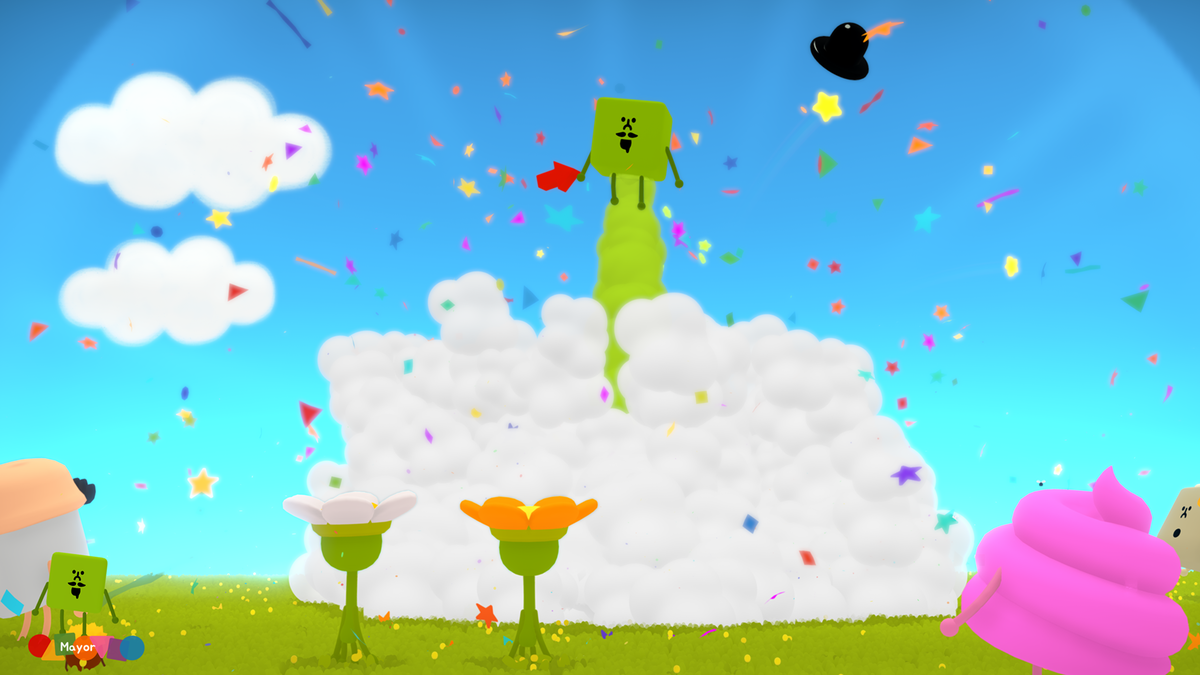 The Mayor, a green cube with a top hat, goes "kaboom" in Wattam.

The video game designer Keita Takahashi is best known for Katamari Damacy, released in 2004. It's about a god named the "King of All Cosmos" who, while drunk, accidentally destroys the stars in the sky. His son "The Prince" is left to clean up his mess by rolling up objects on Earth into sticky masses that grow so large they become new stars.

Katamari quickly earned an impassioned fandom. It had an eccentric and original aesthetic, but simple and satisfying gameplay. It was a surprise commercial hit in North America, and also a critical success. It's one of 14 video games that helped establish a new category of art in the Museum of Modern Art's permanent collection.

After six years of development, Takahashi's latest game Wattam comes out today on PlayStation 4 and PC. Takahashi has made a reputation for making video games that are eccentric, absurd and surprisingly sincere — and Wattam, in many ways, follows suit.

Robin Hunicke is now the co-founder of Funomena, the studio that developed Wattam. But she has long counted herself among the devout ranks of Katamari fandom.

Back in 2004, she helped exhibit Katamari at the Game Developers Conference in San Francisco as part of a workshop on experimental games. Keita Takahashi gave a presentation that blew her away.

Roll It Up: 'Katamari Damacy,' Reviewed

Roll It Up: Katamari Damacy

"He showed the gameplay, but then he went all the way to the credits screen," Hunicke said. "You get to the point where you can roll up all the countries on Earth. And so you're making a katamari of all of us. Keita said, in a very heartfelt way, that he had been destroyed by the idea that we were going to keep fighting and killing each other."

Takahashi's games are funny and absurd at the surface, but kind and earnest at their cores. Although he originally studied to be a sculptor, he became upset when his classmates were throwing out their work after receiving grades on their projects. "I was very shocked about that," Takahashi said. "We have an environmental crisis. I don't want to make more garbage."

Takahashi aimed to make work that was useful, but also made people laugh. While still in school, he sculpted a functional planter in the form of a goat. The water runs through the goat's back and drains out of its udders.

When Takahashi presented the sculpture to his peers, they laughed. He saw a transformative power in that laughter, and it's an impulse that has powered his work since.

Wattam demonstrates that trademark humor, said Harry DeLorme, who exhibited a survey of Takahashi's work this year at the Telfair Museums in Savannah, Ga. DeLorme pointed out that one Wattam character is a mouth that eats other characters and excretes them as poop. "It's full of very strange things," he said.

Also at the exhibit were early Takahashi sculptures, as well as designs for a since-cancelled (and seemingly very dangerous) playground.

DeLorme said that Takahashi's games work so well in a fine-art context because they have a singular "tactile quality." Tenya Wanya Teens, for example, has 32 buttons and two joysticks. It's about two teenage boys, and was designed to mimic the awkwardness of adolescence.

The controls are color-coded to different activities. But the colors switch around as the game progresses, making seemingly simple tasks more challenging. "You think the character is going to tell a girl he loves her, and then he starts urinating," DeLorme said.

In comparison to some of Takahashi's prior work, Wattam feels less cynical — more earnest, kinder. It opens as a green cube wearing a top hat — it's named the Mayor — sits on a rock. The Mayor is crying. But pretty soon, the Mayor gets up and begins to explore. "You get the sense that something bad has happened, and that all of the beings that inhabit the world have been lost," DeLorme said.

Other beings start to show up — all in the form of everyday objects, like toilets or sushi rolls. They interact with each other in joyous and simple ways: they climb atop one another, hold hands, run in circles, explode, laugh together.

Takahashi said he came up with the idea for Wattam when he moved to Vancouver and was living in a place with a diverse population. "We still have some issues, or problems, or conflict in this world," he said. "War, fighting ... because of a different perspective, different religion, different skin color. I believe that differences make a good deep culture."

He also wanted players to feel a kind of reverence for the everyday objects that we sometimes don't pay attention to. He said that in our fast-fashion economy, it's easy to treat necessary things as if they are expendable. "I wanted to make people realize there are no unnecessary things," he said. "A cup. A chopstick. Those are very important."

Takahashi has always had some difficulty treating his own work with this kind of reverence. Earlier this year, as part of his exhibit at the Telfair Museums, he gave a presentation to a group of children and students. On one slide, an arrow pointed upward, denoting more useful professions: sanitation workers, doctors, farmers. Beside the arrow pointing downward? Game designers and sculptors.

Takahashi's humility and self-deprecation is well-documented. In 2005, he told the BBC that in 10 years he would not be making video games any more. In another interview with Gamasutra in 2009, he earnestly asked the interviewer if he had any suggestions on how to be a better commercial game designer.

I asked Takahashi if, despite many comments seemingly to the contrary, he liked making video games. He said yes, but then elaborated that designing video games is a luxury. "We have the doctor, and the farmer," he said. "Based on their fantastic job, I fortunately can make a video game."

But Takahashi keeps making video games. "I want to be a billionaire," he said, laughing. "So I can make my own playground."

At whatever cost, Takahashi is set on finding more ways to make us play.