Accessibility links
Trump Impeachment Timeline: From Early Calls To A Full House Vote As the House prepares to debate two articles of impeachment against President Trump on Wednesday, a look back at how Congress got here. 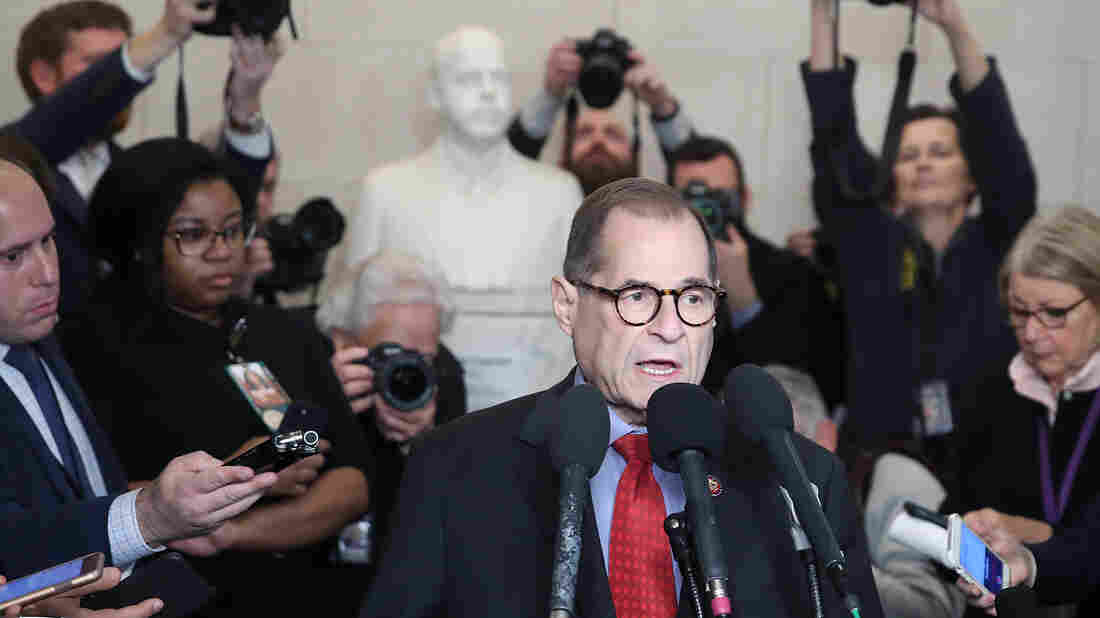 House Judiciary Committee Chairman Jerry Nadler speaks to the media after the committee voted on the two articles of impeachment against President Trump on Dec. 13. Mark Wilson/Getty Images hide caption 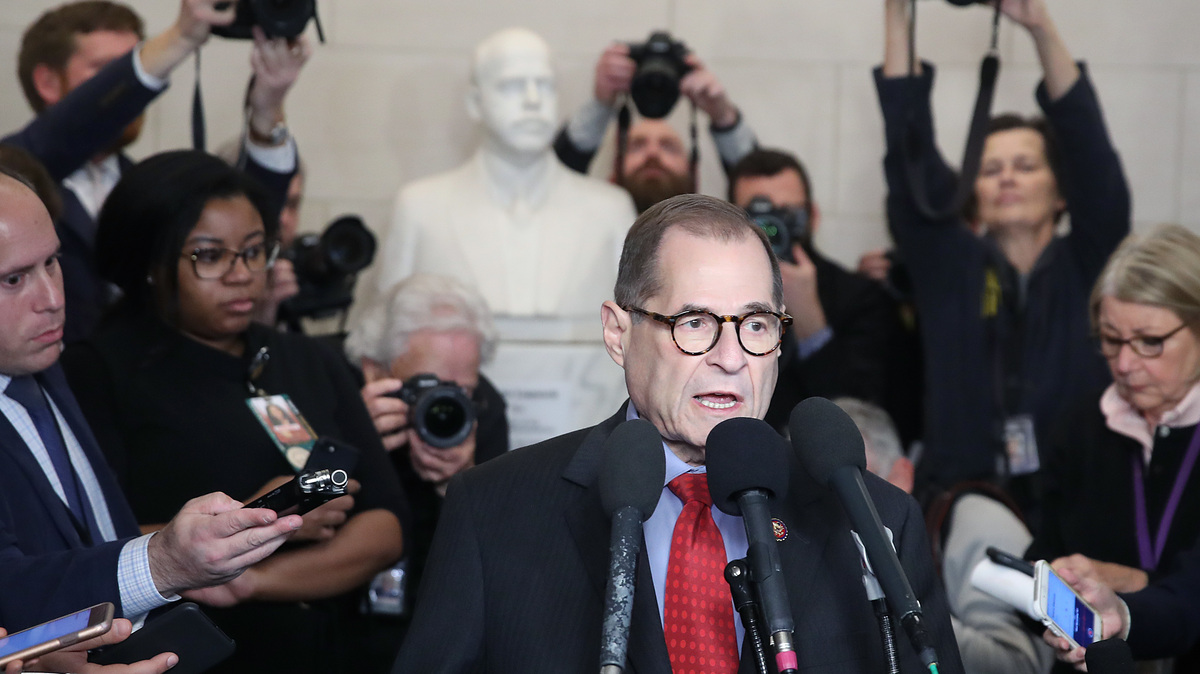 House Judiciary Committee Chairman Jerry Nadler speaks to the media after the committee voted on the two articles of impeachment against President Trump on Dec. 13.

The House is expected to vote Wednesday on two articles of impeachment against President Trump. A handful of congressional Democrats have been calling for Trump to be impeached even before they won control of the House in the 2018 election. But the majority of the caucus didn't back Trump's removal until this fall. Here's a look at how we got here:

Two Democratic congressmen filed the first article of impeachment against Trump back in July 2017. Reps. Brad Sherman of California and Al Green of Texas filed an article charging Trump obstructed justice, two months after the president fired then-FBI director James Comey. But with the House then controlled by Republicans, the effort was largely ignored.

When Democrats won a majority in the House after the 2018 elections, impeachment talk grew louder and more, well, colorful. Sherman and Green reintroduced their article of impeachment on Jan. 3, and that same day, freshman Democrat Rashida Tlaib, at a MoveOn reception on Capitol Hill, proclaimed Democrats would "impeach the motherf*****."

House Speaker Nancy Pelosi sought to tamp down pro-impeachment sentiments in the early days of the new Congress, calling it "divisive" and suggesting lawmakers should wait and see how the investigation into Russian interference in the 2016 election led by special counsel Robert Mueller played out.

"He's just not worth it"

Pelosi repeated her opposition to impeachment in a Washington Post magazine interview in March, words that Republicans have repeatedly pointed to in the months since. She said that "unless there's something so compelling and overwhelming and bipartisan, I don't think we should go down that path, because it divides the country," adding of Trump, "He's just not worth it." 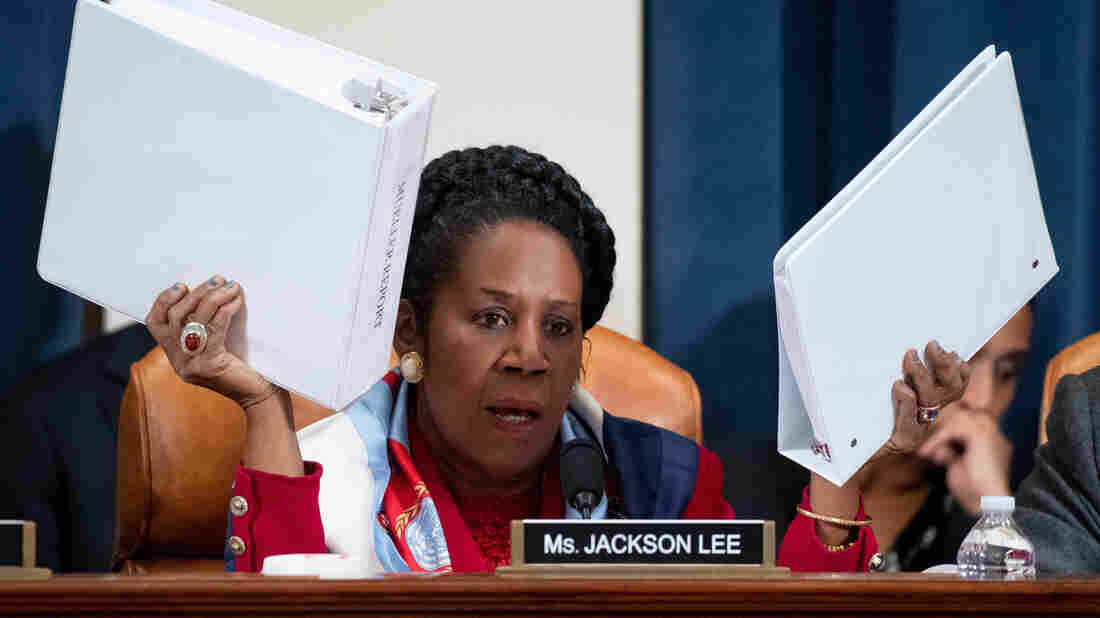 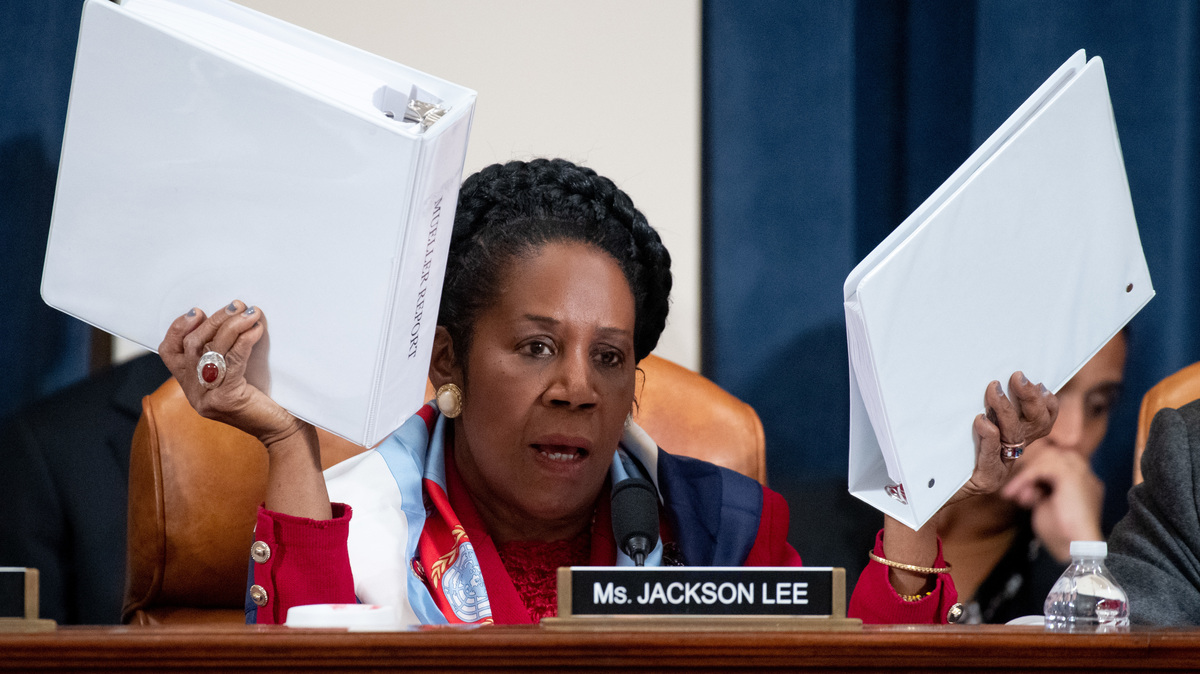 Rep. Sheila Jackson Lee holds up copies of Mueller's report as she questions constitutional scholars before the House Judiciary Committee earlier this month.

In April, Mueller's redacted report was publicly released. While it found no evidence that the Trump campaign actively conspired with Russia's efforts to interfere in the 2016 presidential election, it did not exonerate the president from allegations that he obstructed the probe.

The findings gave more ammunition to Democrats who called for Trump's impeachment, including a growing list of those running for president.

Poll: Opinions Of Impeachment Remain Unchanged; Signs Point To Base Election In 2020

Behind the scenes moves

Unbeknownst to lawmakers, the groundwork or casus belli of the impeachment inquiry was being laid over the spring and summer of 2019, after Congress approved some $391 million in military aid to Ukraine. On June 19, Trump started asking about the Ukrainian aid, and a few weeks later, officials have testified the aid was put on hold by the administration.

On July 25, Trump made his now infamous call to Ukrainian President Volodymyr Zelenskiy. According to a partial transcript, Trump tells him, "I would like you to do us a favor though," and later asks that Zelenskiy "look into" activities by potential 2020 opponent Joe Biden and his son Hunter in Ukraine, as well as a discredited theory that Ukraine interfered in the 2016 election, not Russia. 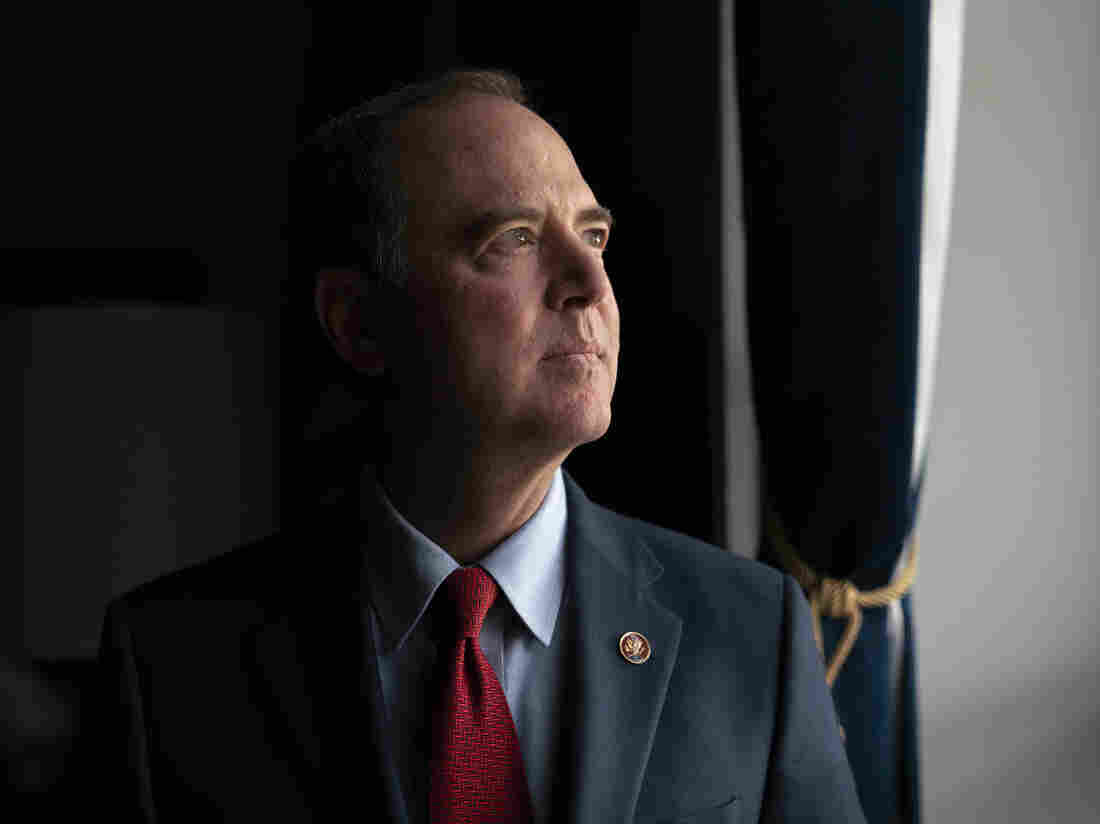 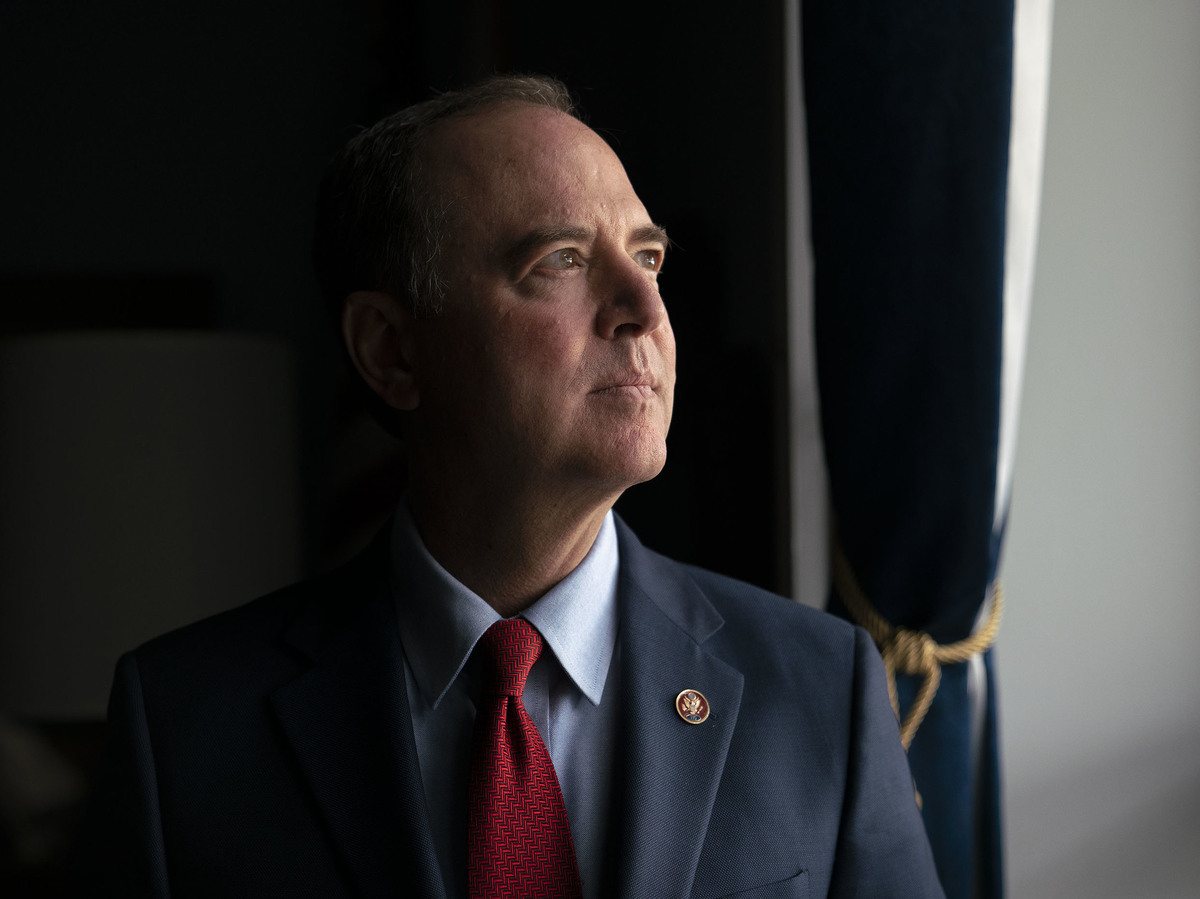 None of Trump's machinations over Ukraine aid, nor his requests of Zelenskiy, were known publicly, until a still anonymous whistleblower came forward and filed a complaint on Aug. 12 to the Senate and House intelligence committees. We later learned the whistleblower accused the president of "using the power of his office to solicit interference from a foreign country in the 2020 election."

But the whistleblower's complaint was withheld from Congress per an order from the newly named acting director of national intelligence. When House Intelligence Committee Chairman Rep. Adam Schiff, D-Calif., discovered in September that a complaint had been filed, he threatened to sue the administration in order to force it to turn over the complaint.

On Sept. 20, The Wall Street Journal published a story alleging that "President Trump in a July phone call repeatedly pressured the president of Ukraine to investigate Joe Biden's son, according to people familiar with the matter." It was the first time the public found out the details of the July 25 phone call, which set in motion a series of events culminating in the impeachment vote. 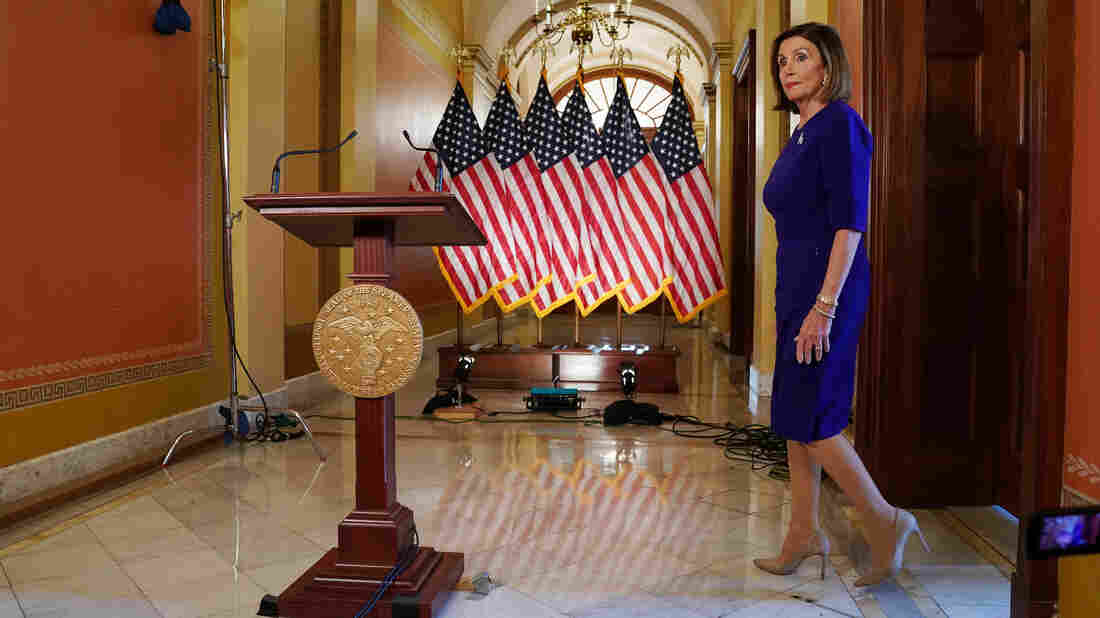 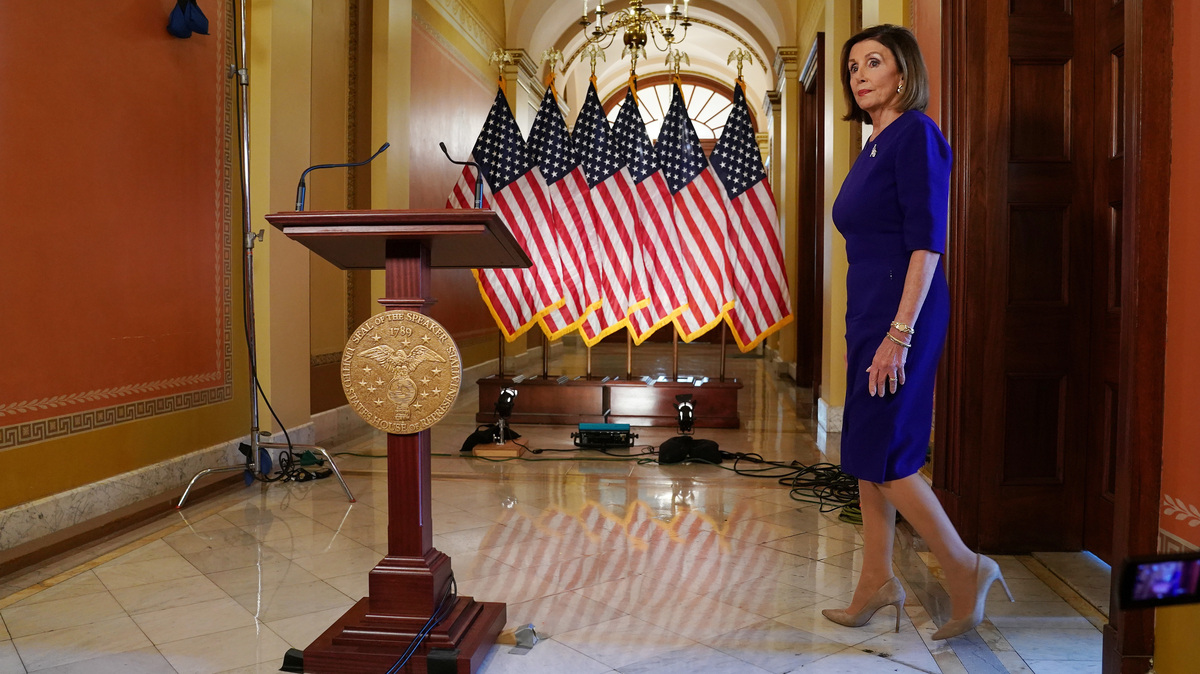 On Sept. 24, citing that report and others, Pelosi said Trump is "calling upon a foreign power to intervene in his election. This is a breach of his constitutional responsibilities." She then announced the start of a formal impeachment inquiry. "The president must be held accountable," she said. "No one is above the law." She said six congressional committees that had been investigating Trump's actions would continue under the auspices of the inquiry.

In early October, the combined Intelligence, Oversight and Foreign Affairs committees began taking depositions from key people involved in the Ukraine affair, including the special representative for Ukraine negotiations, a former ambassador to the country and other State Department officials. The depositions were open to committee members from both parties, although Republicans slammed the process, and at one point a group of GOP members not assigned to the relevant committees stormed the high-security room where the testimony was taken in a form of protest.

On Oct. 28, Pelosi announced the next stage in the impeachment inquiry. She said the House would vote that week on a resolution to officially authorize impeachment proceedings, including public hearings, and the release of the deposition transcripts. The formal inquiry would be led by Schiff, and the materials gathered from those hearings as well as a final report would be turned over to the Judiciary Committee. The process would also allow the president or his lawyers to take part, an invitation they decided to decline. 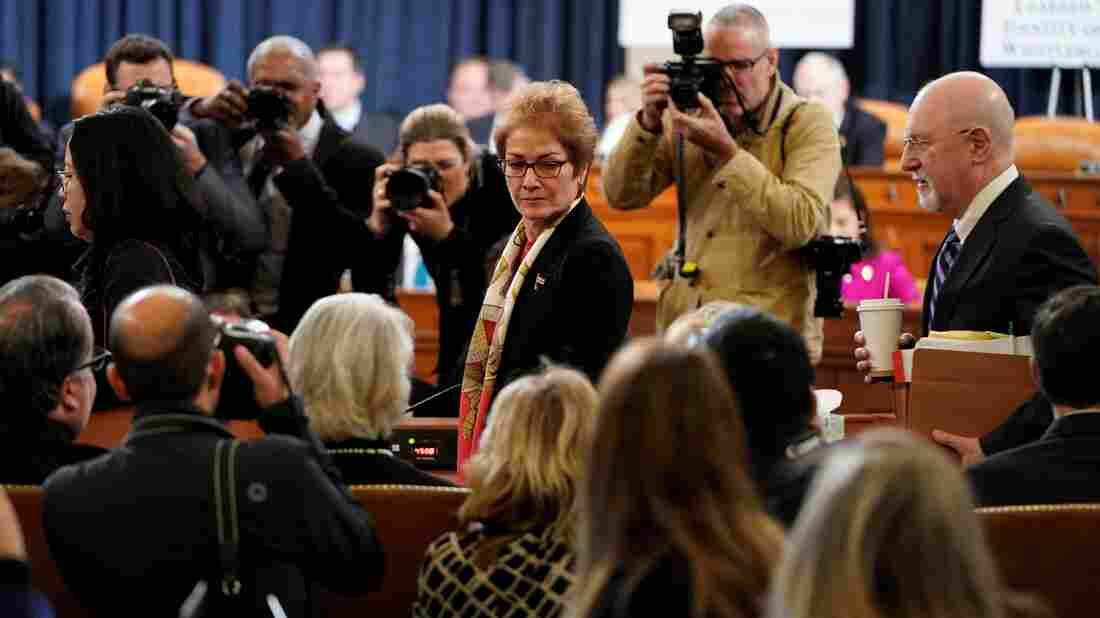 Marie Yovanovitch, former U.S. ambassador to Ukraine, returns from a break in her testimony before a House Intelligence Committee hearing as part of the impeachment inquiry on Nov. 15. Joshua Roberts/Pool/AFP via Getty Images hide caption 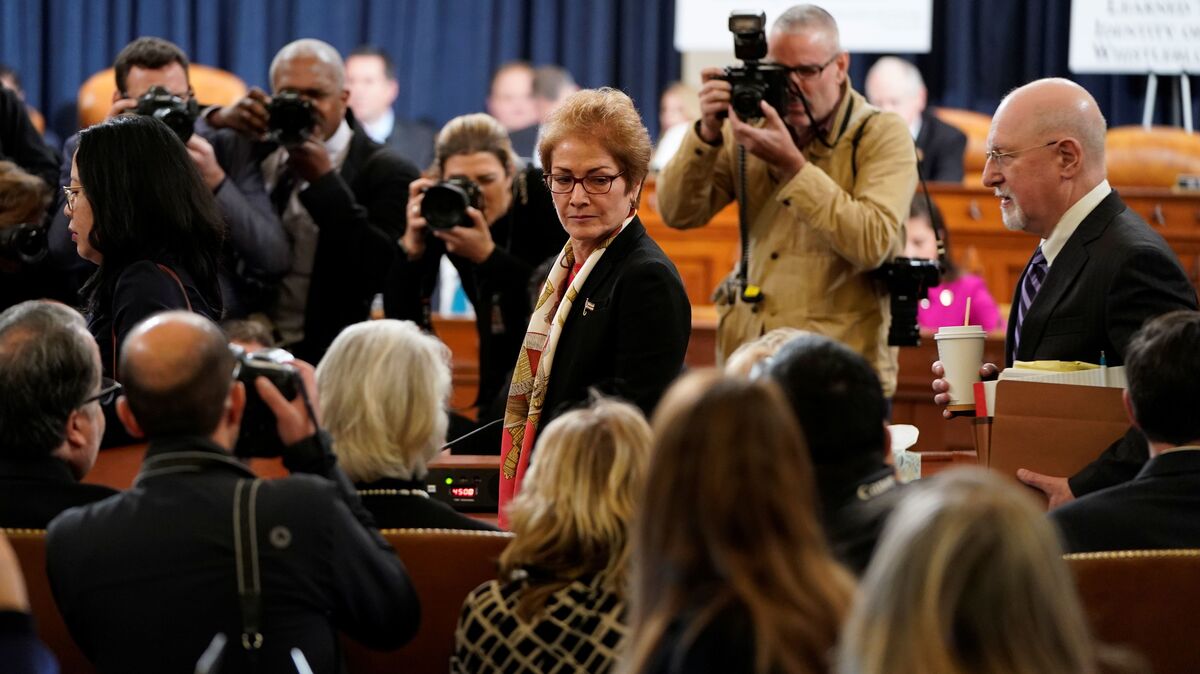 Marie Yovanovitch, former U.S. ambassador to Ukraine, returns from a break in her testimony before a House Intelligence Committee hearing as part of the impeachment inquiry on Nov. 15.

On Nov. 13, public impeachment hearings began in the Intelligence Committee. Lawmakers heard from a range of witnesses, including Lt. Col. Alexander Vindman, a National Security Council Ukraine expert who testified he thought Trump's phone call with the Ukrainian president was "improper;" former ambassador to Ukraine Marie Yovanovitch, who said she felt threatened by Trump's comments about her in that phone call; and the U.S. ambassador to the E.U., Gordon Sondland, who testified he believed Trump's demand that Zelenskiy open an investigation into the Bidens did constitute a "quid pro quo."

On Dec. 4, the scene shifted to the House Judiciary Committee, which began its phase of the impeachment hearings, taking testimony from a panel of constitutional law scholars. Three of the four on the panel said they believed impeaching Trump was called for.

Pelosi announces impeachment articles will be drawn up

The following day, Dec. 5, Pelosi announced that the House Judiciary Committee would draw up articles of impeachment against Trump. She said: "The president leaves us no choice but to act because he is trying to corrupt, once again, the election for his own benefit."

The House Judiciary Committee on Dec. 12 spent more than 14 hours in a highly partisan and at times emotional debate deliberating over two articles of impeachment, accusing Trump of abusing the power of his office and with obstructing Congress. The following day, the panel approved each article on a party-line 23-17 vote, making Trump just the fourth president in American history to face impeachment by the House.