Accessibility links
Fed Up With Far Right, Italy's 'Sardines' Protests Call For Civility And Equality They aim to pack public squares like sardines in a can, in protest against the far-right, anti-immigrant wave rising in Italian society and politics. 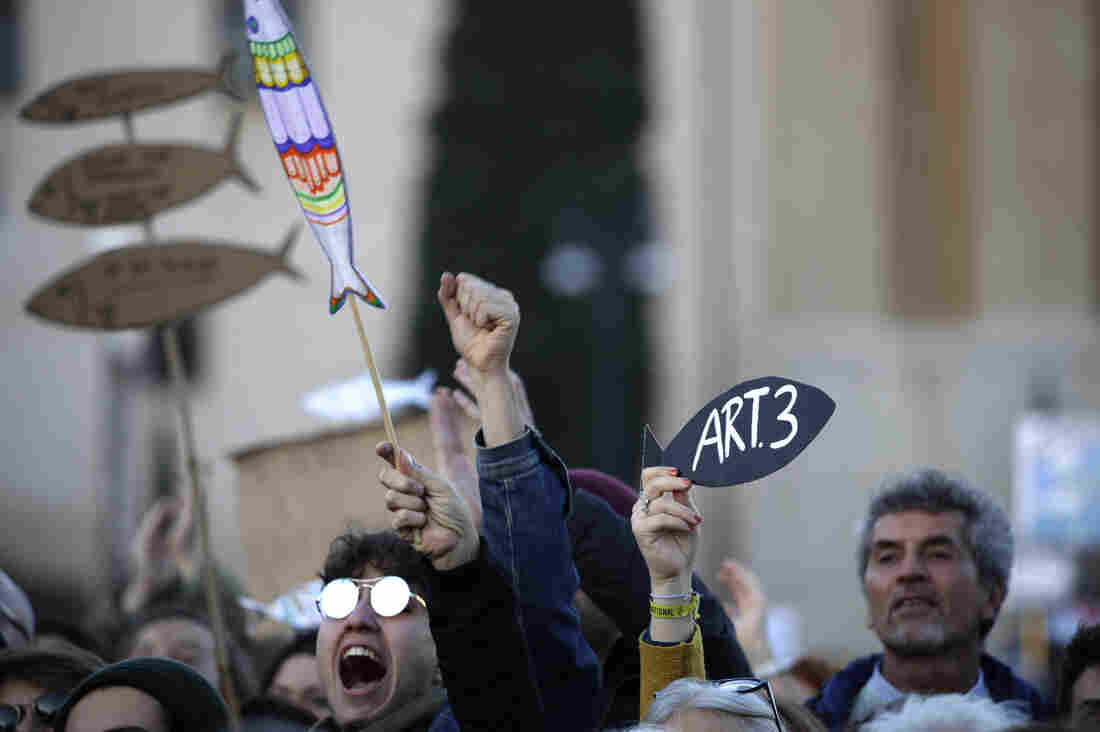 Italians gather in St. John Lateran Square in Rome for a demonstration of the "Sardines," a grassroots movement against right-wing populism, on Saturday. Gregorio Borgia/AP hide caption 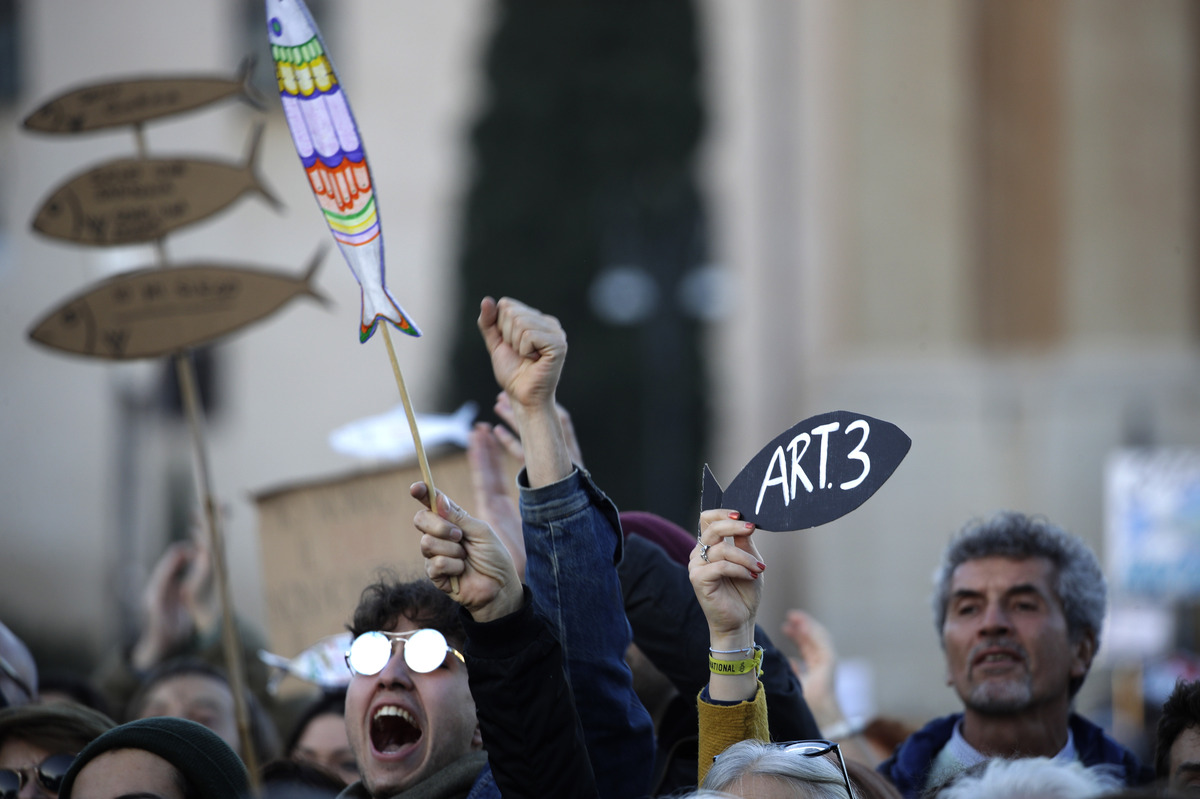 Italians gather in St. John Lateran Square in Rome for a demonstration of the "Sardines," a grassroots movement against right-wing populism, on Saturday.

They call themselves the "Sardines" — because they want to quietly pack Italy's main public squares like fish in a can. Organizers say their goal is to stop a far-right, anti-immigrant wave rising in Italian society and politics.

On Saturday, tens of thousands turned out in Rome's St. John Lateran Square for their largest rally yet. Retirees mingled with teenagers and families with kids, many holding fish-shaped signs. They sang Bella Ciao, a World War II-era anthem of the anti-fascist resistance.

For the past month, the grassroots Sardines movement against populism and racism has drawn growing crowds and intense national media attention. It comes as populist politicians have amassed large followings while promoting a nationalist agenda and bashing immigration, seeking to win regional Italian elections next month. To counter hateful rhetoric, the Sardines say they are staging peaceful flash mobs to spread messages of civility, equality and social inclusion.

"By taking a stand, we can create a new narrative — the first step toward a new reality," movement co-founder Mattia Santori told the crowd in Rome on Saturday. 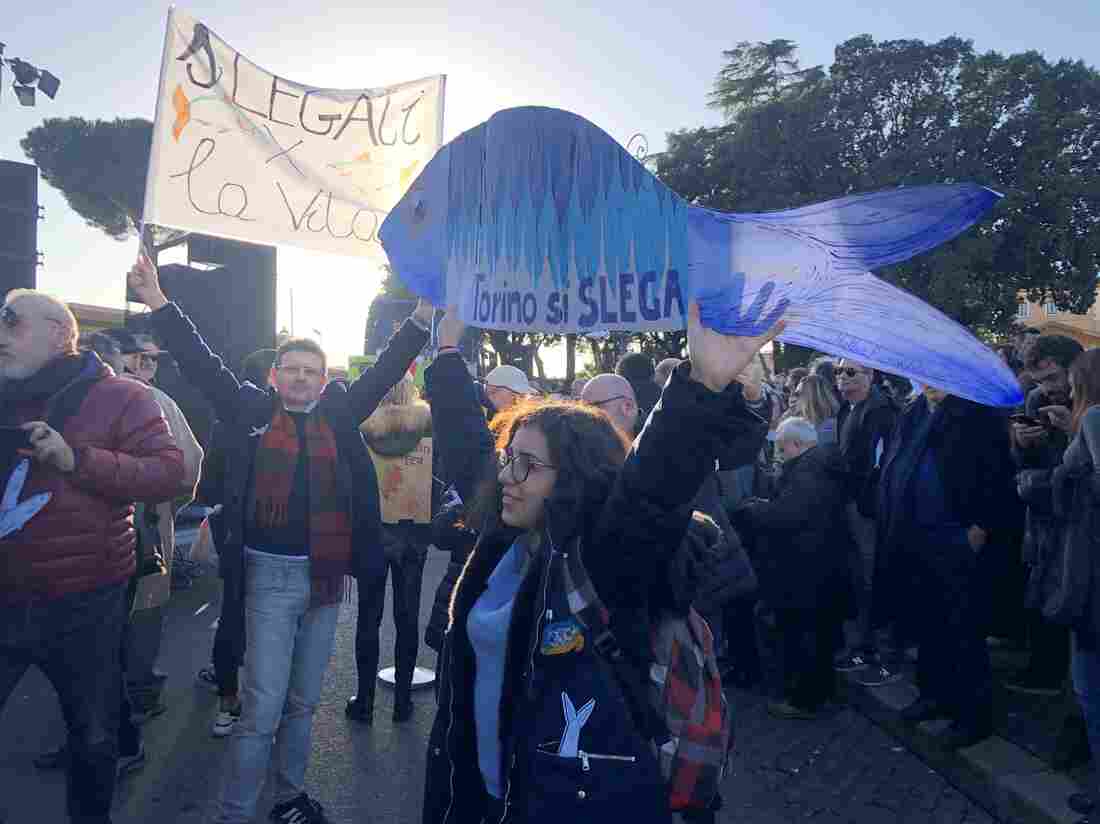 Participants in a rally in Rome hold sardine-shaped signs, a symbol of the movement. Sylvia Poggioli/NPR hide caption 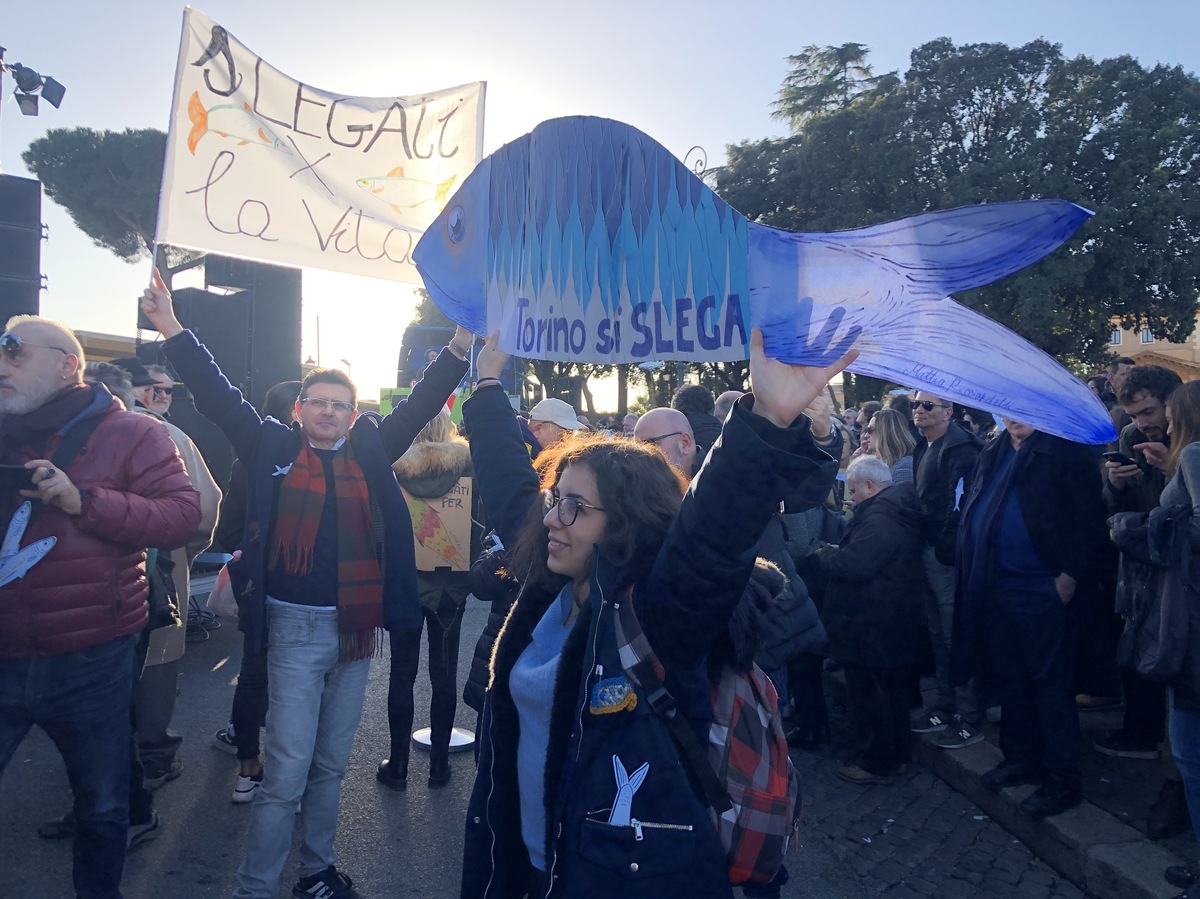 Participants in a rally in Rome hold sardine-shaped signs, a symbol of the movement.

The movement began a month ago in the northern Italian city Bologna in response to the growing popularity of the politician Matteo Salvini, leader of the right-wing, anti-immigrant League party.

Bologna is the capital of the Emilia-Romagna region. Once a center-left bastion, the region's attitudes have been shifting rightward and polls suggest the League could win regional elections there in January.

Posting on Facebook, Santori and three friends announced an anti-Salvini rally for Nov. 14. They aimed to attract 6,000 people — and more than doubled that turnout. The idea caught on in other Italian cities.

Then a man named Stephen Ogongo launched a Rome Sardines Facebook group around midnight a few days later. By morning, 10,000 requested to join. Today it has over 145,700 members.

A native of Kenya, Ogongo says he did not believe Italians were racist when he first arrived 25 years ago to study at Rome's Pontifical Gregorian University. But when right-wing politicians exploited frustrations over higher numbers of migrants, he says, many Italians kept quiet.

"This made racist politicians believe that they had a majority in the country because they were so vocal and their supporters who are equally vocal, that people who were not racist in a way went underground," he says. 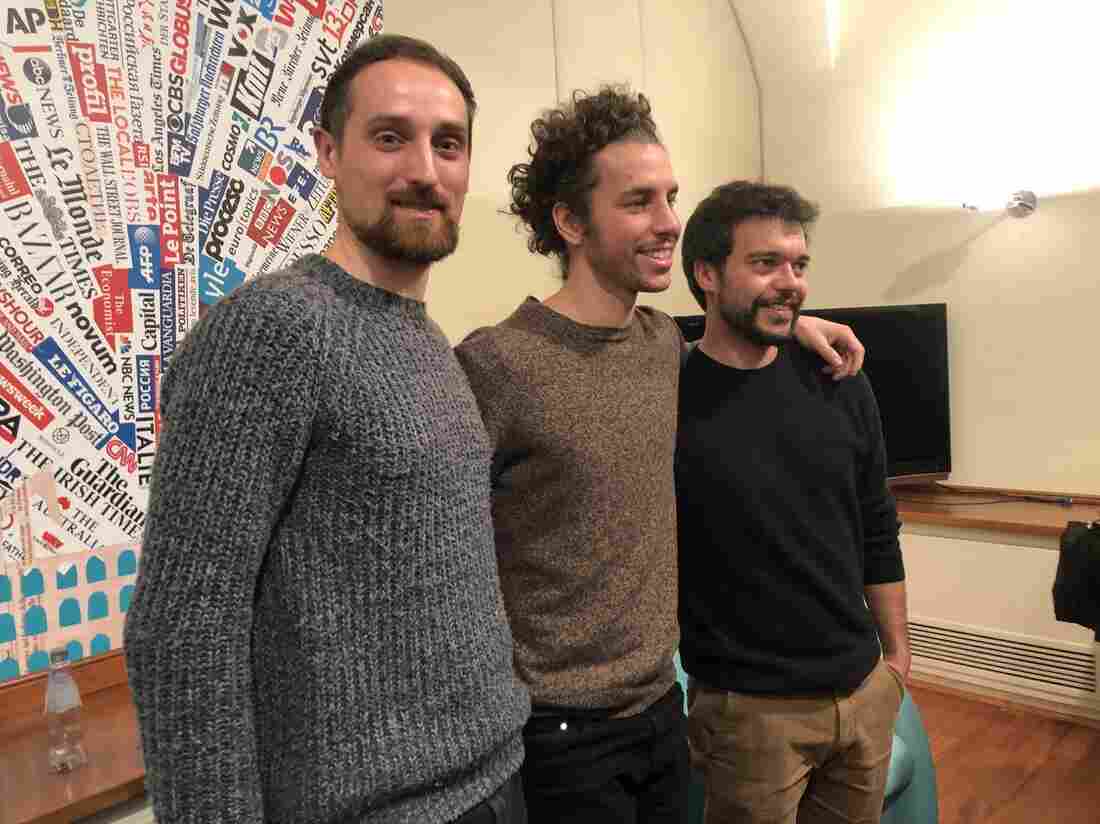 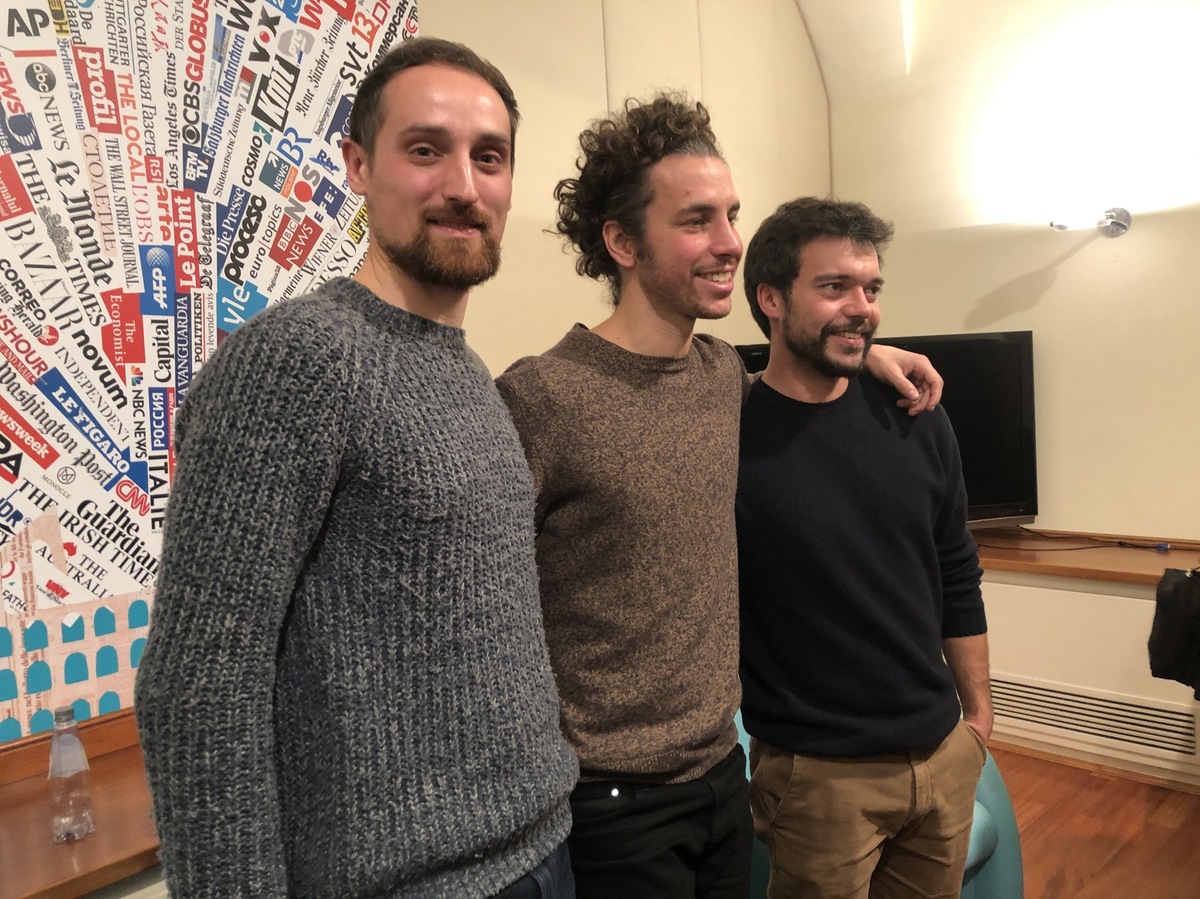 Roberto Marozzi (from left), Mattia Santori and Andrea Gareffa are three of the original Sardines founders in Bologna.

Andrea Gareffa, one of the four founders in Bologna, says the movement has given an opportunity to those who've long been silent. It's an opportunity "to gather and rediscover that the beauty and the strength that feeling close to each other can bring to the political discourse," he says.

Sardines in Rome this weekend expressed a similar sentiment.

"I feel in unison with these people," one Rome rallygoer, Tania Alessandri, said. "Their ideals have reawakened my political consciousness and stimulated my need to participate in the political process. I feel vital again."

Standing nearby, white-haired Settimia Migliori agreed. "There's something new in the air here — I like these young people's ideas. After so much hatred, oppression, exclusion and indifference, their language is new and civilized," Migliori said. 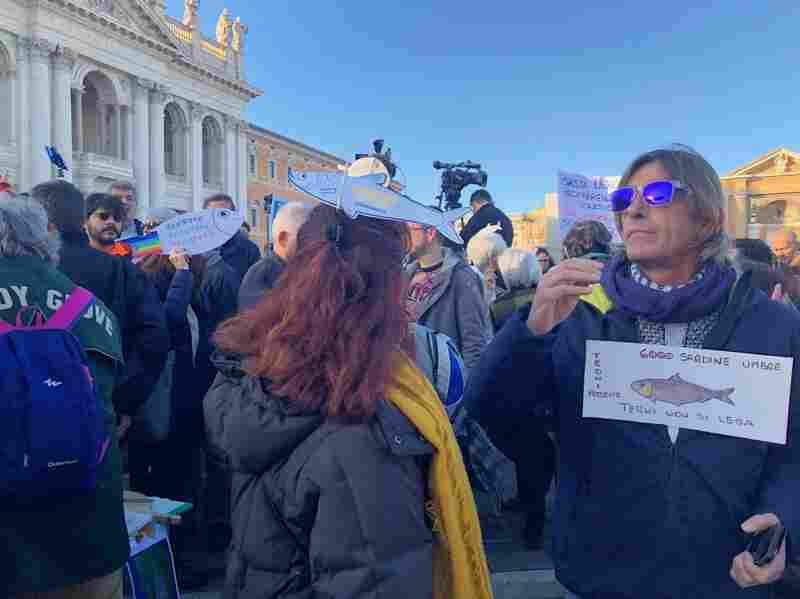 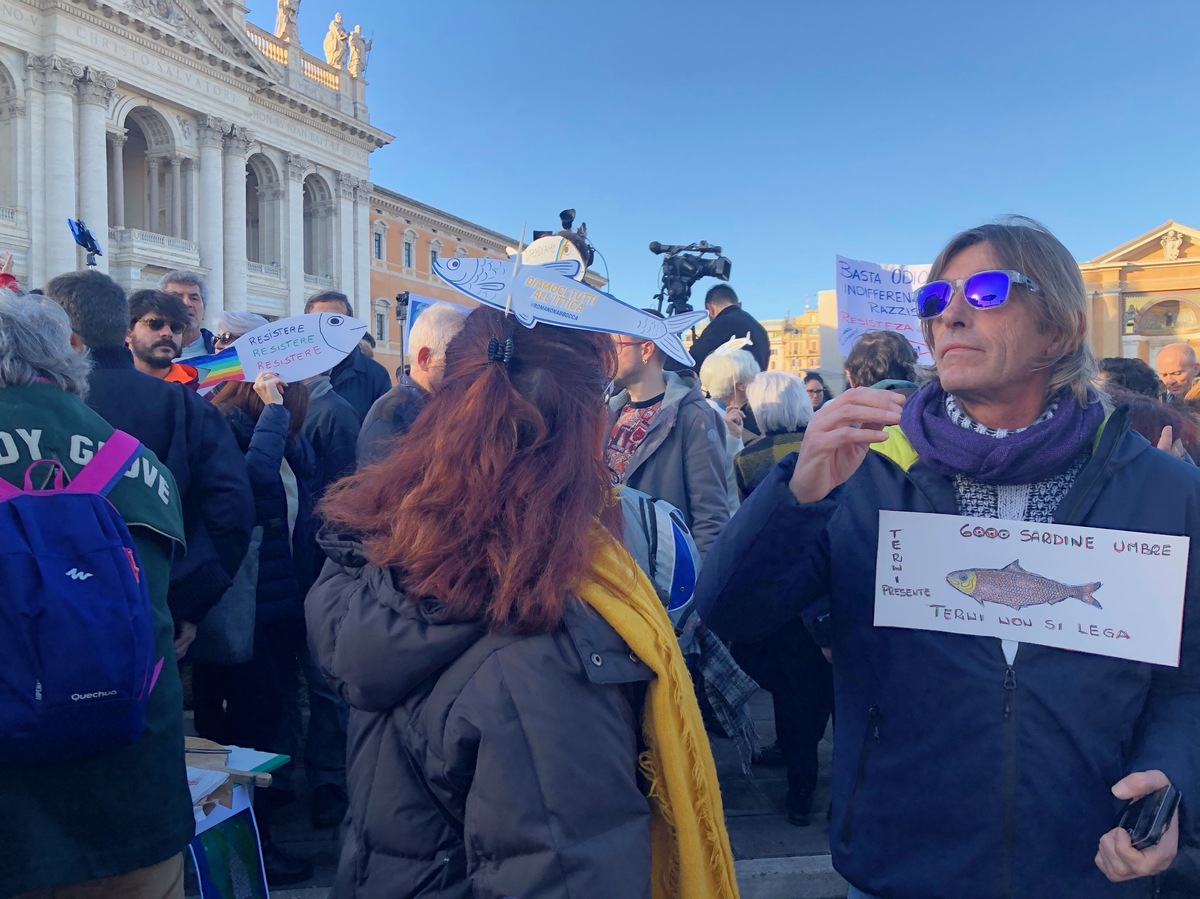 League leader Salvini has mocked the movement, tweeting that he likes kittens more because they "eat sardines." He later softened his tone, saying, "The more people participate, the better."

Sardines co-founder Santori does not want the movement to become a political party. He is aware, however, that the movement has tapped into something potentially powerful.

"How do we channel this energy?" he asks, "how do we reach our original goal to curb — hopefully stop — the populist wave and propose a political idea that's both serious and appealingly cool?"

Meeting after the Rome rally, the Sardines organizers agreed to continue to focus on regional elections in January. They plan to stage more rallies especially in small towns and rural areas — more vulnerable, they believe, to the siren call of right-wing populism.