Accessibility links
Sackler Family Pulled Billions From Purdue Pharma As Opioid Crisis Mounted According to a court filing Monday, the family pulled about $10.7 billion from Purdue since 2008 — ramping up withdrawals even after executives pleaded guilty to misleading regulators about OxyContin. 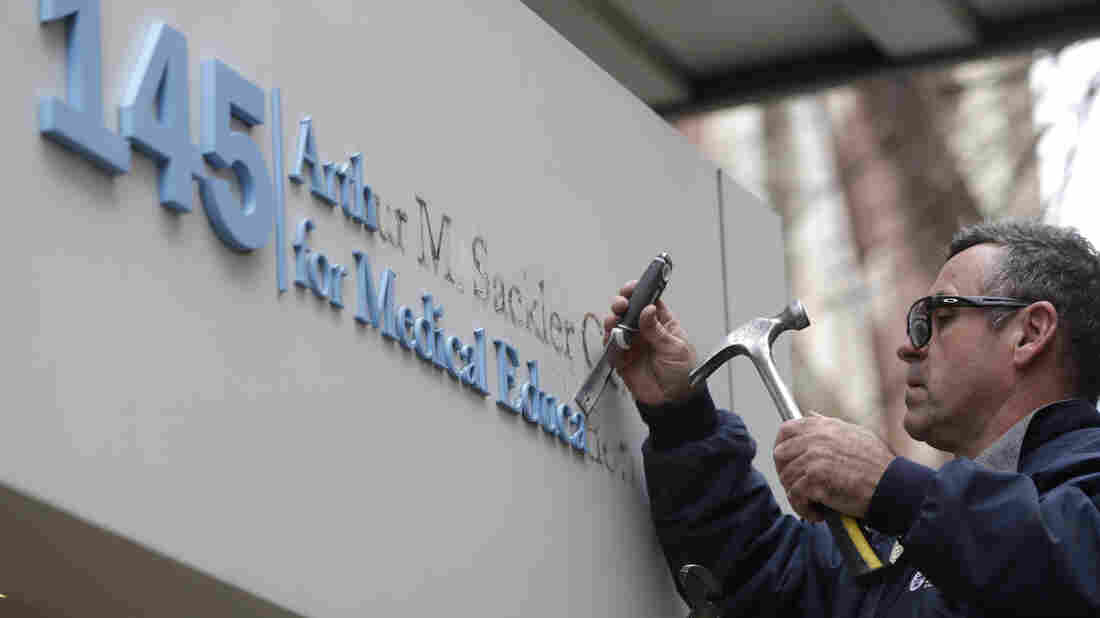 Tufts University stripped the Sackler name from several of its buildings and divisions earlier this month, citing the billionaire family's role in the opioid crisis. The founders of Purdue Pharma have come under intense scrutiny for how their company misled doctors and patients about the addictiveness of its signature medication. Steven Senne/AP hide caption 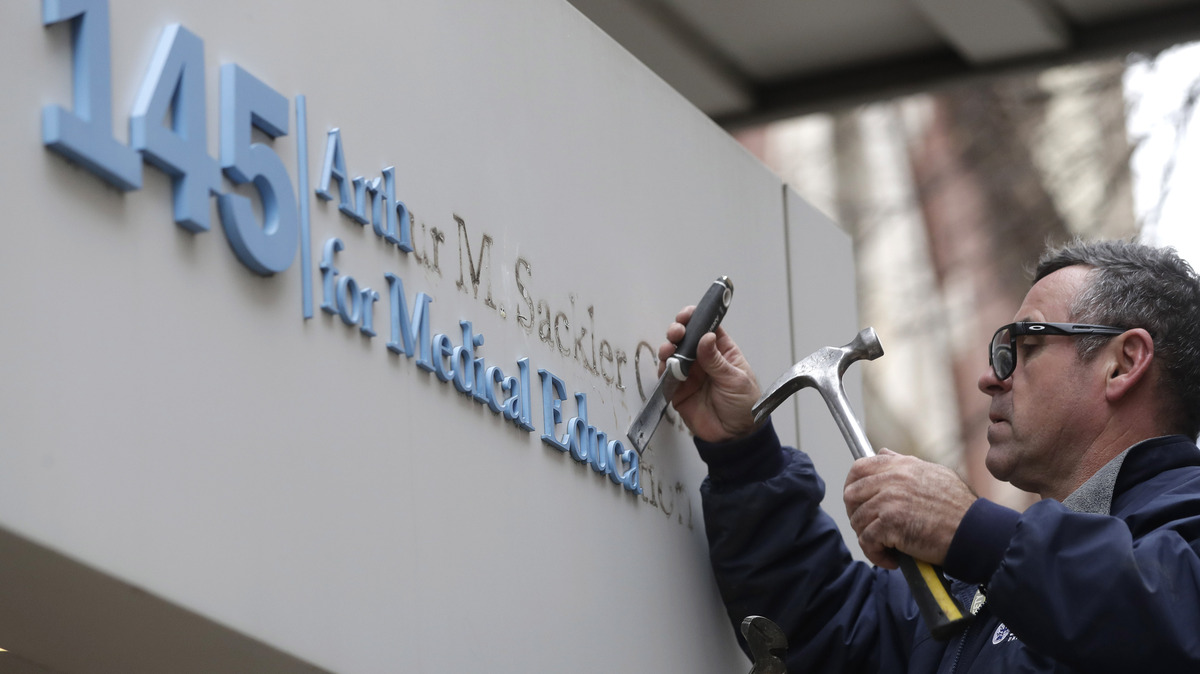 Tufts University stripped the Sackler name from several of its buildings and divisions earlier this month, citing the billionaire family's role in the opioid crisis. The founders of Purdue Pharma have come under intense scrutiny for how their company misled doctors and patients about the addictiveness of its signature medication.

The family that owns Purdue Pharma pulled billions of dollars from the company after introducing its signature opioid medication, OxyContin, growing personally wealthy as the heavily marketed drug took on a significant role in a nationwide addiction crisis.

An audit commissioned by Purdue, and introduced Monday during the company's bankruptcy proceedings, found that the Sackler family withdrew more than $12.2 billion from the company since federal regulators approved the sale of OxyContin in the mid-1990s. Roughly $10.7 billion of that sum was pulled since the start of 2008, after several Purdue executives had already pleaded guilty to misleading regulators and consumers about the drug's risks.

The findings are sure to be of interest to prosecutors and the drugmaker's creditors, who are trying to determine just how much the Sacklers and their company are capable of paying to help mitigate an addiction crisis that has caused more than 200,000 overdose deaths and cost an estimated tens of billions.

Purdue filed for Chapter 11 bankruptcy protection in September, as part of a controversial settlement with about two dozen state attorneys general. Included in the settlement is an offer of $3 billion from the Sackler family's personal fortune.

As staggeringly large as that sum may seem, the agreement's critics argue that the Sacklers should be paying much more. Just about as many top prosecutors object to the deal as those who support it. And in early October, they filed briefs with the court arguing that the family was simply trying to use bankruptcy protection "to avoid their own accountability."

"The Sacklers knew that the profits were not safe inside Purdue," reads the brief signed by 25 attorneys general. "[Former Chairman and President] Richard Sackler warned, in a confidential memo, that the company posed a 'dangerous concentration of risk.' Purdue's CFO [Edward Mahony] stated that a single lawsuit by a state Attorney General could 'jeopardize Purdue's longterm viability.' "

"So," it added, "the Sacklers pulled the money out of the company and took it for themselves. The Sacklers have directed Purdue to pay their family as much as $13 billion."

The deal's critics see Monday's revelation as a new arrow in their quiver, further evidence that the settlement lets the Sacklers off easy.

"The fact that the Sackler family removed more than $10 billion when Purdue's OxyContin was directly causing countless addictions, hundreds of thousands of deaths, and tearing apart millions of families is further reason that we must see detailed financial records showing how much the Sacklers profited from the nation's deadly opioid epidemic," Letitia James, attorney general of New York and one of the agreement's loudest critics, said in a statement Monday.

"We need full transparency into their total assets and must know whether they sheltered them in an effort to protect against creditors and victims," she said.

The Sacklers, for their part, have consistently denied any wrongdoing.

Along with their $3 billion offer, they promised to give up control of Purdue Pharma. And in a controversial gesture, they have also asked the court to extend the lawsuit protection offered to companies during bankruptcy to the family itself — a move that would shelter their remaining personal wealth from litigation. 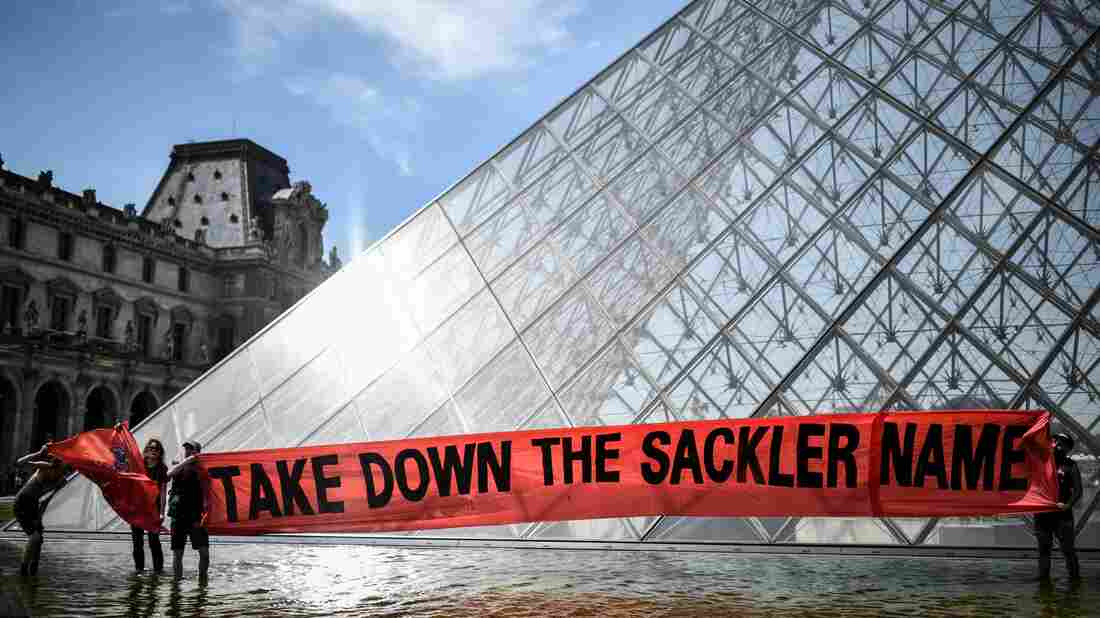 Activists raise a banner reading "Take down the Sackler name" during a demonstration earlier this year in front of the Louvre Pyramid in Paris. Stephane de Sakutin/AFP via Getty Images hide caption 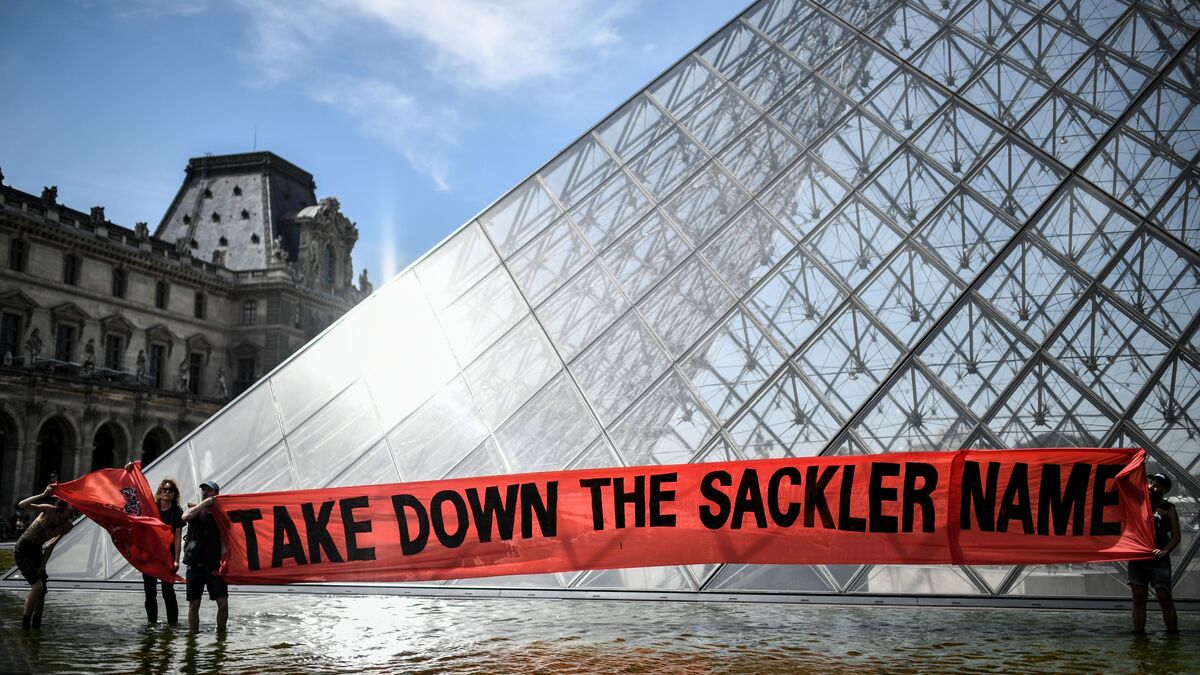 Activists raise a banner reading "Take down the Sackler name" during a demonstration earlier this year in front of the Louvre Pyramid in Paris.

Purdue is just one of a number of drugmakers, distributors and pharmacies that have found themselves the target of lawsuits around the U.S. They include Johnson & Johnson, Teva Pharmaceuticals and the nation's three biggest distributors: McKesson, Cardinal Health and AmerisourceBergen, among others.

But as of yet, Purdue is the only major opioid producer to seek bankruptcy. The others have sought to carry on despite their legal woes, either fighting the lawsuits in court or striking pretrial deals.

Until now, authorities have largely held off on pursuing criminal charges against the companies and their executives — though subpoenas issued earlier this year to manufacturers and distributors by federal prosecutors suggest that such charges are possible.

For the Sacklers, the pushback for their role in the opioid crisis has not been confined to the courtroom.

The family's ample philanthropic donations, particularly in support of education and the arts, have placed the Sackler name on schools and museums around the world. Lately, though, activists have been pushing those institutions to drop it. Protesters have showed up at museums and galleries from New York City to Paris, demanding the honors for the Sacklers be revoked.

Tufts University announced earlier this month that it would be removing the Sackler name from its graduate school of biomedical sciences, in what the school's dean, Daniel Jay, described as a first among U.S. universities.

"Our students, faculty, staff, alumni, and others have shared with us the negative impact the Sackler name has on them each day, noting the human toll of the opioid epidemic in which members of the Sackler family and their company, Purdue Pharma, are associated," Tufts President Anthony Monaco and Board Chairman Peter Dolan explained in a statement on Dec. 5.

"It is clear that the Sackler name, with its link to the current health crisis, runs counter to the school's mission."