Accessibility links
Court Imposes Death Sentence For Gen. Musharraf, And Pakistan's Army Balks Defending the former leader, a military spokesperson says that someone who "served the country for over 40 years, fought wars for the defense of the country can surely never be a traitor." 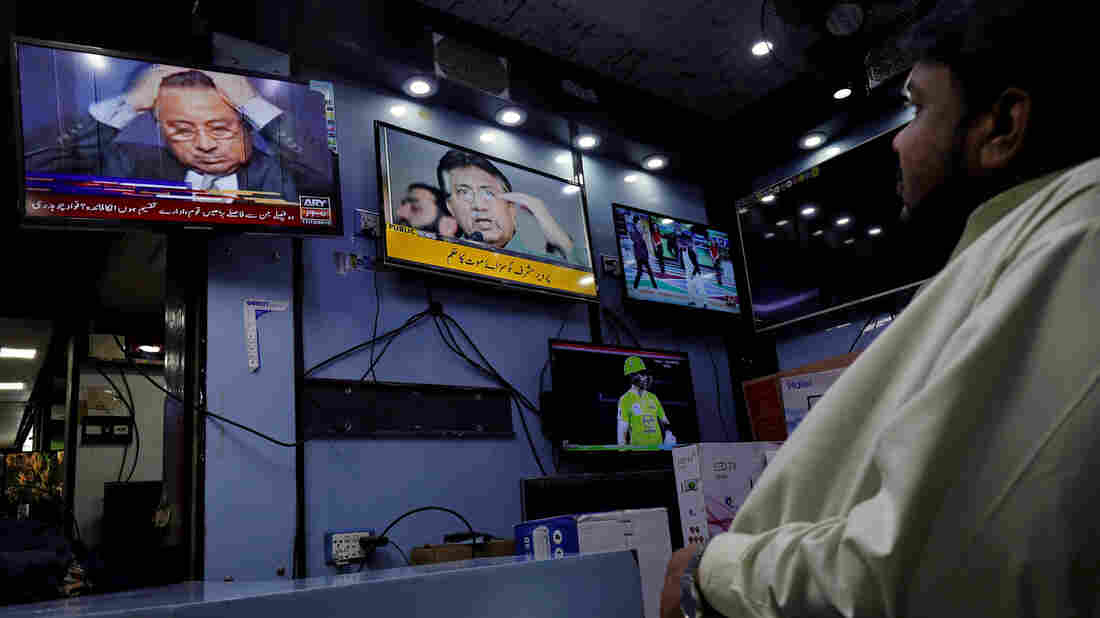 A Pakistani court sentenced former military ruler Pervez Musharraf to death Tuesday, on charges of high treason and subverting the constitution. Here, a shopkeeper watches TV coverage of the news at a shop in Karachi. Akhtar Soomro/Reuters hide caption 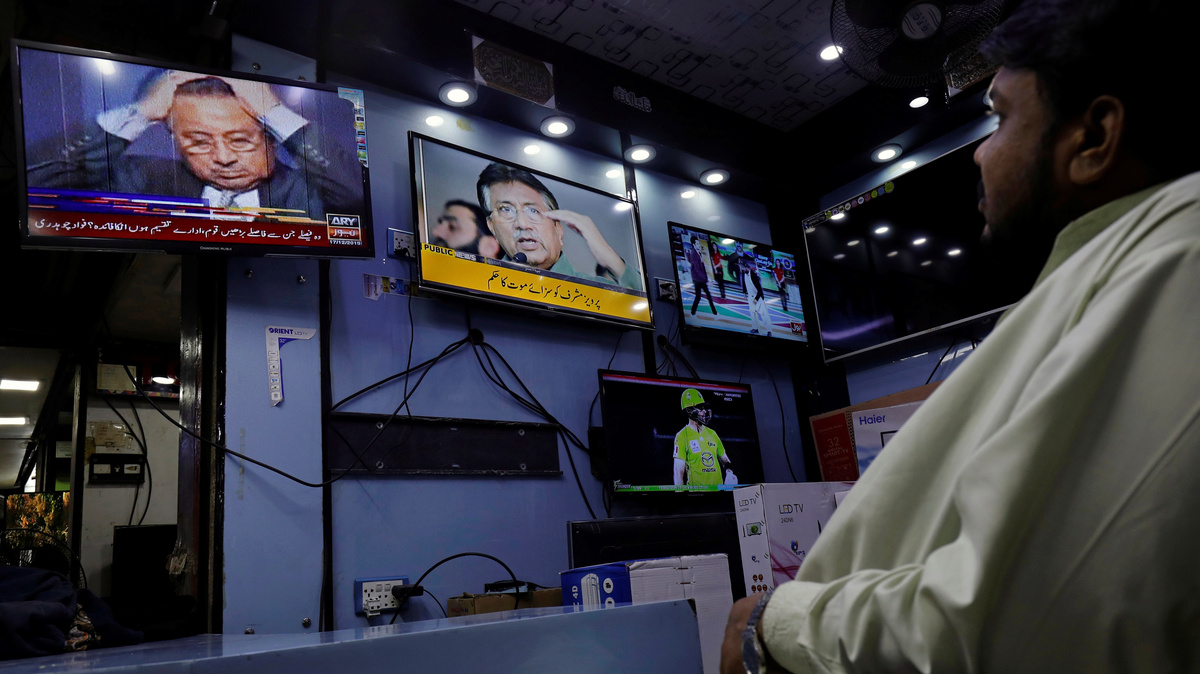 A Pakistani court sentenced former military ruler Pervez Musharraf to death Tuesday, on charges of high treason and subverting the constitution. Here, a shopkeeper watches TV coverage of the news at a shop in Karachi.

A special court in Pakistan has sentenced Gen. Pervez Musharraf — the country's former military leader — to death for high treason. It's an unprecedented move in Pakistan, a country long dominated by its armed forces.

In a 2-1 ruling, a special court said Musharraf, 76, had committed high treason by suspending the constitution and imposing a state of emergency in 2007. The court issued a short verdict and said it would release its longer ruling within the next two days.

The sentence against Musharraf deals a "blow to the military's image, more than that, its prestige and its unquestioned unequal authority," says political analyst Ammara Durrani.

"This is the first time the honorable judiciary has tried and sentenced an army officer of the highest designation, who has held the office of head of state, and awarded him a death sentence," Durrani says. "So the enormity of this verdict is historic. It's huge."

The punishment isn't likely to be carried out: Musharraf was tried in absentia because he now lives in Dubai, United Arab Emirates. The political party Musharraf formed has also vowed to appeal the ruling, local media report.

Pakistan's military is sharply criticizing the ruling, saying it has caused a "lot of pain and anguish" in its ranks.

"Due legal process seems to have been ignored," says Armed Forces spokesperson Maj. Gen. Asif Ghafoor, after the court issued a death sentence to the former army chief. In a statement released via Twitter, Ghafoor adds that someone who "served the country for over 40 years, fought wars for the defense of the country can surely never be a traitor."

Musharraf, who has said he's too ill to travel to Pakistan, did not immediately issue a reaction to the death sentence — other than to retweet the military's statement. He has previously rejected the charges against him.

The court's verdict was delayed after a last-minute intervention by the current government led by Prime Minister Imran Khan, who is seen as close to the military. Several of his top officials also served under Musharraf.

The decision damages the military's prestige, says Omar Waraich, a political analyst who is also the deputy South Asia director for Amnesty International. "It sends a message and says: you will be held accountable if you try and overthrow the government," Waraich says. "So it matters less whether Musharraf gets punished. And it matters more how the precedent is set for his successors in the army."

Musharraf rose to power in 1999, when he ousted Prime Minister Nawaz Sharif in a coup. During his rule, Musharraf also imposed a state of emergency in Pakistan, putting several key judges under house arrest during a purge in 2007.

Sharif later returned to office, triggering the treason charges against Musharraf — but the general was allowed to leave Pakistan in 2016 to seek medical treatment.

The Musharraf sentence is the latest phase of a decades-old struggle between Pakistan's military and civilian institutions. Since the country was created in the aftermath of World War II, four generals have ruled Pakistan for about half of its existence, wresting control from civilian governments. Even when not in power, the military is widely seen to have manipulated election results. And it's accused of influencing the most recent election, which put Khan in power last year.

Pakistani journalists say they are pressured not to criticize the military, despite the country enjoying an unprecedented three consecutive civilian governments in a row.

"Despite ostensible strengthening of democracy, the army is perceived as a sacred cow," Durrani says.

But in recent years, the judiciary has been asserting its own power, intervening against both the government and the military. It has ousted two prime ministers – including Sharif in 2017. And last month, the judiciary cancelled the three-year tenure extension of the army chief, Gen. Qamar Javed Bajwa.

"They are saying we are independent," Waraich says of the judiciary. "We're not going to take out orders from the military or from the government."