Accessibility links
New Research Identifies Possible Mass Graves From 1921 Tulsa Race Massacre "I'm as confident as I can be in the results that this is a very big candidate for something associated with the massacre," a senior researcher at the Oklahoma Archeological Survey said on Monday. 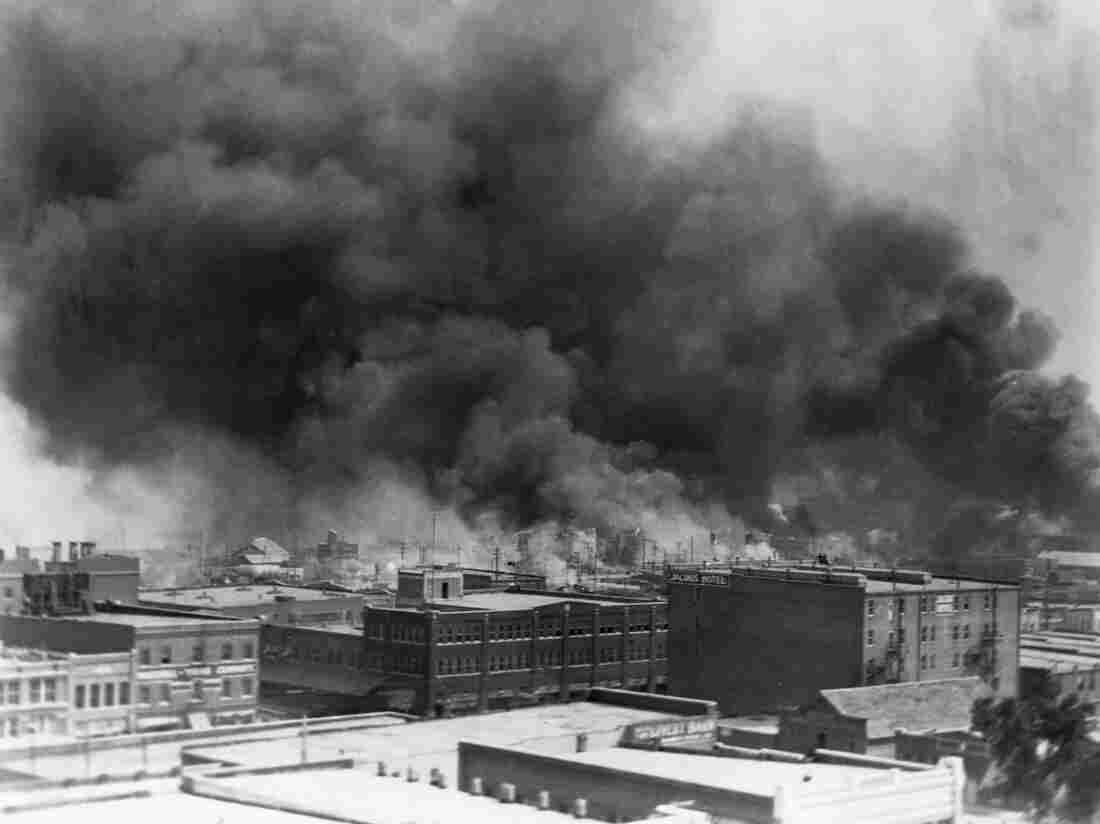 Black smoke billows from fires in the Greenwood district of Tulsa, Okla., during the 1921 Race Massacre. Corbis via Getty Images hide caption 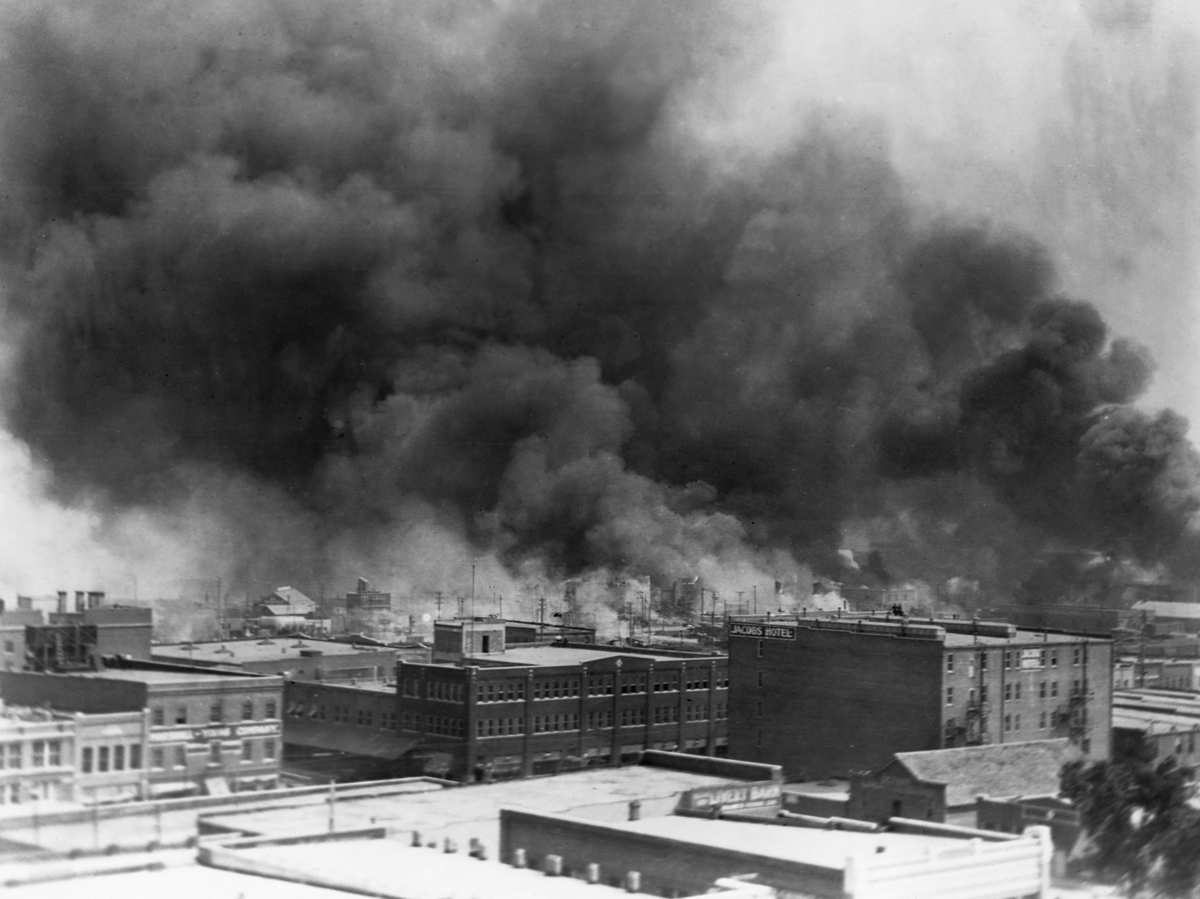 Black smoke billows from fires in the Greenwood district of Tulsa, Okla., during the 1921 Race Massacre.

For decades, historians poring over photographs, written records and oral interviews have suspected where victims may have been buried after the Tulsa Race Massacre of 1921. And on Monday night, researchers announced there is new evidence that supports those suspicions.

After studying four identified sites using ground-penetrating radar, scientists led by the State of Oklahoma Archaeological Survey confirmed they discovered "anomalies" indicating what may be at least two mass burials.

"I'm as confident as I can be in the results that this is a very big candidate for something associated with the massacre," said Scott Hammerstedt, senior researcher at the Oklahoma Archaeological Survey said at a public forum on Monday.

One of the newly discovered pits is in a section of Tulsa's Oaklawn Cemetery. It measures roughly 30 feet by 25 feet, which researchers said is large enough for up to 100 bodies.

The second possible mass grave is in an area called The Canes. It is a small piece of land near the Arkansas River, covered in overgrown vegetation.

Tulsa Mayor G.T. Bynum said the second phase of the investigation will continue next year, but next steps need to be approved by the 1921 Mass Graves Investigation Public Oversight Committee. That includes further geophysical surveys and efforts to excavate the sites.

It is still unclear how many people were killed in the 1921 Race Massacre, also known as the 1921 Tulsa Race Riot.

"My own belief is that a reasonable number can go as high as 300," Scott Ellsworth, a University of Michigan historian said, adding that others believe it can be "many, many, many more people were killed."

But to date, the Tulsa Race Riot Commission — made up of descendants of the tragedy as well as historians — has confirmed and identified only 35 African American individuals who were killed.

Ellsworth said that all of the victims whose remains the groups have been searching for are homicide victims.

He added that all but one of the victims were interred by strangers in burials that were controlled by the white authorities of the time. Nearly all took place during a period of martial law that was declared in Tulsa following the riot and lasted a few days. That means the family members of the deceased were held under armed guard, away from their dead mothers, fathers, sons and daughters.

"They did not know that their loved ones were dead. Or they did not know what was happening to them," Ellsworth said. The authorities never told them where the bodies were ultimately buried; there were never any funerals. There were no goodbyes from family members and no preachers offering prayers or words of comfort. 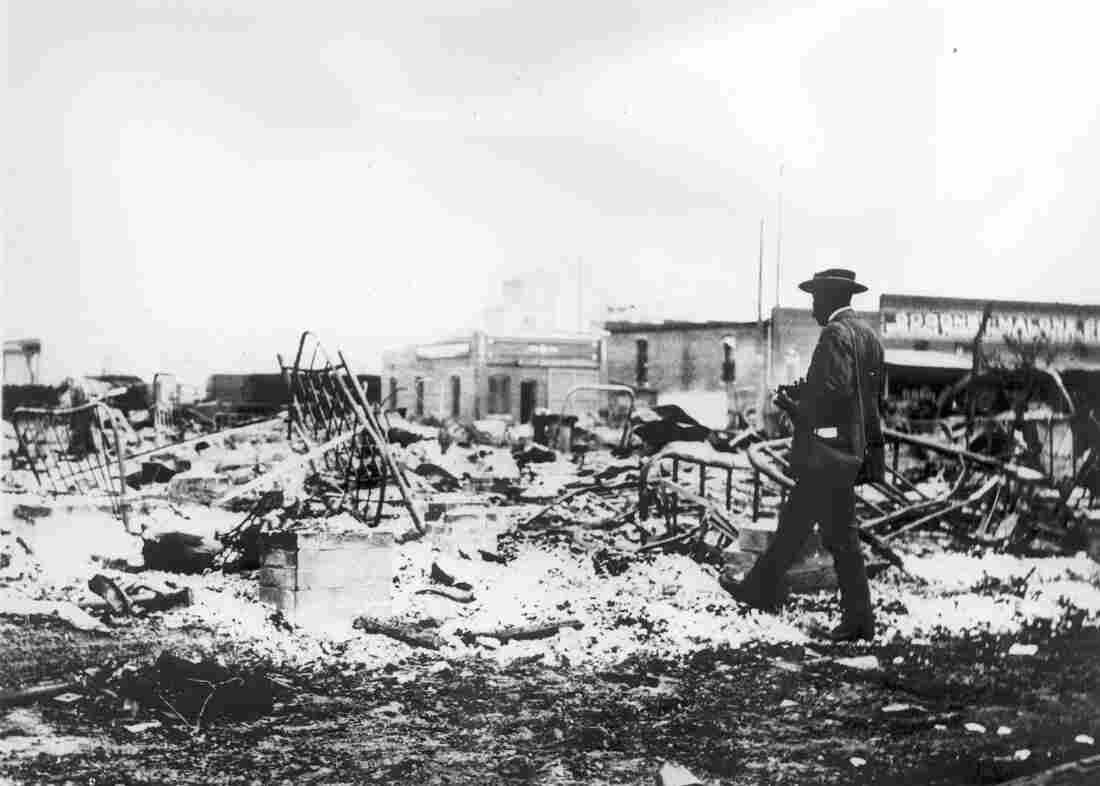 Photograph of an African-American man with a camera looking at the skeletons of iron beds which rise above the ashes of a burned-out block after the 1921 Tulsa Race Massacre, in Oklahoma. Oklahoma Historical Society/Getty Images hide caption 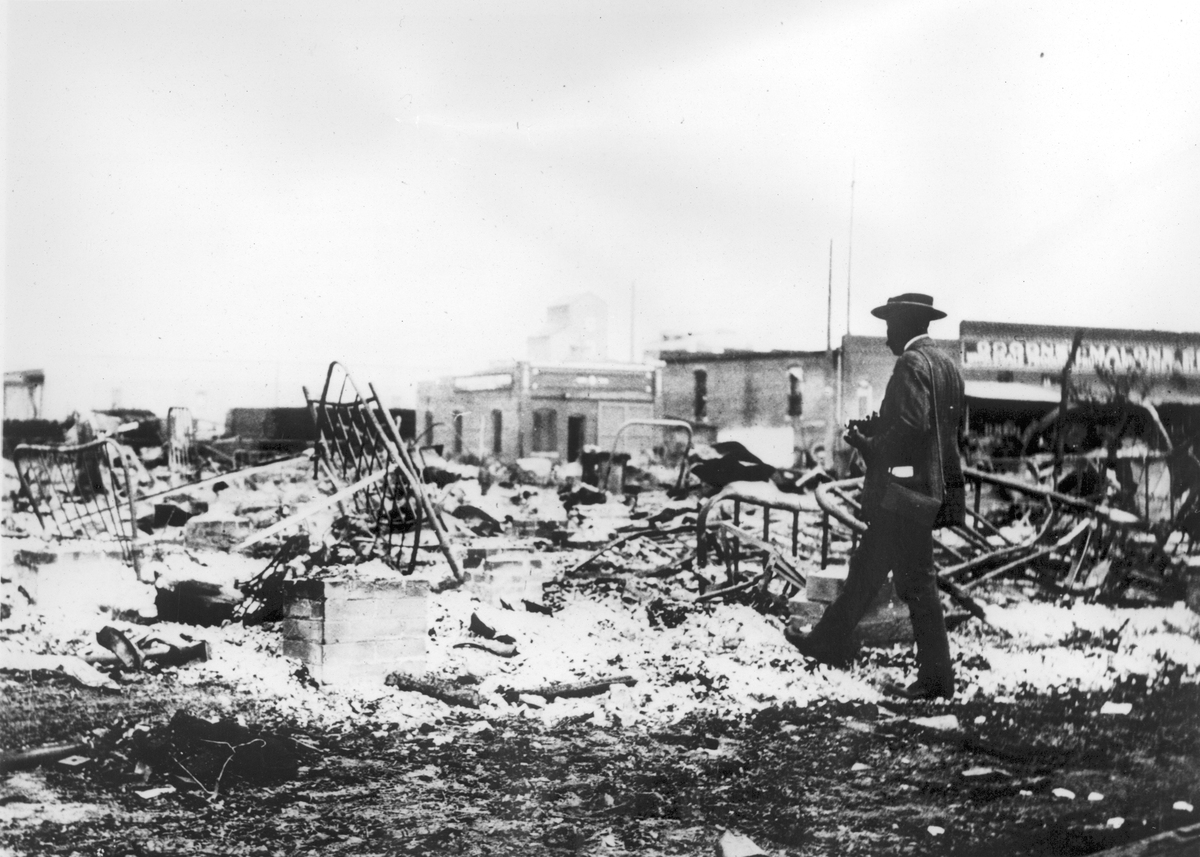 Photograph of an African-American man with a camera looking at the skeletons of iron beds which rise above the ashes of a burned-out block after the 1921 Tulsa Race Massacre, in Oklahoma.

Historian Hannibal Johnson, author of several books about the massacre, told NPR that the furor in Tulsa came after a spate of race riots that swept across the county in 1919.

There was jealousy of the success of the black community by white residents, Johnson said. Land lust fueled a desire by industrialists and railroad companies to take over valuable black-owned properties in Greenwood. And the Ku Klux Klan had established a strong foothold in the community.

Historic accounts trace the spark of the riot to an incident between a young black man and a white woman in a downtown elevator. Johnson said the man, who worked as a shoe shiner and was in the elevator on his way to the restroom, was accused of raping the woman, who worked as an elevator operator.

"But really, there must have been a bump or something as the elevator was going up and he grabbed onto her," Johnson said. She apparently let out a scream and he ran out of the elevator when the doors opened. The story was picked up by The Tulsa Tribune, which Johnson said was stoking already tense race relations in the city.

In the end, the woman refused to cooperate with prosecutors after charges were filed, saying the accusation mischaracterized what happened. But it was too late. Large crowds of white residents gathered at the courthouse, demanding that the man be lynched. On May 31, 1921, on the steps of the courthouse an altercation broke out between a white man with a gun and a black supporter of the accused man. They struggled over the firearm and the white man was shot, Johnson explained.

That set off hours of violence and destruction that decimated the Greenwood district of Tulsa, where black residents lived under Jim Crow segregation.

The area was a prosperous black community, spanning 35 square blocks. It was thriving with black-owned businesses, including theaters, dance halls, barber shops, haberdasheries, grocery stores, and doctors and lawyers offices. About 10,000 angry and armed white residents stormed into the district.

"Members of the white mob had looted pawn shops and sporting goods stores for guns to take with them as they flooded into Greenwood," Johnson said. "White mobs prevented firefighters from stopping fires and some eyewitnesses say planes dropped bombs and strafed the community with gunfire."

One local paper printed the following story a day after the decimation began:

"With the coming of dawn this morning, following a night of race rioting and deaths, hundreds of armed white men in motor cars formed a circle of steel about 'Little Africa,' and a continuous rattle of rifle and revolver fire could be heard."

Johnson said conservative estimates of the damage were between $1.5 million and $2 million at the time, which would be well over $25 million in today's dollars.

The incident and many of its horrors were recreated in the debut episode of HBO's Watchmen in October. Johnson called the depiction "well done and provocative."

He's glad that the massacre is getting more attention. Johnson said there's been a "conspiracy of silence" around the horrific events.

Phoebe Stubblefield, a forensic anthropologist from the University of Florida who sits on the committee, noted the panel does not want any exhumed bodies to remain unburied for years.

"We want them to be reinterred respectfully and not in a museum somewhere on a shelf," Stubblefield said.