Accessibility links
With 'Nothing Fancy,' Alison Roman Aims To Rebrand Having People Over For Dinner In her new cookbook, Nothing Fancy, Alison Roman is rebranding how we think of having people over for dinner. You don't have to prepare a picture perfect moment to share a good meal with friends. 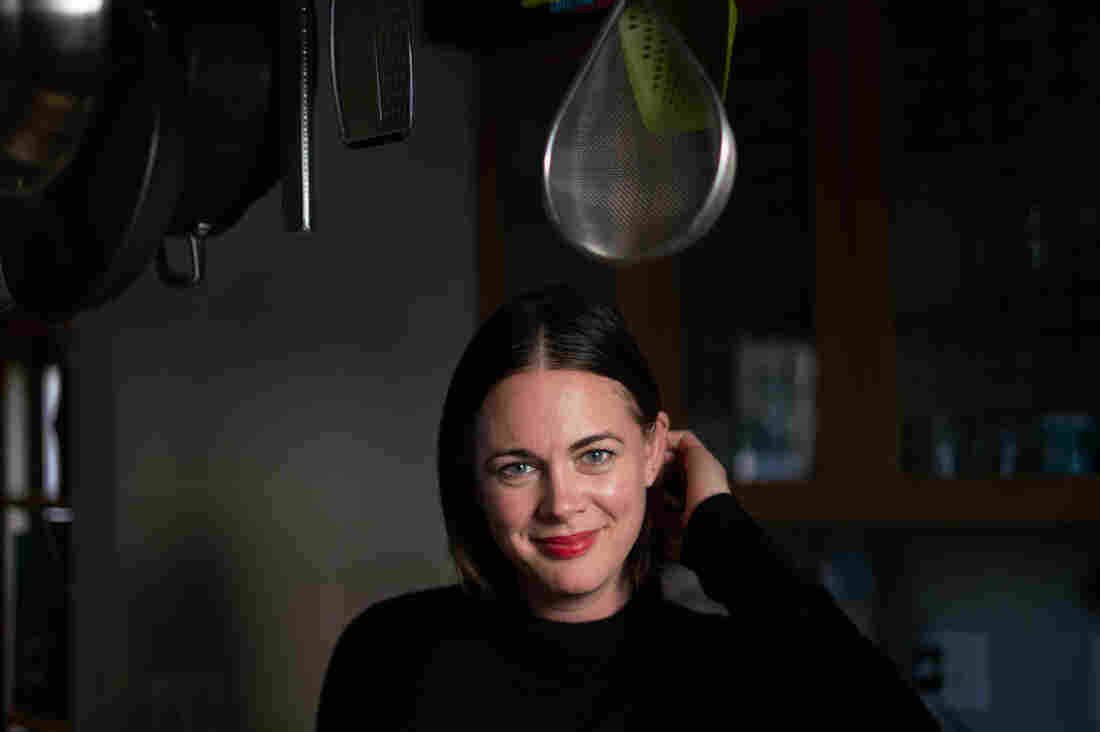 Alison Roman stresses that preparing dinner for others doesn't have to be a piece of performance art. Claire Harbage/NPR hide caption 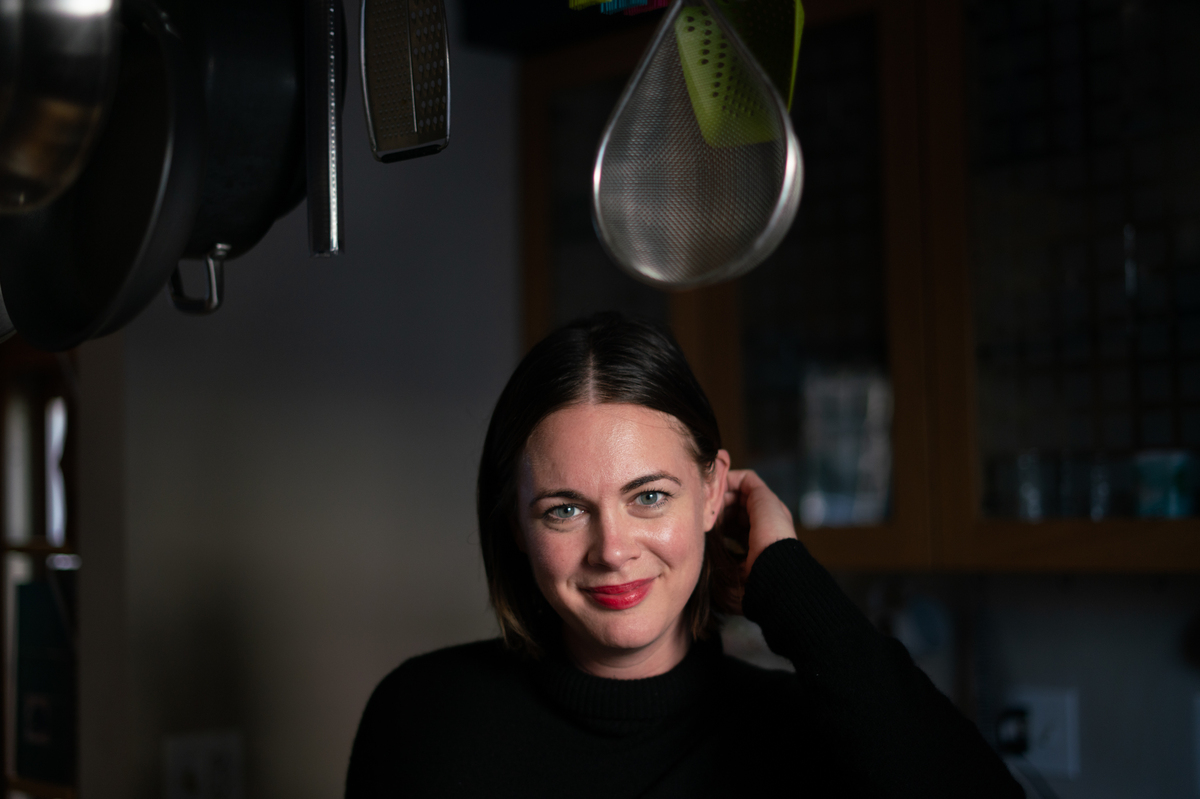 Alison Roman stresses that preparing dinner for others doesn't have to be a piece of performance art.

Dinner parties often come with expectations and stress, but author Alison Roman wants you to know it doesn't have to be that way.

"I feel like taking the word entertaining out of something just immediately alleviates anxiety, because what I realized is also when you rebrand it as having people over, it not only makes you feel less anxious, but your guests, [too]," Roman says.

People also have to realize that you don't need a special occasion to have friends over for dinner, says Roman, and that you don't need to entertain your guests with matching dinnerware or by getting rid of the stacks of books and other things that make your home cozy.

"I think that increasingly in our world, where, you know, I hate to bring up the word, but Instagram is like the metric by which we judge ourselves both aesthetically, and ... I feel like from what we wear to what our homes look like, to how our food should be, we're holding ourselves to these really insane standards, and I feel like they're not rooted in reality," Roman says.

"I wanted this book to kind of serve as a reality check of ... it's gonna be OK," she says. "It's fine no matter what happens. Just having the people in your home and like opening a bottle of wine and roasting a chicken — that's great. That's all you need."

Roman prepares food from her cookbook Nothing Fancy, she measures out spices, peels garlic, and tosses squash on a pan mid-roasting. Claire Harbage/NPR hide caption

Roman prepares food from her cookbook Nothing Fancy, she measures out spices, peels garlic, and tosses squash on a pan mid-roasting.

Whether she's getting ready to have people over on a Sunday night or preparing for a holiday such as Thanksgiving, Roman says she usually breaks down the menu in the same way. She starts with snacks, then moves to a salad, then sides, a main dish and then something sweet tops it off.

"You don't have to have all five things to make a great meal," she says. "For me, I'm more likely to create an entire meal out of all side dishes than anything else. And I've done that quite a few times."

Together with NPR's Ailsa Chang, Roman made Roasted Squash with Yogurt and Spiced, Buttered Pistachios and Frizzled Chickpeas and Onions with Feta and Oregano — two side dishes from Nothing Fancy that both can be made within an hour.

"If I'm doing this for a party or for anything really, I always think 'OK, what's going to take the longest?' and let's do that first," Roman says. "The squash, because it's inactive time. We're gonna cut it. We're gonna roast it. I don't need to pay attention to it while it's in the oven, so I can get that going now and then take care of everything else."

Roman stirs the chickpeas as they cook from the recipe Frizzled Chickpeas and Onions with Feta and Oregano, scoops chopped pistachios onto a knife, and a holds half lemon to be squeezed into yogurt. Claire Harbage/NPR hide caption

Roman stirs the chickpeas as they cook from the recipe Frizzled Chickpeas and Onions with Feta and Oregano, scoops chopped pistachios onto a knife, and a holds half lemon to be squeezed into yogurt.

Roman says just starting the process immediately helps everyone relax. At the worst, you'll at least have one dish to eat. As she's continued her cooking career, Roman has learned a few other tips that make having people over easier and fall in line with her philosophy that it's not entertaining.

"In my old age, I have learned to ask for help because it makes my life easier," she says. "I become less frazzled."

Just having someone open a can of chickpeas or taking the leaves off the oregano can take the pressure off, get everyone involved in the process and set the tone for a more relaxed evening. There's no need to prepare the entire dinner alone.

Roman plates the squash from the recipe Roasted Squash with Yogurt and Spiced, Buttered Pistachios, browns butter, and crumbles feta onto the chickpeas.

Below you'll find the recipes from Nothing Fancy, as well as recipes from chefs around the U.S. that can be made ahead and taken to holiday get-togethers with friends or family.

Remove the seeds from the squash if you want (I leave them in, as I enjoy their crunchy texture as they roast, but whatever you like!) and toss the squash on a rimmed baking sheet with the olive oil. Season with salt and pepper, and roast until the squash is totally tender and golden brown with caramelized bits, 40 to 50 minutes.

Meanwhile, melt the butter in a small pot over medium heat. Cook, swirling occasionally, until the butter has browned and started to foam, 3 to 5 minutes. Remove from the heat and add the pistachios, cumin, turmeric, cinnamon, and red pepper flakes, if using. Season with flaky salt and set aside.

Combine the yogurt and lemon juice in a small bowl and season with salt. Spoon the yogurt sauce onto the bottom of a large serving platter or bowl. Arrange squash nestled into each other and spoon the buttered pistachios over everything. Top with flaky salt and a grind of black pepper or a pinch of red pepper flakes.

DO AHEAD: Squash can be roasted several hours ahead of time, wrapped loosely, and stored at room temperature. It doesn't need to be reheated before serving, but you can if you like.

NOTE: Most winter squash works here, but my favorites are the larger, thick-skinned varieties such as Red Kuri, kabocha, and acorn, because you can eat the skin (and the seeds!). If using something like a butternut or honey nut, slice it into 1-inch-thick slices rather than wedges.

Frizzled Chickpeas and Onions with Feta and Oregano

4 sprigs fresh marjoram or oregano, plus more leaves for garnish

Heat the olive oil in a large skillet over medium-high heat. Add the onion and season with salt and pepper. Cook, stirring occasionally, until the onion has softened, and is just starting to brown, 5 to 8 minutes.

Add the chickpeas, garlic, red pepper flakes, and half the marjoram leaves. Season with salt and pepper and toss to coat in the oily business. Continue to cook, shaking the skillet occasionally to make sure nothing is sticking and that the chickpeas are getting equal attention from the oil and heat, until the chickpeas are golden brown and appear fried around the edges and the onion is a deep golden brown and looks somewhere between fried and caramelized, a term we now call "frizzled."

Taste a chickpea or two and make sure it's plenty seasoned, adding salt, pepper, and/or a pinch of red pepper flakes, if you like things on the spicier side.

Remove from the heat and transfer to a large serving bowl. Top with the feta and remaining marjoram.

DO AHEAD: Chickpeas can be made a few hours ahead, kept covered loosely at room temperature. Feel free to reheat in a skillet over medium-high heat before serving, as they'll lose a bit of their crispness as they sit.

From Anthony Lamas, chef of Seviche in Louisville, Ky.

16 tablespoons unsalted butter, plus more for the pan

In a large bowl, whisk the eggs and cream. In a small bowl, combine the flour, sugar, salt, white pepper, and baking powder. Gradually add the flour mixture to the egg mixture, whisking until smooth. Set aside.

In a large skillet over medium heat, melt the 16 tablespoons butter. When the foaming subsides, add the onions and cook on medium heat, stirring occasionally, until they are caramelized, about 30 minutes. Move the pan off the heat and fold the onions into the egg mixture. Pour the mixture in the prepared baking dish and bake for 30 minutes, or until the pudding is set and the top is slightly brown. (Check with a toothpick inserted in the center of the pudding; if it comes out clean, the pudding is done). Let sit for a few minutes before serving.

CHEF'S TIP: You can use Spanish onion or Texas Sweets when Vidalias are not in season. The pudding is still delicious, but with a slightly different flavor. Just add a bit more sugar to make up for the lack of sweetness in the onions.

From Mashama Bailey, executive chef and partner at The Grey in Savannah, Ga.

Heat stock or water on stove to a low simmer in a sauce pot. Do not reduce, just hold it hot and place it aside.

In a separate pot with a wide bottom heat olive oil over medium heat. Add celery, shallots and onion with a pinch of salt and sweat with no color.

Add Carolina Gold Rice Grits with another pinch of salt and stir to coat with oil and start to toast. This should take five minutes. Add, tomato paste, saffron and white wine and stir until wine is evaporated.

Stir in 2 cups of the hot stock. Cook at a simmer, stirring until stock is absorbed. When fully absorbed add another 2 cups and stir until the stock starts to evaporate and rice grits soften. Add another 2 cups and stir until all of it is incorporated. The rice grits should be 80% cooked through. Fold in your shrimp and the diced fish. Add butter or more olive oil, 2 teaspoons of salt and hold until ready to eat.

When ready to reheat and serve in a pot add the last 2 cups of stock and stir over low heat until the rice is loose and fully coated with your stock. Taste for salt and pepper. Stir with a large spoon in a warmed large bowl. Garnish with herbs.

From Genevieve Ko, cooking editor at the Los Angeles Times

Bring a large pot of water to a boil. Add 3 tablespoons salt, return to a boil, then add the French beans. Boil until just tender, about 5 minutes. Drain well, rinse under cold water until cool, then drain again.

While the beans cook, whisk the miso, vinegar, oil, honey and a pinch of salt in a large bowl until smooth. Add the beans and half the jalapeño and fold until evenly coated.

Transfer to a serving platter and garnish with the remaining jalapeño and sesame seeds.