Accessibility links
Impeachment Vote: Hours Of Fiery Speeches Lead To Approval Of 2 Articles Lawmakers took to the House floor in roughly six hours of debate Wednesday before passing two articles of impeachment against the president.

After Hours Of Fiery Speeches In Protest And Support, House Impeaches Trump

After Hours Of Fiery Speeches In Protest And Support, House Impeaches Trump 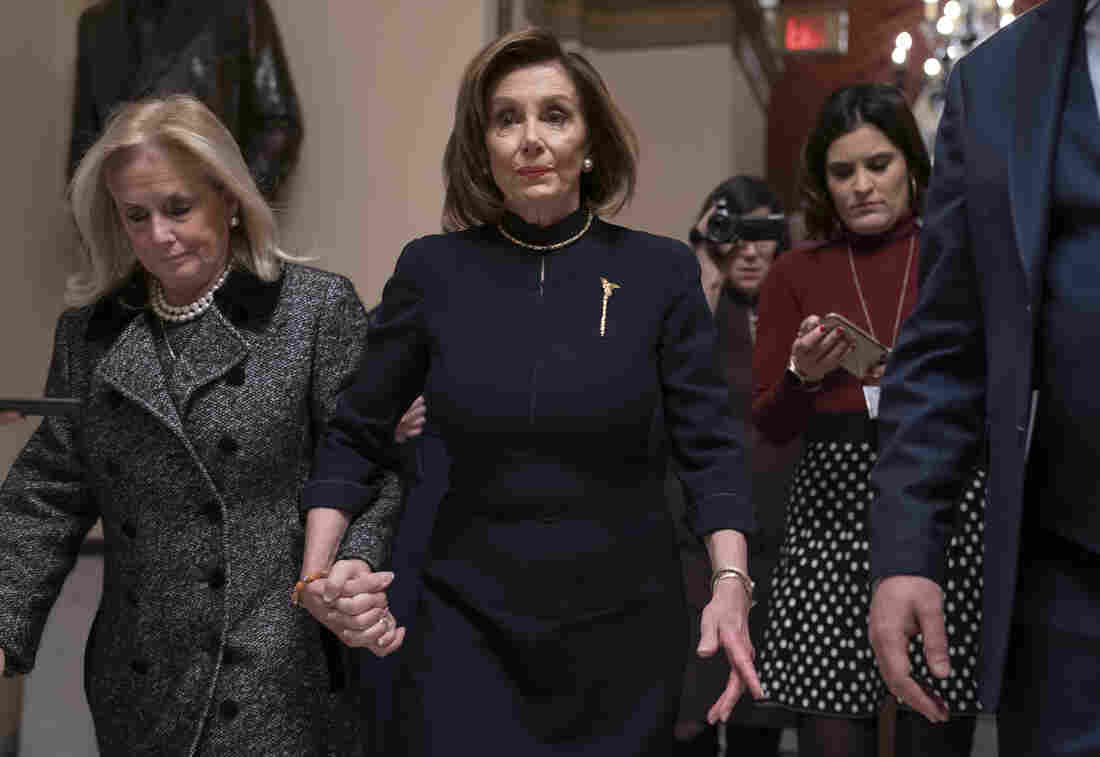 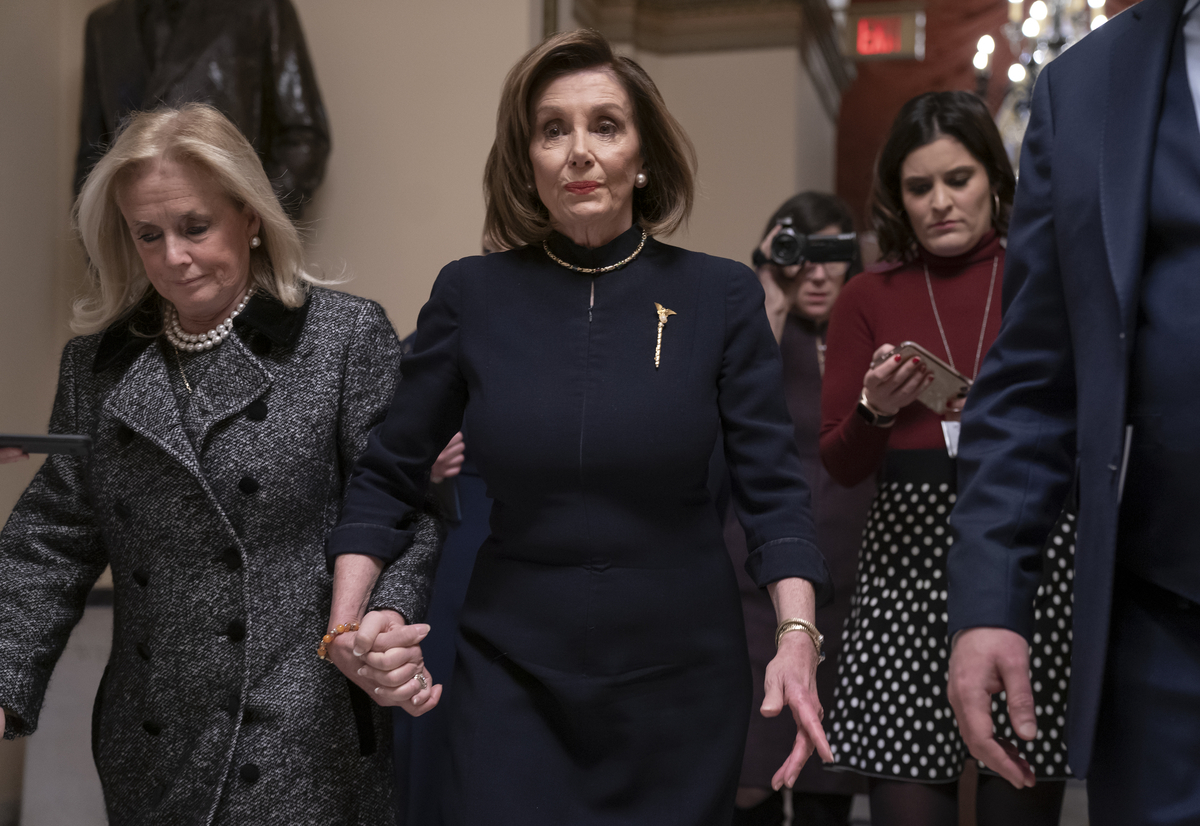 House Speaker Nancy Pelosi, D-Calif., holds hands with Rep. Debbie Dingell, D-Mich., as they walk to the chamber where the House begins debate on the impeachment charges against President Trump.

President Trump is now just the third president in American history to be impeached.

Lawmakers passed two articles of impeachment against Trump. The first article, which charges Trump with abuse of power, was approved largely along a party-line vote, 230-197-1. The second article, on obstructing Congress, passed 229-198-1.

Only two Democrats opposed the first impeachment article — Minnesota Rep. Collin Peterson and New Jersey Rep. Jeff Van Drew, who is expected to switch parties to the GOP this week. Maine Rep. Jared Golden voted for the first article but against the second one. Hawaii Rep. Tulsi Gabbard, who is seeking the Democratic nomination for president, voted present. No Republicans voted for either article, although Michigan Rep. Justin Amash, who left the GOP this year to become an independent because he supported impeachment, also voted for both articles.

The House spent six hours debating the articles throughout the day on Wednesday. The vote came just one day before the 21-year anniversary of the House voting to impeach President Bill Clinton in 1998.

Throughout the debate, Democrats framed the choice as one to protect the Constitution and democracy.

"If we do not act now," House Speaker Nancy Pelosi said in a speech on the floor, "we would be derelict in our duty." She added that the president "gave us no choice" and called Trump an "ongoing threat" to national security.

Pelosi and other Democratic women wore black to signify the solemnity of the occasion. But Rep. Doug Collins, R-Ga., disputed the idea of this being a somber moment for Democrats.

"This is not a solemn occasion," Collins said. "When you go looking for something for three years, and especially this year since January, you ought to be excited when you've found it."

Collins went on: "Why do we keep calling this a solemn occasion when you've been wanting to do this ever since the gentleman was elected?"

The president, apparently following the debate at the White House, tweeted (in all caps) that the "radical left" is putting forward "atrocious lies" and called the push for his impeachment "an assault on America, and an assault on the Republican Party!!!"

Wednesday morning, the House debated the rules on how to proceed and approved it on a mostly party-line vote, 228-197. There were just two Democratic defections — Peterson and Van Drew.

These same two opposed the House resolution formalizing the impeachment inquiry. Van Drew is planning to switch parties but has not officially announced when he will become a Republican. The lone independent, Amash, voted with Democrats.

The rules were determined by the House Rules Committee on Tuesday night. The morning session also saw some debate from members of Congress about Trump's impeachment.

"No one came to Congress to impeach a president," Rep. Ben Ray Luján, D-N.M., said on the House floor. But, he added, Trump's behavior "is so blatantly wrong that ignoring his abuses of power would be abdicating the oath we made to protect this country and uphold our Constitution." 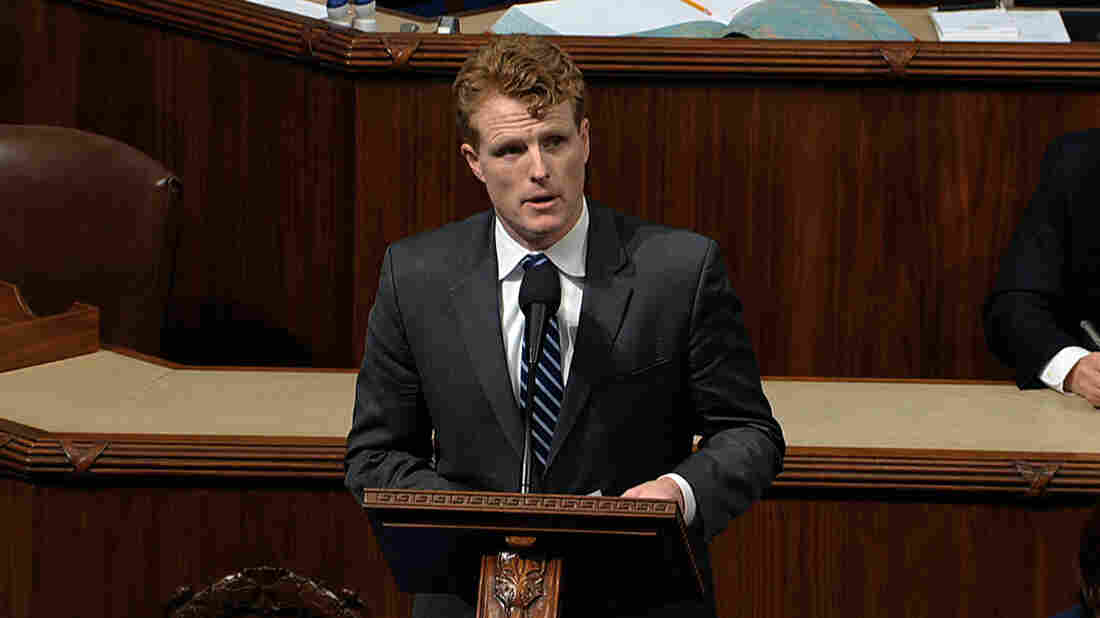 Rep. Joe Kennedy, D-Mass., speaks as the House of Representatives debates the articles of impeachment against President Trump on Wednesday. House Television via AP hide caption 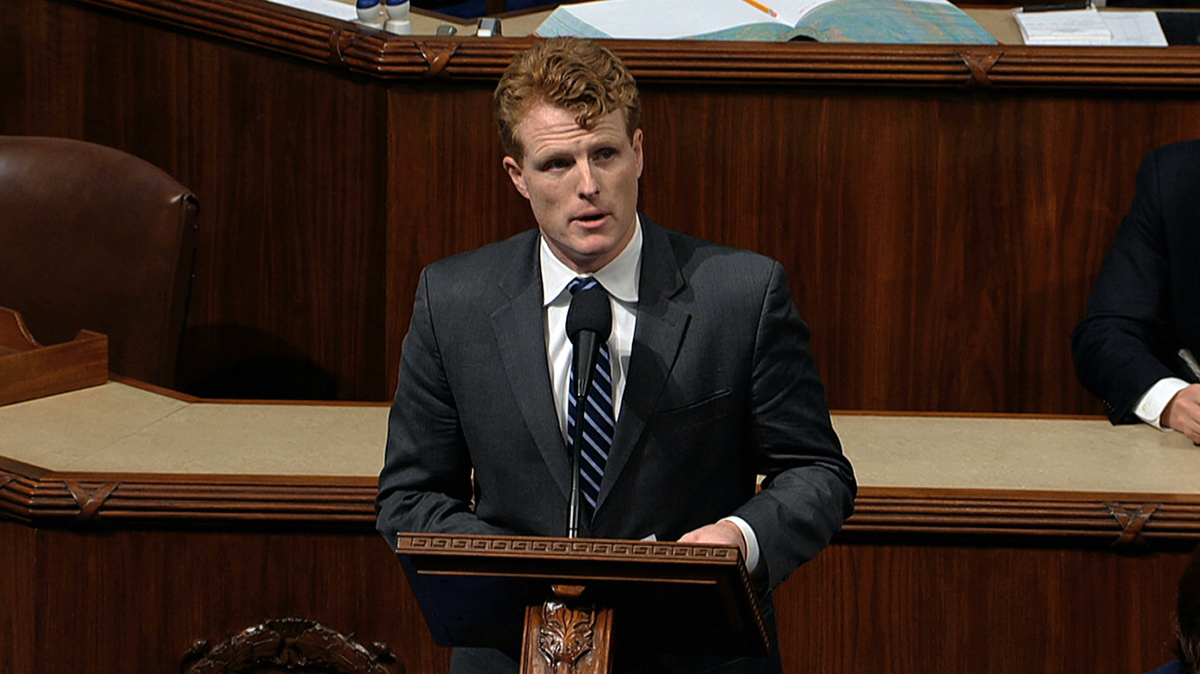 Rep. Joe Kennedy, D-Mass., speaks as the House of Representatives debates the articles of impeachment against President Trump on Wednesday.

Some members framed their votes as a legacy moment for their families.

Kennedy concluded, "I love you. Listen to Mom."

Rep. Barry Loudermilk, R-Ga., referenced Scripture. "When Jesus was falsely accused of treason, Pontius Pilate gave Jesus the opportunity to face his accusers," Loudermilk said. "During that sham trial, Pontius Pilate afforded more rights to Jesus than the Democrats have afforded this president in this process."

Other Republicans complained about the impeachment process and argued that the president has committed no crimes. There is "no proof, none" that the president committed an impeachable offense, said Rep. Debbie Lesko, R-Ariz. She charged that "Democrats are tearing this country apart; they're tearing families apart."

Rep. Tom Cole, R-Okla., argued that Democrats have long wanted to impeach Trump. "If we're really being honest," Cole said, "Democrats have been searching to impeach President Trump since the day he was elected."

One thing lawmakers from both sides of the aisle did agree on: It was a sad day.

"This is a sad day. It is not a day for joy," said Rep. John Lewis, D-Ga. "When you see something that is not right, not just, not fair, you have a moral obligation to say something, to do something."

"This is a sad day for America," agreed Rep. Bill Johnson, R-Ohio, before calling for a moment of silence to memorialize the 63 million Americans who voted for Trump.

The articles of impeachment were approved on a party-line vote last week by the House Judiciary Committee.

Republicans have remained solidly behind the president, while Democrats — who control the House — have run the process leading up to Wednesday.

Trump on Tuesday released a scorching letter to Pelosi in which he called the impeachment effort an "illegal, partisan attempted coup."

"You are unwilling and unable to accept the verdict issued at the ballot box during the great Election of 2016," he wrote. "So you have spent three straight years attempting to overturn the will of the American people and nullify their votes. You view democracy as your enemy!"

The president told reporters Tuesday that he takes "zero" responsibility for getting impeached.

Democrats charge that the president abused the power of his office "by ignoring national security and other vital national interests to obtain an improper personal political benefit," according to an impeachment report by House Democrats on the Judiciary Committee, released Sunday. It further charges that Trump "betrayed the nation by abusing his high office to enlist a foreign power in corrupting democratic elections."

As to the second article, obstruction of Congress, the Judiciary Committee majority charges that "no president has ever claimed the unilateral prerogative to categorically and indiscriminately deny a House impeachment inquiry" and that Trump's "direction to defy House subpoenas constituted an assault on the Impeachment Clause itself."

With the House having adopted the articles of impeachment, the next step is for leadership to name the impeachment managers for a Senate trial. That move could come as early as Wednesday night, but Pelosi will decide whom to tap and she has not signaled when she will do so.

In the Senate, meanwhile, White House staffers distributed Christmas cards from Trump as well as copies of his letter to Pelosi, according to Sen. Chris Murphy, D-Conn.

True story: there is a White House staffer going around the Senate delivering to each office, as a package, the incoherent, scathing Pelosi letter AND...wait for it...a giant 16x12 White House Christmas card (along with, implausibly, a second smaller Christmas card).

At a Senate trial, all 100 senators will act as jurors. Two-thirds, or 67 votes, would be needed to convict Trump, an outcome that is unlikely in the Republican-led Senate. In remarks to reporters on Tuesday, Senate Majority Leader Mitch McConnell, R-Ky., said he is not neutral on whether Trump should be removed from office.