Accessibility links
How U.S. Military Aid Has Helped Ukraine Since 2014 "U.S. military aid represents a physical manifestation of American support, which is essential," retired Lt. Gen. Ben Hodges tells NPR. The U.S. has given $1.5 billion in such aid in the past 5 years. 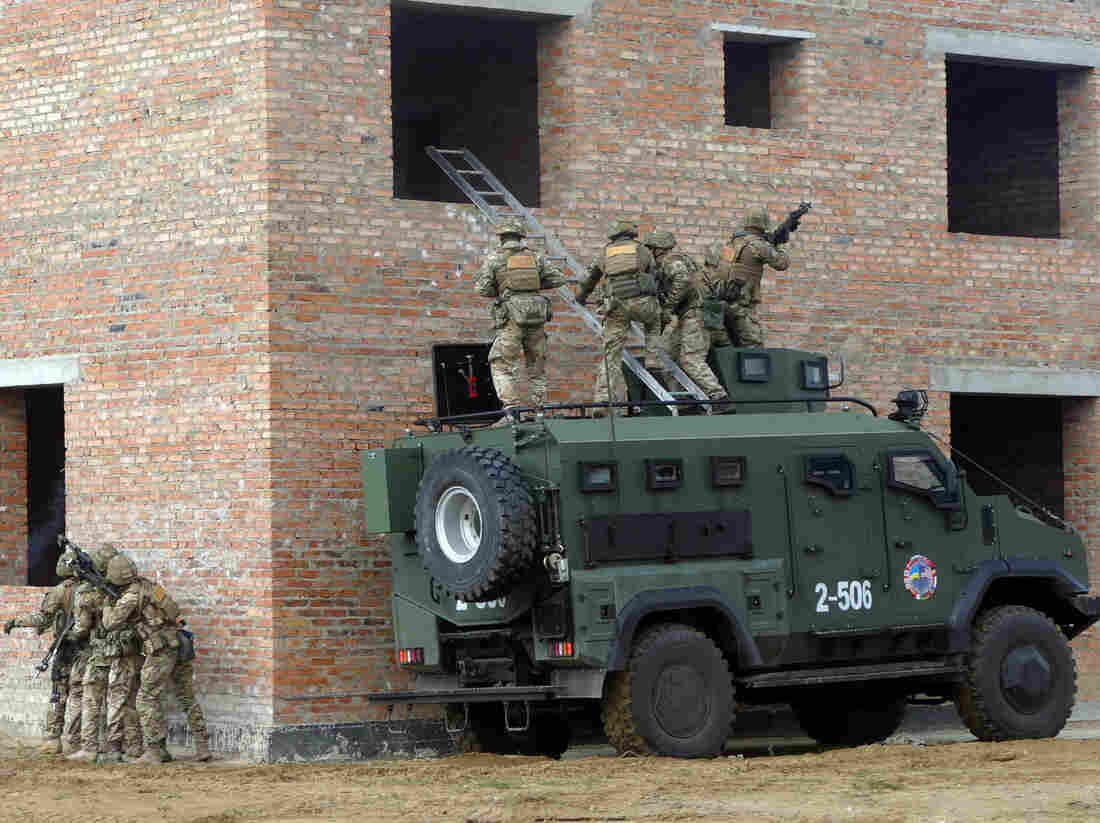 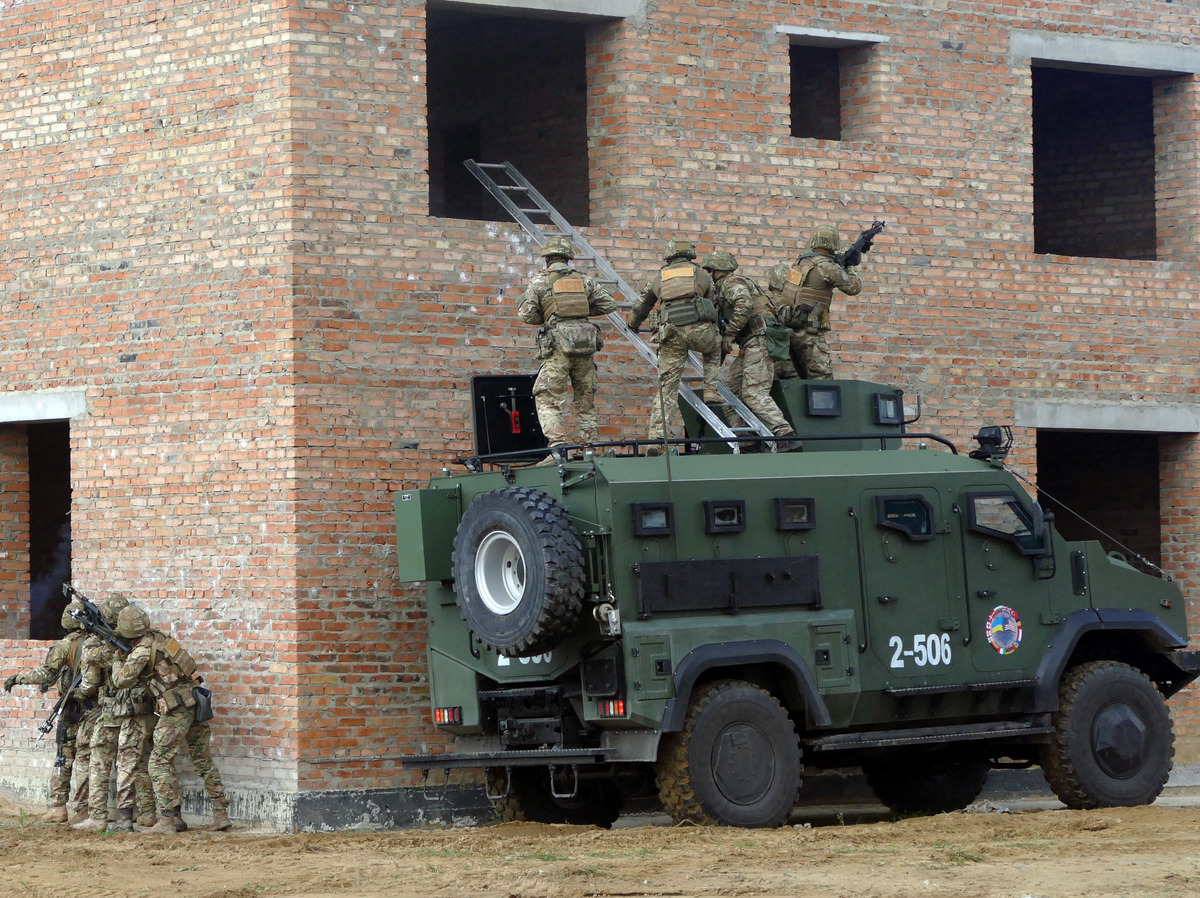 Soldiers storm a building during a drill held as part of the Exercise Rapid Trident 2019, an annual multinational training exercise near Yavoriv, Ukraine.

When he was still commander of the U.S. Army in Europe, Lt. Gen. Ben Hodges displayed a blue and yellow Ukrainian flag on his black backpack. The ribbon was a gift from an elderly woman who gave it to him during a joint military exercise in Ukraine.

The Hold On Ukraine Aid: A Timeline Emerges From Impeachment Probe

Hodges, now retired, oversaw the expansion of U.S. military cooperation with Ukraine after 2014, when Russia seized Crimea and backed an armed insurgency in eastern Ukraine that has cost more than 13,000 lives. Since then, the United States has provided $1.5 billion in security assistance, including everything from Humvees and patrol boats to counterartillery radar and lethal weaponry such as Javelin antitank missiles.

"First and foremost, U.S. military aid represents a physical manifestation of American support, which is essential," Hodges told NPR in an interview. "No. 2, the actual capabilities have provided help: The Javelins provided a deterrent effect; the counterfire radar has helped save lives because of the early warning it provided."

U.S. military assistance to Ukraine is at the heart of the impeachment inquiry. Democrats accuse President Trump of having withheld $391 million in aid to extract a political favor from Ukraine's new government, while Republicans counter he delayed it over concern about corruption.

The White House ended up releasing this year's aid package in September — after learning of a whistleblower complaint that Trump had made the assistance contingent on a Ukrainian investigation of former Vice President Joe Biden and his son Hunter Biden.

An extended delay in the aid would have sown doubt among Ukrainians and fed the Kremlin narrative that the U.S. is an untrustworthy partner, Hodges said.

U.S. assistance makes up 90% of Ukraine's foreign military aid, according to the Independent Defence Anti-Corruption Committee, a nongovernmental watchdog group in Kyiv.

"The Russians are watching all over the world who sells weapons to Ukraine, and so only big nations like the United States, who are not afraid of the Russians, can do it," said Olena Tregub, the group's head.

While she acknowledges that corruption has been a huge problem in Ukraine's defense sector, Tregub says that Ukraine's new government, led by President Volodymyr Zelenskiy, has confronted it head-on. 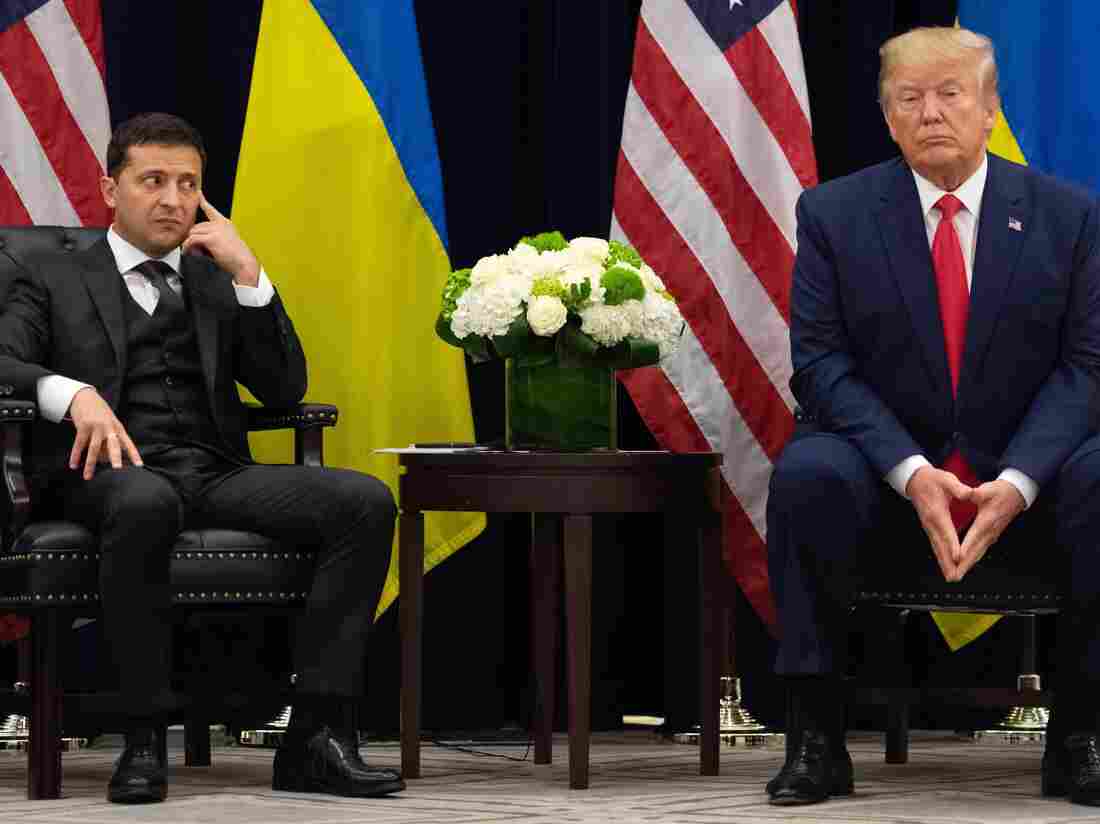 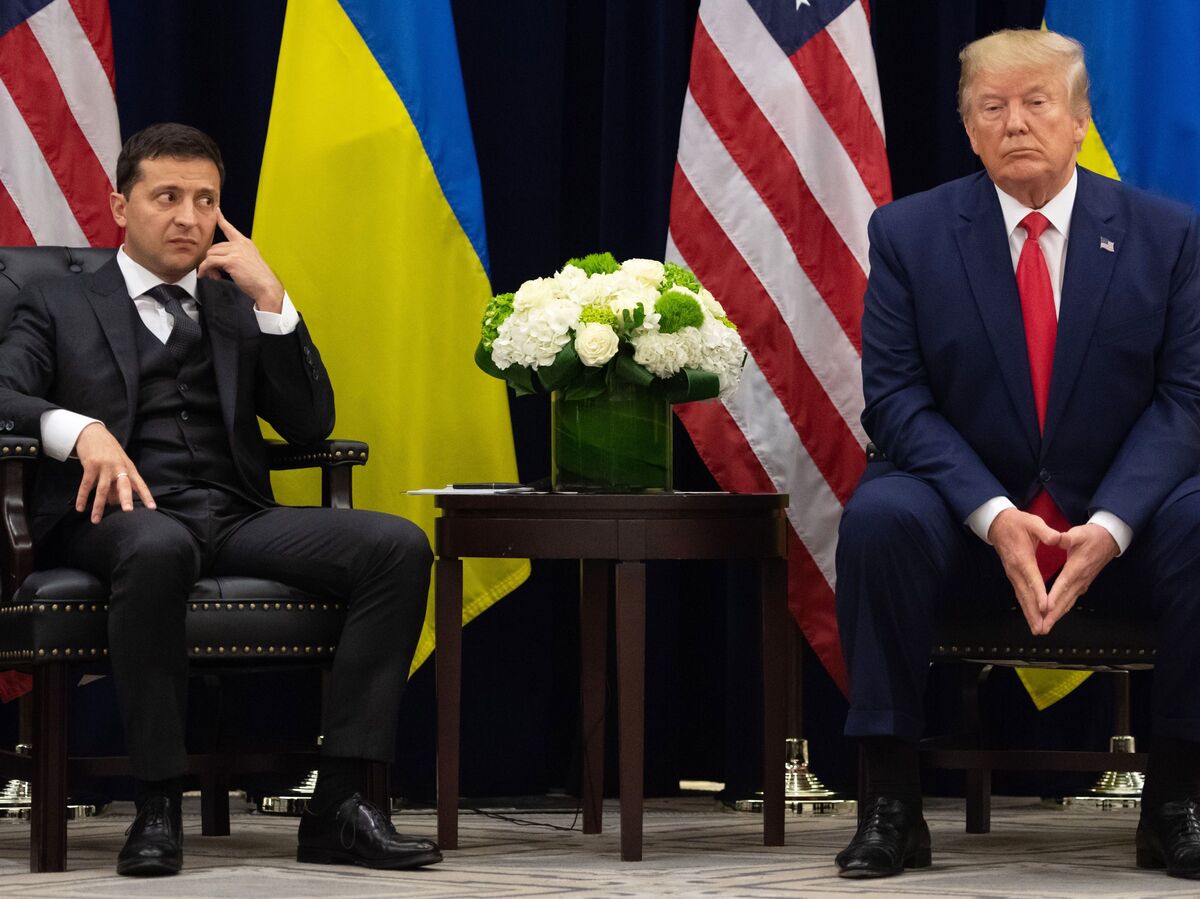 President Trump and Ukrainian President Volodymyr Zelenskiy met in September on the sidelines of the United Nations General Assembly.

"Trump can be happy because right now, Ukraine for real is fighting its defense sector corruption, which was an issue under the former president. But it did not concern security assistance. It was about looting money from the Ukrainian defense budget — Ukrainian money," she said.

A defense corruption scandal involving a close associate of former President Petro Poroshenko rocked Ukraine earlier this year and may have contributed to his election loss to Zelenskiy, a former professional comedian who promised to clean up the government.

In the past, 30% of each defense procurement deal was lost to corruption, Tregub says. New legislation, passed under Zelenskiy, requires more transparency, competition and accountability in defense contracts.

Still, corruption hasn't affected foreign military assistance, Tregub says. Instead, the problem with international aid has been Ukraine's difficulty in formulating its own defense needs due to secrecy and a lack of internal coordination.

In any case, the military aid from the United States does not reach Ukraine in cash, said Mykhailo Samus, the deputy director of the Center for Army, Conversion and Disarmament Studies in Kyiv.

"We never see this money. This is American money getting processed inside the U.S.," he said. "The Americans are buying goods and services in the U.S. and transferring them to Ukraine."

The Javelin antitank missiles, which the Trump administration shipped to Ukraine last year, are a powerful symbol of U.S. support. But they are in storage and far from the front line.

Samus says most of the U.S. military aid has gone to a joint training center in Yavoriv, near Ukraine's western border with Poland, more than 600 miles from the fighting. Just last month, 160 soldiers from the Wisconsin Army National Guard deployed to Yavoriv as part of a regular rotation of U.S. personnel.

Hodges, who helped set up the Yavoriv Combat Training Center, says that the U.S. has not only contributed to the Ukrainian war effort, but also benefited from the cooperation.

"We saw this as a great opportunity to learn because no Americans have been under Russian artillery or rocket fire or that kind of lethal environment with Russian capabilities. And so we were able to learn a lot from Ukrainian soldiers and officers," he said.

The lessons were so valuable that the U.S. Army changed its training model, Hodges said.

But Samus, the military analyst, says it's the Ukrainian army that has changed the most — thanks to help from the U.S. and other NATO countries like Canada, Britain and Poland.

"They're absolutely different armed forces from what we had before. Before 2014, even in military doctrine, we didn't have any enemies," he said. "After 2014, the Ukrainian armed forces became a real instrument to fight against aggression."

That's only a first step, though, Samus says, as Ukraine still has a long way to go to build up its navy and air defenses to deter a full-scale Russian attack.