It was 2010, and Sen. Bernie Sanders had already been in Congress for nearly two decades. The Vermont independent had a long — and consistent — track record, but at that point, he hadn't yet emerged as a national figure on the left.

That quickly changed on Dec. 10, starting at 10:25 a.m. and over the following eight-and-a-half hours.

The agreement — which extended the Bush-era tax cuts that the Democratic Party had railed against for years, and lowered the estate tax threshold for the mega-wealthy — enraged progressives like Sanders.

While Biden and President Obama argued that those concessions paved the way for Democratic priorities like an extension of unemployment benefits, Sanders didn't buy it.

"You can call what I am doing today whatever you want. You can call it a filibuster. You can call it a very long speech," Sanders said toward the top of his marathon. "I am simply here today to take as long as I can to explain to the American people the fact that we have to do a lot better than this agreement provides."

The moment resonates nearly a decade later, as Sanders battles for the Democratic presidential nomination with the chief architect of the deal, Biden.

Sanders' filibuster underscored a question that has become central to the current nomination battle: whether compromising to get things done, or fighting on principles, is the better way to chart political progress.

A deal forged by Biden and McConnell

That December morning, Obama was already facing a lot of pressure.

Democrats had just lost the House of Representatives. And here was the president, about a month later, asking his party for a major tax deal that would extend the Bush administration's tax cuts for the wealthy — something Democrats had campaigned against for years.

"The issue here is not whether I think the tax cuts for the wealthy are a good or smart thing to do; I've said repeatedly that I think they're not a smart thing to do," Obama told NPR's Morning Edition in an Oval Office interview recorded the evening before. "The problem is that this is the single issue the Republicans are willing to scotch the entire deal for."

With Bush's landmark tax cuts set to expire on New Year's Eve, McConnell and fellow Senate Republicans had laid down a gauntlet to Obama and Democrats: They'd hold up all Senate business unless the tax breaks were extended.

Obama tapped Biden to figure out a deal with McConnell, and the two men reached one relatively quickly. According to a Senate Republican aide, Biden and McConnell hammered out the agreement in several phone calls over the course of a single weekend.

Republicans got the Bush tax cuts extended for two more years — past the 2012 election. They also got a lower estate tax rate. In return, Democrats got an extension of unemployment benefits and a range of broader tax cuts aimed at lower- and middle-income earners, including a temporary reduction in Social Security payroll taxes.

Obama and Biden said the whole thing would help the still-recovering economy, and clear the way for a lot of other legislative business to get done by year's end.

To Sanders, Obama's justifications sounded like something he was used to hearing from Republican presidents.

"He was very frustrated," recalled Warren Gunnels, a longtime Sanders staffer that the 2020 presidential campaign staff now jokingly refers to as the candidate's "chief of receipts."

"He wanted to plot out a strategy to do everything that we could to defeat that deal," said Gunnels, and the idea of a filibuster was born.

Even though Sanders said at the beginning of the speech that he wasn't out to set any records, Gunnels said the unofficial goal was to top an eight-hour mark that had been set years earlier by Nevada Sen. Harry Reid.

Might we have to compromise? Yeah. Maybe we do. But you've got to wage the fight before you compromise.

Sanders didn't want to resort to any gimmicks — like Texas Sen. Ted Cruz's reading Green Eggs And Ham during an hours-long anti-Obamacare speech in 2013 — so he, Gunnels and other staffers hammered out several general "refrains" that the senator would keep returning to.

Sanders kept circling back to two main points as the speech went on.

First, that public opinion was on his side. "The polls show us the American people do not believe millionaires and billionaires need more tax breaks," he said at one point.

And, foreshadowing his future presidential campaigns, Sanders made a point to talk past the other lawmakers — who he likely realized were mostly going to vote for the bipartisan deal. He kept urging people to call Congress to complain.

"By and large, it is not a good deal. We can do better," he said several hours in. "And if the American people stand up and work with us, if they get on the phones — if they call up their senators, if they call up their congressmen — if they make their voices heard and said, 'Enough is enough. The rich have got it all right now,' " Sanders thought the deal could be scuttled.

That's when Democrats really began to take notice. "The calls to offices, after a couple hours of the speech, they couldn't get in," Reid said earlier this year. The Senate website was also briefly overwhelmed by traffic. And, at a time when the feat was more of a political novelty, Sanders trended on Twitter and added scores of new followers.

Bringing Bill Clinton to the lectern

Gunnels noted all those developments from the Senate floor, but it wasn't until the White House responded in a dramatic way that he fully realized how much of an impact the speech was having in progressive circles.

"I don't even know if they had a topic in mind, but they just rolled out Bill Clinton while Bernie was speaking," Gunnels recalled, laughing. 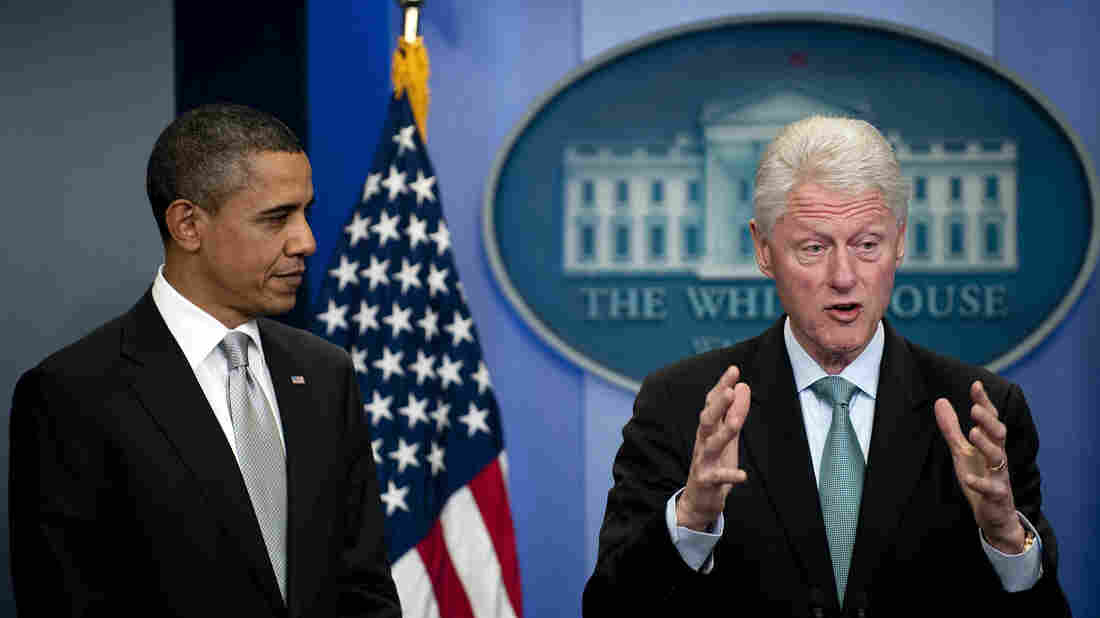 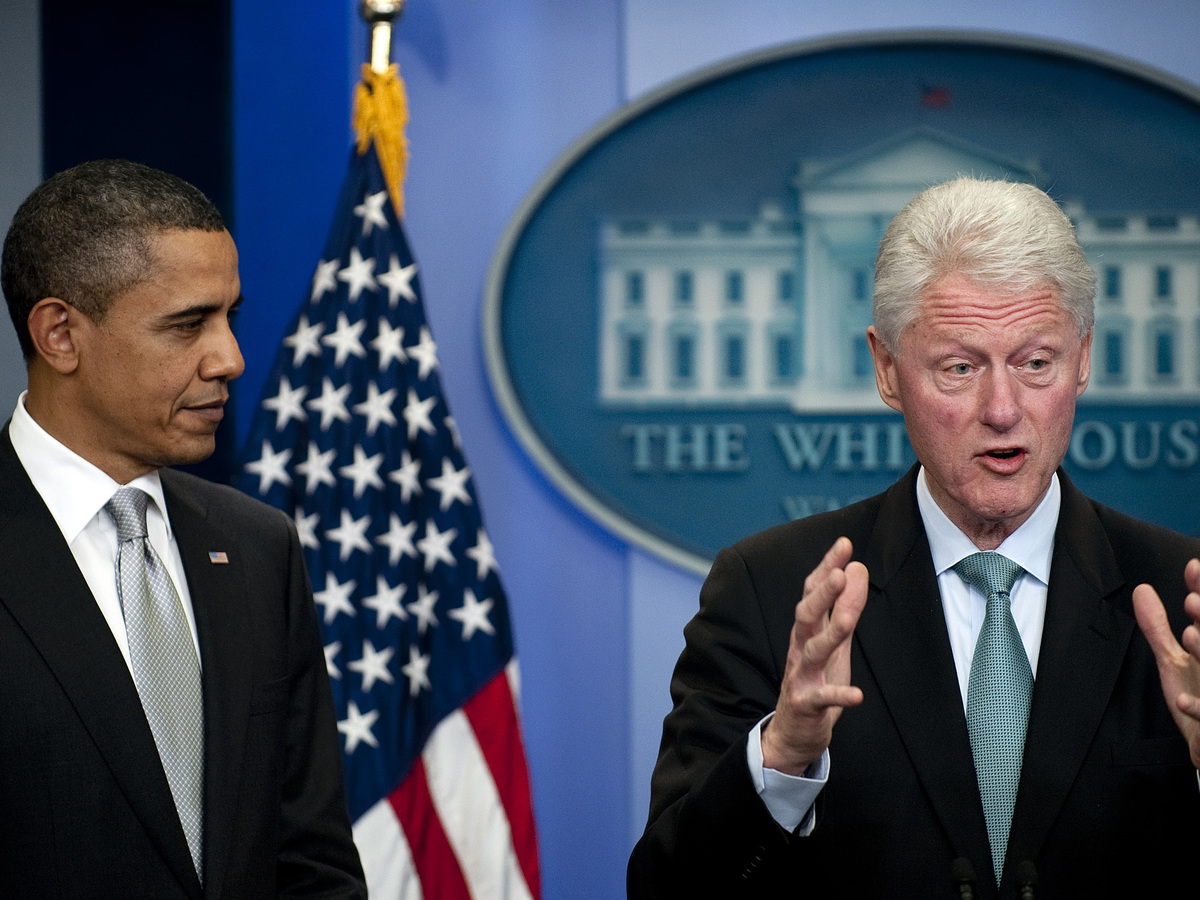 Former President Clinton speaks to the press with President Obama in the White House Briefing Room on Dec. 10, 2010.

In a move that launched scores of pre-meme memes, Obama had strolled into the White House briefing room with the 42nd president, who looked thrilled to be back at the famous lectern.

As Obama stood next to him — and then alone, after Obama left to return to a holiday party — Clinton defended the deal for more than a half hour. "The agreement taken as a whole is, I believe, the best bipartisan agreement we can reach to help the largest number of Americans," he said.

Meanwhile, on the other end of Pennsylvania Avenue, Sanders kept going.

He railed on corporate pay and government subsidies for energy giants like Exxon Mobil — familiar themes for his later presidential runs. He decried the deal's increase in deficit spending.

And he bluntly criticized Obama. "His credibility has been severely damaged. We are caving in on this issue and we should not be," Sanders said.

"The spark that set things off"

The Senate overwhelmingly approved the tax package on an 81-19 vote. Despite loud protests from House Democrats, the House approved the measure too, and it became law.

By all short-term measures, Sanders' filibuster had failed.

An exhausted Gunnels said his despair quickly turned around, though.

"When you look back at that, I think it might have been the spark that set things off," he said, sitting in Sanders' presidential campaign headquarters.

Added Jeff Weaver, the candidate's top strategist: "[The filibuster] brought Bernie Sanders to the notice of millions of Americans who didn't know who he was, and I think it laid a lot of the groundwork for the success that he would see in the 2015-2016 election cycle."

The speech became a book, which became a bestseller. And progressives frustrated by the Obama administration's deal-cutting had a new hero to tout, as Republicans gained more leverage in Washington over the coming years.

The next year, Biden stood next to McConnell on a stage and defended the deal, which he argued spurred economic growth. "We've got a long way to go," Biden said. "But it actually was not only a compromise; it was a compromise that was useful for the American economy."

Obama did get those top-tier Bush tax cuts eliminated down the line.

Still, in the immediate wake of the filibuster, Sanders told NPR he was tired of compromises. "Might we have to compromise? Yeah. Maybe we do. But you've got to wage the fight before you compromise. You've got to take the case to the American people. And we didn't do that."

Nearly a decade later, Sanders and Biden are battling for the Democratic presidential nomination, in a contest that largely revolves around that same key question.