Accessibility links
'The Force Is With Our People' Connects Indigenous Culture To A Galaxy Far Away The Rise of Skywalker speaks to the historical experiences of many in the Indigenous community. An exhibit by Native artists attempts to shed light on those connections. 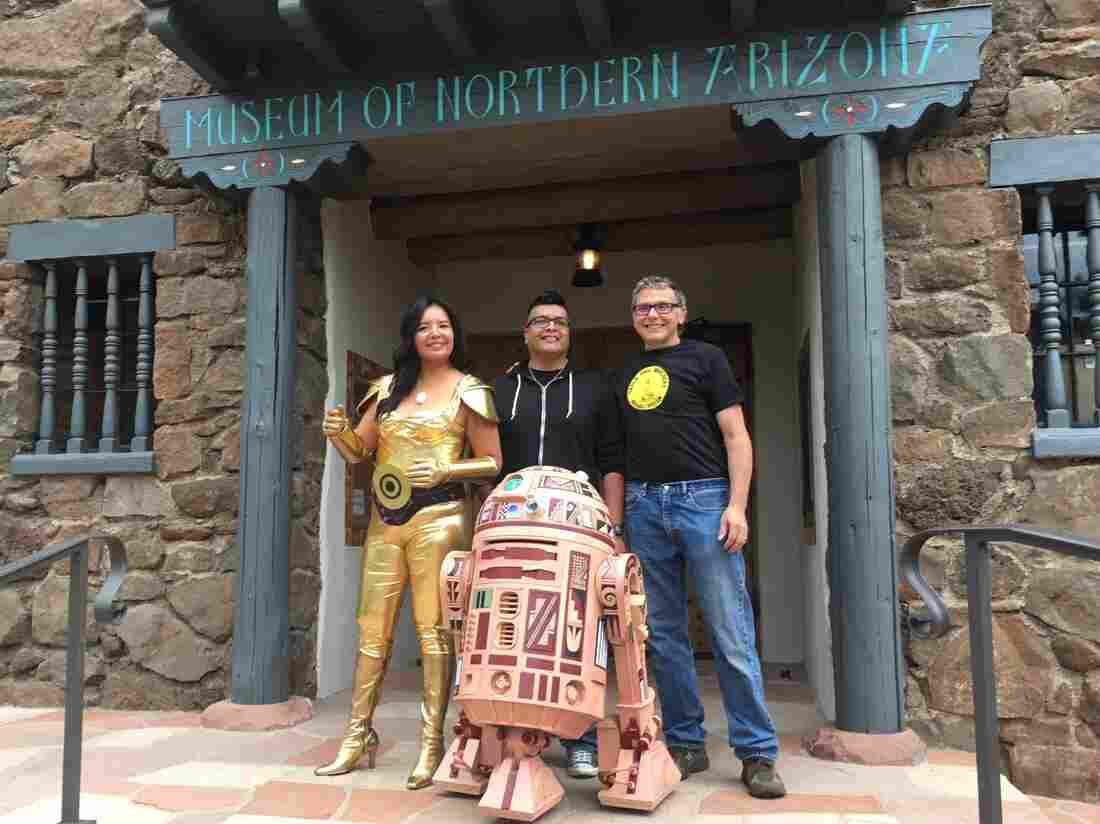 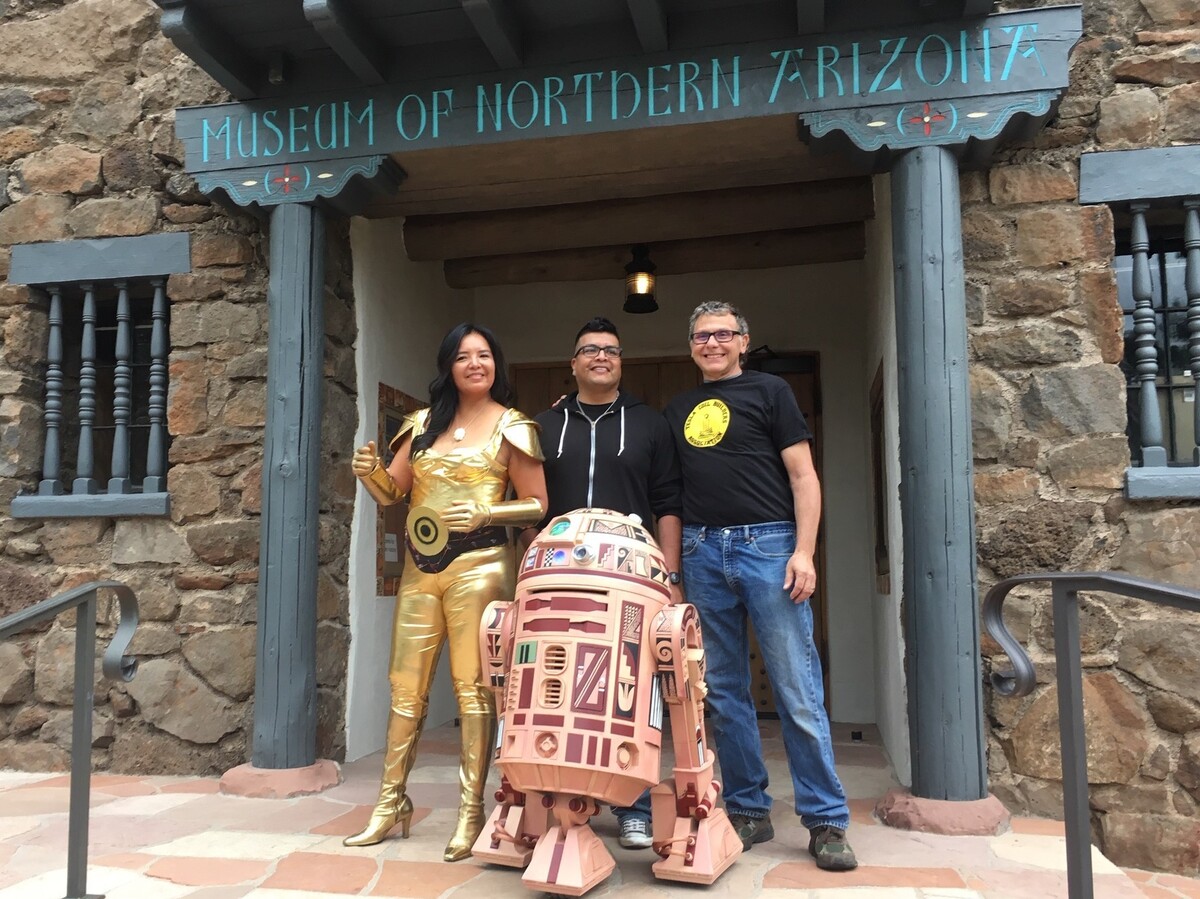 Geri Hongeva (left), who voiced C-3PO in the Navajo translation of A New Hope; artist Duane Koyawena (center); and engineer Joe Mastroianni with Hopi R2 at the Museum of Northern Arizona in Flagstaff.

Artist Duane Koyawena is piloting a custom R2D2 unit in front of the Museum of Northern Arizona in Flagstaff, Ariz. It's life-size and has all the signature bleeps and squawks of the original. But its appearance has a unique Southwestern spin.

"When I was thinking about it, I was like ... wouldn't it be cool to see an R2 that's decked out [and] looks actually like a pottery?" he says. "So along with that comes the designs, and so the tans and the reddish burn marks from when they fire their pottery."

At first glance the traditional Hopi maroon-and-tan patterns are a surprising look for the famous droid. But Koyawena says it makes total sense for R2. 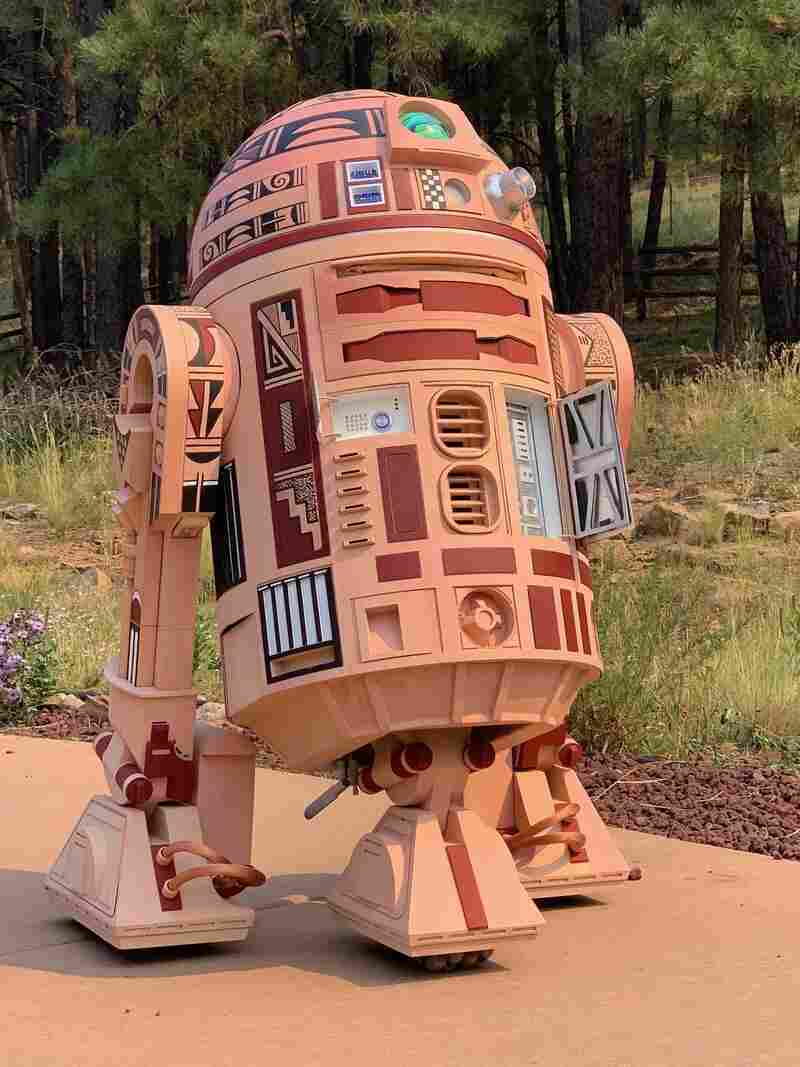 toggle caption
Courtesy of the Museum of Northern Arizona 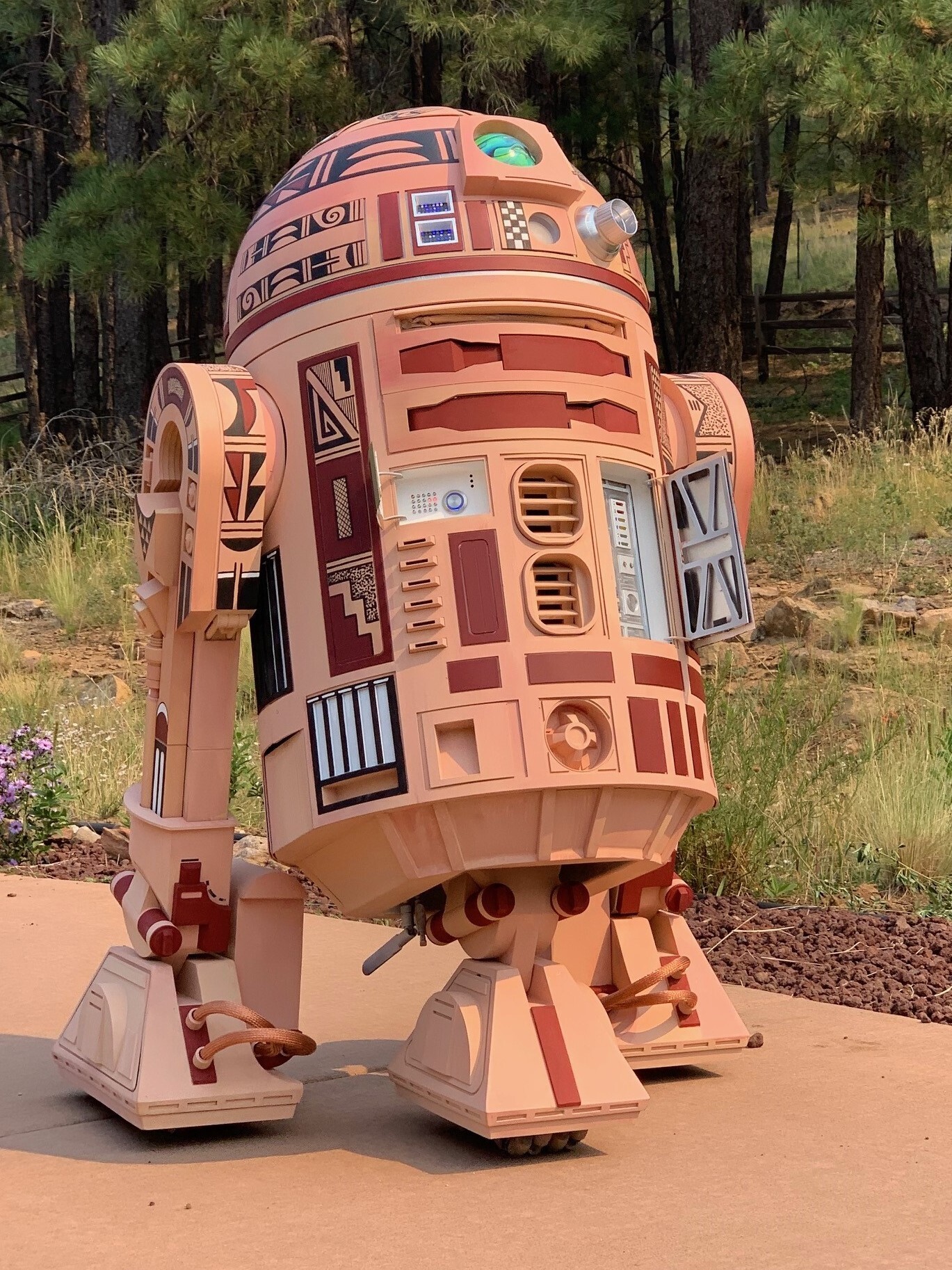 Courtesy of the Museum of Northern Arizona

"A lot of elders, or our uncles or friends, always tell us in ceremony or something going on 'nahongvitah,' which means to give it your all, or just to be strong and to persevere. So, I feel like the Hopi R2 kind of fits in that same line," he says.

Koyawena is one of 25 artists from more than a dozen Southwestern tribes taking part in the art exhibit "The Force Is With Our People." The pieces reflect Star Wars themes, such as endurance and rebellion, that have resonated powerfully with the franchise's devotees for decades. As it turns out though, Star Wars also speaks strongly to the historical experiences of many in the Southwest's Indigenous communities.

"I think there's clearly some parallels ... between Native stories — things like the Hero Twins, [a] very prominent story in Navajo culture — parallels between that and Star Wars, of course Luke and Leia being basically Hero Twins in that story," says Museum of Northern Arizona curator and ethnographer Tony Thibodeau.

He got the idea for the exhibit during a trip to Indigipop X, the Indigenous Comic-Con in Albuquerque, N.M., and with the release of The Rise of Skywalker — said to be the final installment of the original saga — the timing for the show seemed perfect.

"We're trying to get at that question of are there parallels between the Star Wars narrative and Native culture that make it resonate with these Native artists and Native communities on the Colorado Plateau in a specific way?" Thibodeau says.

The pieces span a wide variety of styles from fine art painting and ceramics to T-shirts and other pop art. A glass case in the middle of the exhibit holds tiny wooden Chewbaccas carved and painted in a sparse Navajo style. Nearby stands a storm trooper adorned with patterns by an Apache artist, and a comic book illustration represents R2D2 and C-3PO as Navajo Code Talkers.

The exhibit's recent opening night was lively with costumed Jedis and a menacing Darth Maul, among other characters. Hopi R2 was the star of the show and worked the room, and both kids and adults interacted with and even talked to the droid as if it was an old friend. Museum staff say visitors to the exhibit, including many Native Americans, are enchanted by it all. The art seems to bridge generations, drawing families made up of wide age ranges.

"I've been drawing Star Wars in my artwork probably since I was a little kid, probably since the late '70s, early '80s," says New Mexico-based Navajo artist Ryan Singer, whose work is prominently featured in "The Force Is With Our People."

He paints vivid depictions of reservation life that overlap with the Star Wars universe, and the connections run deep.

"There's always that rebellion kind of attitude or spirit — like the little guy, people that don't have all the power and they're getting trampled over ... Indigenous people ... can kind of feel like the rebels fighting the Empire," Singer says.

Cultural assimilation and the lasting effects of colonialism are strong in Singer's work. His painting "(De)Colonized Ewok" was inspired by the trauma of the forced boarding school experiences of thousands of Native Americans in the 19th and 20th centuries. One side features an Ewok dressed traditionally with animal teeth and a spear; on the other it has combed hair and wears a suit with the Imperial Crest.

"You can use Star Wars metaphors or motifs to kind of reel people in to educate them, to let them see what's happening or see what happened before, say, in history," Singer says.

His work also has an impish sense of humor. Another piece is a desert snapshot from a late-1800s reservation trading post. A woman carries a tin of coffee and a horse-drawn wagon awaits an owner. But it's parked next to Luke Skywalker's speeder and a Navajo man chats up a pair of Jawas while a bantha meanders in the background. It could easily be the planet Tatooine. For a moment, the parallel universes are one, bringing that galaxy far, far away a little closer to home.