Accessibility links
Alcee Hastings, Trump Impeachment Supporter, Was Once Impeached Himself Rep. Alcee Hastings is helping advance the full House vote to impeach Trump. Being a participant on both sides of impeachment places him alone in American political history.

After Being Impeached Himself, Congressman Looks To Impeach Trump

After Being Impeached Himself, Congressman Looks To Impeach Trump 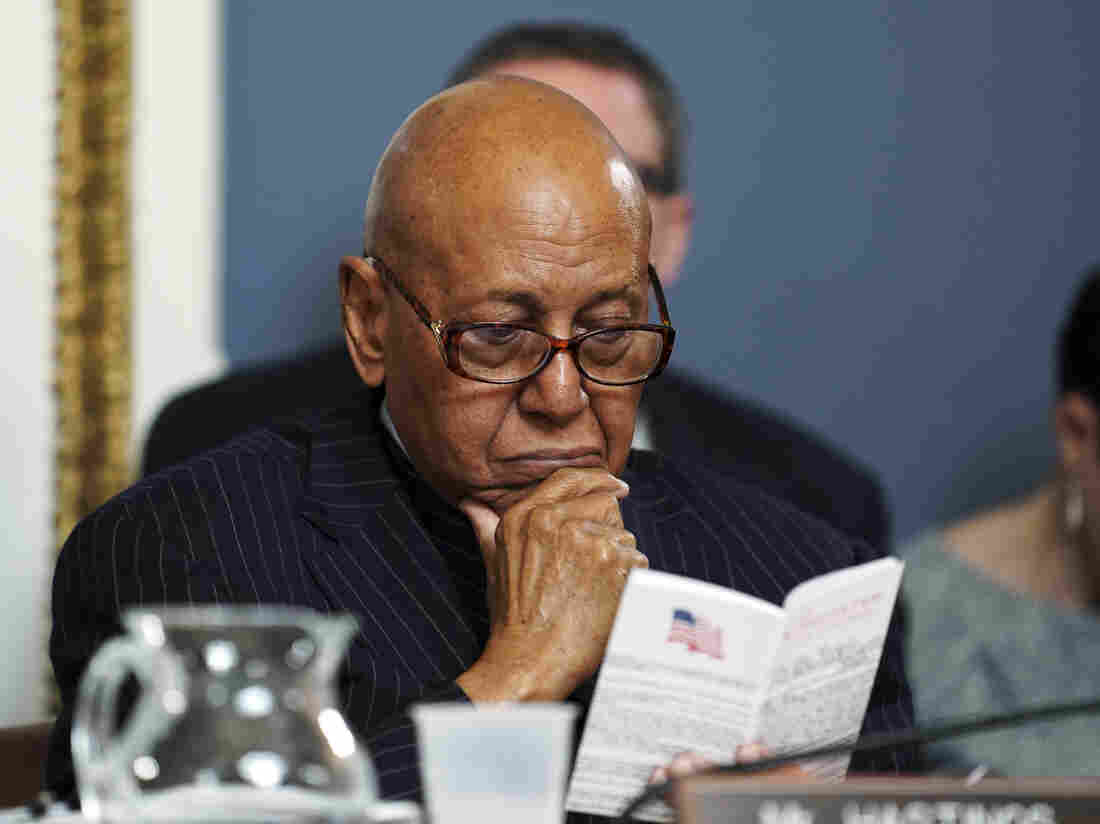 Rep. Alcee Hastings, D-Fla., attends a meeting of the House Committee on Rules to consider the resolution to impeach President Trump on Capitol Hill in Washington on Tuesday. Erin Schaff/AP hide caption 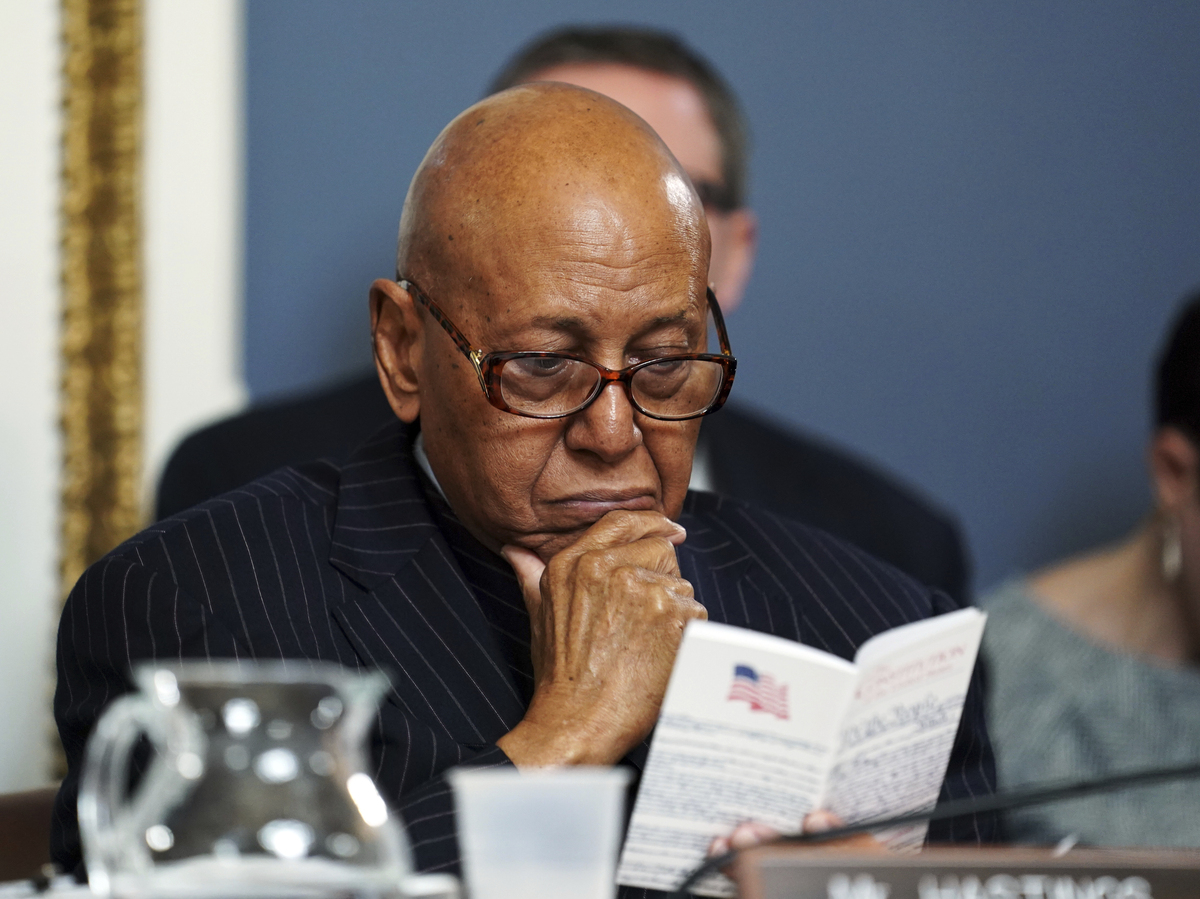 Rep. Alcee Hastings, D-Fla., attends a meeting of the House Committee on Rules to consider the resolution to impeach President Trump on Capitol Hill in Washington on Tuesday.

Rep. Alcee Hastings, D-Fla., is among the 19 federal officials in American history who have been impeached by the House of Representatives.

Now, he wants to cast a vote to impeach No. 20: President Trump.

Three decades ago, Hastings was impeached and removed from the federal bench when he was a U.S. District judge in Miami. But then he rebooted his career by becoming a Florida congressman. Now in his 14th term, he serves as vice chairman of the House Rules Committee, which on Tuesday debated the parameters for Wednesday's full House vote on impeachment.

Hastings' own past, as well as the fact that he was involved intimately in President Bill Clinton's impeachment, which he voted against, gives him a unique position this time around as an advocate of impeaching Trump.

On the one hand, conservative critics point to what they see as the hypocrisy of an impeached judge with an ethical cloud looming over him being among those setting the rules for Trump's impeachment in the House.

But on the other, legal experts say, constructive insights could come from Hastings, who is now 83 and was Florida's first black federal judge.

"Ethically, I don't think Hastings has anything personal to gain that would influence his vote or that would suggest that he should abstain from voting," said Aubrey Jewett, a politics professor at the University of Central Florida.

"Hasting's record certainly gives him more first-hand direct experience with the issue of impeachment than any other member of the House," Jewett said.

"On balance, I think Hastings' unique, and potentially valuable, perspectives should outweigh concerns about conflicts of interest or ethics," he said.

Another thing experts agree on: Hastings stands alone in American political history, expected to become the first member of Congress to vote in support of impeachment after being impeached himself. 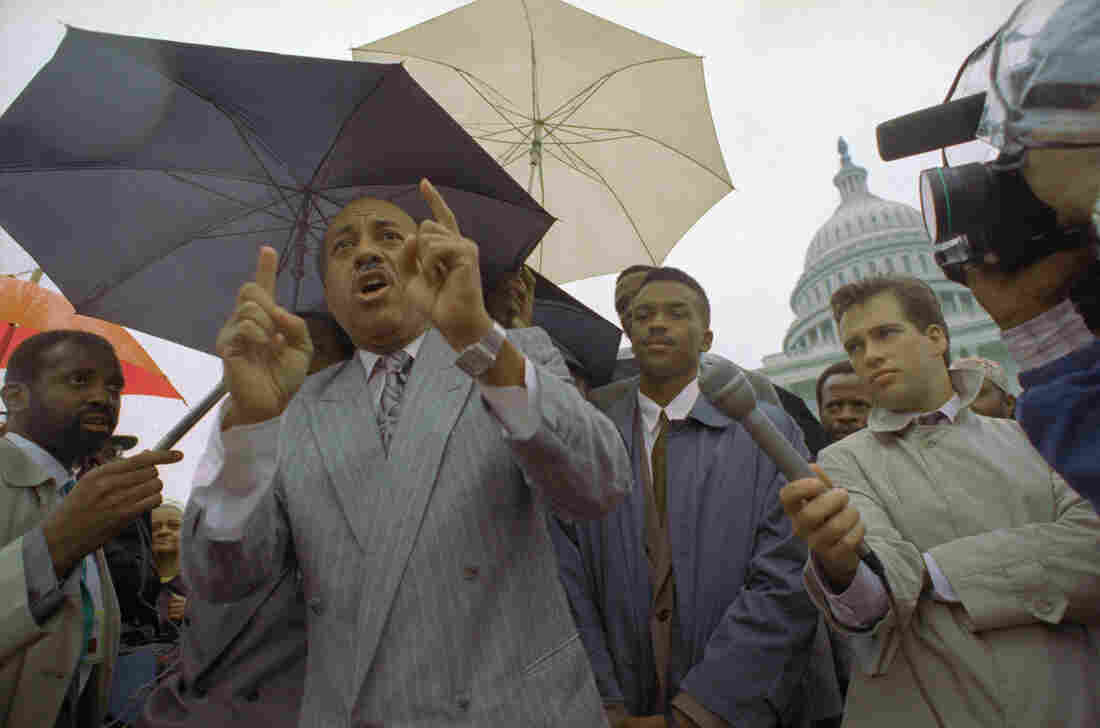 Alcee Hastings addresses a rally of his supporters outside the Capitol in the midst of his ongoing impeachment trial before the Senate in 1989. Bettmann/Bettmann Archive hide caption 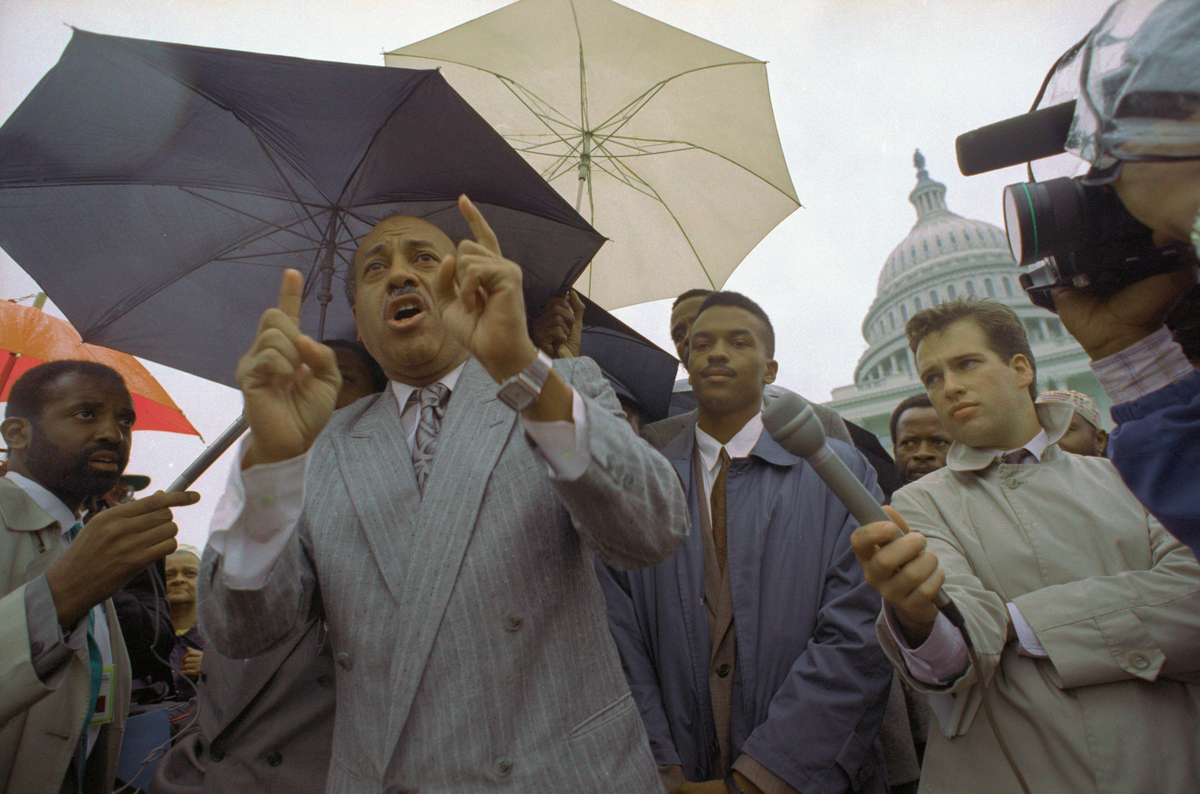 Alcee Hastings addresses a rally of his supporters outside the Capitol in the midst of his ongoing impeachment trial before the Senate in 1989.

Back in 1988, when Hastings was a Miami-based federal judge, he was impeached by the House. He was accused of accepting a $150,000 bribe in return for going easy on two mob-connected defendants who had a case in his courtroom in the early 1980s.

Defiant in the face of the House's action, Hastings vowed in a report that aired on NPR in August 1989 that he would be acquitted in the Senate.

"I said that I would win, and I will win. And how I will do so is with the help of our Lord and with right on my side as I have had continuously," Hastings said. "I'll put this Mickey Mouse horror show behind me."

But he was wrong.

Two months later, the Senate convicted Hastings for conspiring to solicit cash in return for a light sentence and for making false statements.

His actions, Senate lawmakers said, "undermined the integrity and impartiality of the judiciary" and "betrayed the trust of the people of the United States."

His Senate conviction put an end to his career as a federal judge, which is usually a lifetime appointment.

It was a twisted turn of events, because the same bribe scandal had gotten him indicted years earlier, but he beat those charges when a jury, in 1983, acquitted him.

Prosecutors said a middle man had tried to make a bribe down payment of $25,000 before being caught with bags of $100 bills totaling $125,000, which authorities said was intended to pay Hastings for helping out two racketeers who investigators said had opened a channel of communication with the then-judge. Authorities recorded a call in which they said Hastings was talking in code about the bribery deal.

Hastings maintains that he never knew about the scheme, saying the others involved attached conditions to the money that were made up.

His legal team, which included his fiancée at the time, argued that the prosecution of Hastings had nothing to do with ferreting out corruption and instead was motivated by his race and his vocal opposition to the Reagan administration.

The jury bought that defense, unanimously clearing him of any wrongdoing.

But then suspicions arose that Hastings lied and falsified evidence during his trial, leading a special committee of the 11th Circuit Court of Appeals, to recommend that Hastings be impeached.

On Oct. 20, 1989, the Senate voted on 11 of the 17 articles of impeachment, ultimately convicting him of eight articles.

Watching his judgeship go down in flames did not deflate Hastings. If anything, it appeared to have emboldened him.

The same day he was convicted of high crimes and misdemeanors by the Senate, Hastings announced his next move: running to be the governor of Florida.

Being convicted and removed from his judicial post did not disqualify him from holding future public office, and he planned on capitalizing on that.

"I think not only can I be elected, I think I will, because I think Floridians are tired of ordinariness," Hastings told reporters the same day he was kicked off the bench by the Senate. 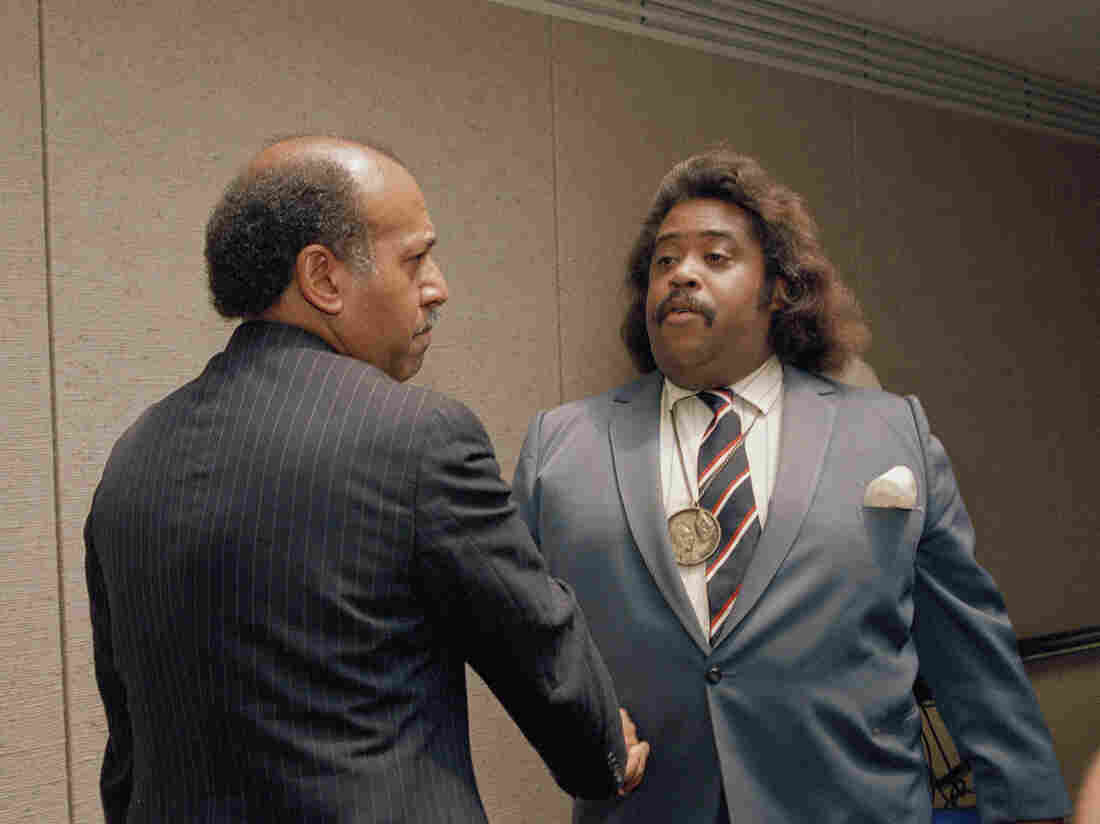 Hastings, left, shakes the hand of Rev. Al Sharpton in July 1989, the year Hastings was impeached and removed from the federal bench by Congress. Now, he is helping write the rules for the impeachment vote of President Trump. John Duricka/AP hide caption 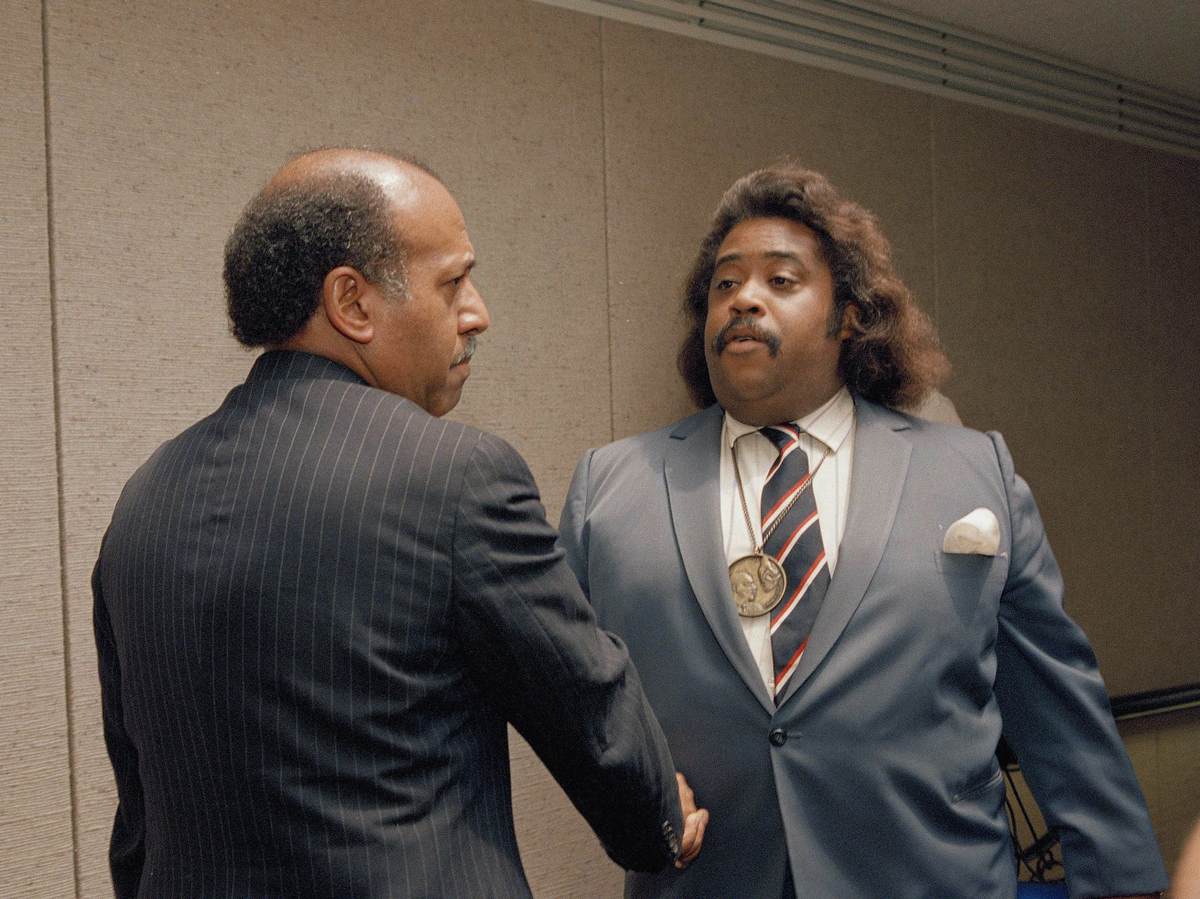 Hastings, left, shakes the hand of Rev. Al Sharpton in July 1989, the year Hastings was impeached and removed from the federal bench by Congress. Now, he is helping write the rules for the impeachment vote of President Trump.

He did not win his bid for the governor's office. So he kicked off a campaign to become Florida's secretary of state, a race he also lost. It was an outcome that was starting to become familiar, having sought and lost eight attempts at political office across his lifetime.

Hastings, though, was nothing if not tenacious.

In 1992, he set his sights on a congressional seat in Florida. For him, the ninth time was a charm. He won, joining the same elected body that had impeached him just three years before.

"He was a phoenix, rising from the ashes of his judicial career to begin a new one in Congress," wrote The Palm Beach Post in a series published this year looking back at Hasting's long and turbulent political career.

Voters in Florida have reelected him 13 times, typically by overwhelming margins.

Hastings' biography on his congressional website makes no mention of his impeachment saga, but does nod to his past life on the federal bench.

"Known to many as 'Judge,' Alcee Hastings has distinguished himself as an attorney, civil rights activist, judge, and now Member of Congress," according to the House of Representatives' website.

But speaking to The Palm Beach Post, Hastings said while Trump "has degraded and debased the presidency," he scoffs at the notion that impeachment can be an apolitical process.

"Impeachment is as partisan as hell," he said. "I know it because I've lived it."