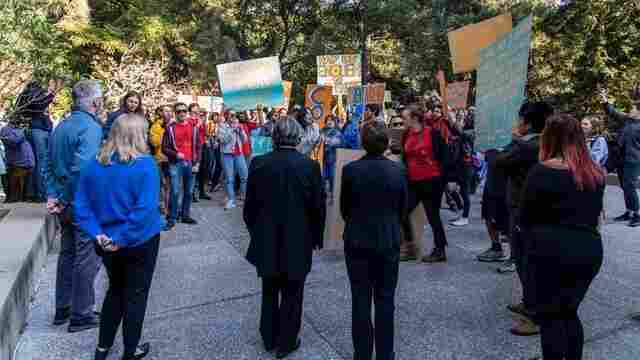 Graduate students marched on Kerr Hall, where the administration offices reside, to deliver their demands to the chancellor on Nov. 7. Watching in the foreground, with their backs to the camera, are Chancellor Cynthia Larive and Executive Vice Chancellor Lori Kletzer. Courtesy of University of California, Santa Cruz graduate students hide caption 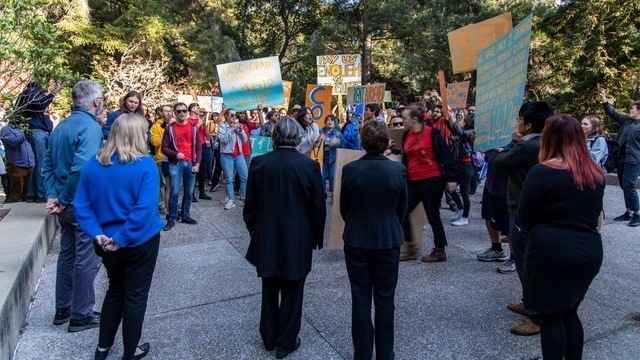 Graduate students marched on Kerr Hall, where the administration offices reside, to deliver their demands to the chancellor on Nov. 7. Watching in the foreground, with their backs to the camera, are Chancellor Cynthia Larive and Executive Vice Chancellor Lori Kletzer.

All is not well in Banana Slug country.

Final grades for the fall quarter are due at the University of California, Santa Cruz, the campus of some 19,000 students with a curious mascot, but a wildcat strike has put those report cards in jeopardy. Graduate students, who declared a work stoppage earlier this month, have vowed not to deliver grades for the undergraduate courses they work with until the administration meets their demands for higher pay.

Specifically, graduate students are calling for a cost of living adjustment — a monthly bump of just over $1,400 to help them cope with the region's high cost of housing. And to do so, they have decided to act independently of their official statewide union, United Auto Workers Local 2865, which in 2018 negotiated a systemwide wage increase of 3% per year over four years.

The union has not publicly backed the students' wildcat strike and did not respond to NPR's request for comment Wednesday.

"Really, it's rent burden," Stephen David Engel, a Ph.D. student in the school's History of Consciousness Department, explains to NPR. "Graduate students are paying 60-70% of their wages on rent — and that includes, by the way, students who live in, quote, 'subsidized housing' on campus. So there's really no refuge — the university does not provide a refuge [from] the housing market."

He cites, for examples of those who are struggling, a colleague who has faced the prospect of losing the home she lives in with her son, others who have spent time living in their cars, and still another who lives in a shack in the woods without functioning heat.

University administrators, for their part, have refused formal negotiations to end the work stoppage, which they have repeatedly called illegal. The contract the University of California reached with the UAW chapter — which represents teaching assistants, tutors, graduate student instructors and others across the UC system — is supposed to last for four years.

"UC Santa Cruz cannot negotiate a cost of living adjustment while these students are under contract with the UAW," says school spokesman Scott Hernandez-Jason. He says that the administration is committed to supporting the students and recognizes the difficulties of the area's housing market — but that it won't negotiate with them as long as the strike continues.

The school has asserted that it's "actively working on short- and long-term solutions," including proposals for additional university housing and potential funding packages for students. But such assurances have done little to assuage the frustrations of graduate students, who opened their campaign with a march on the campus administration building early last month.

The plan, according to Engel and others involved with the strike, was to escalate slowly, perhaps with some version of a work stoppage possible if they had not received a satisfying response by spring. But less than a month later, on Dec. 5, Engel's email to administrators prompted a swarm of reply-all messages calling for a strike immediately.

"Many students are struggling — seriously struggling — just to have a safe place to sleep, and that can have serious implications for the quality of research and education that we can produce and provide," says James Sirigotis, a Ph.D. student in sociology.

"These messages were coming from all across campus — from the social sciences, the humanities, chemistry and engineering," he adds. "That was really amazing, to see this kind of widespread desire for more."

By Dec. 8, more than 250 students had assembled in person and on video conference to cast their votes, overwhelmingly electing to withhold grades for the fall quarter.

Today the #UCSC grad student voted to go on a wildcat grading strike to win a Cost of Living Adjustment (#COLA). No COLA? No Grades! pic.twitter.com/Gms94PTTSs

Since then, the strikers have received words of support from the Santa Cruz Faculty Association and academic departments across the campus. Students at other schools in the UC system, including Berkeley, have also expressed solidarity.

Perhaps it's little wonder the Santa Cruz students have found support beyond the boundaries of their own campus, as wages for teaching assistants, adjunct faculty, lecturers and others have attracted protests recently. Similar strikes have taken hold at Harvard University — where grad students have picketed for their own cost of living adjustment, among other demands — and as far afield as the University of Sheffield in the U.K.

Back in Santa Cruz, the situation remains very much in flux.

Administrators and graduate students alike are waiting to see just how many grades are returned by the deadline Wednesday. In a note to faculty late last week, Lori Kletzer, the interim campus provost and executive vice chancellor, maintained that ultimate responsibility for final grades rests with professors, regardless of how much work they had delegated to their teaching assistants.

Both administrators and students have professed their desire to minimize the harmful effects on undergraduate students, many of whom rely on the timely submission of grades for athletics or outside fellowships.

But neither side has shown any intention of budging.

"The question is whether the university as a whole values our labor and the labor of other graduate students at other universities," Engel says, adding: "Let's really challenge the givens of the present age when it comes to the university and start thinking about how everyone on campus can be supported."

An earlier version of this story implied that the systemwide wage increase was 3% over four years. It's actually 3% per year for four years.