Accessibility links
15 Horses Were Killed After Being Hunted In Rural Kentucky, In An 'Act Of Evil' "It looked like a battlefield for just horses — we counted 15 that we found dead," Floyd County Sheriff John Hunt says.

'Act Of Evil': 15 Horses Were Shot After Being Hunted In Rural Kentucky

'Act Of Evil': 15 Horses Were Shot After Being Hunted In Rural Kentucky 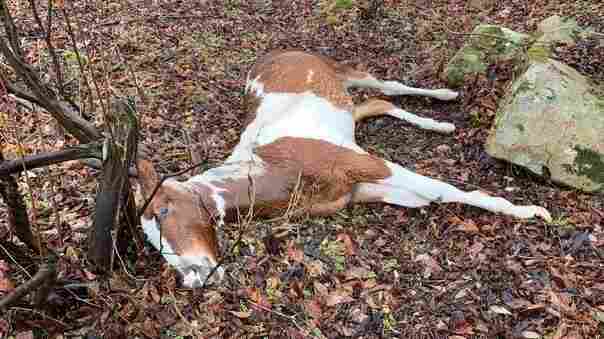 Fifteen horses were shot and killed in Floyd County, Ky., in what one resident calls "a very large act of evil." Courtesy of Megan Goble hide caption 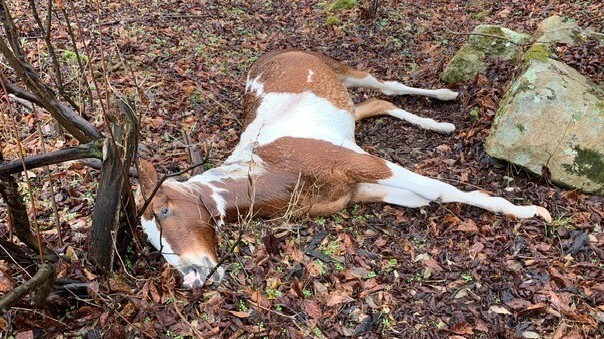 Fifteen horses were shot and killed in Floyd County, Ky., in what one resident calls "a very large act of evil."

Fifteen horses were shot and killed in the woods of Eastern Kentucky in what authorities call a cruel and inhumane crime that they're now working to unravel. Local authorities are offering a $1,500 reward — an amount boosted by donations from people who want the killer brought to justice.

The horses were found in the area of a rehabilitated strip mine near Floyd County's border with neighboring Pike County. For years, locals say, 30 or more horses have roamed the rough and isolated terrain there. But that changed horribly this week.

"It looked like a battlefield for just horses — we counted 15 that we found dead. All 15 appeared to us to have been shot," Floyd County Sheriff John Hunt told local TV station WYMT.

"This is very inhumane," Hunt says, "and it's a very cruel act of somebody who just apparently had nothing else to do or whatever, just to go back on a strip job and shoot down horses who were — one of them obviously was feeding, had grass in its mouth."

At least two of the slain horses were pregnant and miscarried after being shot, says Megan Goble, who lives near the site. Her family owns part of the land that has become home to the horses. She says the horses lived in two main herds, and she describes them as a mix of animals that were brought there by their owners and those that were born in the secluded area.

"There's a lot of people within our community that go up there and feed them or just go see them or whatever, because, I mean, it's beautiful back there and it's a bunch of horses running," Goble says.

Of the idea that someone would go into the area and shoot 15 horses, Goble says, "I mean, it's just horrific, and it's shook this community pretty good."

The sheriff told the Floyd Chronicle & Times that he put up $500 of the reward money himself. The rest has come from a local pet store and an animal rescue operation that has helped care for the free-roaming horses.

In an update about the case on Thursday, the sheriff's department said that the reward amount "has increased substantially."

The department added: "It has been heartbreaking seeing these beautiful horses killed but it had equally been heartwarming to see all the concerns and see all the support in assisting in the investigation and to give the living horses a good home. Thank you to everyone."

The first call about a group of dead horses came in on Monday, says Goble. That first call referred to as many as five carcasses. Goble, who works in animal rescue, says it took an extra day to begin realizing the full scope of the crime, as cold and stormy weather washed out roads and slowed search efforts. Crucially, Goble's family owns a road that goes into the old strip job: An early attempt by sheriff's deputies to reach the area had to be called off when they couldn't make it through.

When Goble and the deputies reached the area where the dead horses were, she says, "It was a lot worse than I would have imagined."

"We found five of them that were relatively close together" in roughly a 50-yard space, Goble says. Others were more scattered, she says — and she believes there may be other dead horses that still haven't been found.

"I've done rescue for a long time. I've seen some pretty bad things," Goble says. She adds, "This was different. This was a very large act of evil, for lack of a better term. I mean, there's no other way that I can describe it. Somebody went out of their way to go up there and kill these horses, and not even quickly, for no reason. No reason whatsoever."

Describing the carnage, Goble says a yearling had been shot in the face. Other horses had clearly struggled and suffered before dying. It was a stark change from the normal scene there, she says, as people regularly visited the horses to bring them hay or other food during the winter months, when foraging can be difficult.

"Some of them were friendly," Goble says of the horses, "and you could go up there and they'd walk right up to you."

Another group involved in the case is Dumas Rescue, which has helped care for the horses in the past — and which is now helping the sheriff's department search the woods for dead or wounded animals.

"At this time we are all reeling from the effects this horrendous scene has had on our group and the investigating officers. Please keep us in your prayers," Dumas Rescue says on its Facebook page.

"These horses were scattered in various, various places — distances from each other," Dumas Rescue's Tonya Conn told WYMT, saying that the animals would normally have been found in groups.

"So they had been shot, and they'd scattered, and then [were] hunted and shot down."

The rescue group contributed to the reward, and it has been inundated by people offering their own money to boost that total — people outraged by the craven and brutal violence against the horses. Dumas Rescue says the current $1,500 reward doesn't reflect those offers of help, because it's trying to ensure it handles the donations legally.

The other third of the reward money came from Sheena Maynard, owner of local business Lou's Place for Pets. As the investigation proceeds, Maynard has used her business's Facebook page to call on anyone with information about the attack to come forward.

"Guys, we can't have this here in our community. This does not represent who we are," she said. She added, "If you know who is responsible, regardless their age or your relationship to them, I beg you to turn them in before more lives are lost."