Accessibility links
Does New York City Need Gun Control? New York City has stricter gun laws than most other American cities — and lower rates of gun violence. But legal challenges could force the city to loosen its gun control. Will a rise in crime follow? 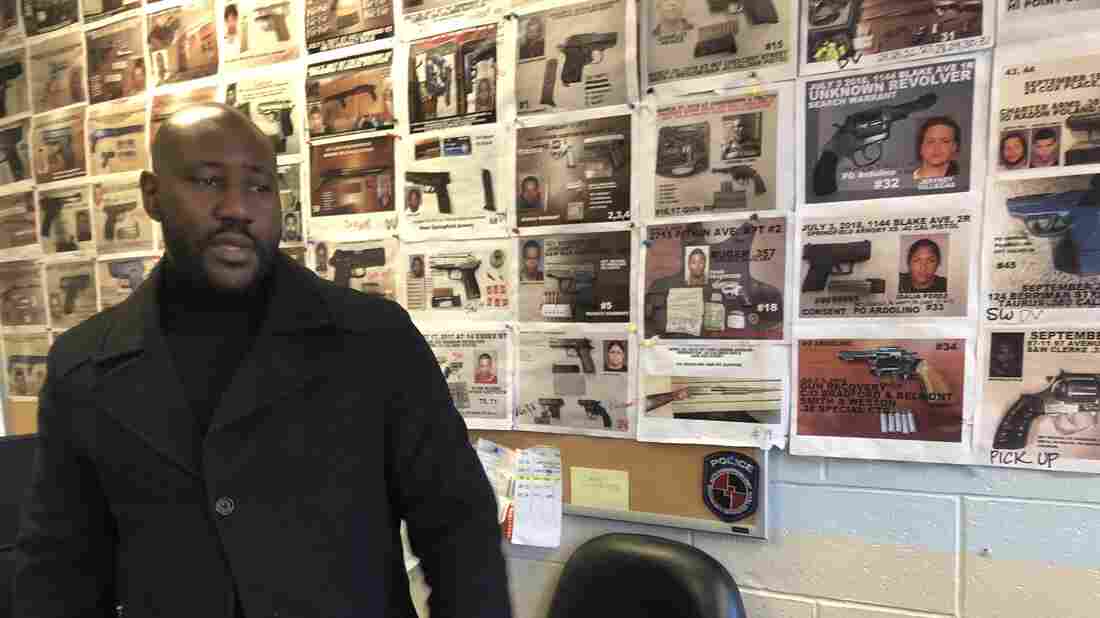 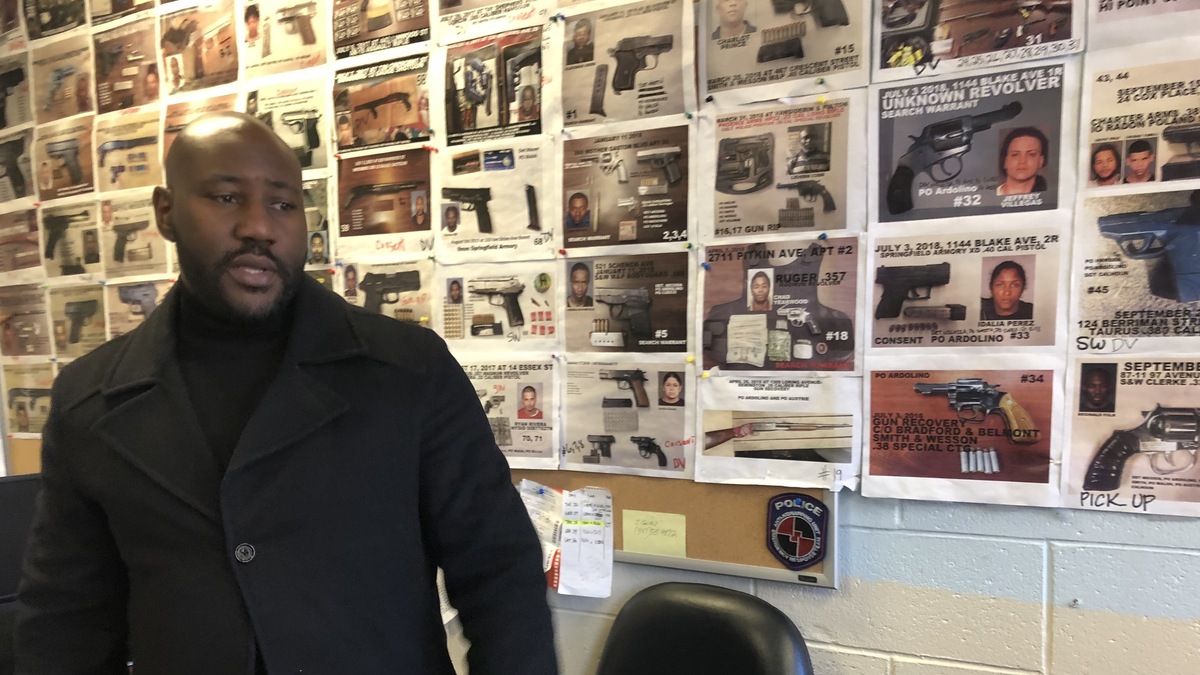 Over the last generation, gun rights have expanded in America, especially the right to carry firearms, both concealed and in the open. The big exception to this expanding gun culture has been New York City.

"We're an oddity in New York," says Darren Leung. He's referring to his business, the Westside Rifle and Pistol Range, a warren-like shooting range in the basement of a building on West 20th Street. One of the few places where it's legal to shoot a gun inside city limits, it's decorated with the kind of pro-gun sentiments that you'd see at ranges in other parts of the United States.

But Leung says the reality for New York gun owners is very different.

All For Naught? Supreme Court Indicates Gun Case May Be Moot

"It's very, very difficult to obtain a license, very costly," he says. It's up to the New York City Police Department to decide whether someone should have a handgun license, and Leung says the police look for reasons to deny applications. Licenses from other jurisdictions — even other parts of New York state — aren't valid in the city, and he says you even have to be careful how to transport legal guns, here.

"Have the weapon unloaded, in a locked box, with a trigger lock on it," he says. "They don't want you to have the ability to use the firearm in a situation."

"No law is going to keep a criminal from getting a gun or committing a crime with a firearm," says Tom King, executive director of the association that brought the suit. The association is based upstate. 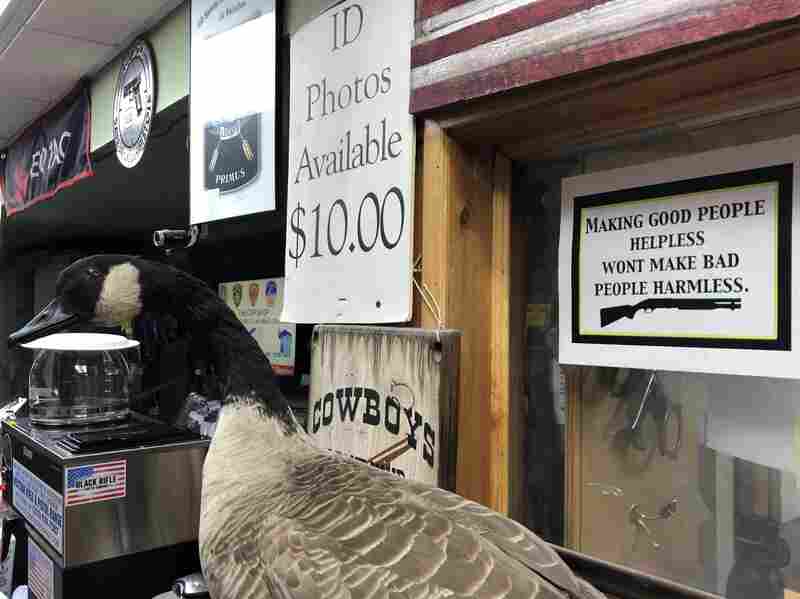 The Westside Rifle and Pistol Range in Lower Manhattan is one of the few places where it's legal to shoot a gun inside city limits. Martin Kaste/NPR hide caption 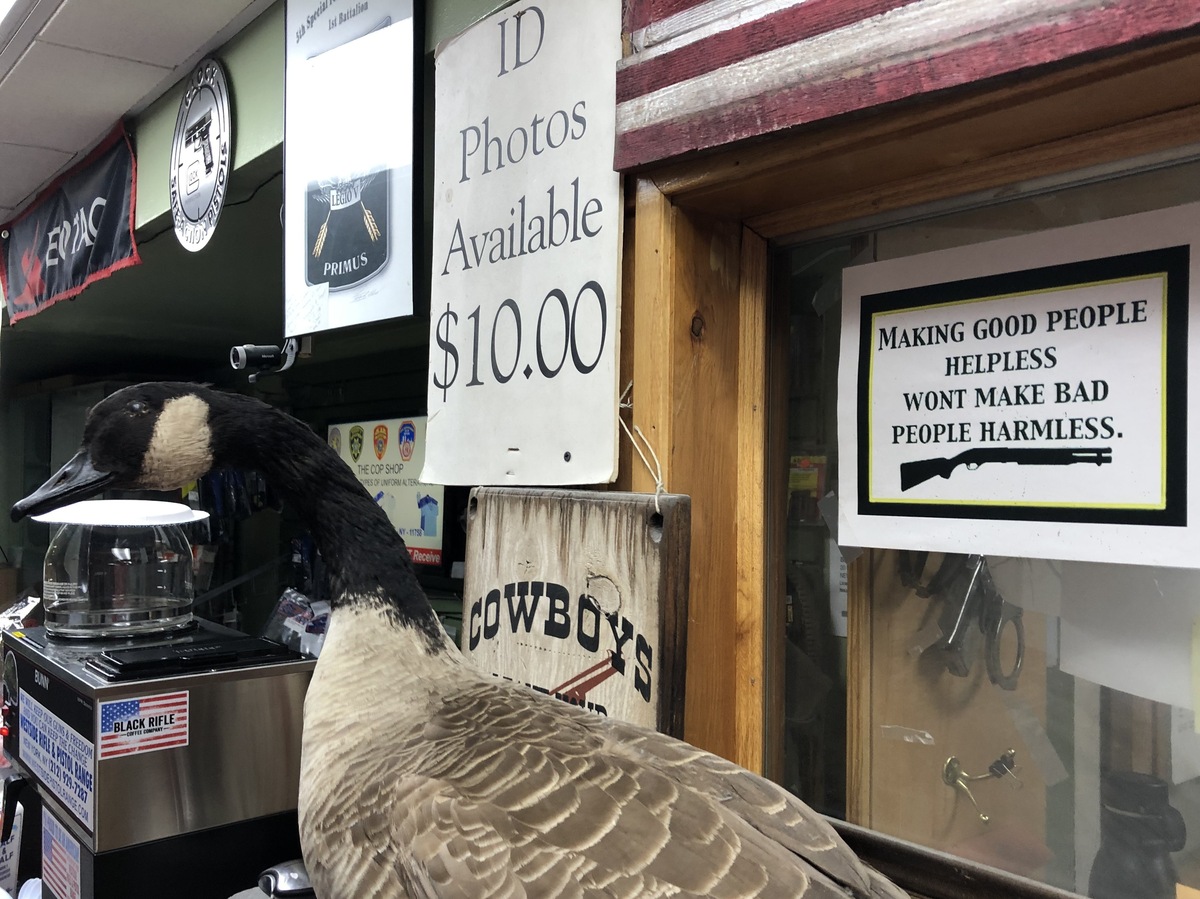 The Westside Rifle and Pistol Range in Lower Manhattan is one of the few places where it's legal to shoot a gun inside city limits.

Gun rights groups hope this case will give the new conservative majority of the Supreme Court a vehicle for rolling back New York's gun control laws. But the city repealed the gun-transportation laws at issue before the case reached the Supreme Court, a tactical move that may end up giving the rest of the city's gun laws a reprieve on technical grounds.

Still, gun groups think the city's strict laws are on borrowed time, given the highest court's new conservative majority and its sympathy for Second Amendment rights.

On the other side of this debate are the New Yorkers who believe that gun control is a must in the nation's biggest city. That's the attitude at NYPD headquarters.

"I guess there are purposes to have rifles and guns for hunting and everything," says Tom Galati, chief of the department's Intelligence Bureau. "But in an urban area, I don't think it's really safe to have a high-powered assault weapon here."

He says this as he looks at a color photocopy of an AK-47 rifle that police seized the day before. The commanders at One Police Plaza in Lower Manhattan are known for being obsessive about guns.

"Every morning, I'll get a sheet like this. It'll tell me the precinct, the person," says Galati. "Getting guns off the street is one of the number-one priorities of the NYPD."

And the uncontested reality is that guns are less a part of New York life than they are in other American cities. Not only is the murder rate far lower than rates in comparable urban areas, but the percentage of those murders committed with guns is lower. It's only 54%, according to an analysis of FBI data by Jeff Asher, a crime analyst and co-founder of AH Datalytics. On average, the share of murders committed by firearms in other big American cities is 80%.

2018 murders reported to the FBI's Supplementary Homicide Report vs % of murders committed via firearm for the 20 agencies with the most reported murders in 2018.

Average in these cities was 80% w/firearm, NYC stands alone at 54%. pic.twitter.com/EcwU0PH1I4

Those color photocopies at NYPD headquarters are sent in from places such as the 75th Precinct, in east New York. Sgt. Damon Martin runs the field intelligence office there, and the walls of his office are plastered with photos of the guns that he and his officers have seized.

"A lot of times, it's a good icebreaker when people come into the office," Martin says of the photos. "I think in the last four, five years, we've [recovered] close to 300."

Each picture is tagged with the legal basis for the seizure. On some it's "SW," for "search warrant," but often it just says "consent." That's an important technique for field intel officers, because that's what they do — they talk to people, sometimes people who've just been arrested, to find out who might have a gun. Then they try to get written consent to go find it. Intelligence work like this leads to about one-third of the NYPD's gun recoveries.

"I feel like I'm doing a gentleman's job. I feel good about it because I have great results. You see it — it's here on the wall," Martin says.

But here's the question: Does this kind of police work depend on the fact that New York makes it so hard to get a license and that legal guns are relatively rare?

All Martin can say is that right now, it's pretty simple for New York cops to figure out who should not have a gun.

"You have to be licensed through the [NYPD's] license division. And if you don't, you're illegally carrying a firearm," he says. "Especially people who have a gun license in, let's say, Georgia, and they relocated up here. Your gun license is no good!"

The city has a lot to lose when it comes to gun policy. It's considered something of a Cinderella story in the way it managed to bring down its murder rate over the past generation: Despite a recent uptick, the murder rate is still just one-fifth what it was in the early 1990s. City officials don't want to do anything that might jeopardize that record.

But it's important to remember that the city also had tough gun control when the murder rate was high.

"I don't think we know whether it is the gun laws in New York City or it is the enforcement of those laws or it is some third possibility that is driving the low rates of gun violence," says Thomas Abt, a senior fellow at Harvard Kennedy School and author of the book Bleeding Out.

"I would also point out that New York City also is a wealthy city. That puts a lot of resources, both in terms of enforcement and in terms of alternatives to enforcement, towards this issue," Abt says. 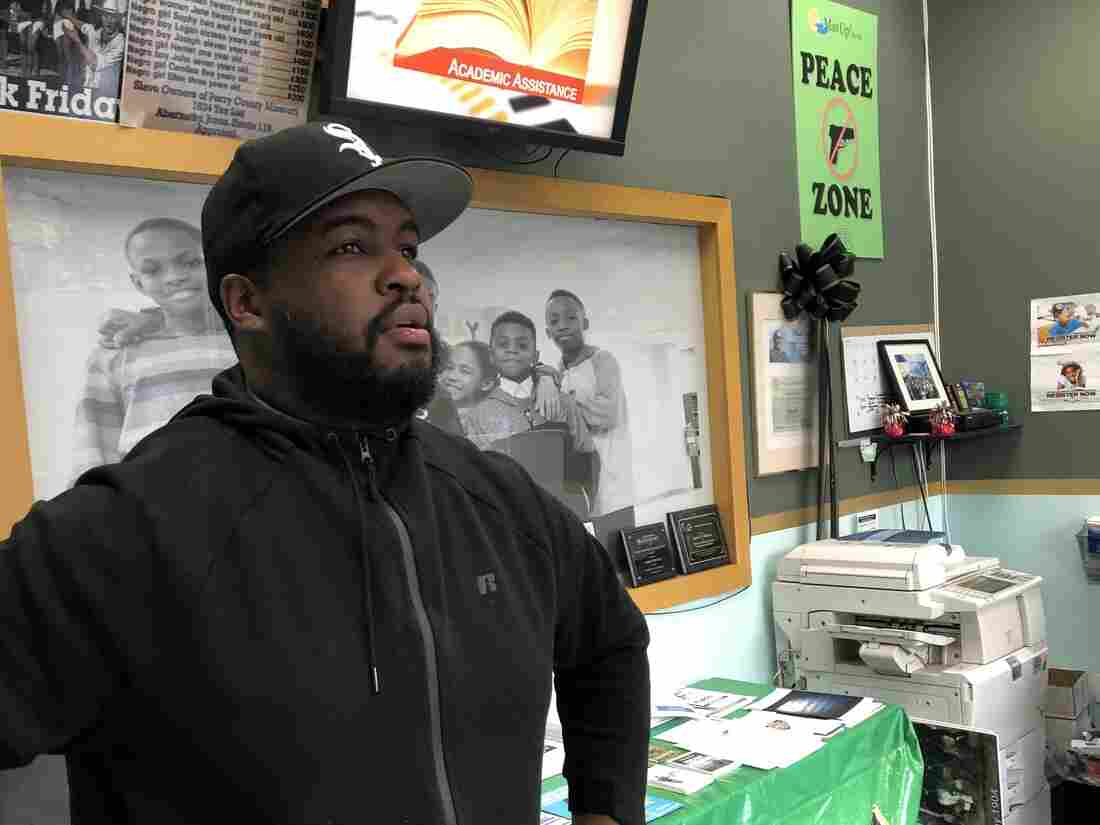 Timothy Washington, a counselor at the anti-violence nonprofit Man Up! Inc., in Brooklyn. The group tries to identify young people likely to get involved in violence and intervene before they do. Martin Kaste hide caption 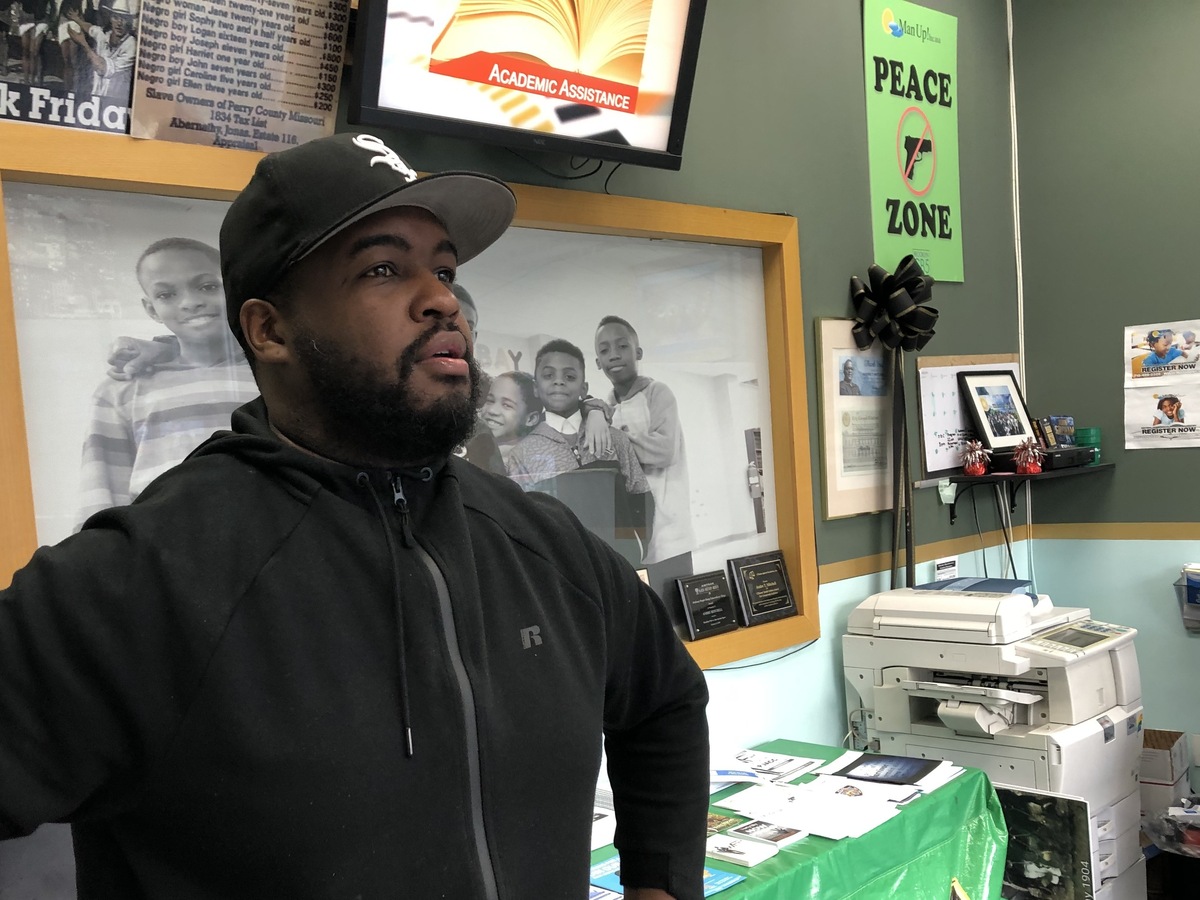 Timothy Washington, a counselor at the anti-violence nonprofit Man Up! Inc., in Brooklyn. The group tries to identify young people likely to get involved in violence and intervene before they do.

Among those who study crime, Abt says, there's often speculation that New York benefits from its reputation for being tough on guns, based in part on incidents such as the prosecution of football player Plaxico Burress. He was sent to prison after accidentally shooting himself in the leg with an unlicensed handgun while at a Manhattan nightclub in 2008.

"There is this notion that New York City as a whole treats guns and gun possession more seriously than other jurisdictions," Abt says. "I'm not sure we have the evidence to back that up as of yet."

Timothy Washington thinks there is something to the idea. He's a counselor with Man Up! Inc., a nonprofit in the east New York section of Brooklyn that tries to identify young people likely to get involved in violence and intervene before they do.

He says those young men are well aware of the city's strict gun laws.

" 'Oh, I could come right outside my house, police run down on me and, boom, I get five years on a first offense because I got a gun,' " is what he says he hears from them.

He thinks the city's reputation intimidates even legal gun owners from other jurisdictions.

"I know individuals with gun licenses and gun permits and they still won't take the chance to bring their guns to New York, because they just see how strict the gun laws are," he says. But if the city were forced to loosen its gun laws, "I feel like some people would be willing to take that risk."

That's just conjecture right now, but one that could be tested in practice if gun rights groups have their way in court.