Accessibility links
How The Senate Tried Clinton In A 'Respectable Way' Twenty-one years ago, GOP Majority Leader Trent Lott worked with his Democratic counterpart, Tom Daschle, to preserve the idea of the Senate as an impartial jury in the president's impeachment trial.

How The Senate Tried Clinton In A 'Respectable Way'

How The Senate Tried Clinton In A 'Respectable Way' 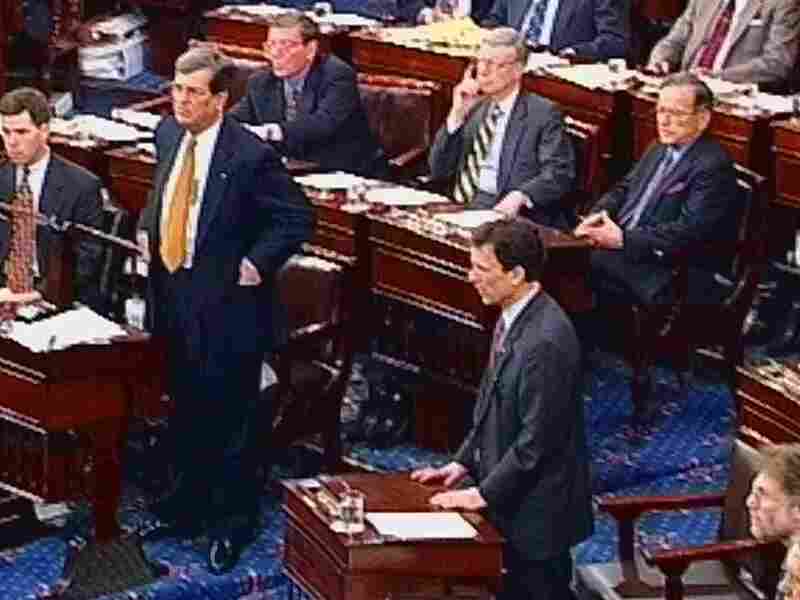 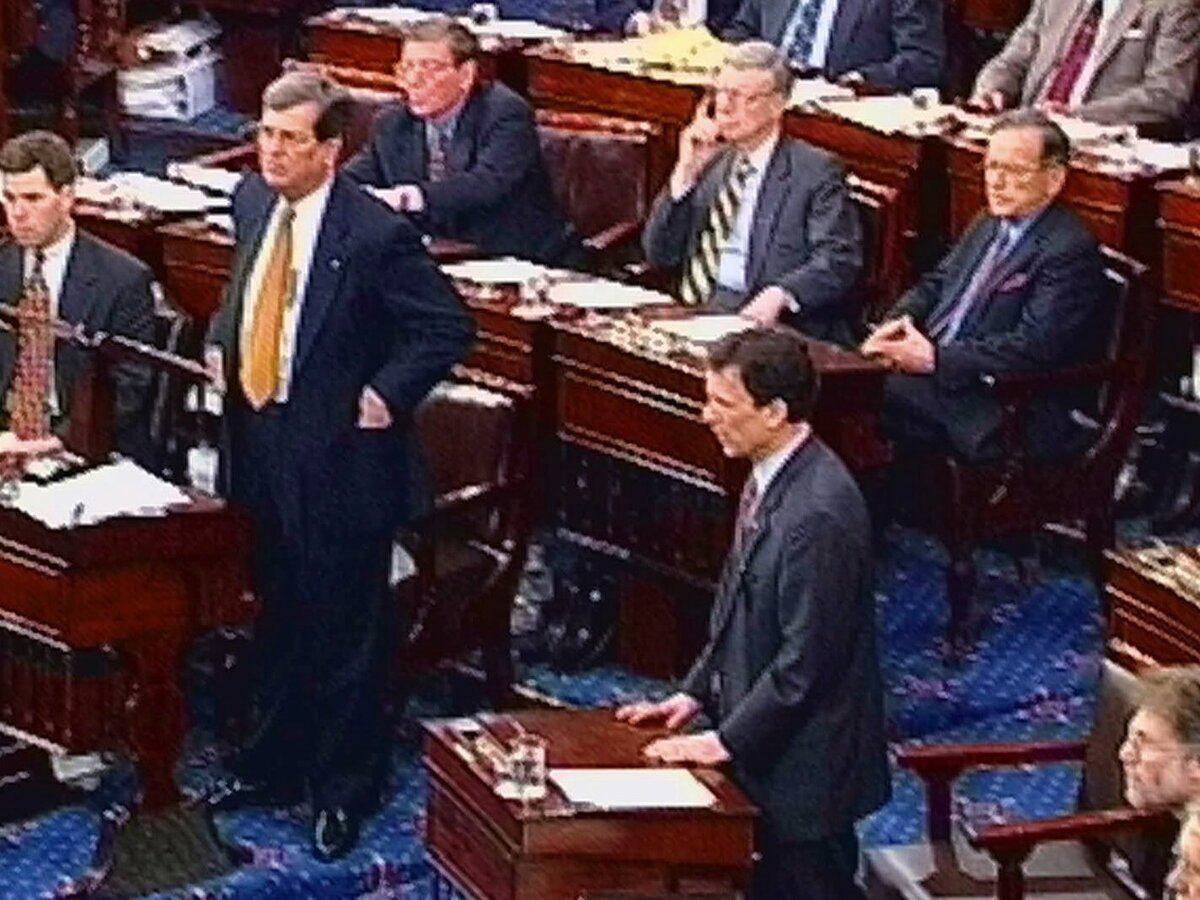 Senate Majority Leader Trent Lott and Minority Leader Tom Daschle, shown in this video image from February 1999, speak during the impeachment trial of President Bill Clinton on the Senate floor.

Twenty-one years ago Thursday, as the House approved articles of impeachment against President Bill Clinton, Senate Majority Leader Trent Lott was sitting in his study in Pascagoula, Miss., "looking out on a beautiful live oak tree." With a sigh, the Republican leader picked up the phone to call Senate Minority Leader Tom Daschle, his Democratic counterpart.

"Whether we like it or not, this is sitting in our lap," he told Daschle, "and we've got to figure out how to deal with it."

Lott was a skilled vote-counter.

"I knew the votes were not there and were never gonna be there to remove Bill Clinton," he says. "So what I had to figure out, working with Tom, was: How do we fulfill our constitutional responsibility in a respectable way?"

First, each staffer got a copy of the journal from the 1868 impeachment trial of President Andrew Johnson.

"The journal is a sports metaphor. It's an instant replay of the Senate," observes Marty Paone, who was Daschle's top aide on the Senate floor. "If the journal doesn't have it, it didn't happen." It is the shorthand version, later transcribed, of every agreement, every statement that occurs. And the journal of Andrew Johnson's trial became the guide for the trial of William Jefferson Clinton.

There were some modern additions, too: a direct Lott-Daschle hotline was installed so the two leaders could talk to each other at a moment's notice, and without anyone else involved. Throughout the process, they talked daily, sometimes hourly.

Now, remember, the Clinton impeachment in the Republican-dominated House had involved graphic sexual descriptions, and the House managers wanted to have Monica Lewinsky, the intern with whom Clinton had been sexually involved, testify on the floor of the Senate, and Clinton, too.

Lott was having none of it. "I just thought that was a precedent we should not set," he says. I "thought then and to this day think that the United States Senate is a unique place, which needs to be, you know, taken care of and preserved for posterity."

"Some of my best buddies did everything but stone me"

So he and Daschle initially proposed a two-week trial with no witnesses. Lott soon found he couldn't sell that to his caucus, however. "Some of my best buddies did everything but stone me and throw me out into the hall," he remembers.

Hoping for consensus on the rules, the two leaders arranged to have a closed-door Senate session in the historic Old Senate Chamber where the Senate met in the Capitol until 1859.

The chamber is usually used these days only for Senate leadership votes, and Lott and Daschle had each been elected there by a single vote. They both view the room as having almost magical properties. And that notion seemed to be borne out.

Without the public or press there to watch, the senators began to talk to each other in earnest. Republican Phil Gramm of Texas eventually outlined some of his ideas, and Democrat Ted Kennedy of Massachusetts seemed to embrace them.

A unanimous resolution on the initial rules

Not wanting to miss an opportunity, the two leaders declared victory and told their top aides to go write up the agreement.

That posed a bit of a problem for the soldiers in the field. "We went up to Lott's private offices in the Capitol with the leadership team and a bunch of lawyers," recalls former Daschle aide Paone. "I'm not a lawyer, but this is where I really realized the truth in that saying, 'First we kill all the lawyers.' " The lawyers "kept trying to get into all this granularity on calling witnesses" until Paone called Daschle, who came up and said, "No, we're not going there," Paone recalls. With that in mind, the group finally hammered out the agreement, knowing that later there would be changes.

It would pass the Senate unanimously. Later, when the House managers forced a vote on their motion to call witnesses to testify on the floor, the motion failed by a whopping 70-30. Instead, three witnesses — Lewinsky and two others — were deposed off-site, with the House managers and Clinton lawyers able to use video excerpts on the Senate floor.

As required by the Constitution, the chief justice presided over the proceedings, but he had little to actually do. Any ruling he made could be overruled by a majority vote of the Senate, and no important rulings were needed anyway. The presence of Chief Justice William Rehnquist, nonetheless, added a sense of gravitas to the occasion.

Under the rules, senators were supposed to attend all the sessions, sometimes eight hours a day and into the night, six days a week.

But they could not talk. They were essentially jurors but not participants. "They had to sit there in their uncomfortable seats and listen," Paone remembers.

"We were in our cocoons. And as time went on, the significance of it was so great, I felt that every breath I drew, I had to reassure myself, this is exactly how you feel about it," he recalls.

A contrast to Mitch McConnell

In contrast to the current Senate majority leader, both Lott and Daschle sought to preserve the notion of neutrality at the trial and tried to separate themselves from the White House.

That wasn't particularly difficult for Republican Lott, but Daschle was the Senate leader from the president's party. "I needed to keep a personal distance from the president, the White House," he says. "But you can't ignore the fact that there is a good deal of logistical and other coordinating requirements around a complicated experience like this."

In the end, there would be a total of four sessions behind closed doors — no public, no press — where the senators debated, often at night. "It was really remarkable how candid, how open, how much more forthcoming members were if they knew they didn't have to perform," Daschle recalls.

Besides the institutional goals of the two leaders, there were some other, perhaps less noble, goals. Lott had a 55-45 Senate majority, and enough Republicans facing tough races that he could lose the majority in the next election. Mitch McConnell today has a smaller majority than that.

Lott is loath to criticize McConnell, but he cautions that while the majority leader does have a lot to say about how the trial proceeds, if he "overplays his hand and doesn't have the support and cooperation of the Democratic leader, it'll make it tougher for everybody."

Paone, who served for nearly three decades as a Democratic floor aide in the Senate, says McConnell undoubtedly has some of the same thoughts that Lott did in 1999.

"He wants his members to get reelected," he says. "He wants to continue to be majority leader, and that's the prism he's going to view all this through."

And what does Chuck Schumer, the minority leader, want?

Lott and Daschle, though, are proud of what they did in 1999, and they say they grew closer through the experience.

Daschle says that Lott doesn't get "nearly enough recognition for the incredibly tough, tough decisions he had to make under enormous pressure to be more aggressive."

As a result, he says, the Senate "rose to the occasion, and I think that's what the American people expect when you face crises like this. Can an institution rise to the occasion and do what they're supposed to do?"