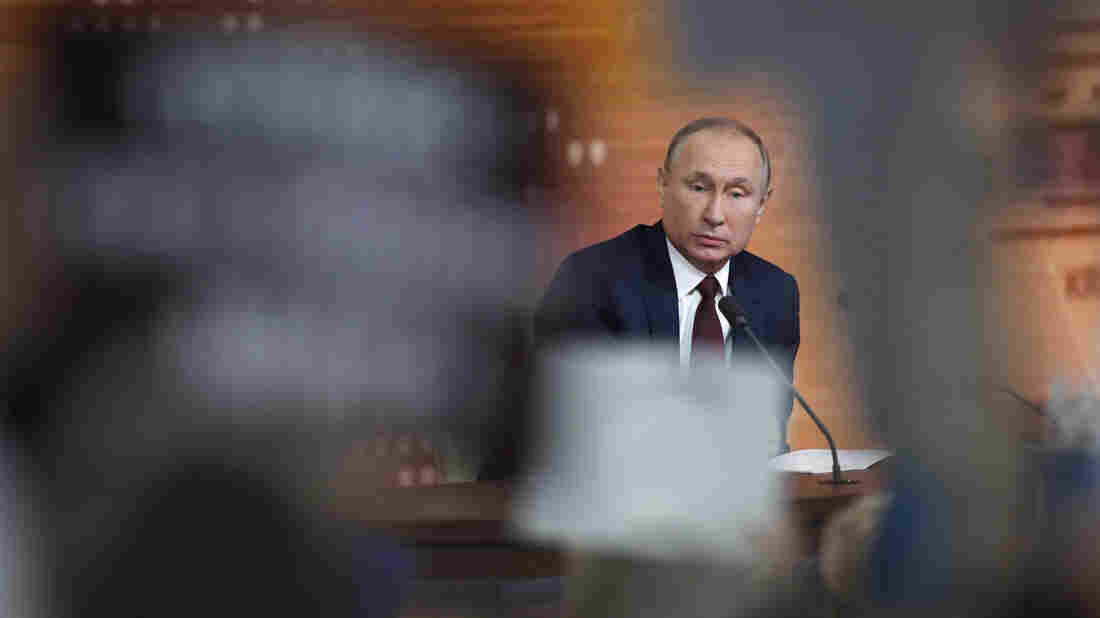 Russian President Vladimir Putin speaks Thursday during his annual news conference in Moscow. During the four-hour session, the longtime Russian leader called the U.S. impeachment process "far-fetched," making the prediction that Donald Trump will be acquitted in the Senate. Pavel Golovkin/AP hide caption 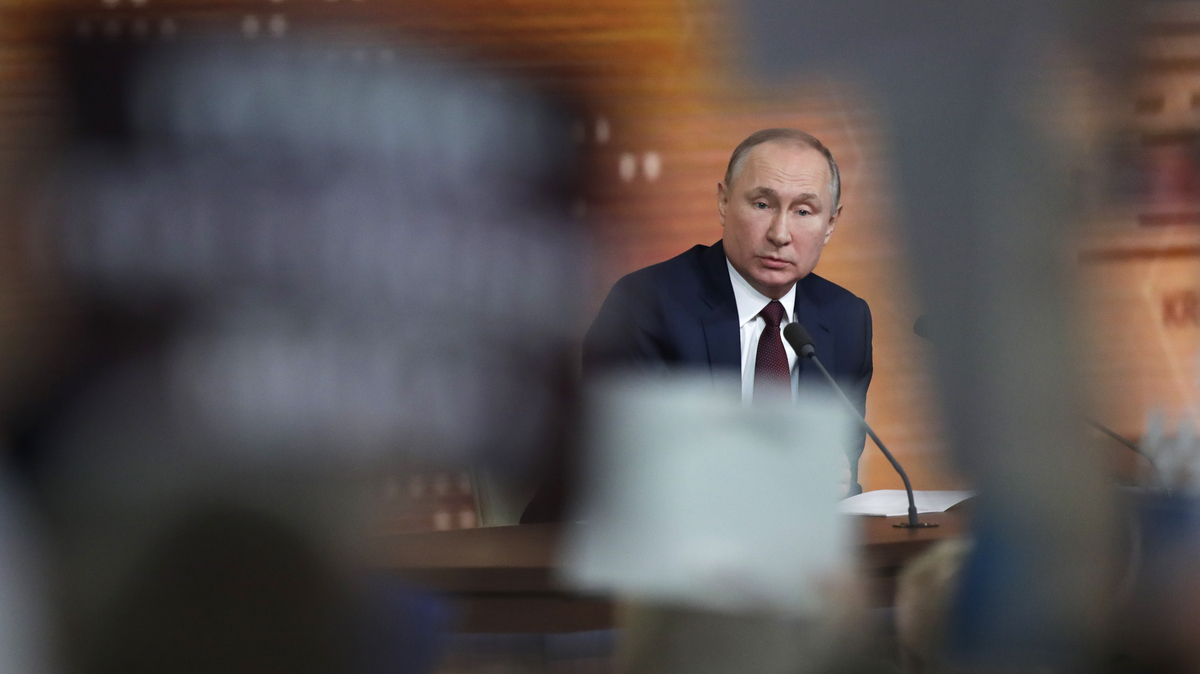 Russian President Vladimir Putin speaks Thursday during his annual news conference in Moscow. During the four-hour session, the longtime Russian leader called the U.S. impeachment process "far-fetched," making the prediction that Donald Trump will be acquitted in the Senate.

Halfway across the world from Washington, D.C., where President Trump on Wednesday became just the third president in U.S. history to be impeached, Trump's counterpart in the Kremlin made clear that he has the American president's back.

During his annual marathon news conference in Moscow, Russian President Vladimir Putin dismissed the charges against Trump as "completely made up."

"The Democratic party, which lost the elections, is now trying to revise this history through the means that they have at their disposal — first by accusing Trump of collusion with Russia. But then it turned out there was no collusion," Putin said Thursday during the hours-long event, echoing the arguments put forth by Trump and his Republican colleagues in Congress. "It could not form the basis for impeachment, and now there is this made-up pressure on Ukraine."

Trump faces the possibility of removal from office, after the House on Wednesday night approved two articles of impeachment — abuse of power, for withholding hundreds of millions of dollars in U.S. military aid to Ukraine, and obstruction of the congressional investigation into the matter. Every Republican voted against impeachment.

Now the process should head to the GOP-controlled Senate, where a trial is expected.

Putin said he believes the president's job remains safe because of his party's majority: "It's unlikely they will want to remove their party member from office based on what are, in my opinion, completely fabricated reasons."

Putin: Trump was impeached on completely contrived grounds, just a continuation of domestic infighting by Democrats, who lost election. First they accused Trump of colluding with Russia, now of pressuring Ukraine. pic.twitter.com/c8LIaCypZt

The comments came amid a marathon Q&A, an event that has become an end-of-year tradition during Putin's nearly two decades in power. He began holding them in 2001, and for roughly a decade each session has lasted more than four hours.

This year was no different, with a throng of journalists from around the world allowed to attend and put questions directly to the Russian leader. As in past years, the topics ranged widely — touching not only on world news such as American politics and Chinese relations, but also on local issues, such as high airfares to locations in the Russian far east.

Among the points Putin addressed was the matter of term limits, which do not allow a Russian president to serve more than two terms in a row. Putin famously slid into the role of prime minister between 2008 and 2012 for this reason, effectively leading the country as premier while his handpicked successor, Dmitry Medvedev, occupied the role of president.

He returned to office in 2012 and won reelection to a six-year term last year.

"One thing that could be changed about these terms is removing the clause about 'successive' [terms]," Putin said, suggesting an end to term limits, according to a Reuters translation.

The ban on serving more than two consecutive terms "troubles some of our political analysts and public figures," he added in a nod to supporters who want him to continue in office. "Well, maybe it could be removed."

Putin also addressed the simmering diplomatic dispute between Russia and Germany over the murder of a former Chechen insurgent commander in Berlin. Earlier this month German authorities ordered the expulsion of two Russian diplomats, alleging the Kremlin's involvement in Zelimkhan Khangoshvili's killing, and a defiant Russia retaliated by expelling a pair of German diplomats in turn.

Asked about the situation, Putin did not directly deny Russia's role in the murder, instead electing to voice his anger that Khangoshvili, who had been seeking asylum in Germany, was able to walk freely on the streets of Berlin despite his

Putin passed up opportunity to deny Russian role in killing of former Chechen commander in Germany, instead expressing outrage that he walked freely on streets of Berlin despite his prominent involvement with Chechen separatists.