Accessibility links
Few Asylum-Seekers Winning Cases Under 'Remain In Mexico' Program A little more than 100 migrants out the of tens of thousands who've arrived at the southern border in recent months have been granted protection. 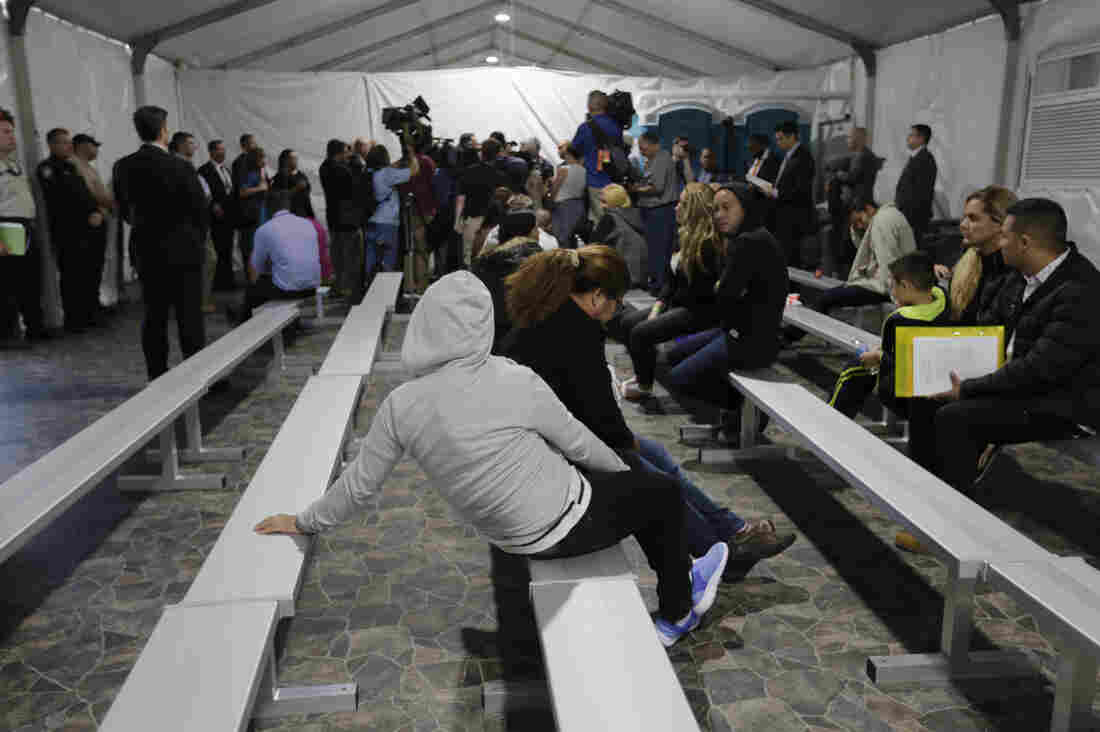 Migrants applying for asylum in the United States go through a processing area at a new tent courtroom at the Migration Protection Protocols Immigration Hearing Facility in Laredo, Texas, in September. Eric Gay/AP hide caption 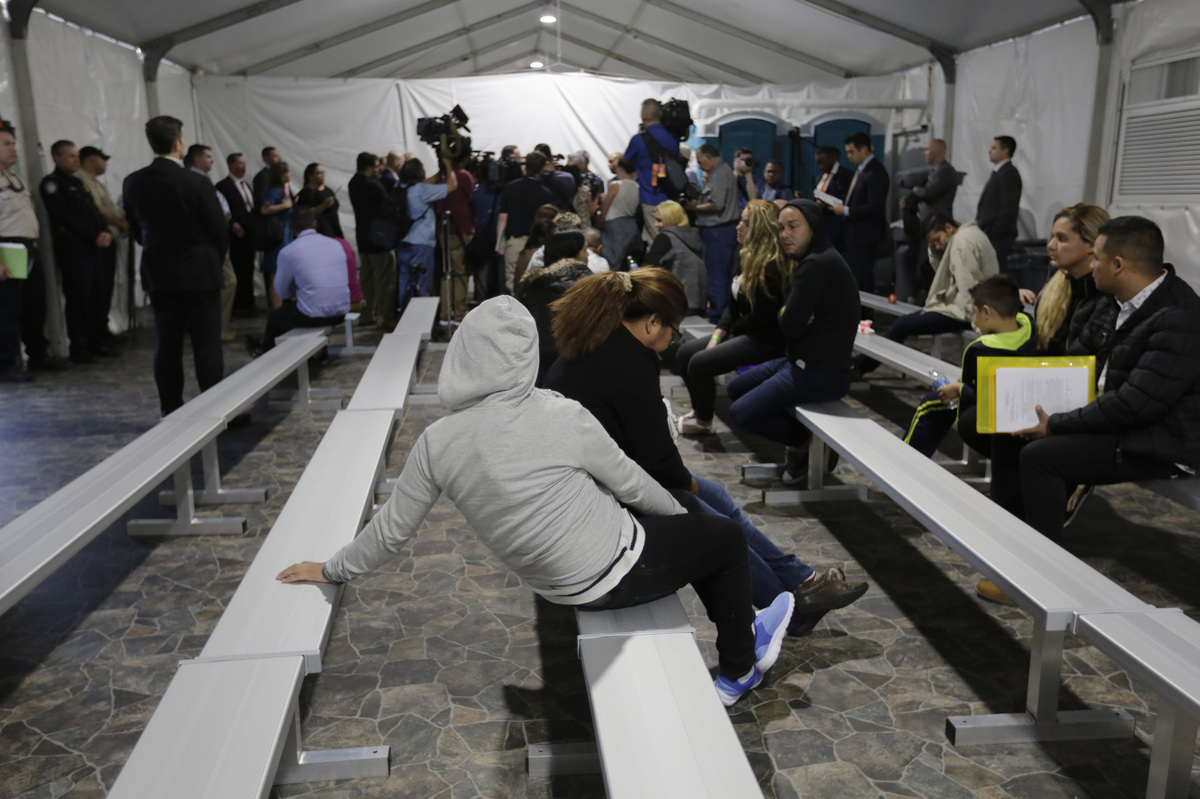 Migrants applying for asylum in the United States go through a processing area at a new tent courtroom at the Migration Protection Protocols Immigration Hearing Facility in Laredo, Texas, in September.

It was never easy for migrants to win asylum cases in U.S. immigration courts. But now, it's nearly impossible.

Out of tens of thousands of migrants who have arrived at the southern border in recent months, just 117 have been granted protection by a judge. That's according to the latest immigration court data released Thursday by the TRAC Immigration project at Syracuse University.

The U.S. asylum system has been upended by the Remain in Mexico program, also known as the Migrant Protection Protocols. More than 55,000 migrants have been told to wait in Mexico under the program, according to U.S. Customs and Border Protection. The court data released Thursday show that about 24,000 of their cases had been completed as of Nov. 19.

The success rate is less than 1%.

"It's very clear at this point that the design of the program is to basically eviscerate asylum law as we know it," says Jodi Goodwin, a longtime immigration lawyer in Harlingen, Texas.

Immigrant advocates say this is what the Trump administration wanted when it implemented the Remain in Mexico program.

Migrants who are forced to wait in Mexico are stressed by the time they're allowed into the U.S. for court, says Lynn Stopher, a staff attorney with the National Immigrant Justice Center. She describes seeing her client at a hearing last week in Laredo, Texas.

"She's had nothing to eat. She's also exhausted, physically and emotionally," Stopher said. "And she's expected to testify about the most traumatic experiences of her life to a video camera."

Stopher's client and young daughter spent the night before the hearing on the international bridge in Nuevo Laredo, Mexico. They had no choice, Stopher says, as the migrant shelters in town refuse to unlock their doors until the light of day because it's notoriously dangerous outside, and the family had to report to U.S. authorities on the bridge by 4:30 a.m. 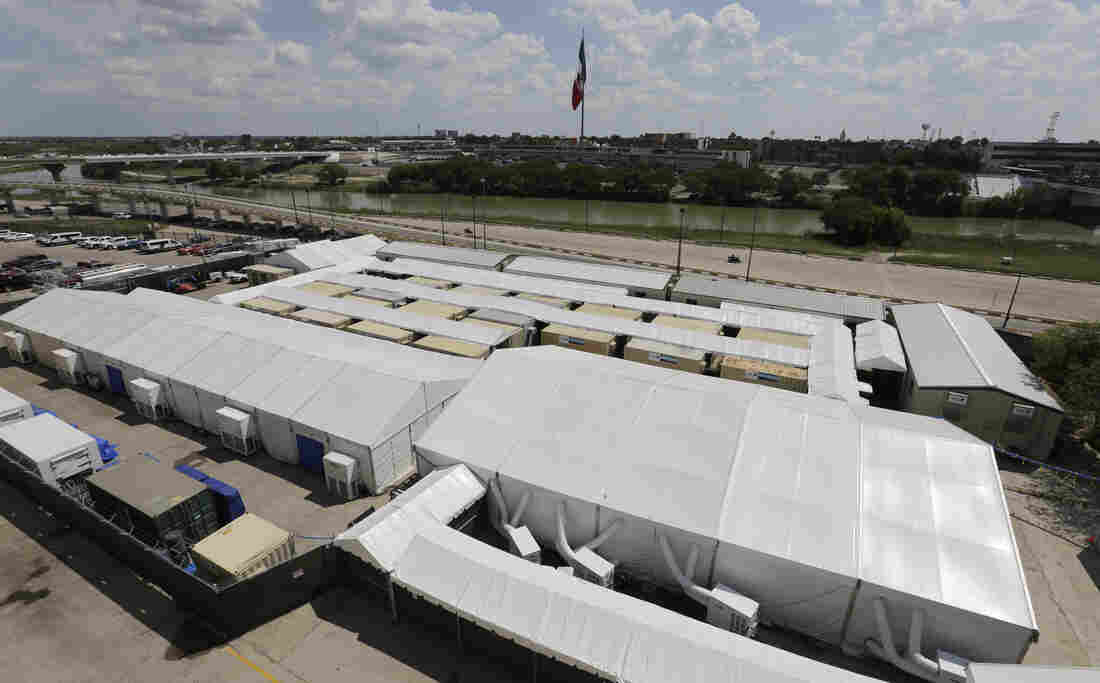 The Migration Protection Protocols Immigration Hearing Facility in Laredo is made up of tents and portable pods along the Rio Grande. Immigrant advocates say the Remain in Mexico program is designed to eviscerate asylum protections for migrants. Eric Gay/AP hide caption 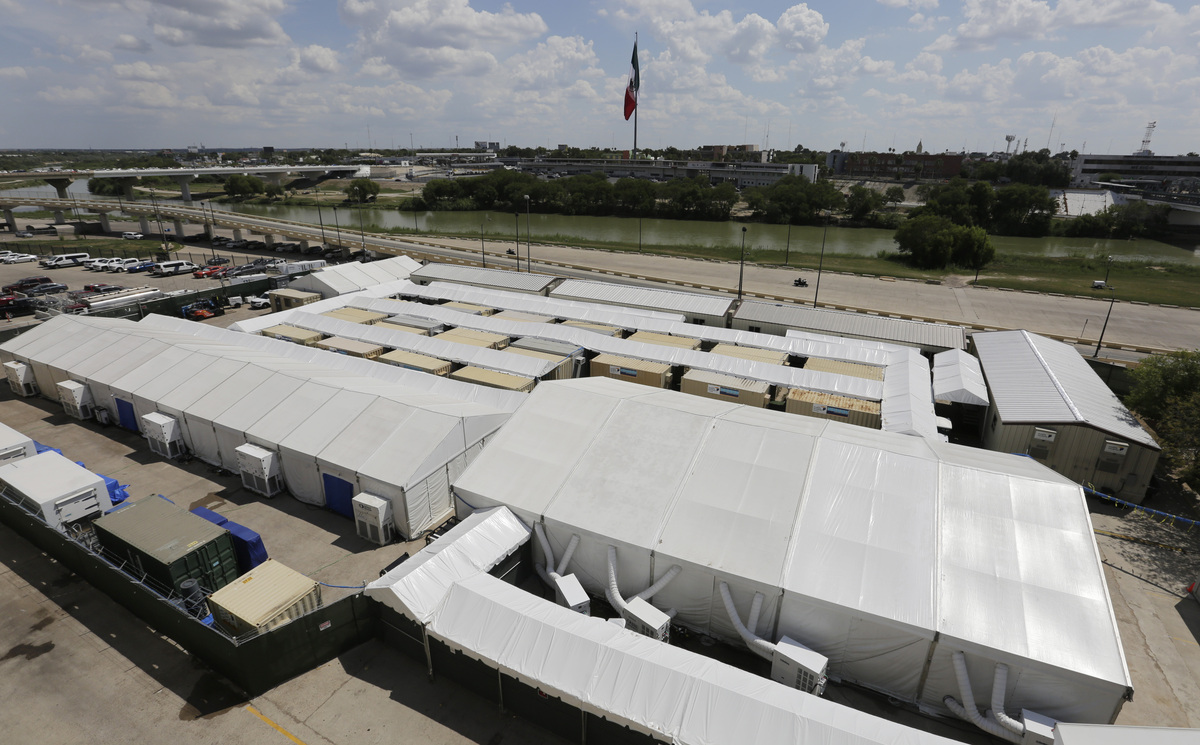 The Migration Protection Protocols Immigration Hearing Facility in Laredo is made up of tents and portable pods along the Rio Grande. Immigrant advocates say the Remain in Mexico program is designed to eviscerate asylum protections for migrants.

From there, the mother and daughter were escorted to temporary tent courts just across the border in Laredo, where judges preside via video link from hundreds of miles away in San Antonio.

"They appear very overwhelmed," says Ilyce Shugall, a former immigration judge and one of a small band of observers who are observing these proceedings in San Antonio.

Shugall says judges are also stressed. They're doing their best to juggle a flurry of new Trump administration policies, court rulings and a huge volume of cases. But she says they're making mistakes.

"The judges are just trying to get through their dockets," Shugall says. "They just don't have time to think. And that's a problem."

The Trump administration argues that Remain in Mexico is a big reason the number of migrants arriving at the southern border is down sharply over the past six months.

"The message is clear," said Mark Morgan, the acting commissioner of U.S. Customs and Border Protection, at a news conference in Washington earlier this month.

"They will no longer be allowed to exploit our laws. And to be allowed into our country based on fraudulent claims," Morgan said. "Those loopholes have been closed."

Morgan says the administration is working with the Mexican government to ensure a quote "safe, secure environment" for migrants. But at the same time, Morgan said, "if somebody is abused, if somebody is exploited, there's only one individual who's to blame for that. And that's the smuggling organizations, the cartels who are doing the exploitation, and abusing these people."

Immigrant advocates say this lack of security in Mexico is the primary reason Remain in Mexico is making it harder to get asylum in the U.S. Advocates say the one individual to blame for that is President Trump, for sending migrants back to some of the most dangerous cities in the world.

"They are kidnapped. They are attacked. They are raped," said Rebecca Gendelman, an advocate with Human Rights First. The nonprofit organization has documented more than 600 violent crimes against migrants in the Remain in Mexico program, including at least one murder.

Thousands of asylum-seekers aren't showing up for court. Immigrant advocates say some have been kidnapped. Others are so scared they've gone home. Gendelman describes one hearing she observed in San Antonio, where a migrant from Honduras told the judge she had already been kidnapped once and begged him to deport her.

"She said, 'Both my life and my son's life are in danger,' " Gendelman recalled. "And then the woman said, 'I want to go back to Honduras, because if something happens to me there, at least I have my family. But here it's just myself and my son and God.' "

The second reason it's so hard to get asylum under Remain in Mexico has to do with judges. The program funnels these asylum cases to some of the toughest judges in the country. Immigration courts near the border grant far fewer asylum claims than other courts, such as San Francisco or New York.

The third reason, advocates say, is lack of access to legal counsel. Only 4% of migrants in Remain in Mexico have found lawyers, according to the latest court data. Few lawyers are willing to travel to Mexico to take on these cases — and those who are willing say the administration has made it difficult to meet with their clients.

"I usually only have like maybe 15 or 20 minutes to be able to talk to my clients before court," Goodwin says. "And in addition they don't allow you to see your clients after court. They really don't want lawyers to be in that facility."

The Justice Department, which runs the immigration courts, declined to comment for this story — except to say that a new wrinkle is coming next month. A group of immigration judges in Fort Worth, Texas, will begin hearing Remain in Mexico cases from the tent courts via video. And like the tent courts, these proceedings will be closed to outside observers.