Accessibility links
Trump Tax Cuts Have Failed To Deliver On GOP's Promises The president said it would be "rocket fuel for our economy," but the Republican tax cut passed in 2017 did not pay for itself as promised — nor did it deliver a sustained boost to growth. 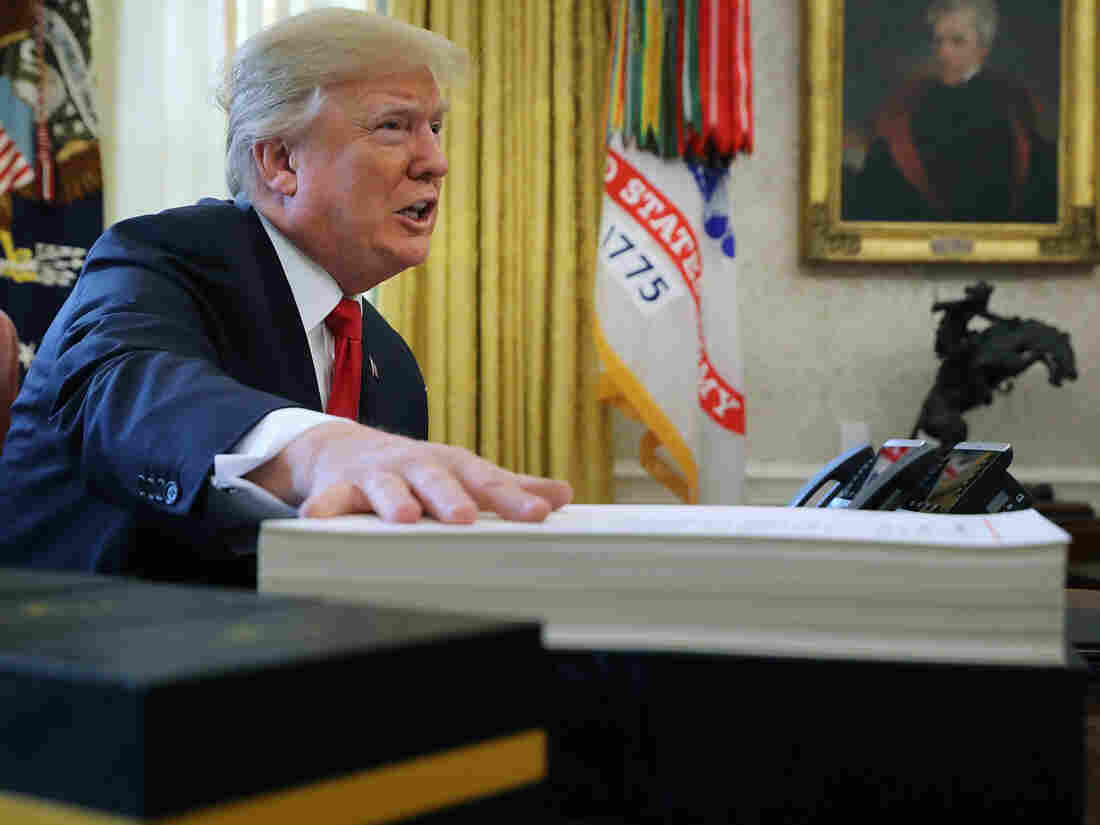 President Trump prepares to sign the tax legislation in the Oval Office on Dec. 22, 2017. The GOP tax cut did not pay for itself, as promised, nor did it deliver a sustained boost to economic growth. Chip Somodevilla/Getty Images hide caption 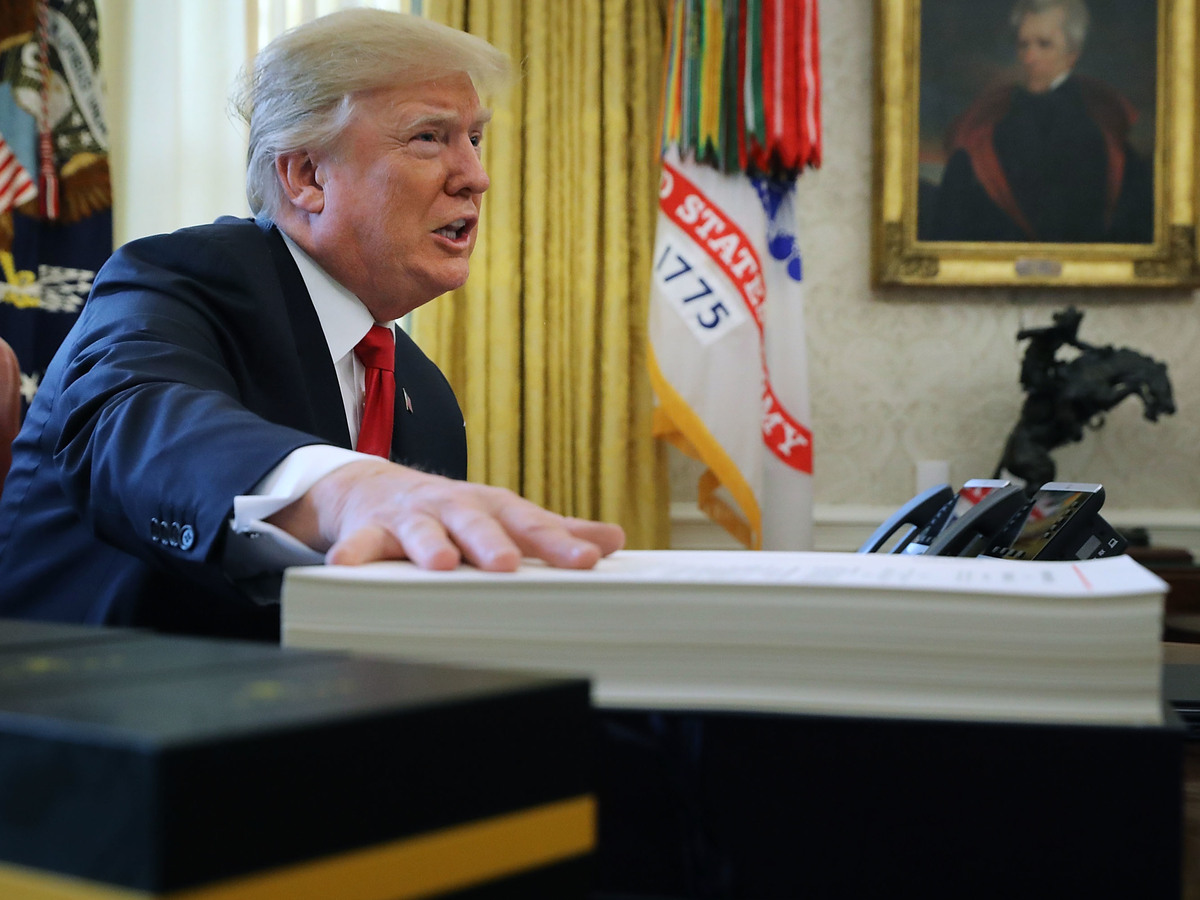 President Trump prepares to sign the tax legislation in the Oval Office on Dec. 22, 2017. The GOP tax cut did not pay for itself, as promised, nor did it deliver a sustained boost to economic growth.

Two years ago Friday, Republicans in Congress passed a sweeping tax cut. It was supposed to be a gift-wrapped present to taxpayers and the economy. But in hindsight, it looks more like a costly lump of coal.

Passed on a party-line vote, the tax cut is the signature legislative accomplishment of President Trump's first term. He had campaigned hard for the measure, promising it would boost paychecks for working people.

"Our focus is on helping the folks who work in the mailrooms and the machine shops of America," he told supporters in the fall of 2017. "The plumbers, the carpenters, the cops, the teachers, the truck drivers, the pipe-fitters, the people that like me best."

As Growth Slows, The Economy Is Falling Short Of Trump's Target

In fact, more than 60% of the tax savings went to people in the top 20% of the income ladder, according to the nonpartisan Tax Policy Center. The measure also slashed the corporate tax rate by 40%.

"It will be rocket fuel for our economy," Trump promised.

Boosters of the tax cut insisted the economy would grow so fast, it would more than make up for the revenue lost to lower rates.

"The tax plan will pay for itself with economic growth," Treasury Secretary Steven Mnuchin said.

It hasn't worked out that way.

"It was unbelievable at the time, and it's proven to be absolutely untrue," said Maya MacGuineas, president of the Committee for a Responsible Federal Budget. "The tax cuts were never going to — and have not — come anywhere close to paying for themselves."

Corporate tax revenues fell 31% in the first year after the cut was passed. Overall tax revenues have declined as a share of the economy in each of the two years since the tax cut took effect.

"Not surprising, if you cut taxes, you get less in revenues," MacGuineas said. "And what we've been doing at the same time is we've been increasing spending. And no surprise, our deficit has exploded."

The federal deficit this year was $984 billion — an extraordinary figure at a time when the country is not mired in recession or widespread war.

The tax cut also failed to produce a permanent boost in economic growth, despite promises from Republican supporters.

"After eight straight years of slow growth and underperformance, America is ready to take off," Senate Majority Leader Mitch McConnell said when the tax cut passed two years ago.

The tax cut, along with increased government spending, did give a short-term lift to the economy and businesses temporarily boosted investment. But the rocket fuel burned off quickly. Business investment declined in the last two quarters.

"There was an acceleration in terms of momentum for business investment, but it was rather short-lived," said Gregory Daco of Oxford Economics. "A year further down the road, we're really not seeing much of any leftover of this fiscal stimulus package."

Hampered in part by the president's trade war, the economy is projected to grow only about 2% this coming year. That's below the administration's target of 3% and slightly below the average growth rate since 2010.

To be sure, the stock market is booming, and unemployment is near record lows. But while most Americans give the economy high marks, that doesn't extend to the tax cut. A Gallup Poll last tax season found only about 40% of Americans approved of the cut while 49% disapproved.

Even though experts say most workers did get a bump in their take-home pay, it was largely invisible to many taxpayers. Only about 14% of those surveyed by Gallup believe their taxes went down. (That figure includes 22% of Republicans, 12% of Democrats and 10% of independents.)

"For millions of middle-class Americans, it is not a very happy anniversary," said Sen. Ron Wyden, D-Ore.

Wyden, the top Democrat on the Senate Finance Committee, said while wealthy Americans are celebrating their tax savings from the past two years, working people feel like an afterthought.

Perhaps it's an acknowledgement of that sentiment that the president is now talking about another round of tax cuts, after the 2020 election. "We're going to be doing a major middle-income tax cut, if we take back the House," Trump promised in November.

The president made similar promises before last year's midterm election. But the follow-up to his 2017 tax cut never materialized.