Accessibility links
Acquiring Private Land Is Slowing Trump's Border Wall In South Texas, there's skepticism that President Trump will get the 450 miles of wall he wants by Election Day. Construction is behind schedule because of how difficult it is to take private land. 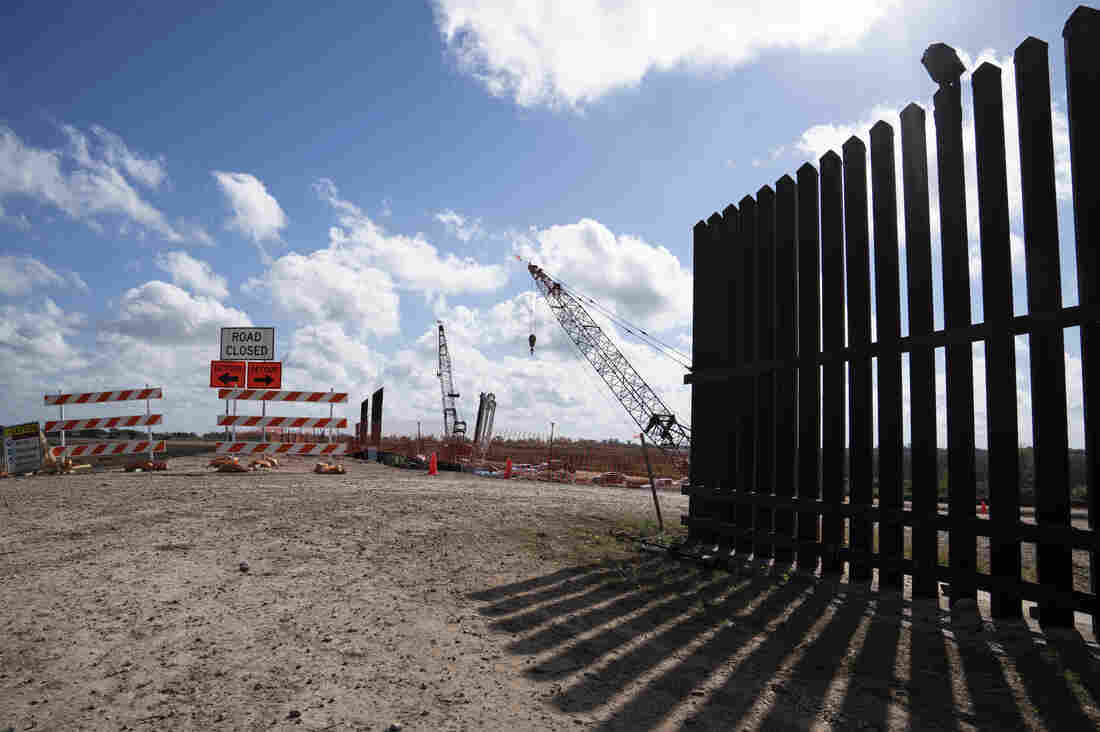 The existing border wall (right) is seen near the construction site of new wall panels south of Donna, Texas, on Nov. 20. There is widespread skepticism on the border that President Trump will get anywhere near the 450 miles of wall he wants by next November. Verónica G. Cárdenas for NPR hide caption 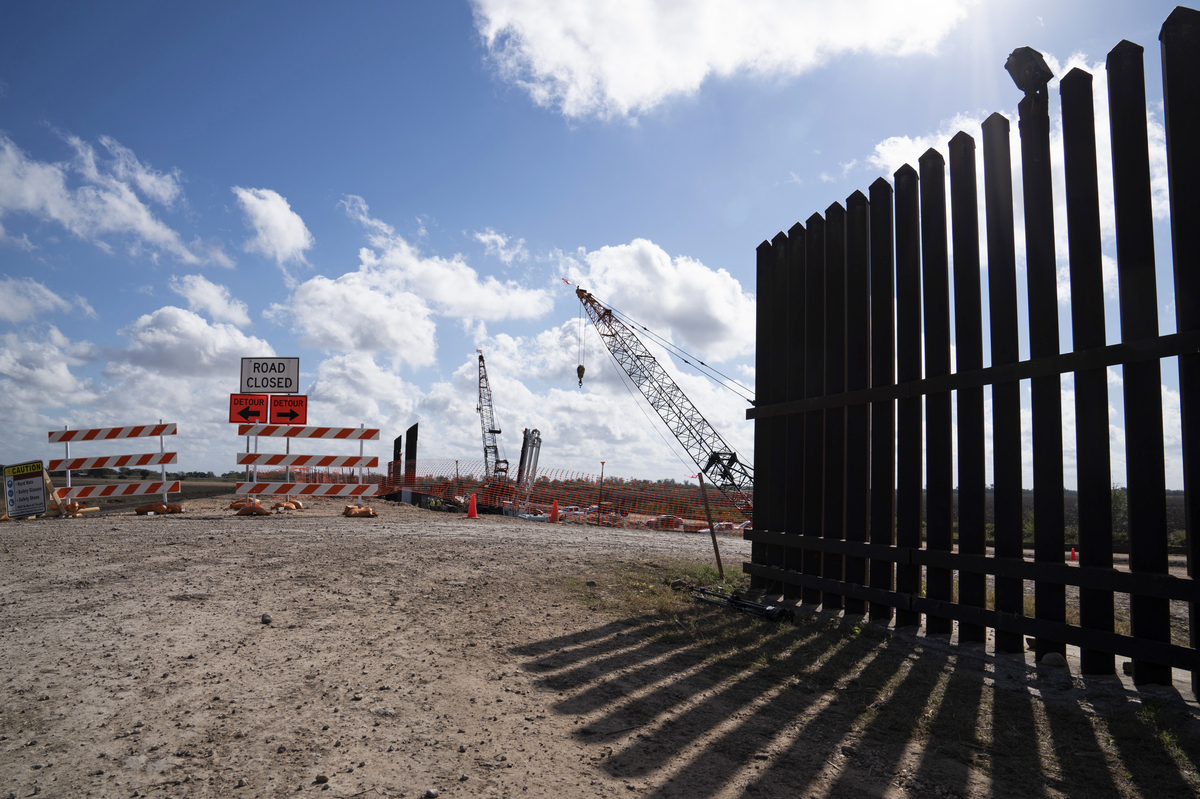 The existing border wall (right) is seen near the construction site of new wall panels south of Donna, Texas, on Nov. 20. There is widespread skepticism on the border that President Trump will get anywhere near the 450 miles of wall he wants by next November.

"We are on track to build 450 to 500 miles of new wall by the end of 2020," he told reporters. Behind him, steel panels atop a concrete levee wall, 30 feet in all, are rising from the sugar cane fields and bird sanctuaries of the valley — which is really a river delta. They are the first section of new border wall built under President Trump where there was no barrier before.

But that swaggering Washington confidence is not shared down on the border. Asked about Trump's Election Day deadline, Carmen Qualia, an assistant chief with the Border Patrol, acknowledged it's slow going.

"[Trump] said, 'Hey, here's my deadline, here's what I need you to do.' So we're gonna continue to work towards meeting that deadline," said Qualia, who is in charge of the Rio Grande Valley wall team. "And we're either going to make it or not."

Trump gets an additional $1.4 billion toward his massive wall along the 2,000-mile southwest border under a government spending bill he is expected to sign. But in Texas, there's widespread skepticism the president will have anywhere near the 450 miles of wall he wants by next December. Construction has already fallen behind schedule because of how difficult it is to take private land. 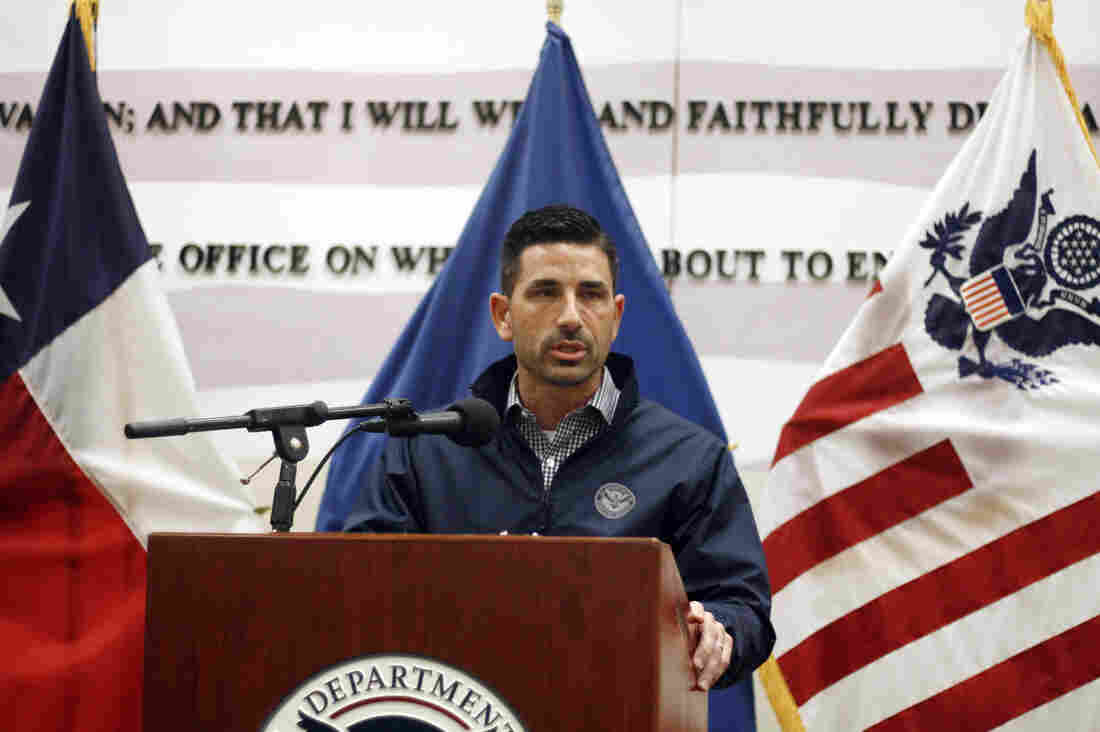 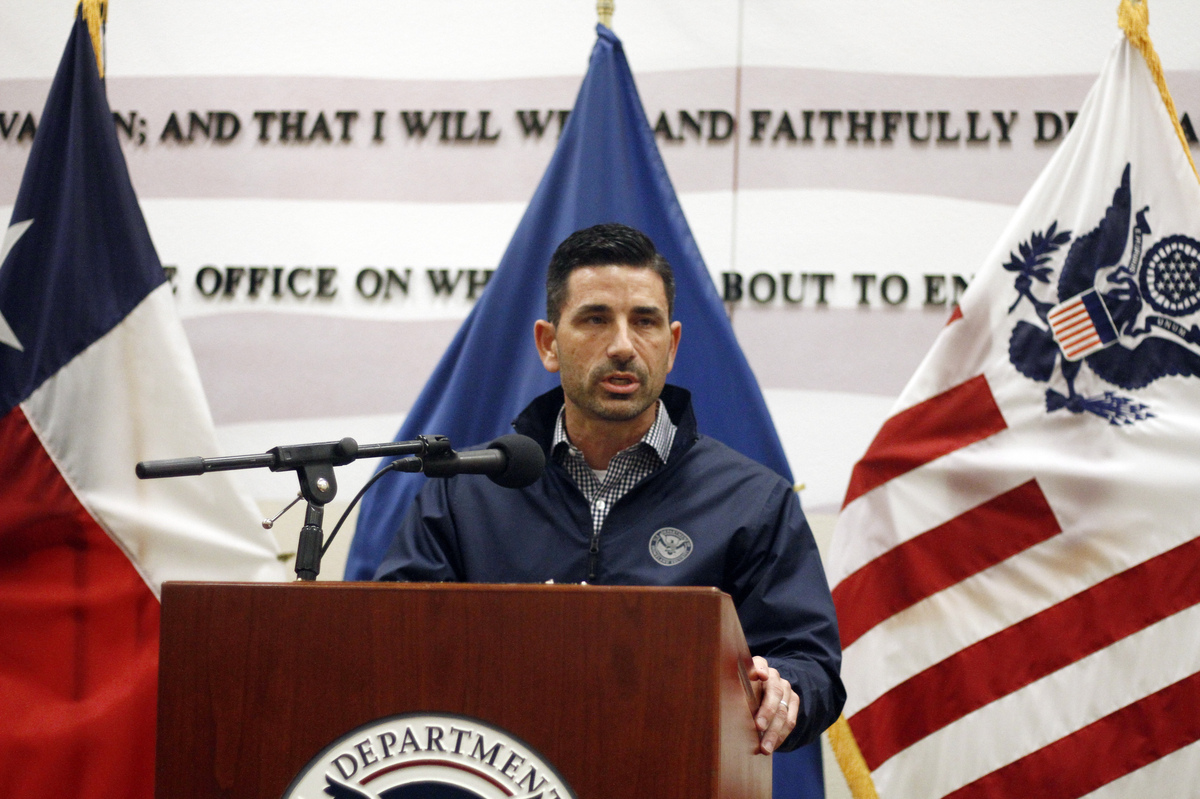 One contract reviewed by NPR, called RGV10, says construction isn't expected to begin on certain wall segments until March 2021 — well after the election.

"If you don't have 12 months to acquire property, you're cutting it way too short," said Hyla Head, a former real estate specialist with the U.S. Army Corps of Engineers who spearheaded land acquisition for the first phase of wall-building under President George W. Bush in 2008.

Customs and Border Protection, which is part of Homeland Security, doesn't yet own most of the land where it plans to build the wall. In fact, Wolf's photo op was staged on a half-mile section of the levee that was only recently acquired by the federal government. Hidalgo County land records show that much of the property needed to complete that stretch of wall is still in private hands.

Disorderly property records, complications with landowners and a cumbersome condemnation process have slowed progress to a snail's pace. That's despite an army of federal land specialists trying to rush the process to please the president.

Consider this: The government plans to erect 110 miles of the total 450 miles of barriers in the Rio Grande Valley. But as of last week, the feds still needed to acquire about 90 miles from private landowners. In fact, since January 2017 the administration has only taken three miles from private owners in the Rio Grande Valley, according to a CBP spokesperson.

"It's a big project," Qualia said. "We're gonna continue to do what we can to make it happen."

But she says agents want the tall wall, along with floodlights, sensors, cameras and a 150-foot-wide enforcement zone to combat drug and human trafficking.

Most of the borderlands in Texas are privately owned, unlike states to the west where a strip along the border is mostly federal property. 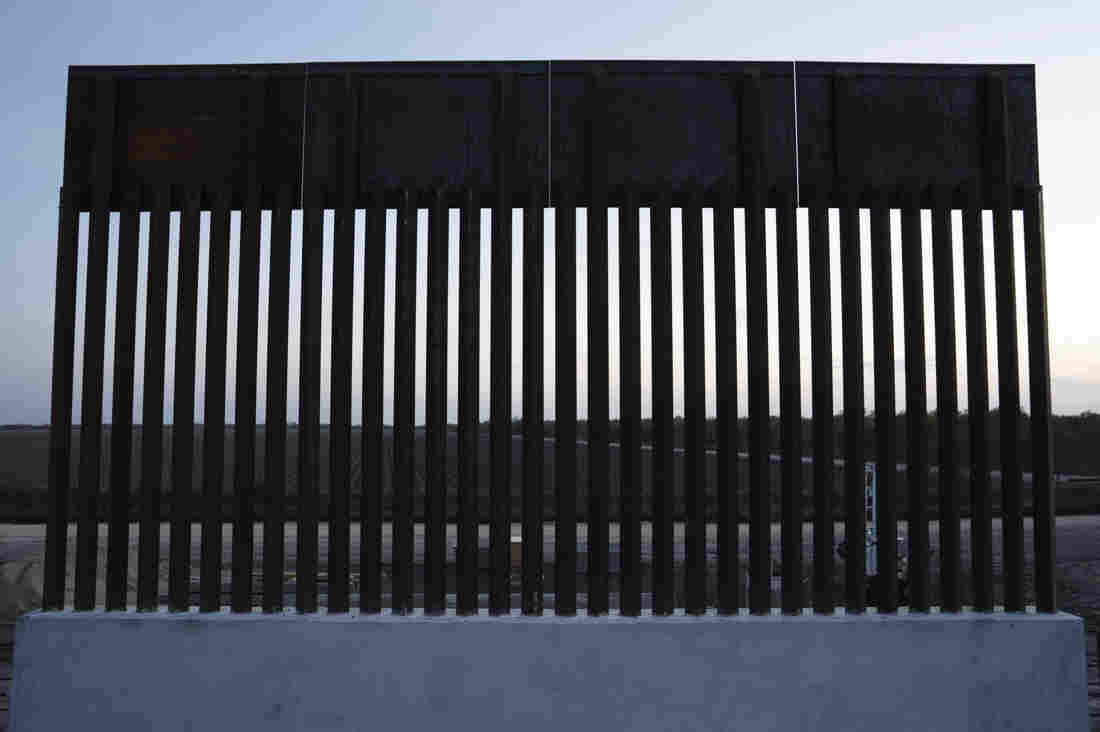 A section of the new 18-foot border wall is built in Donna, Texas. The new wall construction is already falling behind schedule because of the difficulty of acquiring private land. Verónica G. Cárdenas for NPR hide caption 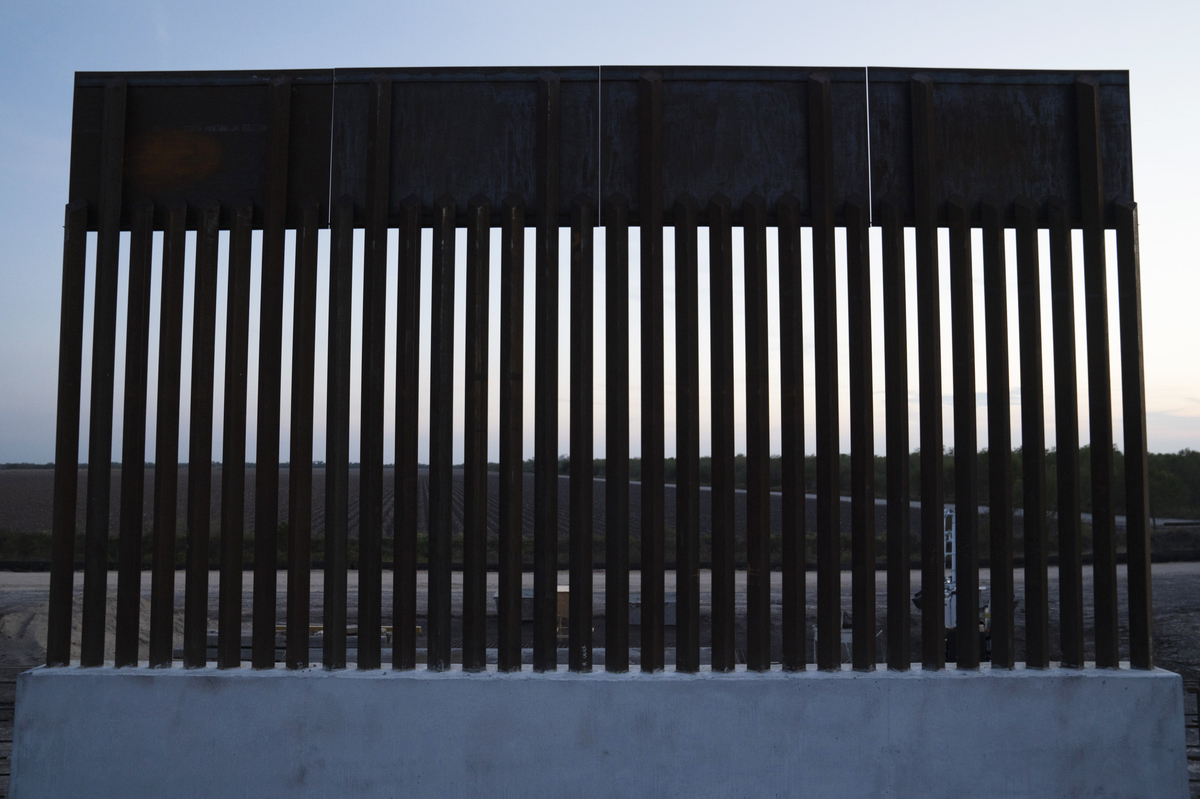 A section of the new 18-foot border wall is built in Donna, Texas. The new wall construction is already falling behind schedule because of the difficulty of acquiring private land.

"Every project that has real estate acquisition is prevented from making faster progress," said a senior manager with detailed knowledge of wall building in the Rio Grande Valley who is not authorized to speak publicly.

Under eminent domain, the government can take private property for public use, but it has to pay for it. And that process is laborious and legalistic.

"Federal entities that acquire property have a process," said Head. "You may not like it, but this is tried and true. We have laws to protect property owners."

Roy Brandys, an eminent domain lawyer in Austin, Texas, has long experience representing border clients. Asked about completing the border wall in the valley by next December, he said, "That would be a very aggressive schedule, very difficult to get accomplished just because of all the different issues that properties have."

Each step of the process is proving problematic. First, the government has to identify and make contact with each property owner.

In Starr County, at the western end of the Rio Grande Valley, the government is planning 52 miles of border wall. Ultimately, the administration will need to acquire acreage on hundreds of individual parcels. So far, the wall contractor has broken ground only in one unit owned by the U.S. Fish and Wildlife Service.

"It's very difficult to know who the rightful owners are. That's the biggest challenge," said Rosalva Guerra, the chief appraiser of Starr County, where property records are notoriously incomplete. 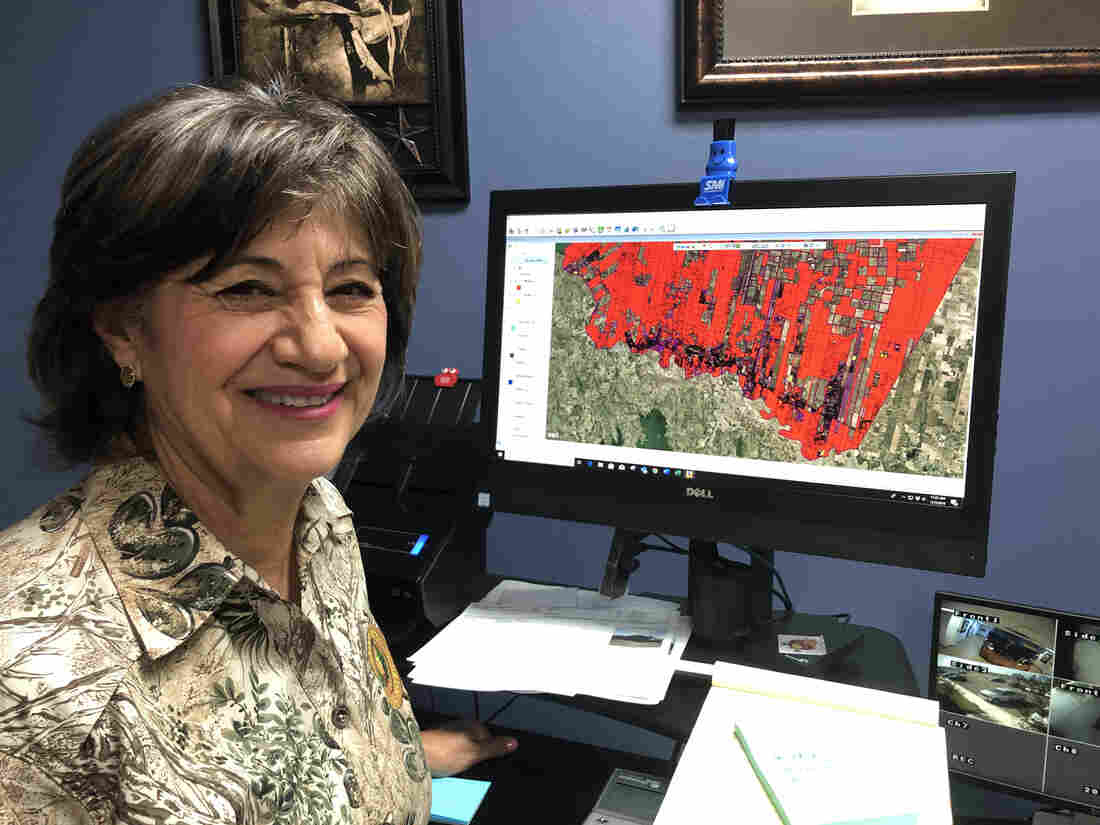 The computer screen of Starr County Chief Appraiser Rosalva Guerra is awash with red. These are properties where the county is unsure of the owner. John Burnett/NPR hide caption 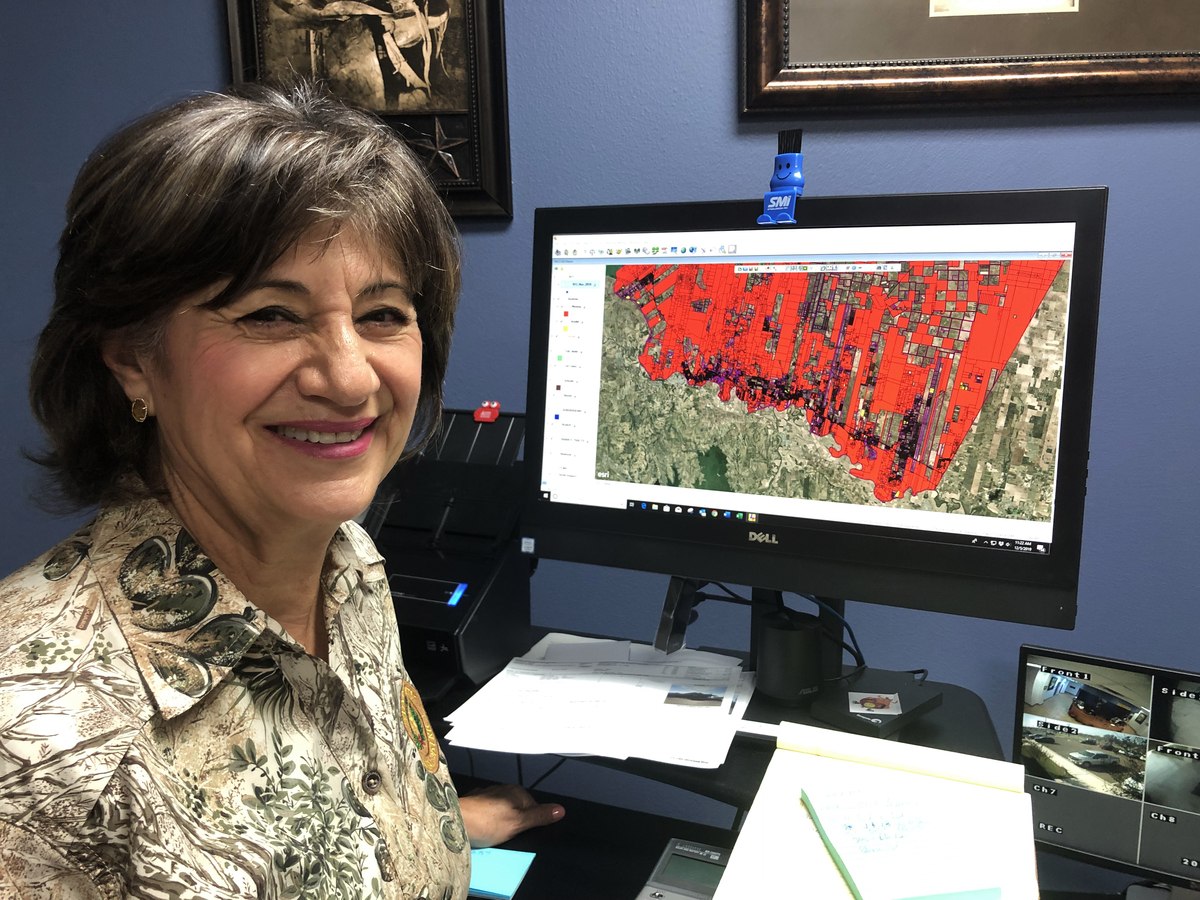 The computer screen of Starr County Chief Appraiser Rosalva Guerra is awash with red. These are properties where the county is unsure of the owner.

In her tidy office, she pulls up a map on her computer screen that shows all the properties in the county. The map is awash with red, the color used to denote parcels where the county is unsure of the owner.

In Starr County, property has been handed down through many generations, some of it going back to land grants made by the King of Spain. Tracts are divided and subdivided between heirs, but Guerra says they rarely establish clear title.

"So can you imagine the long list of heirs to partition that?" Guerra said. "It's a nightmare. Yeah, it's just going to take a long time to be able to do that. I don't think it's going to happen by 2020."

Yet a senior CBP official in Washington was not so pessimistic about the construction timetable. "If [landowners] don't voluntarily sell and we have to condemn the property," the official said, "the judge can grant possession to the government nearly immediately after the declaration of taking and we can begin construction. ... We're getting a lot of offers to sell down there." 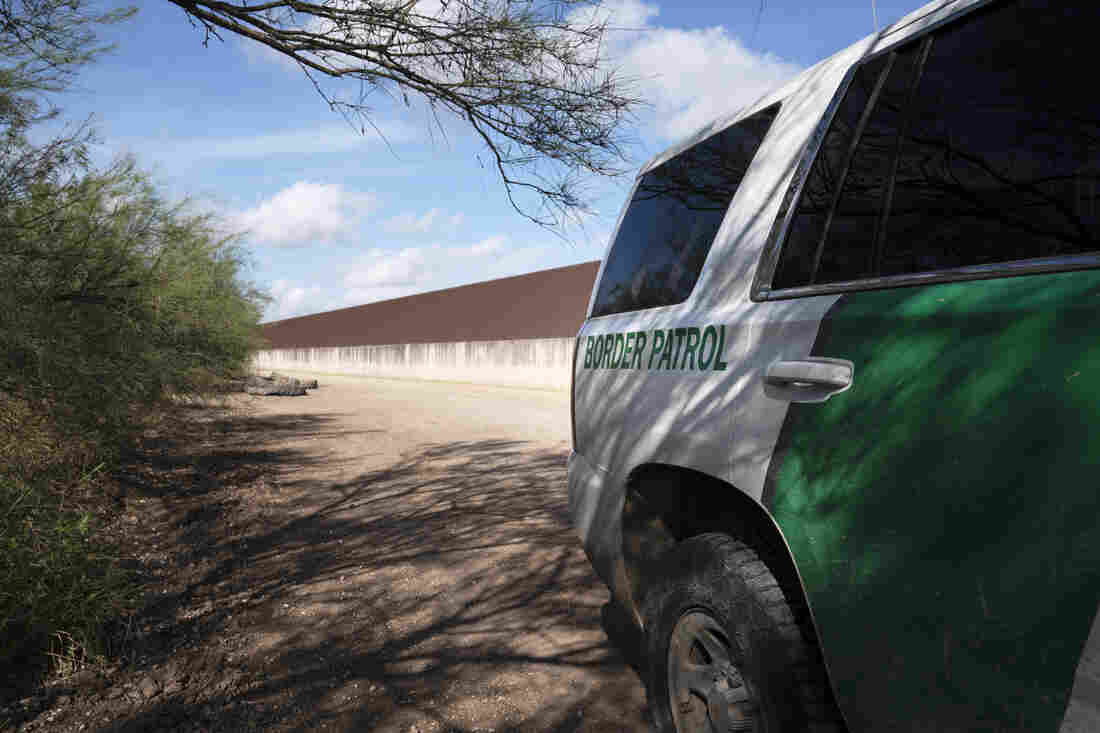 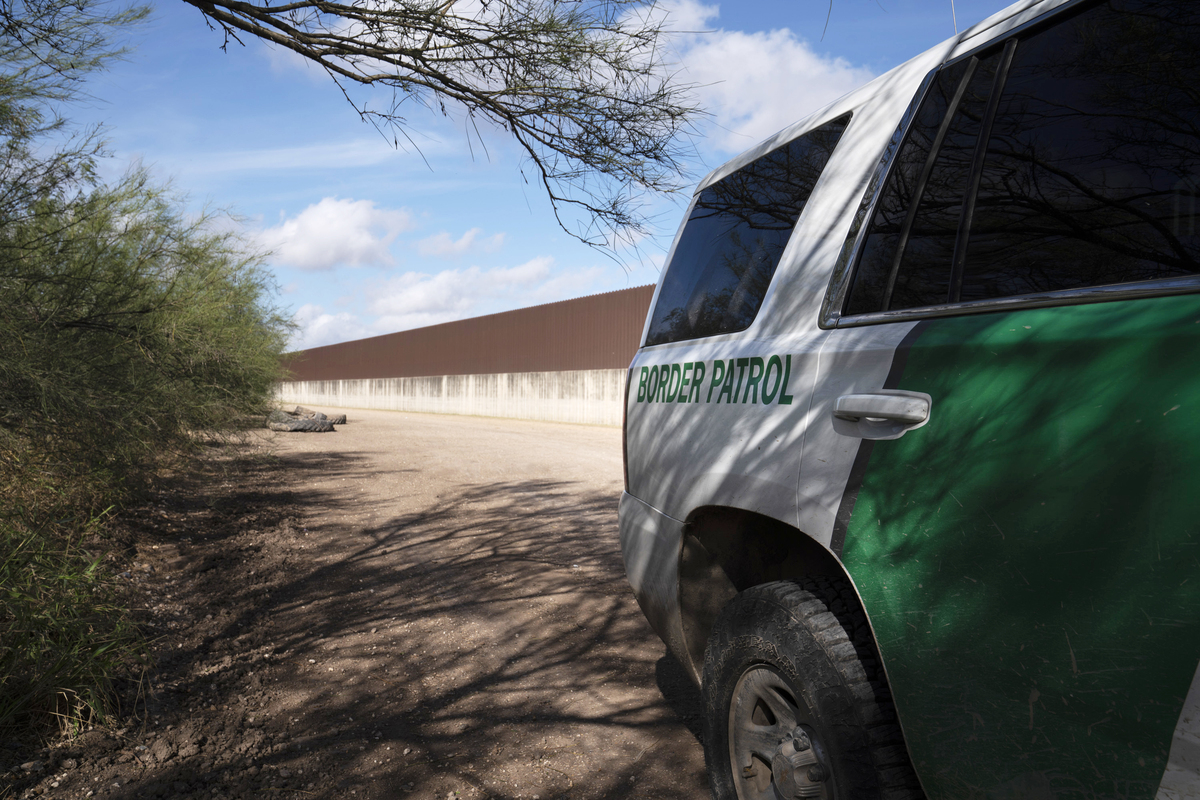 A Border Patrol vehicle is parked near the existing border wall south of Donna, Texas.

Identifying the owner is only the first step. Then the government must request access to survey the land. So far, the Justice Department has had to sue nearly 50 property owners in the Rio Grande Valley just to get that access.

One of those defendants is Delfino Garza, an architect in Starr County. He didn't want government surveyors coming on his property outside Rio Grande City where he has a vineyard. As a sideline, he planted grapes a decade ago, clearing thick brush down by the Rio Grande for his vine rows.

"After about the third year, we started to make wine. And now in the last year they came to us about putting a border wall on our property," Garza said.

Garza is fighting the border wall. He voted for Trump, but he says he won't do so a second time. He fears the wall will kill his infant winemaking business.

"People don't go to wineries to see a border wall," he said. "We want this to be an attraction for the city. And this is just hurting us."

Qualia, the Border Patrol official in charge of the Rio Grande Valley wall team, says the government is trying not to be heavy-handed. Land acquistion specialists are spending time talking to landowners like Garza about the placement of the barrier on his vineyard property.

"I think it's important to note that we all live here, too," Qualia said. "Our kids go to school. We go to church. So we really take that into consideration when we're sitting down and meeting with these owners."

And, inevitably, those discussions with landowners will delay the project further. "Things that are complicated typically do take time," Qualia added.

Meanwhile, Trump has appointed his son-in-law and senior adviser Jared Kushner to oversee and speed up completion of the border wall. The president has asked for frequent updates. He reportedly told aides earlier this year, just "take the land."

But in the Rio Grande Valley of Texas, it's not that easy.