Accessibility links
4 Months And Counting, An Acting Intelligence Chief In The Hot Seat It's the longest that the director of national intelligence role has been unfilled since its creation 15 years ago. And the delay has implications for the U.S. intelligence community and beyond. 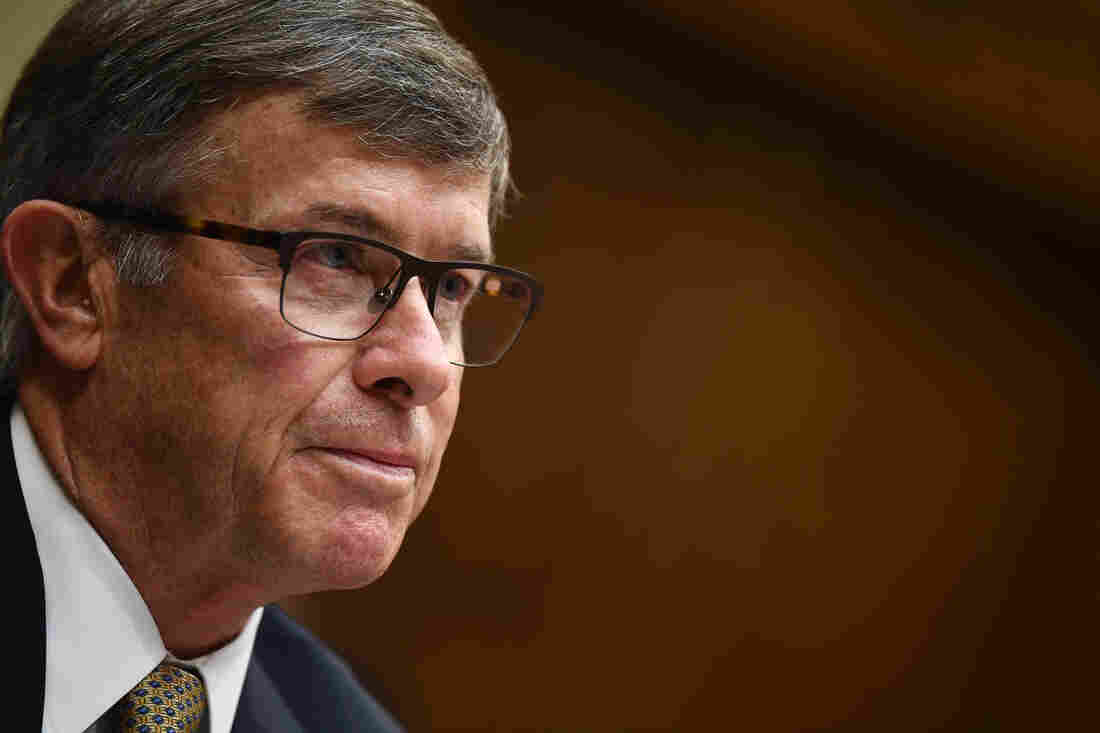 Joseph Maguire has been acting director of national intelligence since August — the longest the position has remained unfilled since its 2004 creation, which was prompted by the attacks of Sept. 11. Brendan Smialowski /AFP/Getty Images hide caption 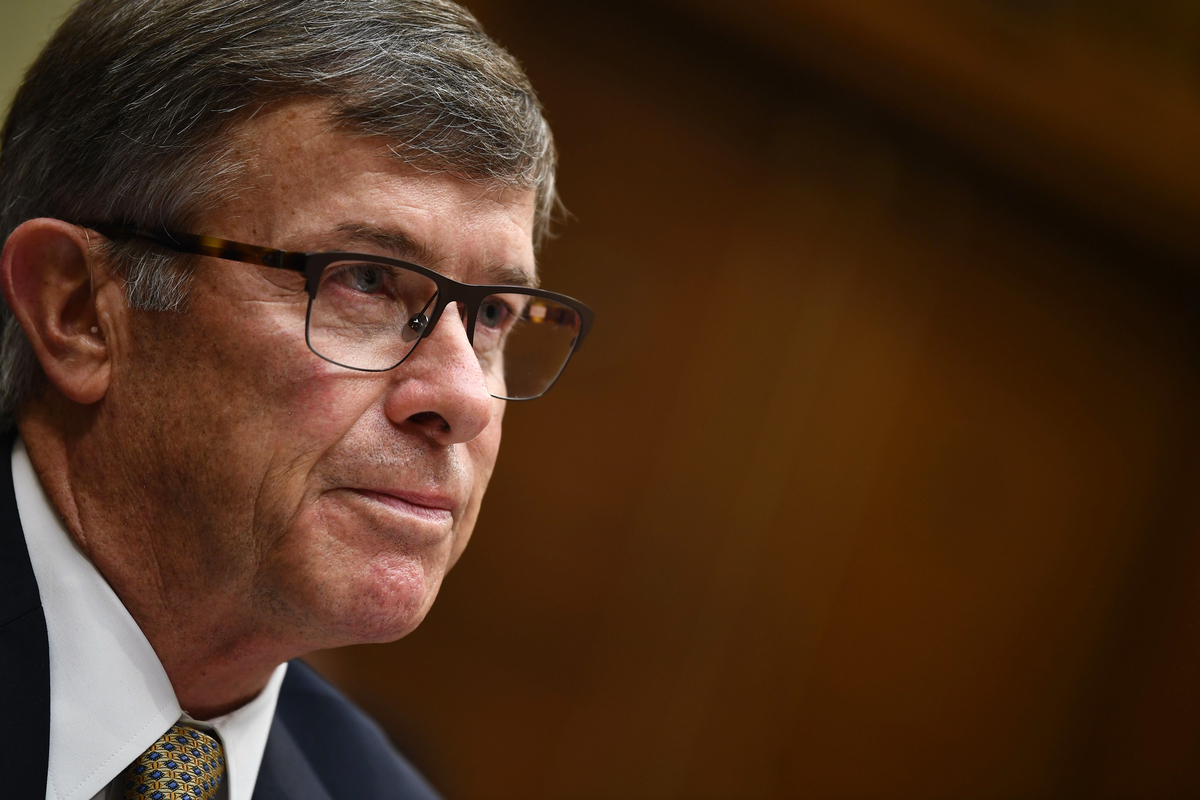 Joseph Maguire has been acting director of national intelligence since August — the longest the position has remained unfilled since its 2004 creation, which was prompted by the attacks of Sept. 11.

Before the words "Ukraine" and "impeachment" dominated headlines, before most Americans had heard of Marie Yovanovitch or Lt. Col. Alexander Vindman — Adam Schiff sat down to write a cryptic letter.

It was September. Schiff is the California Democrat who chairs the House Intelligence Committee. On fancy committee stationery, a big seal at the top, Schiff drafted four frustrated-sounding pages and addressed them to Joseph Maguire, the acting director of national intelligence.

"So far as the Committee is aware, this marks the first time a Director of National Intelligence has ever sought to overrule the [Intelligence Community Inspector General] and conceal from Congress a whistleblower complaint," reads the letter, dated Sept. 13, 2019.

When Schiff released the letter that evening, it was the first public mention of the whistleblower, a U.S. intelligence official whose complaint set in motion forces that have since resulted in the impeachment of President Trump. Attached to the letter: a subpoena, demanding that Maguire come testify.

He did. Maguire's appearance before the House Intelligence Committee, on Sept. 26, marked the first public hearing of the impeachment inquiry. It also marked an uncomfortable turn in the spotlight for Maguire.

"My life would have been a heck of a lot simpler without becoming the most famous man in the United States," he told Congress, adding that at the time he learned of the complaint, he was still so new to the job that he was using a Garmin to commute to work.

It's debatable whether Maguire was, then or now, the most famous man in the U.S. He has kept a low profile since his testimony and declined NPR's interview request.

What's not debatable is what an awkward position he found himself in: caught between a White House looking for loyalty and subpoena-wielding lawmakers looking for answers.

Then, there's the "acting" part of his title. Maguire took over as acting DNI more than four months ago, on Aug. 16. That's the longest period of time without a Senate-confirmed DNI since the position was created in 2004.

To understand how this matters to the U.S. intelligence community and beyond, it's instructive to recall why the post seemed like a good idea in the first place. It came about in the atmosphere of fear and soul-searching that followed Sept. 11, amid determination that such an attack should never happen again. Commissions were formed; reports were written; everyone had an opinion.

"The most fundamental problem," wrote Sen. Richard Shelby, R-Ala., in one congressional report in 2002, "is our Intelligence Community's inability to 'connect the dots' available to it before September 11, 2001, about terrorists' interest in attacking symbolic American targets."

By the time the 9/11 Commission, set up to investigate the attacks, dropped its book-length final report in July 2004, a consensus had formed. In essence, it was that the U.S. intelligence community — a collection of more than a dozen agencies, organized at different times for different purposes under different government departments — had failed to coordinate in ways that could have prevented the attacks.

The central, crowning recommendation of the 9/11 Commission report was the creation of a new position, overseeing the work of all U.S. spy agencies — someone who could force them to talk to each other.

Tasked with drafting the legislation was Republican Sen. Susan Collins of Maine, then the chair of the Senate Governmental Affairs Committee. "I felt a sense of urgency because this was already 2004," Collins said in an interview this week.

But there were many questions and turf battles: How should the office be organized? Who should lead the intelligence briefing delivered each morning to the president? Who gets the final say when spy agencies disagree? And who controls the purse strings?

Under the existing system, many of those duties were handled by the director of central intelligence, who also had a large agency to run, the CIA.

For that reason, many CIA officials and allies opposed the creation of the DNI position. Robert Gates, who served as DCI in the early 1990s, expressed that criticism in a 2004 interview with NPR.

"It would be like the captain standing at the helm of an aircraft carrier, trying to steer the thing with all of the cables connecting the steering to the rudder cut," he said. "He would have a nice title and no real authority."

Collins recalled that the position was also opposed by the then-secretary of defense, Donald Rumsfeld.

"His department was going to lose considerable power over the intelligence community's budget, which was funneled through the Department of Defense," she said.

But President George W. Bush endorsed the plan. After months of hearings and negotiations, Congress produced a bill — the Intelligence Reform and Terrorism Prevention Act — that Bush signed on Dec. 17, 2004.

An evolution of opinions

John Negroponte became the first director of national intelligence. Bush nominated him for the position in February 2005, while he was serving as ambassador to Iraq.

Of the conflict between DNI and CIA, "some water had to go under the bridge," he said.

"I believe that there are many people, particularly the career professional intelligence officers in the CIA today, who still do not accept the fact that there was a directorate of national intelligence created to oversee them," Negroponte told NPR this week. "I think that difference lingers to this day."

Michael Morell, a longtime intelligence official and two-time acting CIA director, said in an interview that his view of the DNI has evolved over time, from opposition to support. Among the things that changed his mind: a different approach to compiling the president's daily brief, or PDB.

In the pre-DNI era, the director of central intelligence was the president's principal intelligence adviser. Because the DCI led the CIA, it was usually CIA material that was given top billing in the briefing, even if another agency disagreed. Under the DNI, Morell explained, disagreements and caveats are given a much more detailed airing.

In the 15 years since its creation, the office of the DNI has expanded to a staff of thousands. The exact number is classified. A sleek headquarters building has gone up in Northern Virginia. Looking back, Collins said the DNI experiment has been largely successful, though not perfect.

"I do hear a criticism that the DNI office has grown too big, that it has become too bureaucratic. But compared to where we were prior to 9/11, we have come an enormous way."

The first DNI, Negroponte, hesitated when asked whether the position of DNI has worked.

"I wouldn't say it hasn't failed. I'm not sure it's worked fully. I think it's still a work in progress," he said. "Those problems of coordination don't just go away because you say they should."

Negroponte pointed to last week's Justice Department inspector general report, which detailed 17 mistakes and omissions made by FBI agents in applying for secret court orders to surveil onetime Trump campaign adviser Carter Page. The FBI's application suggested that Page was a Russian asset but left out key details, including that Page had previously worked with the CIA.

The FBI is promising changes. And no one ever claimed that a strong DNI would prevent every mistake, or solve every problem. There is broad agreement, though, that failing to fill the post is not a healthy situation for U.S. intelligence agencies.

"It is definitely a problem that the president has not nominated a permanent, Senate-confirmed DNI," Collins said. "If the people in the intelligence community do not know whether the acting DNI is going to be there next week, they are going to be less responsive to his concerns, to his directives. And that is a problem. So I would urge the president to make a choice."

Morell, the former acting CIA director, agreed. "I was acting director of CIA twice, so I know what I'm talking about here. You don't feel as empowered as you would if you are Senate-confirmed."

So how awkward a position does Joseph Maguire find himself in, four months and counting after being named acting DNI? Morell noted that Maguire is a U.S. Navy vice admiral, with 36 years of military service.