Accessibility links
In Uncrewed Test, Boeing's Starliner Capsule Fails To Reach Space Station After a flawless launch from Cape Canaveral, Fla., the crew capsule, loaded with 600 pounds of cargo for the station, was unable to reach its intended orbit, Boeing says. 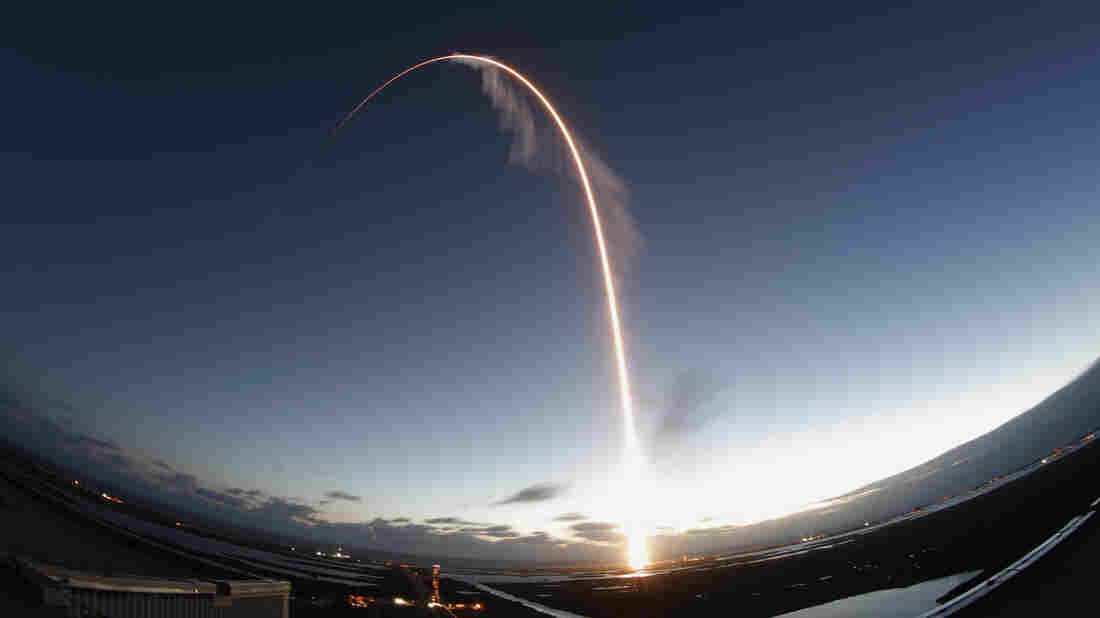 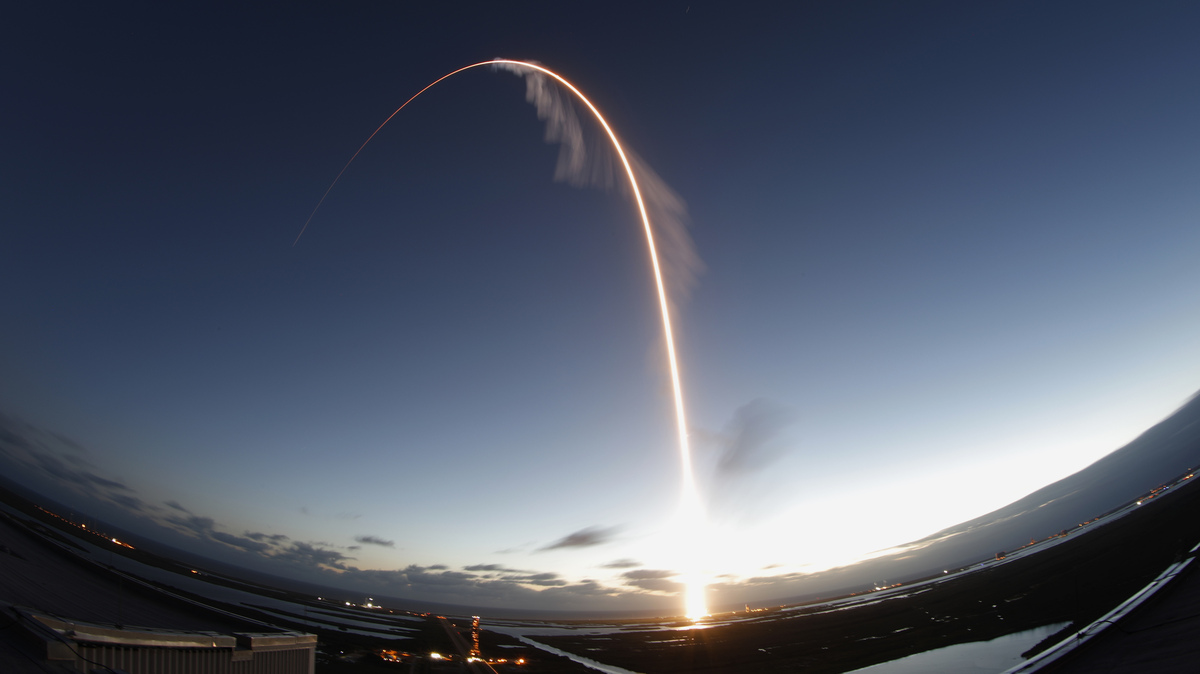 A time exposure of the United Launch Alliance Atlas V rocket carrying the Boeing Starliner crew capsule on an flight test to the International Space Station lifts off in Cape Canaveral, Fla., on Friday.

Boeing's new Starliner capsule, on its maiden uncrewed flight to the International Space Station, has failed to attain its proper orbit after a flawless liftoff from Cape Canaveral, Fla., the company says.

Boeing says the capsule, which is carrying 600 pounds of cargo as a dress rehearsal for a possible mission with astronauts next year, has reached a stable orbit, but not at the correct altitude to dock with the station.

About 30 minutes after liftoff, the capsule's onboard clock malfunctioned, causing the spacecraft's computer to fire its engines incorrectly. The unplanned maneuver used too much fuel, preventing the Starliner from rendezvousing with the station.

NASA administrator Jim Bridenstine said that had astronauts been on board Friday's Starliner flight, they would have been safe and could have taken control of the vehicle.

"We trained extensively for this type of contingency and had we been on board there, there could have been actions that we could have taken," said NASA astronaut Nicole Mann. She's slated to fly on the first crewed Starliner mission next year.

"That's why you have test pilots on board, especially for these early missions," she said. "We are looking forward to flying on Starliner. We don't have any safety concerns.

The test is part of NASA's $6.8 billion Commercial Crew program to launch humans from the U.S. and end a nearly decadelong reliance on the Russian space agency for rides to the station. Currently, NASA astronauts hitch a ride on Soyuz capsules.

Boeing is going head-to-head with SpaceX, which conducted a successful docking of its Dragon capsule with the station in March. SpaceX could send astronauts on Dragon as soon as the spring.

Friday's launch of Starliner also comes as Boeing's public image has been battered by the fatal crash of two of its 737 Max jetliners last year and the subsequent global grounding of the aircraft type.

Whether Boeing or SpaceX, when NASA does launch humans from U.S. soil sometime next year, it will be the first time since the last Space Shuttle mission in 2011.

"We're doing it in a way that's never been done before," Bridenstine said. "This time when we go, we're going to go with commercial partners. NASA is not purchasing, owning and operating the hardware. We're buying the service."

It's a lot like calling an Uber to space. NASA is paying for rides to the station, relying on two commercial vehicles — SpaceX's Crew Dragon and Boeing's Starliner.

Originally NASA called for U.S. launches to the station to resume by the end of 2017. The program and its delays date back to its start nearly a decade ago. Funding for the project was awarded in steps, and each round brought new developments and eventually whittled down the companies getting the Commercial Crew contracts to just two.

However, comprehensive congressional funding was lacking. "They were underfunded at the beginning," said retired NASA astronaut Sandy Magnus. "Continually fighting this battle of one-year funding plus getting into these continuing resolutions [in Congress] really stops the momentum of any technical program."

The program has also faced technical issues. Both Boeing and SpaceX rely on parachutes to safely land back on Earth, and testing their design has delayed certifying the capsules for human passengers.

"You wouldn't think that parachutes would be hard. It's a technology that's, that's actually decades old," said space policy analyst Laura Forczyk. NASA has been using parachutes for all of its human space vehicles. "It turns out that it's really hard to make them efficient and reliable.

This week SpaceX completed the 7th successful system test of Crew Dragon’s upgraded Mark 3 parachutes, which will provide a safe landing back on Earth for astronauts returning from the @space_station pic.twitter.com/FdBXdvqmf4

Boeing and SpaceX both experienced additional issues with their abort systems. SpaceX's Crew Dragon and Boeing's Starliner use engines built into the capsule that fire and push the vehicle — and the astronauts — to safety should something go wrong midflight.

"When you think about these companies designing and building these vehicles, and this is sort of new to them, you would expect to have some technical challenges along the way," said Magnus, who is also a member of NASA's Aerospace Safety Advisory Panel (ASAP) which advises the space agency on safety issues. "From an ASAP viewpoint, that's not really the concerning part. The thing that we watch is just how they're dealt with."

Both companies have responded to the technical challenges. SpaceX has been continuously testing its parachutes. It also says it found the root cause of an explosion earlier this year related to its abort engines. It will test that system next month by firing the abort motors midflight after launching a test capsule on its Falcon 9 rocket.

Boeing completed a test of its abort system last month and called the mission a success. But one of the capsule's parachutes failed to open before touchdown. Boeing said despite the failed chute, if a crew was on board they would land safely. At a news conference this week, Boeing said it identified the cause of the failure and has fixed the issue.

Touchdown! @BoeingSpace completed its Pad Abort Test designed to verify that the #Starliner spacecraft's systems will protect @Commercial_Crew astronauts in the unlikely event of an emergency prior to liftoff. Learn more about today's test: https://t.co/JjjgtGxaZL pic.twitter.com/hyLu96G5e0

"I think the thing I'm most proud of, with Boeing and both of our commercial crew providers, is as they found issues, they didn't shortcut," said NASA Commercial Crew manager Kathy Lueders. "We all understood that our mission for us to fly crew, we have to fly crew safely."

But the pressure is on. NASA is nearly out of rides to the station on Russia's Soyuz spacecraft, and the last seat is booked for April 2020. Anticipating further delays, the agency said it is conducting "fact finding" discussions to purchase two additional seats from Roscosmos, Russia's state-run space launch provider.

"When you have a new program coming on board like the Commercial Crew Program, it makes sense to make sure we are looking at everything, working out the steps and not putting anybody in a position where they feel rushed," said NASA's deputy ISS manager Joel Montalbano.

The same congressional funding that delayed Commercial Crew could affect another NASA priority — returning humans to the moon by 2024. An appropriations bill working its way through Congress doesn't fully fund the program, which could delay that mission into the late 2020s.

A previous version of this story misspelled Joel Montalbano's last name as Montoblano.