Accessibility links
Calling Trump 'Morally Lost,' 'Christianity Today' Editor Calls For Impeachment Mark Galli compares the president to an abusive husband who "needs to be out of the house." Galli says he felt compelled to say "what's going on, what the facts on the ground are." 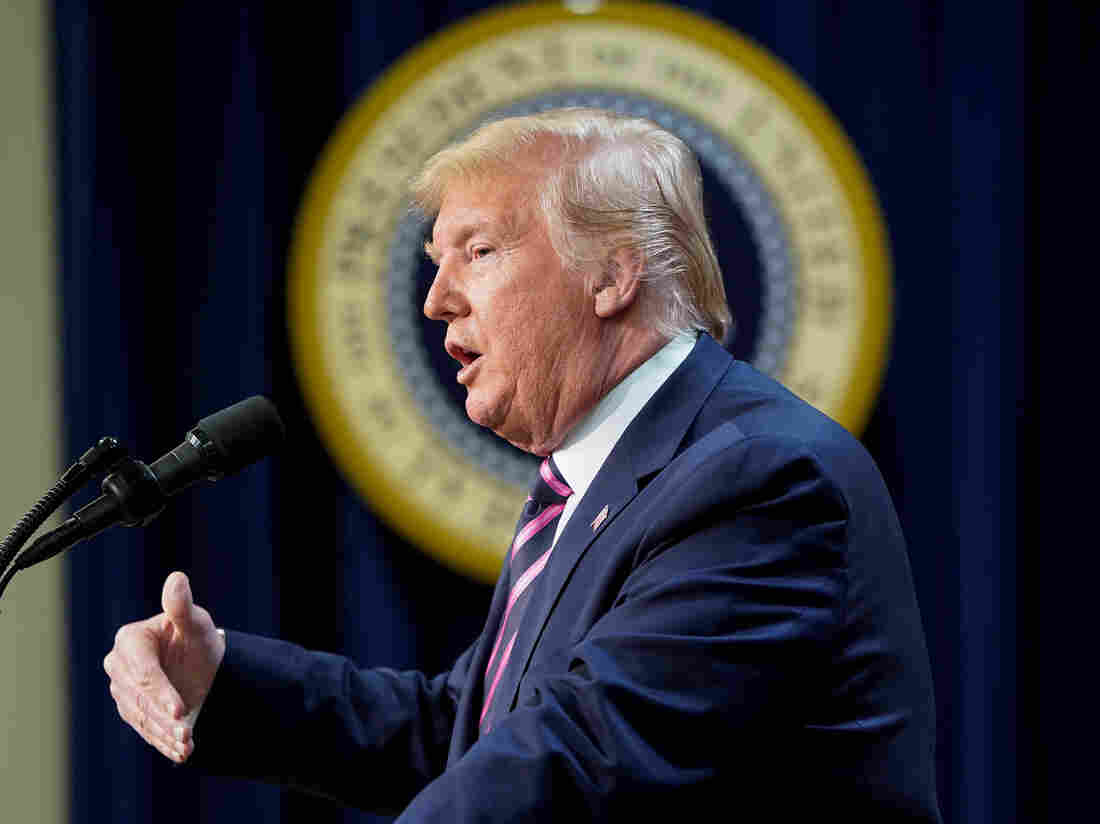 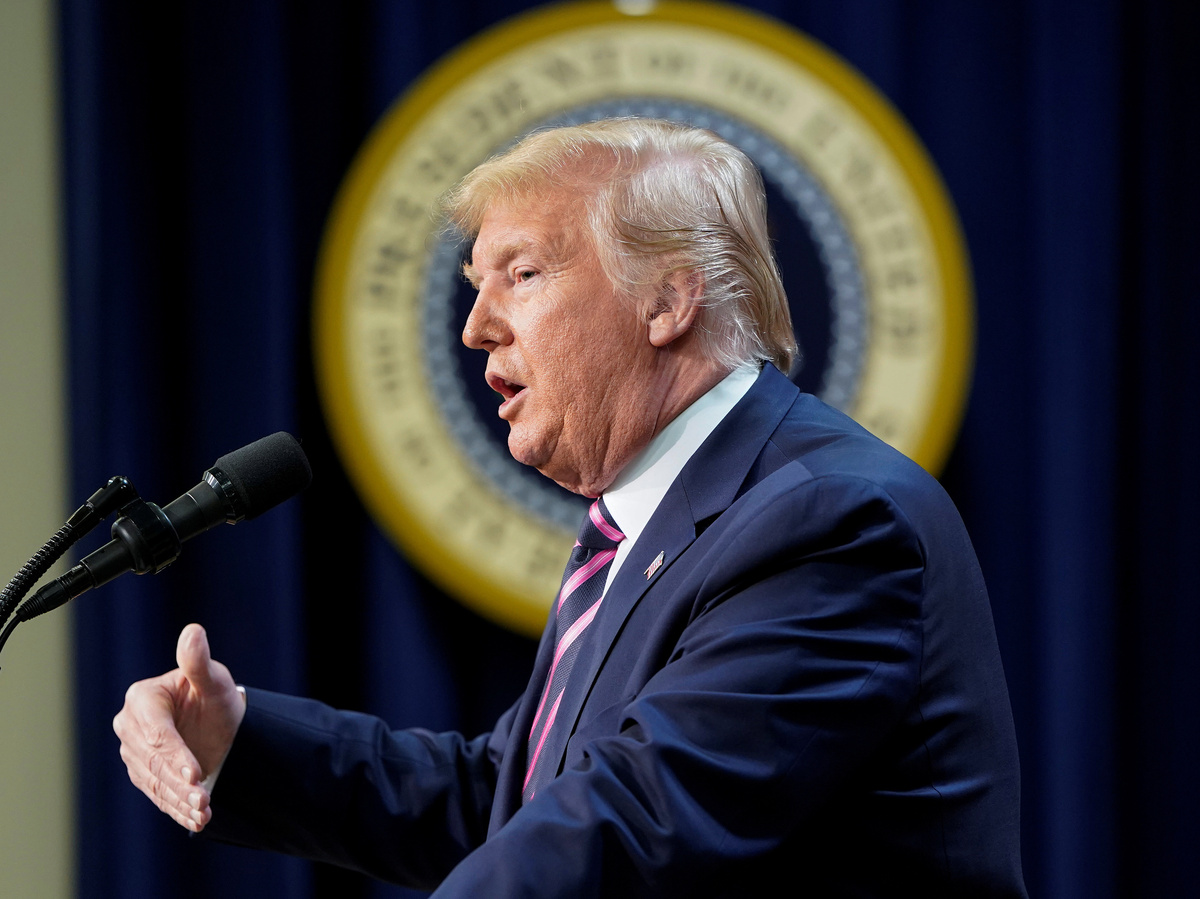 A vote to impeach President Trump has come from an unlikely corner: the evangelical magazine Christianity Today, whose editor-in-chief, Mark Galli, says the president's "generally disreputable moral behavior" and his actions in the White House prompted him to write an editorial titled "Trump Should Be Removed from Office."

In his magazine piece, Galli called the president's Twitter feed "a near perfect example of a human being who is morally lost and confused." From the highest office in the U.S., Trump uses his tweets as a direct pipeline to the public to slander and mischaracterize, to abuse others and outright lie, Galli says.

"You don't even have to be a religious person to recognize that they're moral problems," Galli tells NPR's Steve Inskeep on Friday, in an interview on Morning Edition.

"When a person has serious and longstanding and habitual moral habits like that, it's not something just to condemn, but also suggests kind of a deep psychological and moral confusion. And that's why I use that word," Galli says. "It's not like I have any personal animus against the president. I suspect that if I was in a room with him, we could have a very amiable and delightful conversation. But he does display characteristics that I think, as a leader of a great nation like the United States, are deeply problematic."

The editorial seems to have infuriated Trump, who attacked Christianity Today on Twitter Friday morning by calling the magazine – which is generally considered to be aimed at moderate and centrist Christian readers – a "far left magazine" that "knows nothing about reading a perfect transcript of a routine phone call."

A far left magazine, or very “progressive,” as some would call it, which has been doing poorly and hasn’t been involved with the Billy Graham family for many years, Christianity Today, knows nothing about reading a perfect transcript of a routine phone call and would rather.....

Trump accused Christianity Today of preferring to have an unspecified "nonbeliever, who wants to take your religion & your guns" in the White House rather than him. He ended his tweet with what looks to be a typo: "I won't be reading ET again!"

As for why Galli felt the need to publish the editorial now, he says the testimony and other evidence from the House impeachment hearings have convinced him that the president should be removed from office. While Galli found it hard to glean information from special counsel Robert Mueller's investigation into Russian interference in the 2016 election (he says it produced "quite confusing and ambiguous" findings), he says that when the impeachment hearings began in Congress, "It became pretty clear pretty quickly, unambiguously that the president had misused his office for personal political gain."

Galli says that when revelations about Trump's dealings with Ukraine were viewed along with what he calls "the generally disreputable moral behavior" Trump has displayed in office, the events "culminated in a moment that I just said, you know, it's we've moved beyond 'On the one hand, he does these good things, on the other hand, he's got these problems, too.'

"We just need to say what is," Galli says. "What's really going on, what the facts on the ground are."

The Christianity Today editorial has provoked a range of sharp responses, from gratitude to condemnation. Franklin Graham, Billy Graham's son, told The New York Times that his father would be embarrassed that the journal he founded was being used to call for Trump's removal.

In 2011, Billy Graham gave an interview with Christianity Today in which he expressed regret over his ventures into the political world. Graham said he "sometimes crossed the line" in his activities, particularly in his relationship with President Richard Nixon, who resigned months after the House of Representatives began impeachment proceedings against him.

Of evangelicals' continued support for Trump, Galli says the president gets high marks in that community for what his approach to abortion and religion. But he also compares Trump to an abusive husband who needs to be kicked out of the house:

"When that husband begins to physically abuse the wife and actually become physically dangerous, that doesn't balance the scale anymore. And now the real issue is, should this man be in the house or not? And most of us would say he needs to be out of the house."

Galli adds, "He needs to be out of the house. And that's how I feel like we've gotten to the point in the Trump administration. "

In his editorial, Galli urged his fellow Christians who steadfastly support Trump to "remember who you are and whom you serve."

He added, "Consider what an unbelieving world will say if you continue to brush off Mr. Trump's immoral words and behavior in the cause of political expediency."

Galli also said many of the criticisms he leveled at Trump are similar to the magazine's approach to the impeachment proceedings against President Bill Clinton.

On Friday, Christianity Today tweeted its stances on both Clinton and Nixon.

In 1998, the magazine printed an editorial stating:

"The President's failure to tell the truth — even when cornered — rips at the fabric of the nation. ... And while politicians are notorious for breaking campaign promises, while in office they have a fundamental obligation to uphold our trust in them and to live by the law."

"There can be no doubt that a large percentage of those who voted for Richard Nixon in November, 1972, no longer have confidence in him, and that his capacity to execute the functions of his office has been considerably reduced. Whether guilty or innocent of impeachable offenses — 'treason, bribery, or other high crimes and misdemeanors' — he bears the ultimate responsibility for what Watergate has come to stand for."

An earlier headline on this story said the editor called for the impeachment of the president. In fact, he called for Trump's removal from office.