Author Susan Cooper knows what it is to be scared of the dark. As a child growing up in England during World War II, she remembers long, dark nights, with Nazi bombers flying overhead.

"We would be sitting in a raid shelter underneath the back lawn with Mum reading books to us by the light of a candle," she recalls. "When the bombs came closer, the candle would shake."

Now, nearly a lifetime later, Cooper's book The Shortest Day, is a celebration of light gradually returning after the winter solstice. Saturday, Dec. 21, is the shortest day of the year in the Northern Hemisphere.

"I've spent my life writing about the light and the dark," Cooper says. And this latest book is "a family celebration of the light coming back after the dark threatens to take over the world."

The text of the book is a poem Cooper wrote in the 1970s for The Christmas Revels, an annual celebration of the solstice. It has been read at solstice events for more than 40 years.

Carson Ellis illustrated the poem. She begins the book with wordless spreads. These are "atmospheric landscapes," she explains, "meant to feel a little bit bleaker on each page."

Ellis didn't get it quite right on the first try.

"I started to mock this book up in this way that had ... merry villagers reveling on their way to a solstice celebration," Ellis says. The illustrations were cheerful and lighthearted. 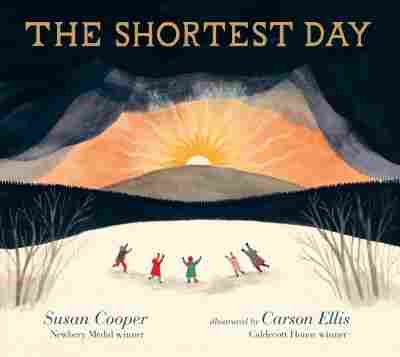 by Susan Cooper and Carson Ellis

But, corresponding by mail, she and Cooper found a different approach.

Cooper describes their collaboration as "one long letter."

Cooper explained that although the poem is about the return of light, the book needed to convey the depth of darkness, especially in olden times. "It's a book about deeper and more serious stuff ..." Ellis says. "This sense that, long ago, those shortening days, along with them came a lot of dread associated with the cold, and starvation, and disease."

Their correspondence completely changed Ellis' approach to the poem, which, she admits, was daunting. "I read the letter and thought, 'Oh, gosh, this is a much harder book,' " she recalls.

So Ellis switched gears and made illustrations that told the story of traditions that developed around the solstice – she says the winter holidays are an extension of the joy and relief of light gradually returning after a long winter. More than half the book depicts darkness and then ...

"When the sun rose on the morning after the shortest day, I wanted it to feel really joyous," Ellis says. "I wanted a sublime sunrise and a blue sky and it to feel like a new day and a new dawning."

Cooper says she hopes the book helps communicate a universal and timeless message of hope and peace.

Working on the book helped Ellis see beyond specific religious traditions associated with winter holidays. "It's more universal ... " she says. "It really is just kind of light triumphing over darkness. And once that year switches and those days begin to lengthen, it's a new year — and light is always a cause to celebrate."