Accessibility links
New SNAP Rule Impacts College Students By Limiting Benefits And Adding Confusion College students often struggle to make ends meet, and food insecurity is more common on campus than you might think. Now it could be even more challenging for some to get food stamps. 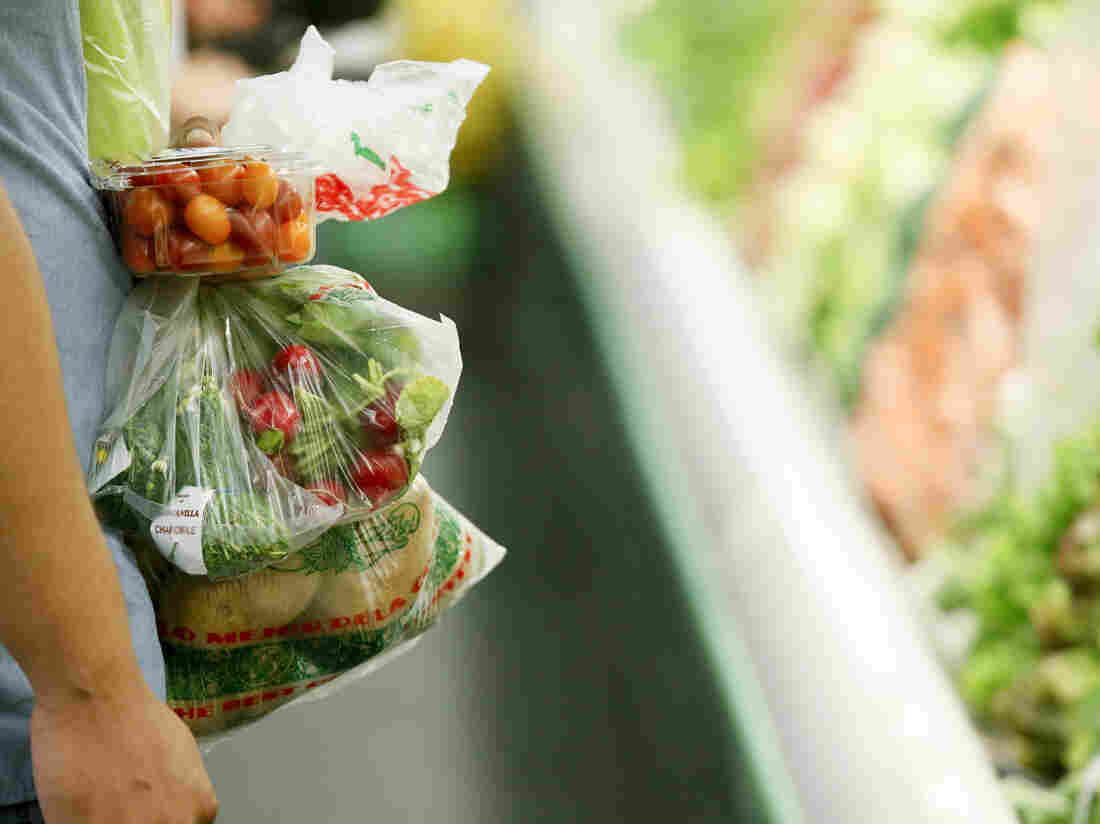 The new Trump administration rule makes it harder for states to waive the requirement that adults work at least 20 hours a week in order to receive their Supplemental Nutrition Assistance Program — or SNAP — benefits. Some low-income college students could be affected. Danny Moloshok/AP hide caption 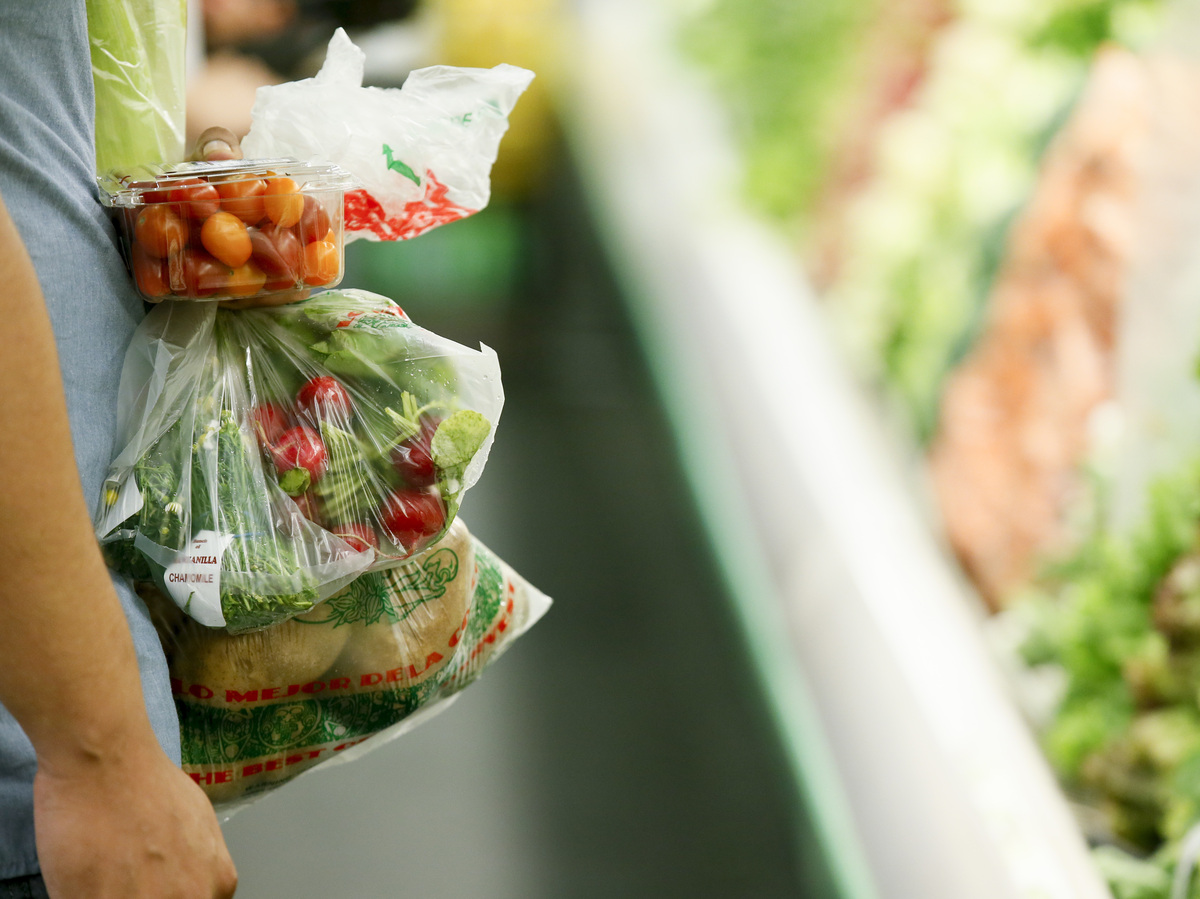 The new Trump administration rule makes it harder for states to waive the requirement that adults work at least 20 hours a week in order to receive their Supplemental Nutrition Assistance Program — or SNAP — benefits. Some low-income college students could be affected.

Some low-income college students are among the 688,000 food stamp recipients projected to lose benefits as a result of a Trump administration rule announced Dec. 4. While the rule explicitly targets "able-bodied adults without dependents," it also limits food assistance for a share of college students at a time when campuses across the country are grappling with how to respond to food insecurity.

The new rule makes it harder for states to waive the requirement that adults work at least 20 hours a week in order to receive their Supplemental Nutrition Assistance Program — or SNAP — benefits. Policy experts say it will limit benefits for college students enrolled less than half of the time while further complicating the already confusing process of determining students' eligibility and connecting them to resources.

"As long as a student is at least half-time, they are not considered an [able-bodied adult without dependents] subject to SNAP work requirements, so that new rule would not impact them," says Kathryn Larin, director of the Education Workforce and Income Security Team at the Government Accountability Office. "The group that it would impact would be students enrolled less than half-time."

Most college students are excluded from receiving SNAP by design, Larin says.

This is because Congress created the program with the image of a "traditional" student in mind: someone entering college directly from high school, financially reliant on their parents, with no income or dependents.

But this archetype is far from universal, says Parker Gilkesson, an analyst at the Center for Law and Social Policy who specializes in income and work supports. Only about 1 in 4 students attend a four-year institution immediately after high school.

Many college students are older or are parents themselves. And few have a financial safety net: Countless families are spending all they have just to send their children to college, let alone pay for their food and other necessities, she says.

A Snapshot Of Poverty In America

"[Congress] did recognize there are circumstances where students could and should be eligible for SNAP, and so they set up a number of exceptions from this prohibition against college students getting SNAP," Larin said. "What are those exemptions, who is eligible for them, how do you meet those exemptions? That's where the confusion comes in."

In order for college students to be eligible for SNAP, they must first meet income and asset limits, household qualifications and immigration status requirements. Those who are enrolled less than half of the time — as defined by their school — can then qualify under standard SNAP rules.

Students enrolled more than half of the time may qualify for SNAP by meeting one of a number of criteria, which include being responsible for a dependent child younger than 6, working at least 20 hours a week in paid employment, receiving Temporary Assistance for Needy Families benefits, participating in an on-the-job training program, being outside the 18-49 age range, and being unable to work for health reasons.

"No matter if they're full time, part time, half time, even taking one class, [students] are taking the initiative to really better themselves and grow and further their academic career," Gilkesson says. "They shouldn't be punished for not being able to find steady employment in the economy that we are in today."

Gilkesson says it is unclear exactly how many students will lose benefits as a result of the new rule, particularly because able-bodied adults without dependents are not necessarily also classified as students if they are enrolled part time. But she adds it is clear that the rule will disproportionately impact young people, people of color and those who struggle to find employment, leaving them without much-needed food assistance.

"Most people who receive SNAP who can work, do work," she says. "But there are a lot of jobs and specifically low-wage jobs out here that have volatile schedules ... people can be let go at any time, so we shouldn't allow people to go hungry just based on their ability to maintain work."

According to National Center for Education Statistics data on unduplicated year-round enrollment, 5.8 million students were enrolled in public two-year colleges in fall 2017. About 2.1 million were full time, and 3.7 million were part time. Gilkesson says that while there are more students enrolled part time in community colleges than in four-year institutions, food insecurity exists on all types of campuses.

Yet there is no national estimate for how many college students do not have enough to eat. This was among the findings of a 2018 Government Accountability Office report that also said almost 2 million at-risk students who were potentially eligible for SNAP did not report receiving benefits in 2016.

Only 4 in 10 students who are potentially eligible for SNAP are actually enrolled in the program, according to Gilkesson. This is due to perceived stigma as well as confusion about who can apply for SNAP and how to do so.

"The information that's available from the USDA ... is difficult to find on their website and also hard to understand, it's very legal language," says Larin, adding that people whose jobs it is to connect college students with these resources may struggle to understand the criteria. Advocates worry that the new rule will exacerbate this confusion.

The GAO report released last December made two recommendations: that the Food and Nutrition Service (which is part of U.S. Department of Agriculture) improve the information on its website to make it easier to find and understand, and that it take a more active role in sharing states' best practices for connecting students to SNAP. The agency agreed with the report's recommendations but has not yet implemented them as of mid-December 2019.

Gilkesson received SNAP in college and was a SNAP worker at a county agency in North Carolina prior to her current job. She says it was not until she saw the other side of the "intricate" process that she realized how much information she never received as a student, both because she didn't know what to tell workers and because they didn't always know what to ask.

As a SNAP worker, she saw the impact that fresh food and hot meals had on clients' lives.

In fact, she adds, hunger makes it harder for people to find well-paying jobs that align with their skills and often leads to cycles of being laid off, having to find a new job quickly and missing out on the opportunity to gain the education, training and skills necessary for more meaningful and sustainable employment.

She says research shows that SNAP encourages work and that the idea that people experiencing poverty don't want to get jobs is "implicit bias."

The Trump administration says the new rule is intended to promote SNAP recipients entering the workforce. Critics have slammed the change for eliminating food assistance for nearly 700,000 people, many of whom already struggle to find work.

Gilkesson says it is concerning that college students will lose benefits, but the prevalence of food insecurity should be an issue regardless of who is experiencing it.

"No one should be hungry," she says. "That's a basic necessity. And when we start to think about it in that way, we really will start to see the policy change that we need to see."

Rachel Treisman is an intern for NPR's National Desk.