Accessibility links
For Joe Biden, 1987 Brought Triumph In The Wake Of Political Setback Biden ended his first presidential campaign during a break in the confirmation hearings of Supreme Court nominee Robert Bork. As chair of the Senate Judiciary Committee, Biden sunk the nomination. 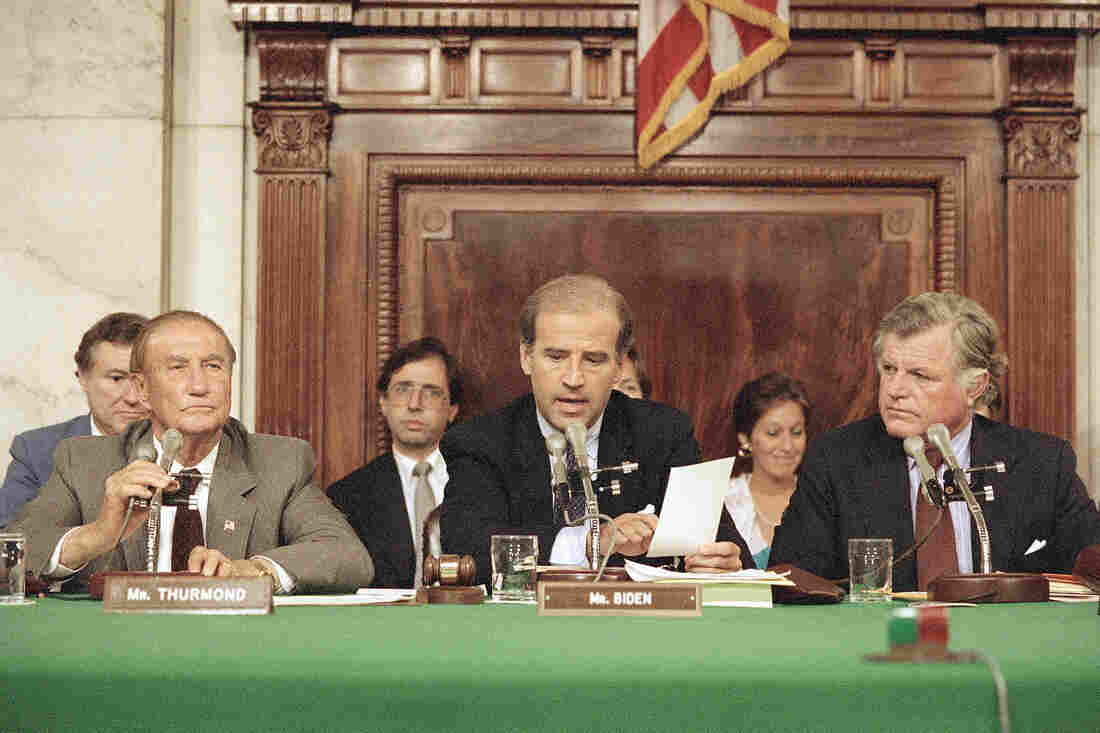 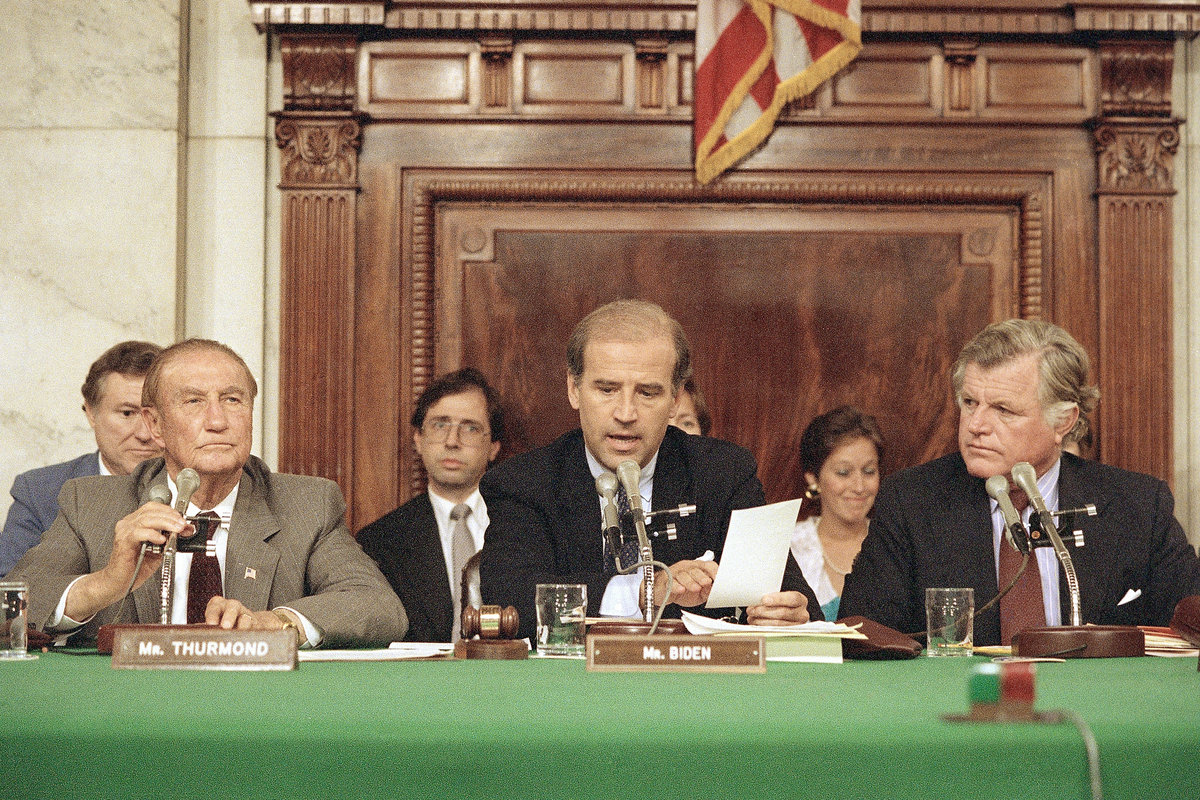 In 1987, then-Sen. Joe Biden, D-Del., center, was running for president and also chair of the Senate Judiciary Committee, responsible for leading the Supreme Court confirmation hearings of Robert Bork.

In late 1987, Joe Biden was in the midst of two high-stakes battles: one for the Democratic presidential nomination, and another, as chair of the Senate Judiciary Committee, to try to stop President Reagan's nominee to the Supreme Court, Robert Bork.

His fight for the presidential nomination would end abruptly, dealing Biden his biggest political setback up until that point. But Biden was successful in the other battle, as he thwarted Bork's nomination to the high court.

It was Sept. 23, during a break in the Bork confirmation hearings, that Biden held a press conference announcing his presidential campaign was over.

"It seems to me I have a choice," Biden said. "I have to choose between running for president and doing my job to keep the Supreme Court from moving in a direction that I believe to be truly harmful."

There's a question of how much of a choice it really was. Had he stayed in, it's not clear Biden's campaign would have been able to recover from the scandal that had enveloped it since just before the hearings began.

The month before, the Democratic presidential candidates debated at the Iowa State Fair. In his closing statement, Biden made a biographical turn, talking about why his family had remained working class for generations. 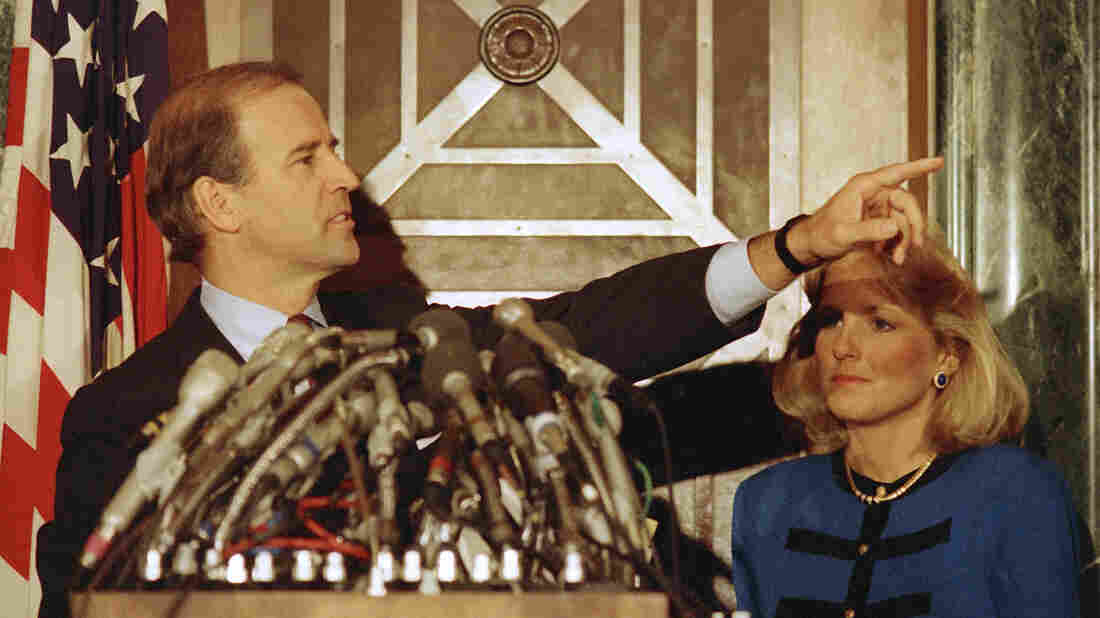 Biden gestures during a Sept. 23, 1987, news conference to announce his decision to withdraw as a candidate for the 1988 Democratic presidential nomination. With him is his wife Jill. Ron Edmonds/AP hide caption 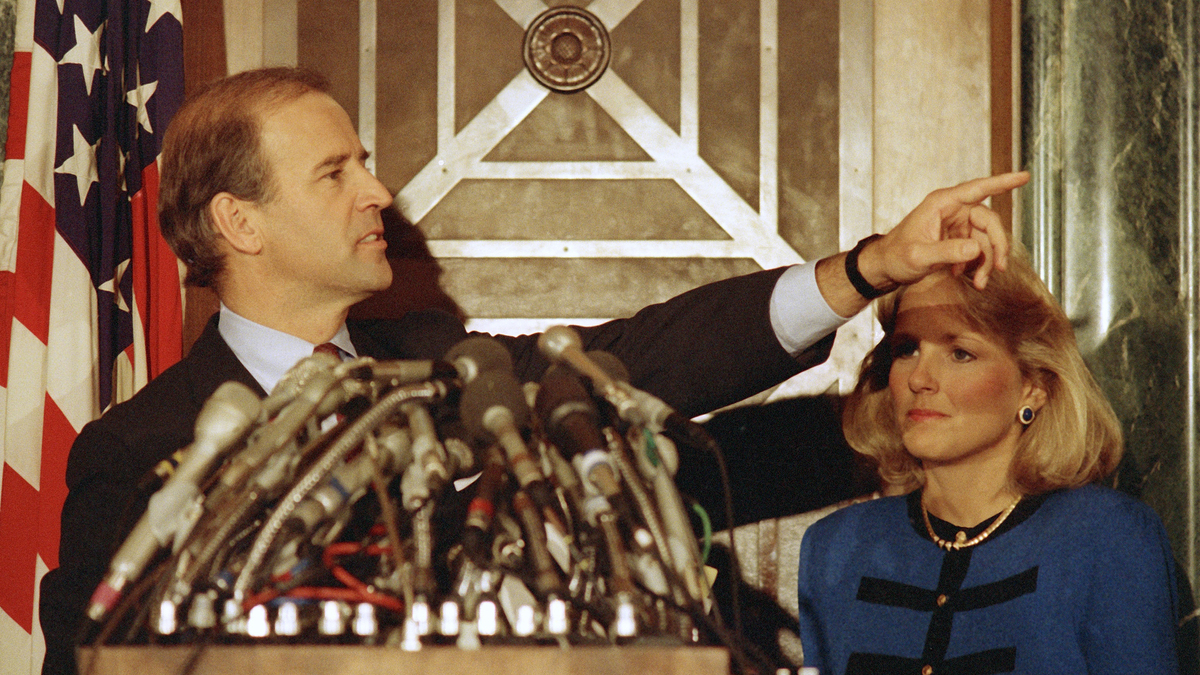 Biden gestures during a Sept. 23, 1987, news conference to announce his decision to withdraw as a candidate for the 1988 Democratic presidential nomination. With him is his wife Jill.

"Is it because they didn't work hard?" Biden asked. "My ancestors who worked in the coal mines of Northeast Pennsylvania and then would come up after 12 hours and play football for four hours."

It turns out he was paraphrasing a rousing speech-turned-campaign ad from a British Labour Party politician named Neil Kinnock.

"Was it because they were weak?" Kinnock asked. "Those people who could work eight hours underground and then come up and play football."

Biden had referenced it in speeches before, with proper attribution. But this time, he made it his own. Line after line, the similarities were unmistakable.

It took a couple of weeks for the story to break, seeded by a rival campaign. But Biden had very little time to tamp down the controversy. The Bork hearings began three days later.

Dropping out of the presidential race

As a law professor, Bork had criticized the legal reasoning behind Supreme Court decisions on civil rights and abortion. Republicans saw his nomination as a chance to reshape the court and public policy. Democrats were determined to stop him.

"This nomination is more — with all due respect, judge, and I'm sure you agree — than about you," Biden said in his opening statement of the hearings.

Now, hearings for Supreme Court picks last a couple of days and very little is revealed about the nominee's views. But with Bork, with Biden holding the gavel, the Judiciary Committee hearings went on for 12 long days. Bork went on at length about his judicial philosophy and his writings about the law when he was a professor at Yale University. He didn't do himself any favors.

Meanwhile, Biden's campaign was in trouble. There were questions being asked about whether his slip-up with the Kinnock speech was part of a pattern, whether it said something about Biden's character.

Biden went out and defended himself. "You'll all be the judge and the people will be the judge," Biden said in a press conference that was at turns combative and sarcastic. "I think this is much ado about nothing."

He insisted he had done nothing wrong, but also said he would certainly remember to attribute the quotes to Kinnock in the future.

"Shouldn't have made much difference anyway," Harry Reid, the former Senate majority leader, said in an interview with NPR. "But you guys, the press, jumped on him."

Reid was a relatively junior Democratic senator at the time. But looking back, he said Biden did what he had to do.

And that's exactly what Biden did. On Day 8 of the Bork hearings, he announced his campaign was over.

In a way, the Bork hearings allowed Biden to save face while quitting the race. He didn't have to stand there and say he was dropping out because of the plagiarism charges. No, he had something important to do.

"This country's going to be lifted up and I'm going to play a big part in doing it," Biden said, referencing a refrain from his stump speech. "But for now folks, gotta go handle the Bork hearings."

At some point during that difficult day, Biden called the Judiciary Committee members together behind closed doors. It was a gut check.

"It was devastating," said Alan Simpson, then a Republican senator from Wyoming. "He was ambitious, as he is now, and he was running for president of the United States. And he was quite filled with angst."

Simpson says Biden told them he was embarrassed and hurt, but took responsibility, that the "buck stops" with him. Biden offered to resign his chairmanship, Simpson said, if he had embarrassed the committee in any way.

There was silence in the room.

"And then old Strom Thurmond, who was ranking member, leaned over and slapped his knee and said, 'Oh, Joe, now let me tell you, just forget that stuff,' " Simpson said, adopting a Southern accent in an impression of the late South Carolina senator.

By Simpson's telling, the senators went around the room talking about all the mistakes they had made over the years and had a good laugh.

Biden had long known that trying to run the Bork hearings while running for president might end badly, said Mark Gitenstein, a longtime Biden friend and adviser who was then chief counsel on the Judiciary Committee. He remembers a contentious meeting Biden attended with civil rights leaders about the Bork nomination where they asked him: "Which is more important, your presidential race or the Supreme Court fight?"

In Gitenstein's retelling, Biden said, "Without a doubt, Supreme Court fight. I'll give up my presidential race if necessary to win this fight."

The meeting happened months before the Kinnock controversy broke, said Gittenstein. "And of course ultimately that's what happened." 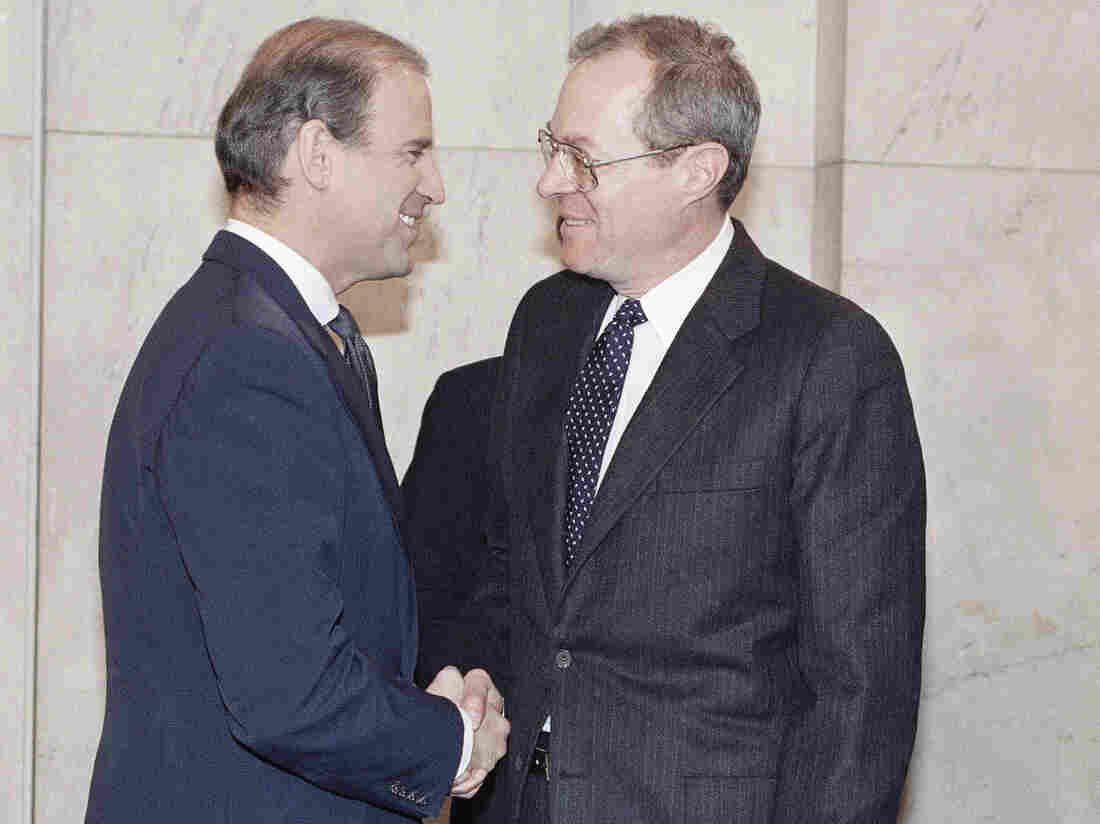 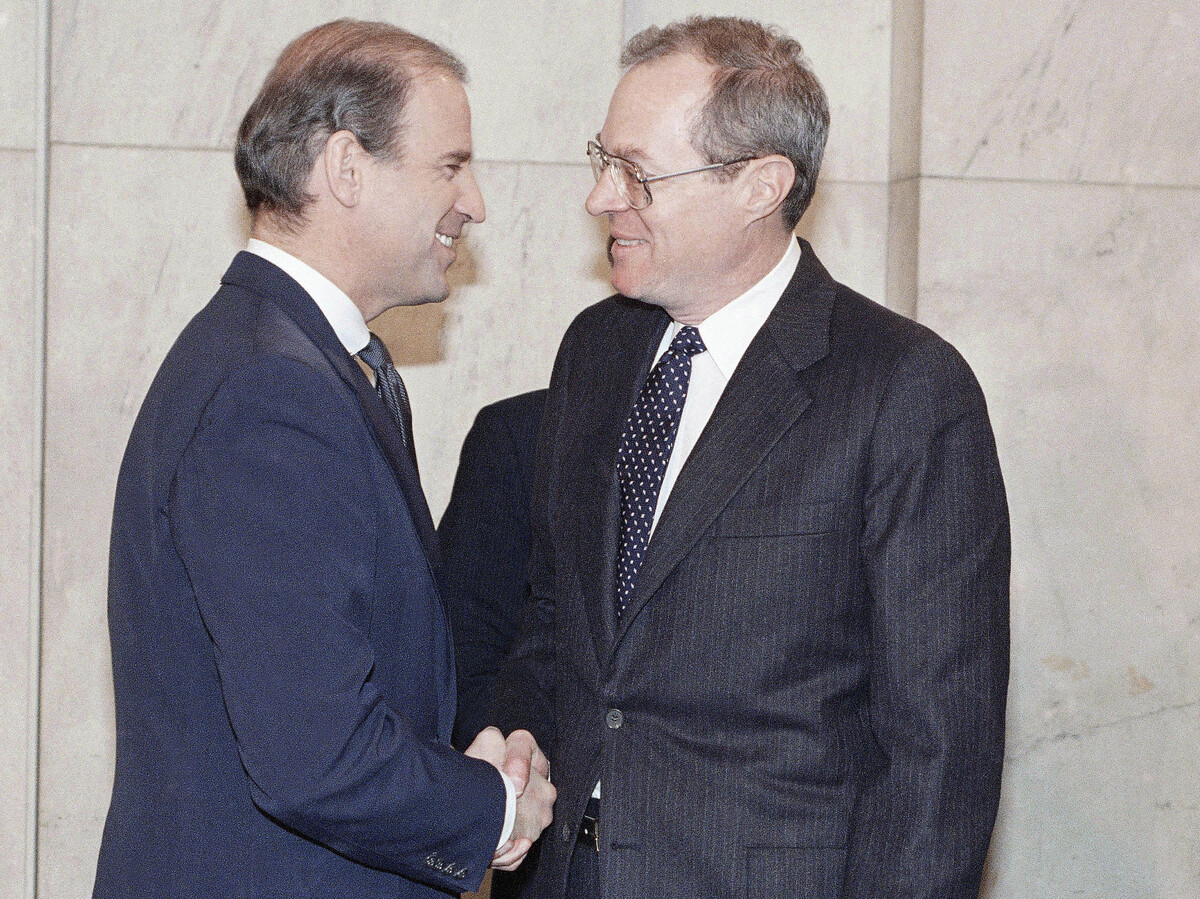 After Biden ended his campaign in the press conference, he went back to the hearing room and swore in the next witness.

"Look, my business is behind us. Let's move on," Biden said after a couple of Senate colleagues piped up to offer him support.

Ultimately Bork's nomination failed in the Senate. It was bipartisan. Biden was able to sway a handful of moderate Republicans to vote with Democrats against Bork.

Reagan went on to nominate Anthony Kennedy for that Supreme Court slot. Over his generation on the court, Kennedy became a swing justice. And when it came time for the next president, George H.W. Bush, to nominate a justice, he picked David Souter because he was less ideological, with less of a paper trail than Bork, in hopes that he would be able to get get bipartisan support.

Gitenstein argues Biden was able to do more for progressive causes by sinking Bork than he would have been able to do as president.

"It shaped the court for 30 years on everything from saving Roe vs. Wade to, you know, the gay marriage issue," Gitenstein said.

And, as Biden said the day he quit the race, there would be other presidential campaigns, and he would be there.