Accessibility links
Trump Impeachment: There's No Endgame In Sight What trophy can be said to await the speaker or her party at game's end? Their case has not penetrated the popular membrane enough to supply the two-thirds vote required for conviction in the Senate. 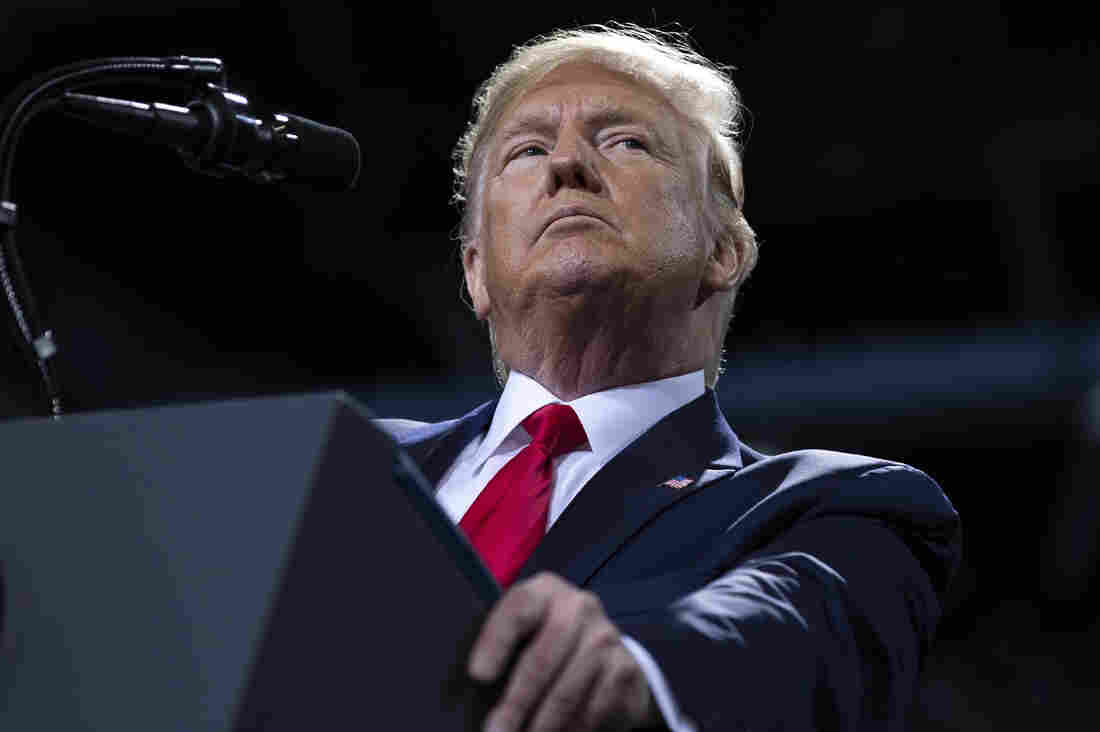 President Trump speaks during a campaign rally in Michigan, where he came out swinging as the House voted to impeach him on Wednesday. Evan Vucci/AP hide caption 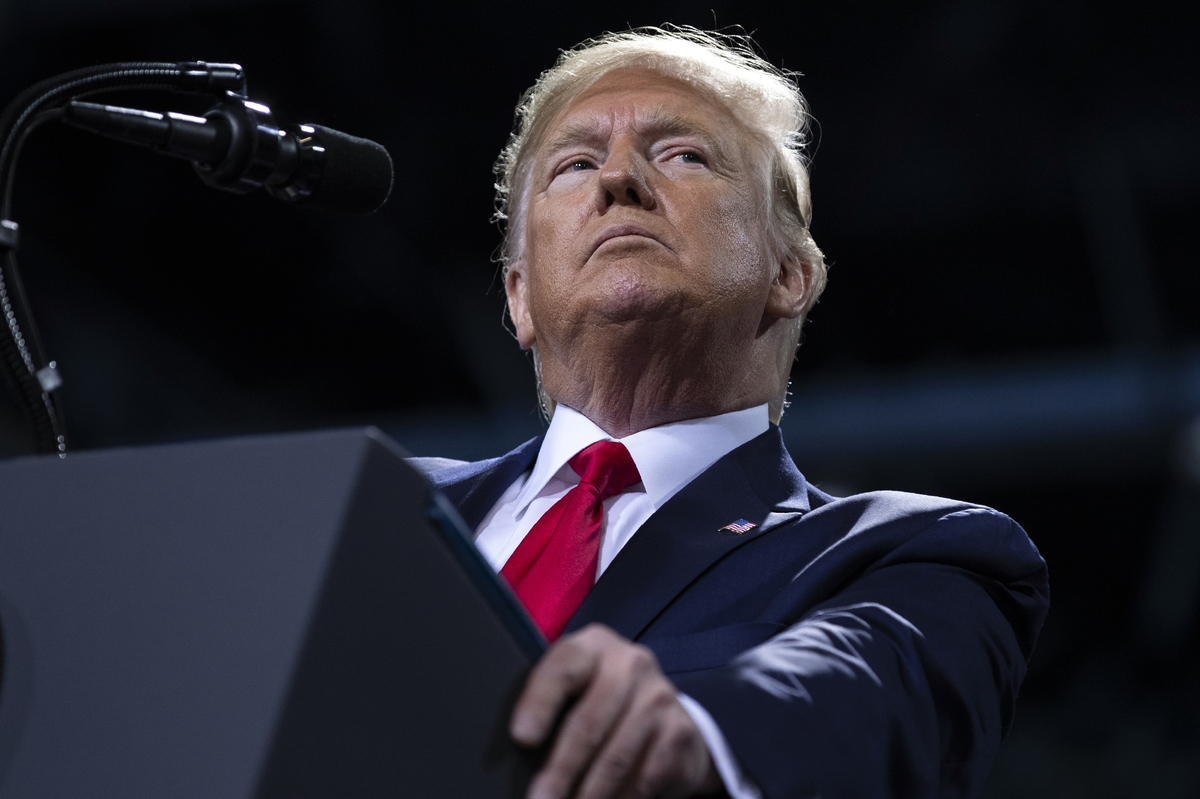 President Trump speaks during a campaign rally in Michigan, where he came out swinging as the House voted to impeach him on Wednesday.

When it was announced Wednesday night in the House of Representatives that all of the time allotted for debate on impeachment had expired, a cheer went up within the chamber. After a dozen hours of rancor and wrangling, there seemed for a moment to be an end in sight.

The spirit of that cheer was generally shared by the nation at large. But alas, that night, there would be closure only for the House and not the nation.

And soon enough, it became clear that even in the House, the process was still unfinished. The two articles of impeachment against President Trump, relating to delayed aid to Ukraine and subsequent investigations into why, were not delivered to the Senate by the time both chambers left town for the holidays. The "House managers" who will go to the Senate to serve as de facto prosecutors of the impeachment case have yet to be named. Even the presumption of a trial beginning soon in January is now less certain.

House Speaker Nancy Pelosi held up the formal process of notifying the Senate so as to negotiate, directly or indirectly, the parameters of the trial to be held there. Senate Majority Leader Mitch McConnell had already declared he was coordinating plans for that trial with the White House and proclaimed himself "not impartial at all" as a juror about to deliberate on the fate of the chief executive. Negotiations with his Democratic counterpart, Chuck Schumer of New York, were at a standstill.

So the holiday break began with the cloud of impeachment over the Capitol still hanging so low as to be ground fog.

All sides expect it to lift soon enough for some form of trial in the Senate to go forward early in 2020. But what then?

What trophy can be said to await the speaker or her party at game's end?

The case against the president, however strong in the assessment of hundreds of lawyers and historians, has not penetrated the popular membrane of resistance to the idea of impeachment.

The polls show the country divided more or less evenly on the question. That is far more support than the 30% approval the House had for impeaching President Bill Clinton in 1998. But it is not sufficient to produce a two-thirds majority for conviction in the U.S. Senate as required for conviction and removal of a president.

What comes next is 2020, a presidential election year likely to be unlike any other. The question of this president's guilt or fitness moves on to the voters and the ballot box. None of the three presidents who have been subject to impeachment proceedings in the past had been prospects for re-election. So having the voters as the ultimate deciders is unprecedented.

How will impeachment affect the president's prospects of reelection? No one knows for certain.

It has been said the president will always carry the impeachment as a mark. Some call it a stain, some a mere asterisk. Whichever it is, it would be substantially erased by reelection.

But how will the intervening year look and feel as it unfolds? One early suggestion may come on Feb. 4, when Trump is slated to deliver his State of the Union address before a joint session of Congress. By then, if the Senate has voted as expected, he will be able to proclaim himself exonerated. But he will also be facing a Congress in which a slight majority of all the members seated before him will have voted to have him removed.

That faceoff offers a metaphor for the awkward election season to come. The president may sense that a Senate acquittal not only exonerates him but also unleashes him.

After all, neither a lengthy probe by special prosecutor Robert Mueller into Russian interference in the 2016 election nor an actual impeachment in the House has stopped him or even slowed him down. He once said he thought Article II of the Constitution allowed him to do whatever he wants. In a few weeks, he may have all the more reason to think so.

The president will surely still have his critics, in official Washington, the news media, social media and the electorate itself. But with all the legal restraints of our system having proved unavailing and with an attorney general in William Barr endorsing the most robust theories of executive power, the president may well feel himself empowered as never before.

He would surely feel emboldened by the loyalty of his support in Congress and among those who put him in office and continue to approve his performance. All indications are that impeachment has only served to strengthen this bond and energize these voters.

We do not lack for examples of what the unleashed Trump can do. On the night of impeachment, speaking at a rally in Battle Creek, Mich., Trump went after Rep. Debbie Dingell, D-Mich., whose husband John Dingell died this year after serving in Congress longer than anyone else in history. Angered by the widow's vote for impeachment, Trump said Dingell might not be looking down from heaven these days but "looking up" — a suggestion that brought groans among the cheers and catcalls. Several Republican members from Michigan and elsewhere called on the president to apologize.

The next day the president was enraged by one particular editorial supporting his removal from office. There have been many of these in newspapers across the country, but this one appeared in the evangelical magazine Christianity Today, founded by evangelist Billy Graham. Taking to Twitter, the president denounced "ET" and said the "Graham family" had nothing to do with it anymore.

In the days ahead, will the president tweet comments on his continuing trial in the Senate? Will he continue his pursuit of foreign governments' assistance in winning a second term?

Though unchallenged within his base, the president is at risk if his excesses are unceasing. The central question of 2020 is the degree to which Trump unleashed may become an incumbent imperiled.