Accessibility links
'Authenticity,' 'Culturally Relevant': Why Bernie Sanders Is Resonating With Latinos Part of Vermont Sen. Bernie Sanders' resiliency this campaign cycle is thanks to his popularity with Latinos. Multiple polls show Sanders leads the field with Latino support.

'Authenticity,' 'Culturally Relevant': Why Bernie Sanders Is Resonating With Latinos

'Authenticity,' 'Culturally Relevant': Why Bernie Sanders Is Resonating With Latinos 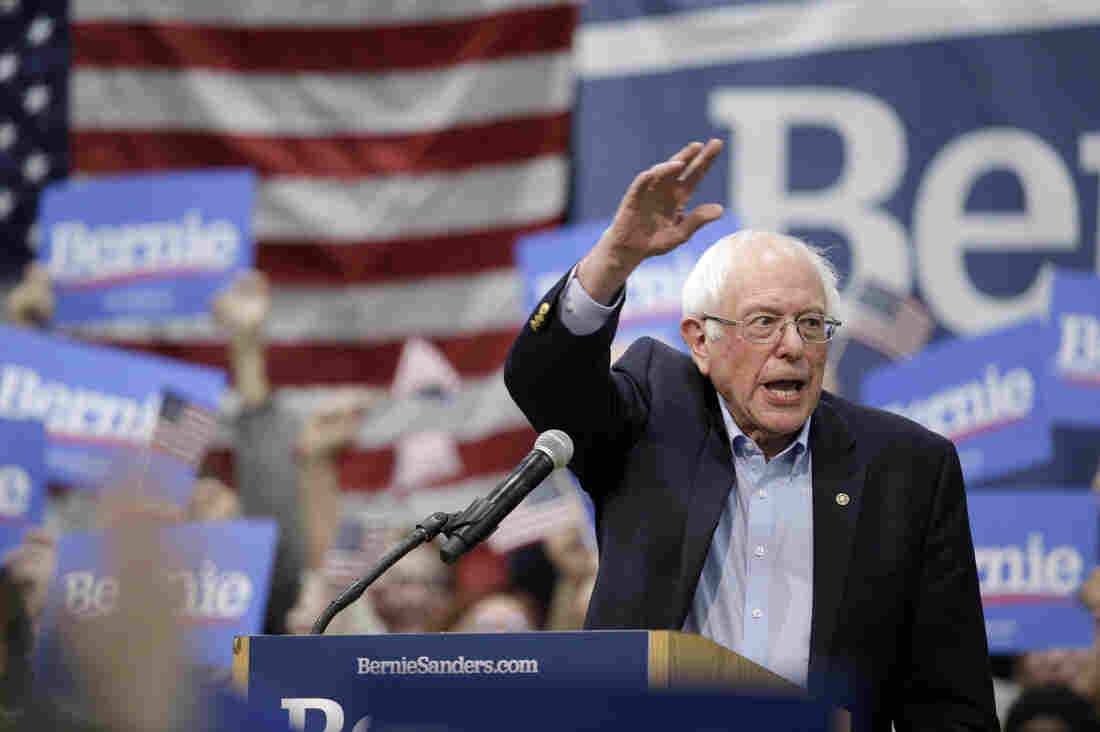 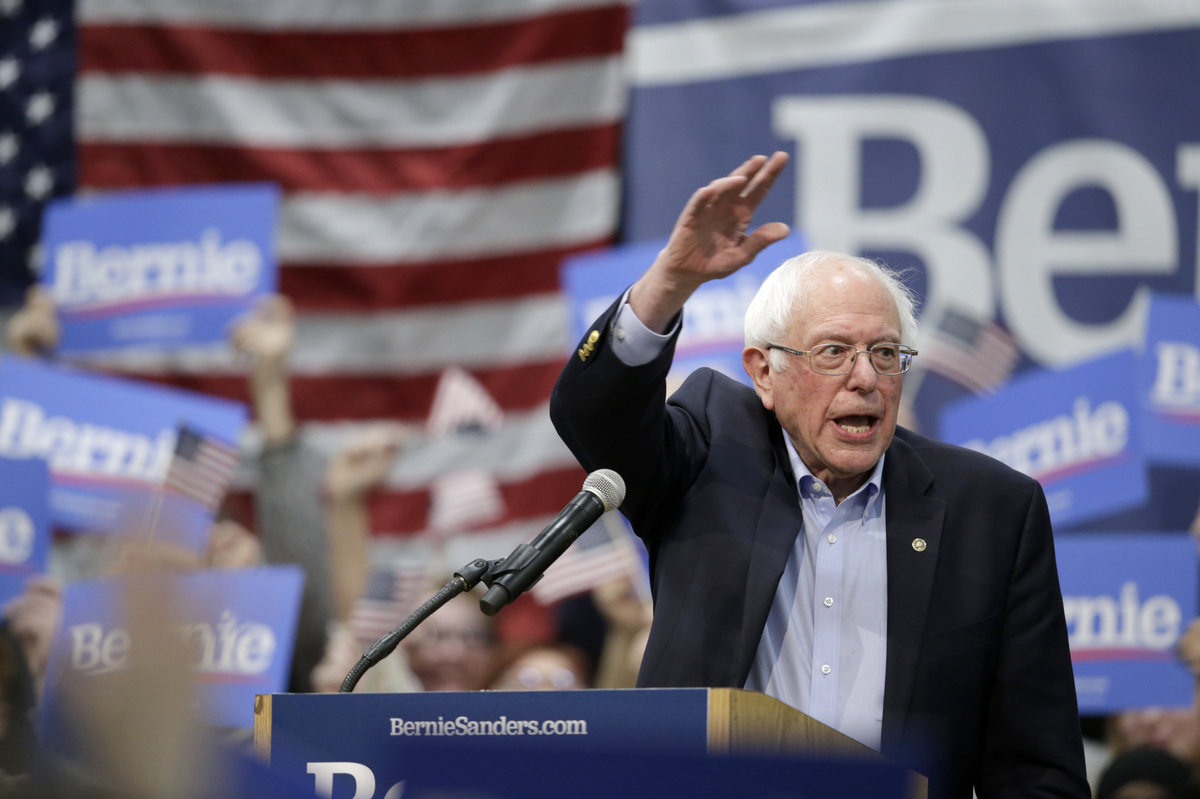 Sen. Bernie Sanders, I-Vt., speaks to supporters at an Iowa rally in March.

This weekend, one of the most high-profile Latinas in Congress, Rep. Alexandria Ocasio-Cortez, is campaigning for Bernie Sanders in Nevada and California.

Recent polls by the Los Angeles Times, The New York Times and Latino Decisions all show Sanders as the top Democratic presidential candidate choice among Latino Democrats. He has a particular strength with young Latinos.

The story of how a man who represents one of the whitest states in the country — Vermont — came to resonate with the largest nonwhite eligible voting block in the country is multifaceted.

Interviews with Sanders' campaign staff, volunteers, voters and activists in the key early voting state of Nevada point to a few consistent factors that explain the senator's popularity: his consistency on jobs and health care, his progressive immigration plan, his campaign outreach in Latino neighborhoods, his appeal with young people broadly (the median age for Latinos in the country is 28) and the intentional hiring of Latino staff (his campaign says it has more than 100 Latino staffers across the country).

"He reminds us a lot in the Latinx community of your grandpa, or your tío," explained Navarro after a recent Spanish-language campaign event in Nevada. "He's kind of stern, a little grumpy at times. But, at the same time, you really know he's looking out for you."

Latinos, Navarro says, are tired of listening to talking points from Democrats who come to their neighborhoods, "speak a little bit of Spanish" and "eat tacos," but then don't deliver any real results. It's why, he says, exit polls found that Donald Trump and Mitt Romney, "who was far less offensive," performed roughly equally with Latinos in the 2016 and 2012 elections.

"There is a huge distrust among the Latinx community with the Democratic party that they're not following through on their promises," Navarro said. "Bernie is the exact opposite. He has a real authenticity."

It's a point many Sanders supporters echo.

Risky strategy, with an upside

Early in this campaign cycle, a common narrative emerged in which Joe Biden was seen as the clear frontrunner for a generic group dubbed "voters of color." In reality, the former vice president has a groundswell of support with African Americans, but his support with Latinos is far shakier. Although Biden has a clear polling advantage with Latinos over the age of 50 and has received high-profile endorsements from lawmakers within the Congressional Hispanic Caucus, Sanders has also fiercely courted Latino voters on the ground.

Months ago, his campaign manager Faiz Shakir told NPR he sees Latinos as a key constituency in building a winning coalition.

Matt Barreto, co-founder of the polling firm Latino Decisions, says Sanders' strength with Latinos is driven by voters under the age 30.

"But he also does pretty well with Latinos age 30 to 50," Barreto added. "Latinos are the youngest population in the United States. That's where a bulk of the Latino electorate is, and so focusing on those younger voters is a smart idea."

But it's also a risky strategy — based on the assumption that Sanders can turn out young voters en masse and translate that support to their parents and grandparents.

But it's also a strategy with potentially a huge upside for Sanders — it could help him put a dent in Biden's path to the nomination.

Latinos have a more influential role in the primaries this year because of the way the calendar is drawn. The two most populous states in the country — California and Texas — vote on the first Tuesday in March. And in both states, about 40% of the population is Latino.

"Meeting Latinos where they are"

Activists in Nevada say the Sanders campaign actively began field operations in the state earlier than many rival campaigns. Even those who are not endorsing Sanders acknowledge the strength of the senator's operation. They say they've personally witnessed his campaign working in predominantly Latino neighborhoods for months.

"We are seeing them meeting Latinos where they are ... knocking on their doors, you know, going to places where they're shopping," said Cecia Alvarado, the Nevada state director of Mi Familia Vota. The group is not endorsing a presidential candidate, but has opened its office as a meeting space to all of the candidates.

"The most active at the moment is Sen. Sanders," she added.

Benjamin Garcia, a day laborer who also works on immigration issues with the group Arriba Las Vegas, says Sanders is the only candidate he has consistently received campaign literature from in the mail.

Garcia, who spoke in Spanish at the Arriba storefront office, said he's focused on finding a candidate who aligns with his priorities on immigration. Behind him as he spoke were posters that declared "not one more deportation" and "protect TPS."

"With Sanders, I feel that he's seeing us an immigrant community and listening to us," said Garcia. Sanders first met with the group in October. The group has also met with Elizabeth Warren, Cory Booker and Julian Castro, but has not endorsed a candidate.

Bliss Requa-Trautz, the director of Arriba, said voters are frustrated with the lack of congressional action on immigration. And perhaps part of Sanders' appeal to some of her members is that he's promising change through liberal executive action, rather than traditional congressional legislation.

Sanders immigration plan calls for a slew of sweeping changes, including, notably, a moratorium on all deportations and a stop to the construction of a border wall. He also promises to use executive authority to allow all undocumented immigrants who have lived in the United States for at least five years to remain in the country with no threat of deportation. And he intends to break up Immigration and Customs Enforcement.

Biden differs — he has not endorsed the idea of decriminalizing the border or halting all deportations.

It's a shift from the more centrist political debate in the Democratic party and even a shift from Sanders own views on immigration. In 2007, he voted against a comprehensive immigration bill, siding with labor unions over concerns about a guest worker program in the bill.

But it goes further than many other candidates in protecting undocumented immigrants and might help explain his growing appeal with Latinos.

Trying to be "culturally relevant" 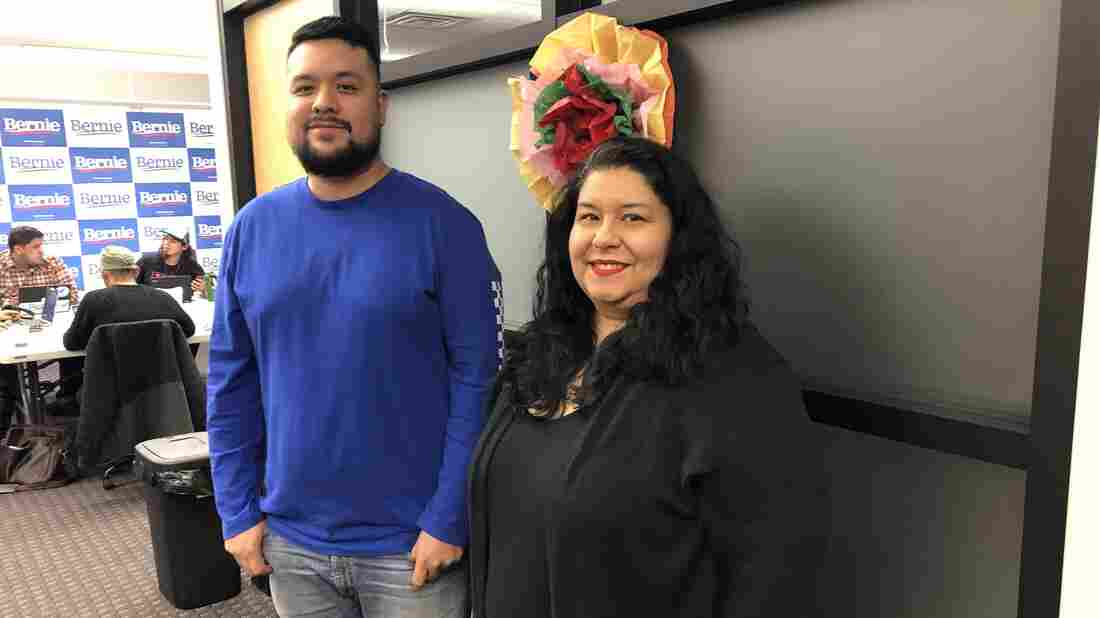 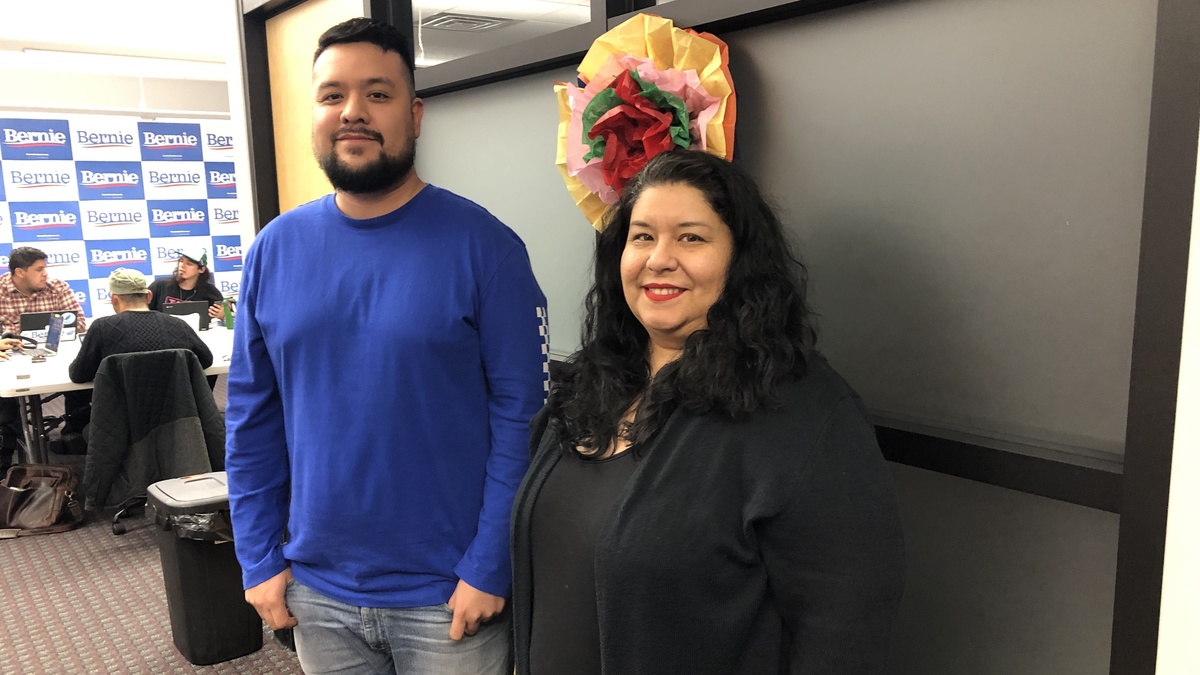 The first office Sanders opened in Nevada was in East Las Vegas, a predominantly Latino section of the city.

On a recent Sunday evening at the office, volunteers dialed potential caucusgoers, fluently switching their pitch between English and Spanish.

"[It] gives a unique perspective and understanding about how to campaign and how to do it differently," said Cervantes. She says the campaign uses traditional campaign tactics, such as phone banking and canvassing. But it's also consciously trying to be "culturally relevant."

"For example, we had a día de los muertos event where we had games for the kids [and] we played the movie Coco," Ramirez said.

Barreto with Latino Decisions says it's not surprising to see Sanders doing well with Latinos.

"And the reason is if you go to the start of his 2020 campaign, he brought in a number of high profile and senior advisers to his Latino campaign," he said.

According to Barreto, staff diversity has been key to Sanders' success. He recalls how Sanders was widely criticized in 2016 for running a class-focused campaign that, at times, overlooked race/culture. This time, the Vermont senator is running a campaign that tries to include immigration and race within its broader economic message.

But more than policy, Barreto thinks Latinos are looking for a candidate they can trust. It's about familiarity.

"It really is a lot about positioning yourself, making yourself look welcoming, open," he said.

That is why, he says, Sanders and Biden are the top two choices for most Latino voters.