Accessibility links
Boeing's Starliner Lands Safely Back To Earth After Aborted Space Mission The journey is being hailed as a major achievement despite failing to complete a core objective: docking at the international space station. NASA hopes to launch U.S. astronauts in space in 2020. 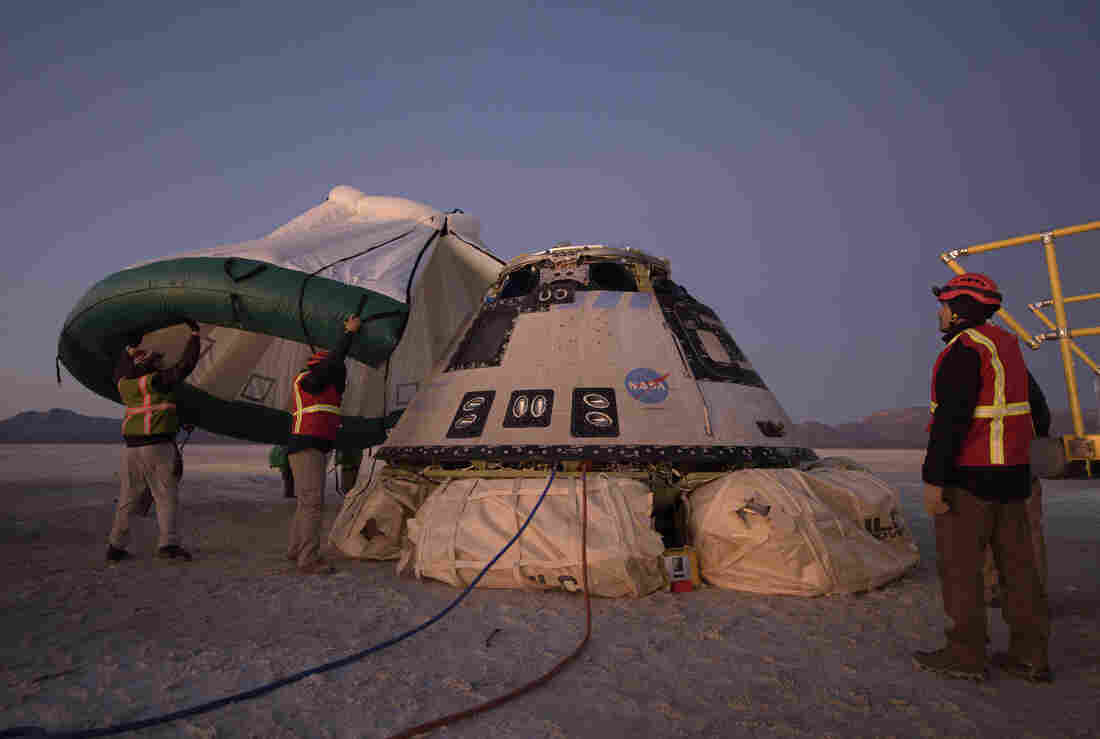 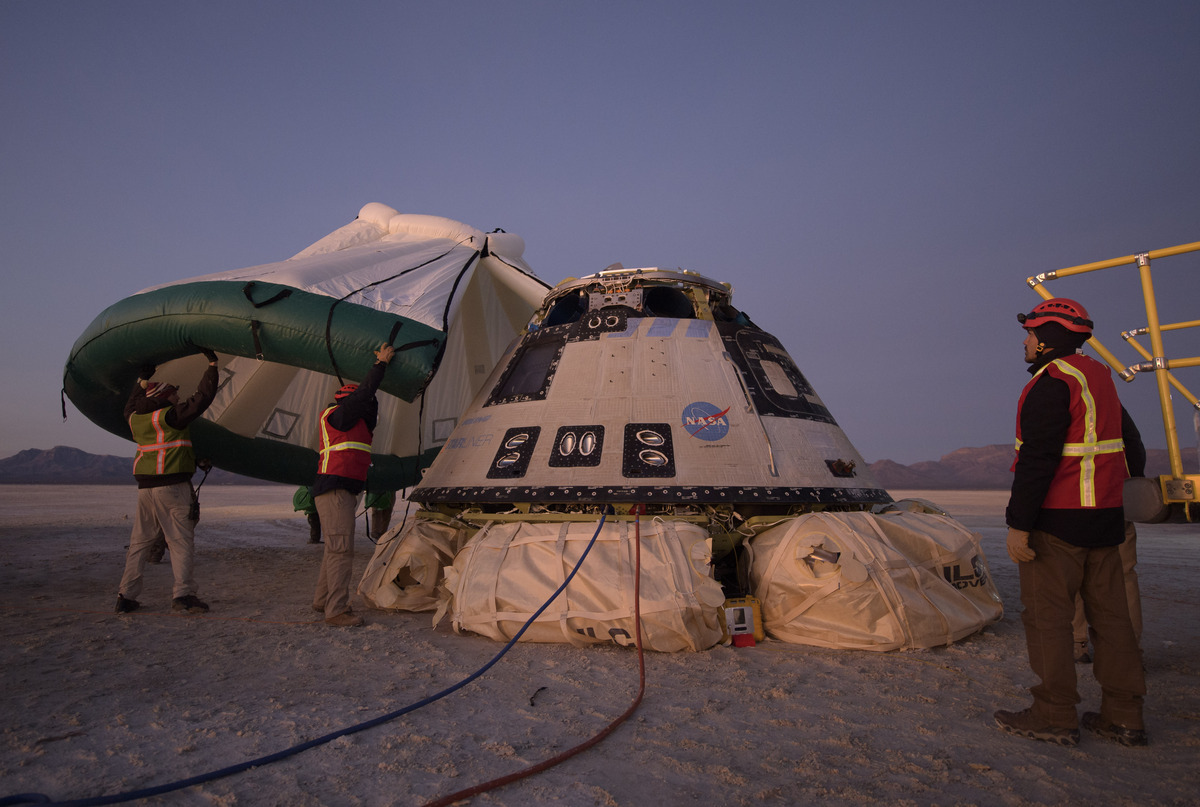 The journey is being hailed as a major achievement despite failing to complete a core objective: docking at the international space station.

Engineers and scientists are now analyzing data from the trip ahead of a plan to send U.S. astronauts to space in 2020. It would mark the first American-launched space travel since NASA retired its space shuttle fleet in 2011.

The Sunday landing of the test flight – which did not include any crew members – concluded with three red, white and blue parachutes opening up and gliding into the Army's White Sands Missile Range. 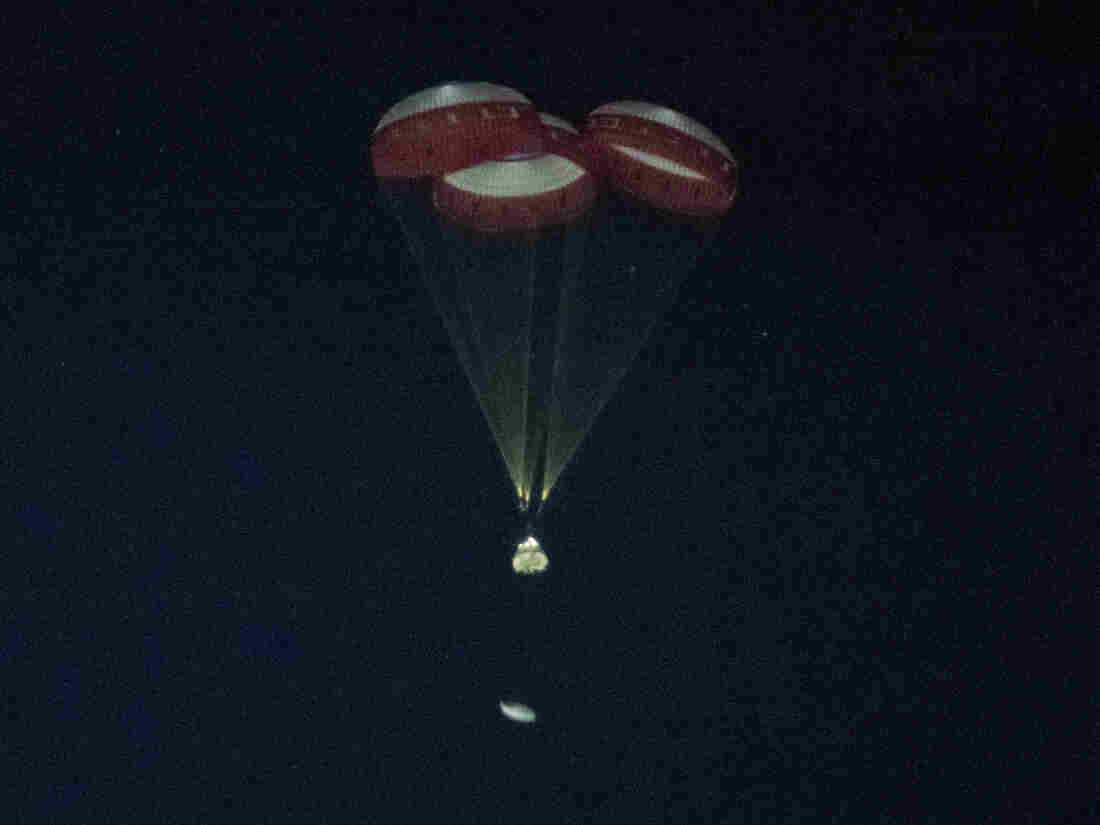 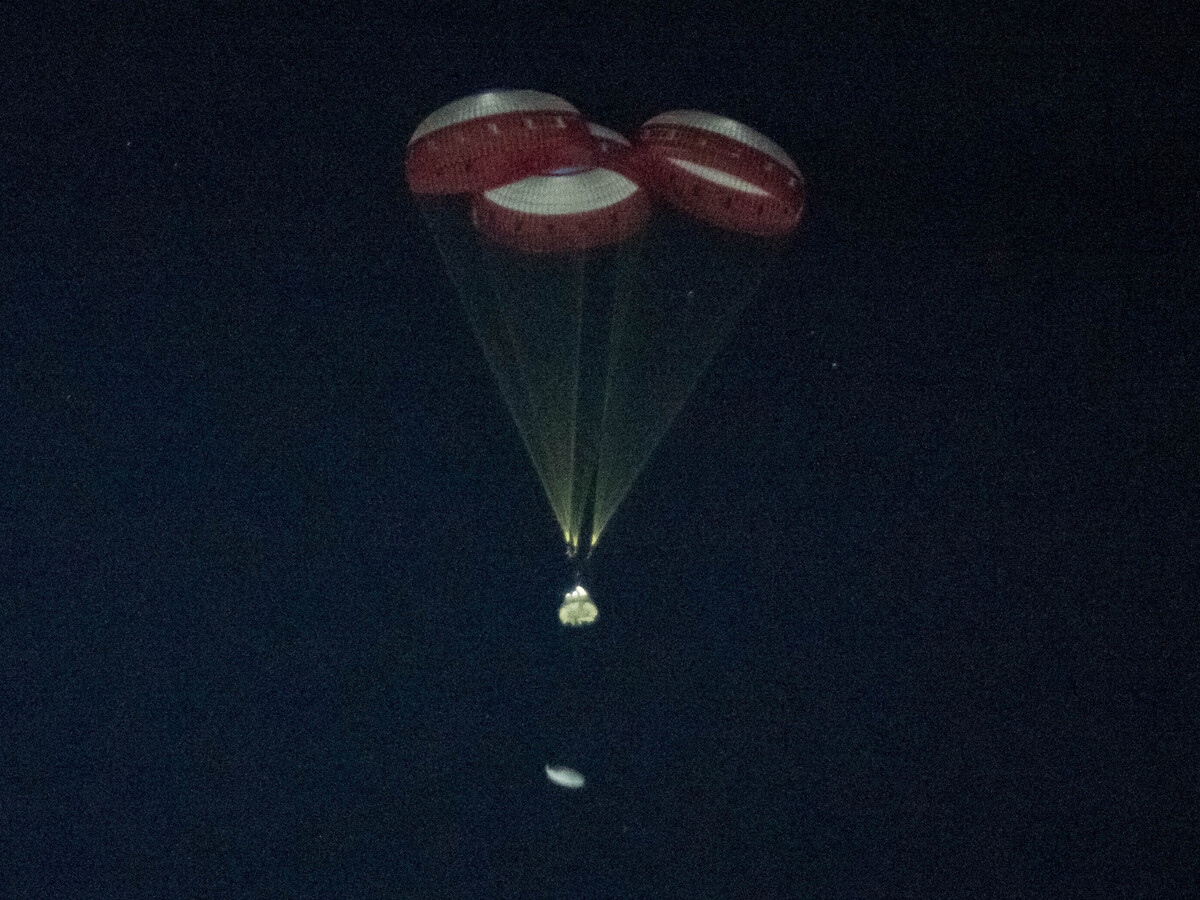 The Boeing CST-100 Starliner spacecraft jettisons the heat shield before it lands in White Sands, N.M. on Sunday.

It, however, did not go without a hitch.

The capsule was carrying holiday presents, clothes and food, cargo that was supposed to be dropped off at the International Space Station.

Because of an internal clock snafu that made the spacecraft operate as if it were at a different point in its journey, it went on the wrong orbit and never docked at the space station as planned.

Nonetheless, NASA Administrator Jim Bridenstine said the test flight was an overall success — including a rare ground landing. All other U.S. capsules have ended in the ocean.

"We did not make it to the International Space Station. We did not dock. But the space craft flew exceptionally well, and then of course, we brought the spacecraft home, for the first time landing a capsule on land in the United States," Bridenstine said at a briefing on Sunday morning. "We have not done that as a nation before. We have now done it."

Now, the big question is whether NASA will require another test flight before sending crew members to space on Starliner.

"Had everything gone according to plan on this flight, we still wouldn't be saying that we would be ready to put humans on it at this point," Bridenstine said.

"We have to make sure we test the data, and there's going to be a lot of reviews going on for weeks, months, in front of us before we're comfortable saying we're putting human on there," he said.

A test dummy named Rosie the Rocketeer after the iconic bicep-flexing female factory worker with the red bandana was in the commander's seat of Starliner. The dummy was outfitted with sensors to capture what astronauts would experience during a launch and landing.

"From an overall perspective, we are just as pleased as we can be," said Jim Chilton, senior vice president of Boeing's Space and Launch Division. "Rosie the Rocketeer, she lived in air conditioned splendor for the last couple days," he said.

Aborted holiday mission aside, the 50-hour mission that included 33 orbits around Earth hit about 90% of its test objectives capped by "an absolute bullseye" landing, Bridenstine said.

The capsule took off from Cape Canaveral on Friday, but quickly ended up in the wrong orbit, eventually missing the space station. Had it made it, the plan was for the vessel to dock, open its hatch to deliver the presents and to power down for days.

Officials were able to course-correct the Starliner and reset its clock, but the digression had spent so much fuel, that it could not attempt to dock at the station again.

I’m so grateful for the incredible people that made this mission possible. The @NASA, @BoeingSpace and @ulalaunch teams working together through challenges and successes was truly an amazing thing to watch. I am so proud of everyone involved. #GoStarliner!! pic.twitter.com/7cXEDAQBc8

While what exactly caused the Starline's internal clock to malfunction is still being studied. Boeing and NASA officials say the spectacle of a space station docking should not detract from all the tests the capsule was able to complete.

"We tested just about all the systems on the vehicle," Bridenstine said. "We tested the vehicle's ability to do maneuvers. We did several of those on the flight. We tested all the thrusters."

The Starliner is a reusable spacecraft. Officials say it is built to take 10 flights to space.

NASA has hired Boeing and SpaceX to develop space transportation to send astronauts in orbit. And though both companies have encountered setbacks and delays, the SpaceX Crew Dragon had a successful ocean landing in March, the first successful splashdown of a capsule designed for humans in nearly 50 years. But a month later, the capsule exploded during an engine test.

Eventually, the Starliner and Dragon capsules are expected to be the mode of transportation for U.S. astronauts heading to the International Space Station.